Several states had already expressed their inability to allow people between the ages of 18 and 45 get the doses immediately. People queue up to receive their COVID-19 vaccine in Surat, May 1. Photo: PTI

New Delhi: India’s move to allow all adults to get vaccinated began with hiccups and confusion, as many people between the ages of 18 and 45 were unable to book slots or were turned away at hospitals even after booking one.

These hiccups do not come as a surprise, as several state governments had already said there will be a delay in implementing the expansion.

According to news reports, some state governments flagged off the expansion in a few districts. In Uttar Pradesh, the government allowed seven districts that have more than 9,000 active COVID-19 cases to vaccinate people between the ages of 18 and 44.

In Gujarat, the drive began in ten districts – Ahmedabad, Surat, Vadodara, Rajkot, Bhavnagar, Jamnagar, Kutch, Mehsana, Bharuch and Gandhinagar districts – which are most affected most by the pandemic. The drive was launched in a limited number of districts as the state has received only three lakh doses of the 2.5 crore it has ordered.

Slots were booked out almost immediately in these areas, with the Co-WIN website showing no vacancies. 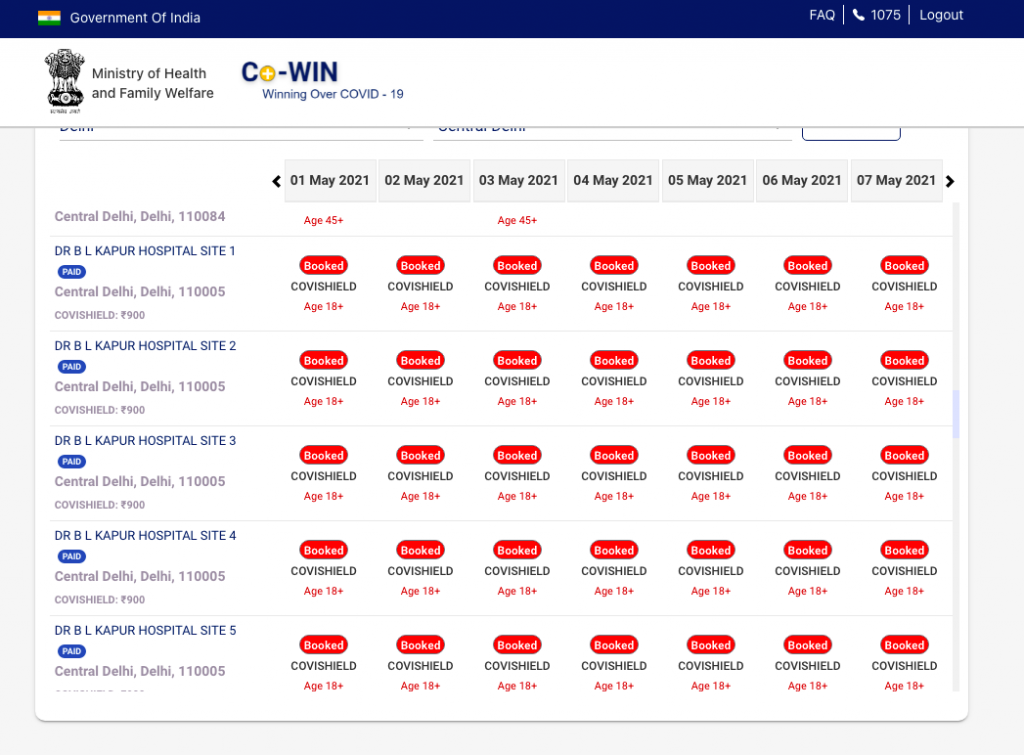 According to some, even after booking a slot, the hospital turned them away because vaccines were not available.

In other cases, citizens disputed the government’s claims. When the Jammu and Kashmir administration tweeted that it was beginning universal vaccination in a phased manner, beginning with Jammu and Srinagar districts, a Twitter user said slots were not available in Jammu.

When The Wire verified the claim on the Co-WIN portal, it found one vaccine enter offering doses to everyone above the age of 18. Slots were only available on May 1 and were fully booked.

Better to put it on the CoWIN website first than to announce it. No 18+ vaccine slots are available for the Jammu region. @dcjammuofficial @OfficeOfLGJandK @diprjk

In Karnataka, chief minister B.S. Yediyurappa made a ‘symbolic start’ of the inoculation drive for all adults, where a few people were administered doses available with the state. He said the shortage of vaccine in the state will be sorted out in the next three days.

According to the Indian Express, the Pune Municipal Corporation has decided to temporarily shut vaccination for those above 45 years of age until it receives adequate supply. It planned to inoculate 350 persons between the ages of 18 years to 44 years in two civic hospitals – Kamla Nehru hospital in Mangalwar Peth or Rajiv Gandhi hospital in Yerawada between 11 am and 4 pm – on the first day of the third phase.

In many states, the drive did not begin at all. In Telangana, photos showed hospitals putting out boards which said there were no vaccines available. 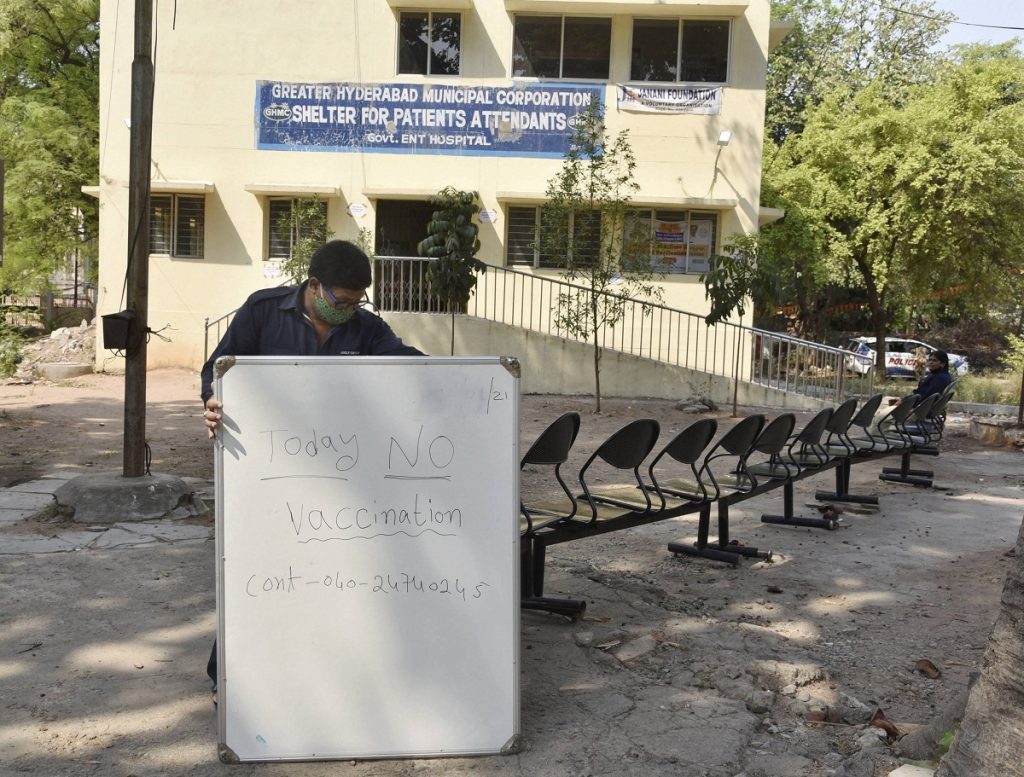 A health worker puts out a board which says no vaccines are available near the Government ENT Hospital in Hyderabad, May 1, 2021. Photo: PTI

The drive also did not begin in Assam as the state did not receive vaccines from the Centre. The process for the third phase of vaccination, as part of the nationwide drive to inoculate younger people, “will commence from the moment the corresponding number of vaccines are received from the Government of India”, National Health Mission director S. Laxmanan told news agency PTI.

At private hospitals too, there was confusion. Large hospital chains such as Apollo, Yashoda, Fortis and Max had said they would begin universal adult inoculation at ‘select centres’ in a few cities. The hospital chains will provide Covaxin at a cost of Rs 1,200-1,250 per dose and Covishield at around Rs 800-850 a shot, including the cost of administering the doses and GST.

While Apollo said it would begin the drive in Kolkata and Hyderabad, The Wire was able to confirm that this did not happen in the southern city. In Kolkata, the Co-WIN portal did not show Apollo offering any doses.