Running a Marathon Is Great for Your Heart – Until it Isn't

It's unadvisable to participate in too many marathons because the heart may be damaged in a few. And current scientific knowledge is unable to accurately identify the vulnerable. 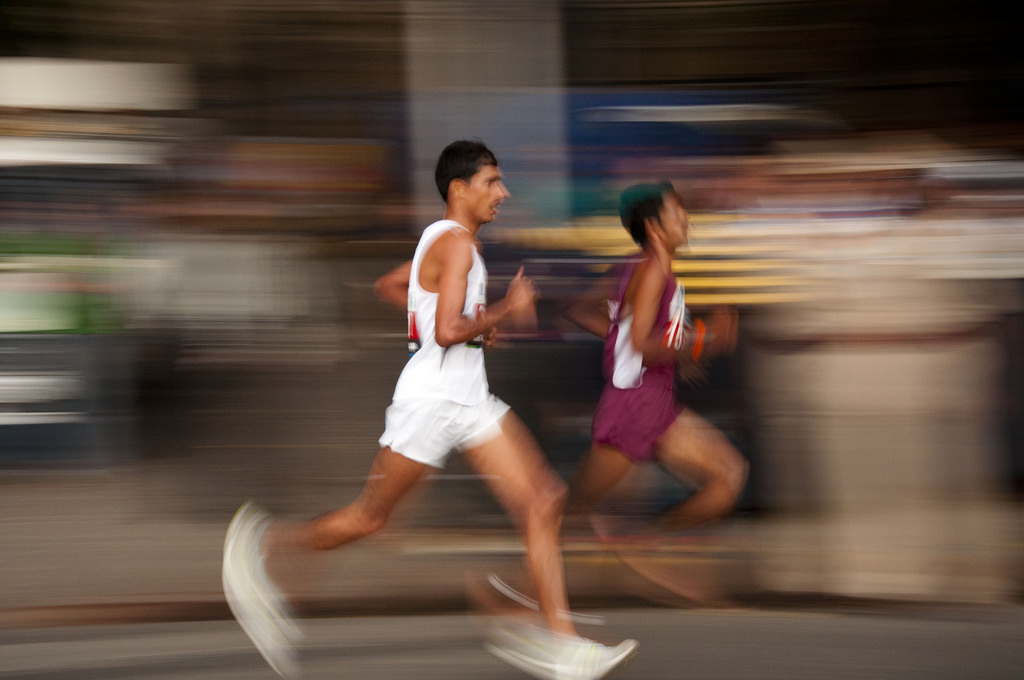 Hundreds of thousands of runners participate in marathons around the world. Most are not elite runners but are embracing the event for personal goals. Credit: Joe/Flickr, CC BY 2.0

In the din of demonetisation and its changing goal posts, the death of one of the best gynaecologists of Mumbai went largely unnoticed. True to form, the print and electronic media hardly raised a whisper on why a middle-aged man who had run numerous marathons, and who regularly ran 10 km every morning, collapsed and died whilst happily engaged in his morning run. No serious commentary has emerged on the tantalising reasons for the untimely death of a seemingly superbly fit leading doctor.

Physicians have for decades advised exercise as being the  best antidote for preventing ill health, apart from statins, ACE inhibitors and beta-blockers. The Potsdam study unequivocally demonstrated that a healthy life consisting of moderate exercise and decent diet substantially cut down the risk of heart attack, stroke, diabetes and even cancer. And marathon-running was considered by researchers to be the best defence against atherosclerosis.

A study on almost 11 lakh marathoners over a decade revealed only 59 deaths among them during its performance – a remarkably small mortality rate for one of the most of demanding sports. More deaths occurred in males while 50% of participants died in the last one mile of the race. The very reassuring takeaway is that, despite the rigour of running 42.195 km, most young and middle-aged adults can handle the stress well. Hundreds of thousands of runners participate in marathons around the world. Most are not elite runners but are embracing the event for personal goals.

Exercise’s effect on the heart and arteries

The cardiovascular benefits of endurance exercise include improved endothelial function, increase in coronary reserve, greater tolerance of myocardial ischemia, raised ventricular fibrillation threshold, reduced blood pressure and better elasticity of blood vessels. In other words, exercise makes the ability of the heart to endure exercise more efficient by improving oxygenated blood flow, more capable of withstanding dangerous rhythm problems and lack of oxygen for prolonged periods. It has been observed that regular endurance exercise alters structural and functional elements of the heart. Middle-aged amateur marathon runners ramp up their cardiac output from a normal 5 litres per minute to 20-25 litres per minute for two to four hours.

These prolonged phases of stress lead to both dilatation and a thickening of the walls of the heart’s chambers. There could be potentially adverse changes in the coronary arteries, the electrical conduction system and even scarring or fibrosis of cardiac chambers.

Two-dimensional Doppler echo studies conducted soon after running a marathon have shown diastolic dysfunction (or increased stiffness of the heart) in middle-aged participants. Stiff hearts are not uncommon in middle-aged and elderly people with hypertension. It results in diastolic heart failure or “heart failure with preserved ejection fraction (HF-PEF).” There is, however, improvement in left ventricle diastolic function (a.k.a., heart stiffness).

In endurance-trained athletes in the long run, cardiac biomarker levels (troponin and BNP) are increased after a marathon to come down to normal values in 24-48 hours without any clinical significance. Troponin and BNP are biomarkers that are released in the bloodstream after damage of heart muscle and in heart failure. Magnetic resonance imaging has failed to detect myocardial necrosis despite raised troponin levels, indicating that damage to heart muscle is so minute that it is undetectable by the most sophisticated imaging technique available to us.

Long-term endurance exercise training makes larger arteries, which are helpful in providing more oxygenated blood during exercise. It also prevents the heart muscle from stiffening – which otherwise does happen with age. An increased clotting potential has also been documented after marathons. Untrained individuals indulging in intensive exercise may be prone to greater clotting of blood in the (coronary) arteries, which supply blood to the heart. The actual mechanisms are increased thrombin generation, platelet hyperactivity and increased activity of coagulation factors. In contrast, regular endurance runners are not vulnerable to clotting in their coronary arteries.

Some physical activity of moderate intensity is associated with all causes of cardiac mortality. However, frequent marathon runners (who have run five marathons in three years) have been found to have greater calcium in their coronary arteries when compared to sedentary individuals computerised tomographic (CT) scans. This is because intense and prolonged exercise causes the walls of the coronary arteries to swell up. The calcium gets deposited in such arteries.

A five-fold increase in the prevalence of atrial fibrillation (AF) has been documented in middle-aged endurance athletes. AF – the commonest form of arrhythmia in the world – is the very rapid beating (more than 300 bpm) of the left and right upper-chambers of the heart, called the left and right atria. During episodes of AF, the atria are unable to contract optimally and simply just quiver. The biggest danger of AF is a stroke by an embolus originating from a blood clot in the atrium.

Complex ventricular ectopy, including ventricular tachycardia (VT), is also well-documented among endurance-trained athletes. VT is the rapid beating of the ventricles or lower chambers of the heart (140-280 bpm). Most sudden deaths are due to VT that degenerates to ventricular fibrillation. The ectopy originates from a dilated right ventricle or the interventricular septum. The clinical ramifications of ventricular ectopy are open to debate. Sudden cardiac death fortunately is rare, as has been discussed. It would be prudent to advise the middle-aged long distance runner to restrict herself to half-marathons, rather than attempt a full marathon, to fully enjoy the beauty and thrill of running.

The duration and intensity of exercise are crucial in any discussion on AF or, in fact, total mortality in long-distance runners. The maximum cardiovascular benefits are achieved with moderate doses of exercise – while benefits are lost with high intensity and prolonged routines.

A study based entirely on questionnaires has reported important conclusions while raising questions at the same time. It showed that frequent (>5 hours/week) intensive exercise in young adults (30 years) predicts AF incidence later in life (60+ years) independent of whether exercise was continuous. Animal models have also revealed that intensive exercise promotes AF, which can act as a precursor to AF later on. This can explain the increased prevalence of AF in middle-aged people who have indulged in intensive exercise when they were in their thirties.

High-intensity exercise beginning at middle age does not hike the prevalence of AF. So it is possible that high-intensity exercise by a middle-aged person is substantially less strenuous than when performed by a 30-year-old. ‘Intense exercise’ at 60 years may also produce less haemodynamic disturbance compared with ‘intense exercise’ at 30 years of age. Further studies are needed to explain this phenomenon.

In another study, during a median follow-up of 12 years, 4,568 cases of AF were diagnosed in 44,410 men free from AF at the start. The risk of developing AF was greater in those who exercised 5+ hours/week at age 30 and quit exercising later in life. Walking or bicycling at middle age was inversely associated with a risk of AF.

Yet another study, which followed 1,038 heart patients for a decade found that patients exercising strenuously for two to four days/week were at the lowest risk of cardiovascular events and death. On the other hand, patients who did not exercise at all or who exercised every day were presented with higher event rates. These patients were no different from patients in other studies.

Other small studies have also suggested greater clinical events with more extensive and frequent exercise schedules. One reason for adverse events is the development of a pro-inflammatory state with exercise that in turn sparks atherosclerosis. It is not known as to why frequent exercise triggers heart disease in some and not in others.

An exercise threshold of >5 hours/week and daily intense exercise may trigger AF or cardiovascular events. The researchers concluded that their study confirmed previous data on increased adverse outcomes with physical inactivity – but that daily strenuous physical activity increased cardiovascular mortality.

The heart disease that develops from intense endurance training is also called Phidippides cardiomyopathy after the Greek messenger who died after running 175 miles in two days. The heart forms fibrosis, or scar tissue, that accumulates over time due to excessive and repetitive stretching of the heart ventricles pumping large amounts of blood during prolonged training and competition.

The benefits of exercise are to be repeatedly reinforced with the general public together with the fact that too intense a training regimen may be counterproductive – as with all other things in life. A threshold does exist where risk outweighs benefit.

A death while running a marathon is a rare, albeit a deeply traumatising, event. The RACER study examined 59 deaths among 10.9 million participants of marathons and half-marathons between 2000 and 2010. Men had an increased rate of risk of cardiac events; it averaged five-times that of women. Younger runners (<40 years) experiencing cardiac arrest were almost seven-times less likely to survive than older runners (>40 years). The younger group suffered predominantly hypertrophic cardiomyopathy (a congenital disease in which the heart walls and particularly the septum dividing the left and right ventricles is immensely thickened) – while older runners had ischemic heart disease, a condition more responsive to resuscitation. Research estimates range from 0.5 to 2 deaths per 100,000 marathon runners in a given race.

It is important to appreciate the rarity of a death while participating in a marathon – so please do not stop participating in one. But it would be advisable not to train for and participate in too many marathons because the heart may be damaged in a few. Currently scientific knowledge and technology are unable to accurately predict or identify the vulnerable. The mortality is heightened with prolonged daily endurance exercise – but, then again, also in those who do not exercise at all. Intensive exercise for years in the young may lead to development of atrial fibrillation later.

A middle-aged runner must have an annual ECG and 2D echocardiogram to pick up alterations in the heart. In fact, these tests should be mandatory for a middle-aged person beginning an exercise program or preparing for a long-distance race. Crucially, either ten to fifteen minutes of brisk walking or jogging five days a week provides considerable cardiovascular benefits. Moderate exercise two to four times a week substantially cuts down the risk of a heart attack.

Deepak Natarajan is a cardiologist based in New Delhi. The contents of this article are not to be treated as medical advice of any kind.