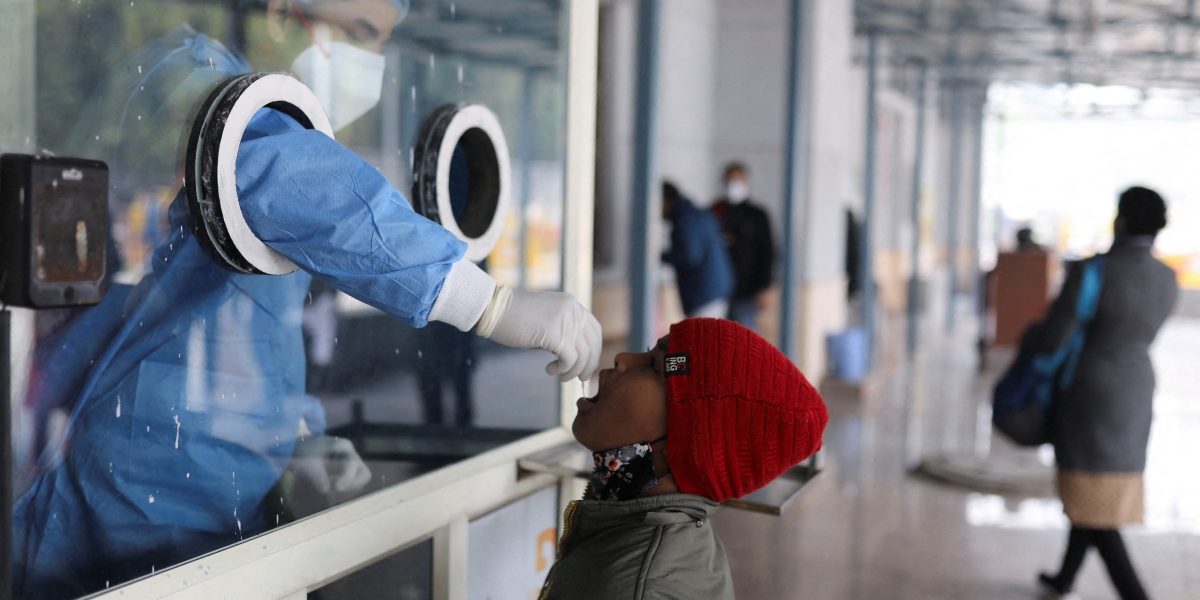 A healthcare worker collects a test swab sample from a child amidst the spread of COVID-19 in New Delhi, January 14, 2022. Photo: Reuters/Anushree Fadnavis

New Delhi: If stakeholders in the health sector were looking for any key announcement in the Union Budget 2022-23, they were in for a big disappointment as both health infrastructure and research were snubbed.

Union finance minister Nirmala Sitharaman’s budget speech mentioned the health component at the very beginning, saying that the strengthening of India’s health infrastructure and the speedy implementation of the COVID-19 vaccination programme was there for all to see. The rest of the speech, however, was lacklustre, as far as the health sector was concerned.

Only one new scheme was announced. “The pandemic has accentuated mental health problems in people of all ages,” the finance minister said. Keeping this in view, Sitharaman said a ‘National Tele Mental Health Programme’ would be launched. The programme would include a network of 23 tele-mental health centres of excellence with Bengaluru-based National Institute of Mental Health and Neurosciences (NIMHANS) anchoring it. The International Institute of Information Technology, Bangalore (IIIT-B) will provide tech support.

She did not provide any more details about the programme, even the scheme’s budgetary outlay.

Overall, the health ministry has been allocated Rs 86,200 crore – an increase of over Rs 12,000 crore from last year’s budgeted estimate but just Rs 200 crore more than the revised estimate.

In last year’s budget, the finance minister had announced the PM Atma Nirbhar Swasth Bharat Yojana with an outlay of Rs 64,180 crore to be spent over six years. The aim was to improve primary, secondary and tertiary health centres and create an ecosystem to detect and cure new and emerging diseases.

The ‘Implementation of Budget’ document that gives an assessment of work done on schemes announced last year indicates that operational guidelines for the Yojana were released only in October 2021. The proposals under this scheme have been received from 10 states and union territories – Andhra Pradesh, Gujarat, Telangana, Jammu and Kashmir, Uttar Pradesh, Madhya Pradesh, Himachal Pradesh, Meghalaya, Tamil Nadu and Uttarakhand. The proposals are under process for approval.

Land for the establishment of the ‘Centre for One Health’, as per the Yojana, has been identified in Nagpur. According to a Press Information Bureau release, this Centre will carry out surveillance of important bacterial, viral and parasitic infections in the country. This was conceptualised in the backdrop of the COVID-19 outbreak.

In last year’s budget, the finance minister had also said that five more National Institutes of Virology (NIVs) would be opened. Currently, there is only one, in Pune. This year’s Budget implementation document says that the NIVs would be opened in Dibrugarh, New Delhi, Chandigarh, Bengaluru and Jabalpur. The construction work is to begin soon.

The PM Atma Nirbhar Swasth Bharat Yojana had many other components, like support for health and wellness centres, public health labs at block levels in 11 states, the establishment of critical care blocks in 602 districts, strengthening of the National Centre for Disease Control (NCDC), setting up 15 health emergency operation centres and two mobile hospitals. The implementation document did not provide any update on these components.