"I feel content when the patients and their family members thank us and pray for our welfare. That is more rewarding than any award for our work.” 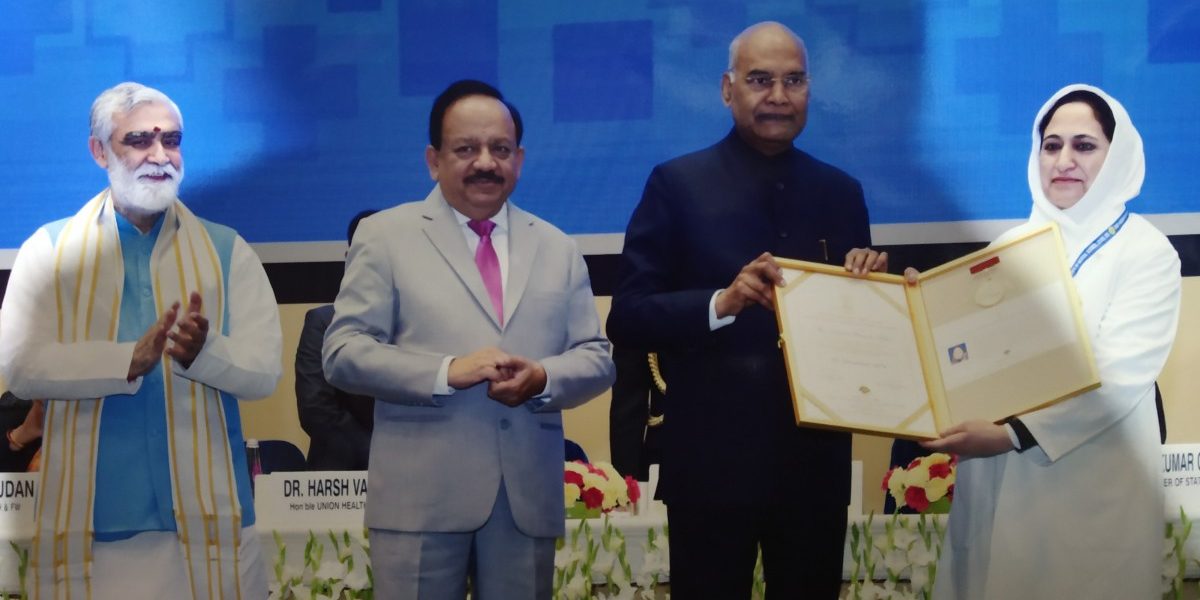 Parveen currently works as an assistant nursing superintendent at the hospital.

The award was presented to her by President Ram Nath Kovind at a function held in New Delhi on December 5 last year. “She is a dedicated nurse and has rendered remarkable services towards the development of nursing care and academics in nursing sciences. She is thorough in her job responsibilities and has inspired her colleagues to stay positive,” reads the award citation. The citation also notes that Parveen worked with “utmost dedication” during the 2014 flood in the Kashmir Valley and “offered her services beyond duty hours”.

Parveen joined SKIMS in 1984 as a young nurse. Back then, the recently established medical institute had only a few wards. She had returned to the Valley after completing a four-year nursing course in a hospital in Punjab. She had enrolled for the training course soon after finishing Class 12, when she was just 18.

She was among the first batch of 20 young nurses employed by the institute in 1984. The hospital was in its infancy, with only three wards and one operation theatre. Over more than three decades of service at the hospital, she worked in various administrative capacities, contributing to patient care at the hospital. At present, as an in-charge nursing superintendent, she oversees the work of about 60 nurses at the hospital. She is also a warden at the Haba Khatoon Nurses Hostel where the nurses live during their training at the medical institute.

“For all these years I’ve sacrificed my family time to look after the patients and take care of their needs. I feel content when the patients and their family members thank us and pray for our welfare,” she said. “That is more rewarding than any award for our work.”

Post August 5 last year, after all the communications lines were snapped and phones stopped working following the revocation of Article 370 and bifurcation of the state into two union territories, Parveen said they faced many difficulties while reaching out to hospital staff and remaining in touch, which also affected patient care. But she is quick to add that the unprecedented communication shutdown did not stop them from performing their duties and attending to the patients.

“We think of patients as our own people and all nurses would somehow reach the hospital in time despite the restrictions. We did our duties in spite of all odds, as we have attended to our duties in the past every time the situation would worsen,” she said, adding that all the nursing staff of the institute took care of patients in difficult times despite the communication shutdown imposed from August.

Parveen said hundreds of nurses at SKIMS have worked in tough conditions from the turbulent 1990s onwards, when many serious casualties including bullet and blast injured people would be rushed to the hospital for emergency treatment. Many of them breathed their last at the institute.

“We’ve have spent several sleepless nights at the institute looking after and nursing such patients at the surgical wards,” she said. “We would heave a sigh of relief when the seriously injured people would survive in the end and feel sad when many couldn’t survive their injuries despite best efforts of doctors.”

During the 2014 floods, she said, she looked after hundreds of patients at the hospital for seven consecutive days and nights, along with 200 other nurses who she’d accommodated at the nursing hostel. Parveen has also helped created a bank account, along with 10 other hospital staff, in which the donated money is saved for poor and needy patients who need financial assistance for their treatment.

“The account has grown over the years as many other people, including hospital staff and doctors, contribute. The money is saved in the account for the poor patients. We have been able to save a good amount which is then given to the poor and deserving patients on a need basis,” she said.

She said over the years, she’s given maximum time to patients admitted at the institute, often cancelling her off days, and also worked beyond duty hours. Whenever required, she returns to the institute in the evening to check on patients.

“There were times when nurses including me had to donate our blood when it was required for critical patients,” she said. “There’s no greater joy than saving a life. Words of thanks and prayers by the patients who recover at the institute is a big reward.”

Parveen believes there’s a need for more young girls to train and work as nurses in the public hospitals of Kashmir. She believes if nurses work sincerely and do justice to their profession, they can achieve a lot.

“Nursing is a noble profession. It is the nurse who is taking care of the needs of the patients most of the time, when even their family members are not around,” she said.

Despite serving in different administrative roles with decades of experience as a senior nurse, Parveen leads by example, and still prefers to do bedside nursing so that the younger nurses take a cue and prioritise patient care over everything else.

“We have to think of patients like our own family members,” she said. “Tomorrow it could be one of us on that hospital bed in need of a nurse.”