The UP chief minister has said he will prevent the recurrence of such events, but that will mean focusing efforts on locating and solving systemic problems rather than suspending individuals. 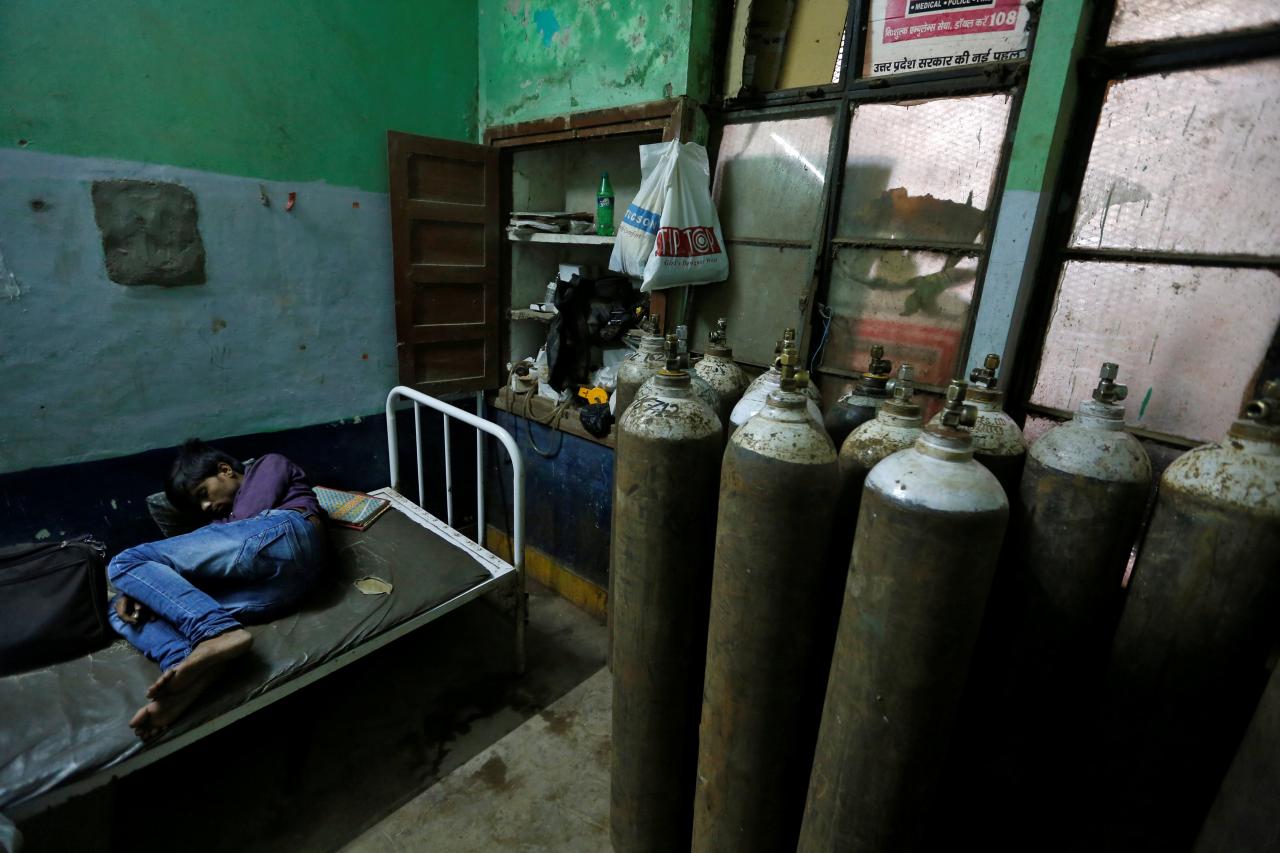 A man sleeps in a room containing oxygen tanks in the Baba Raghav Das hospital in Gorakhpur. Credit: Reuters/Cathal McNaughton

Of the unsettling accounts to emerge from the still-unfolding Gorakhpur incident, perhaps the scariest has been the disruption in oxygen supply. Regardless of whether the disruption directly contributed to any of the deaths, and whether the supplier stopped deliveries or the supplies were thieved, the precarious position of such a vital medical commodity in a referral healthcare facility should disturb healthcare providers and the public alike.

“We as doctors across India want to know…why was the oxygen supply allowed to cease[?],” president of the Indian Medical Association Dr K.K. Aggarwal is quoted as asking about Gorakhpur. It is time for caregivers, taxpayers and the public to ask the same question.

Oxygen can save lives in certain health conditions. No matter the other differences in the lives of a child from an Uttar Pradesh village and one from a wealthy London suburb, when they are sick and in hospital, the need for oxygen is unfortunate common ground. Gorakhpur has now joined a wider, ongoing, global conversation about the role of oxygen in healthcare, particularly how to ensure uninterrupted supply in low-income settings.

A health care facility can spend money on a variety of options for oxygen:

The first two must travel from commercial manufacturers to the health facility and accordingly depend on good road connections and the administrative and financial capacity to maintain regular refilling.

Liquid oxygen means larger usable volumes are stored using relatively less space compared to cylinders. Liquid oxygen is also more difficult to steal than cylinders – although even the lightest cylinder weighs a rather bulky four kg. However, there are other cost outlays: liquid oxygen needs a special storage container (a tank that essentially acts as a massive vacuum flask); a vaporiser (to change it to gas before use); and a pipeline network (to bring it directly to the bedside).

Oxygen concentrators extract oxygen from atmospheric air at the point of use, requiring no road transport and no administrative burden for regular refilling. Most are designed for a maximum of four patients, but larger concentrator systems supplying entire hospitals have also been developed. Concentrators depend on a reliable, uninterrupted power source and are subject to additional maintenance and repair costs.

The importance of back up

Hospitals in high-income countries use a combination of the above options. Oxygen stock for hospitals in the UK typically consists of a pipeline system connected to a main liquid tank, reserve liquid tank and reserve “manifold” (the collective noun for a group of gas cylinders within the same pipeline). Individual, non-pipeline cylinders are used as further back up and also for transporting patients within the facility and between facilities. The reserve and back up systems provide a large margin for error in case of pipeline breakdown or increased demand.

Oxygen concentrators for health facilities are in much higher use in Canada, where many health facilities are remote and inaccessible from good roads, and in military field hospitals. Cylinders are still used as back up in case of power outages. The WHO recommends a selection of oxygen concentrators for small hospitals in low-income countries after reviewing initial results of initiatives from Malawi, Mongolia, Egypt and Papua New Guinea, where this technology has been widely adopted, in some cases using solar-powered concentrators.

Although a universal procurement standard is difficult to set given regional and even seasonal variation in the types of conditions likely to need oxygen, the WHO’s suggestion to children’s facilities is to invest in one concentrator capable of continuous supply for four patients per 10-15 admissions. Even this recommendation depends on reliable data collection on when, why and how many patients seek help, often missing in many facilities. 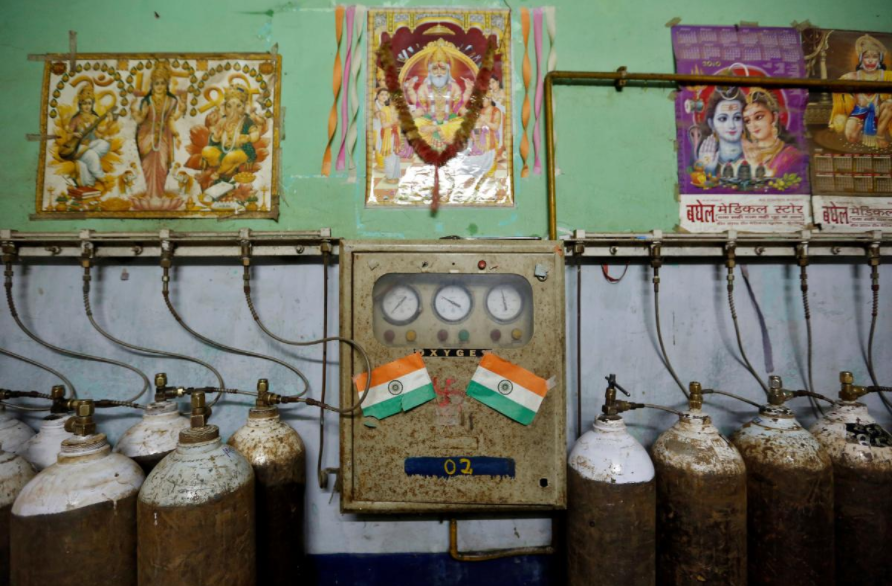 Next steps for oxygen in India

Although Gorakhpur’s oxygen emergency is in the spotlight at the moment, it is not the first time Indian health providers have faced challenges involving oxygen. “Almost the entire hospital network in the state has been affected because, apparently, there is not a single liquid oxygen manufacturing plant in Kerala,” a hospital administrator in that state was quoted saying in May this year, after a power and water shortage in neighbouring Tamil Nadu affected hospital oxygen stock in Kerala.

A candid 2016 gap analysis of gas use in the Armed Forces Medical College Hospital in Pune found limited documentation from the oxygen supplier and major gaps in pipeline maintenance, particularly in the lack of alarm mechanisms to alert staff to shortages.

Also read: What the Gorakhpur Tragedy Tells Us About India’s Public Healthcare System

Returning to Gorakhpur, reports indicated that both the liquid tank and cylinder stocks fell short. It is currently unclear whether a reserve tank was present. Documentation will once again be an important component of the many planned reviews: of deliveries received, gauge levels in the tank, serial numbers on oxygen cylinders and testing of the pipeline. Each factor plays an equal role in the overall functioning of the oxygen delivery system. Unfortunately, the likelihood for never finding out what went wrong is high, as fears of individual liability can lead to cover-ups of systemic gaps.

Humans vs the system

In 2012, the Union Ministry of Health and Family Welfare quietly published the revised version of a set of potentially groundbreaking documents. ‘The Public Health Standards of India’ detailed the minimum expected infrastructure and human resources needed to run the country’s healthcare services, from sub-centres to district hospitals. Regulatory mechanisms for the standards are not as easily accessible to the public, and in any case the standards apply to only government-run rather than all facilities. Nevertheless the standards are high.

They state that oxygen is an essential commodity for any maternal birthing unit, including sub-centres, the most ‘peripheral’ of India’s rural health facilities, and that all district hospitals should have piped oxygen to their sickest patients (so in intensive care areas).

If this high bar is to be met, the variety of geographies and transport connections in India means that a combination of oxygen procurement approaches must be used. Equally important to procurement is ensuring that contracts are awarded fairly, payments are timely and stocks are not stolen. The challenge is to create a system which makes these outcomes more likely and limits harm to patients from almost inevitable human and other error.

“We must take lessons from every incident and accident, and prevent their recurrence with firmness,” vowed Uttar Pradesh’s chief minister this Independence Day. Preventing recurrence is a worthy goal, but meaningfully achieving it will mean focusing efforts to locating and solving systemic problems rather than suspending individuals, firmly or not.

Deya Dasgupta is a paediatric doctor in the UK’s National Health Service with an interest in international health. She just finished a sabbatical with Doctors Without Borders in India.