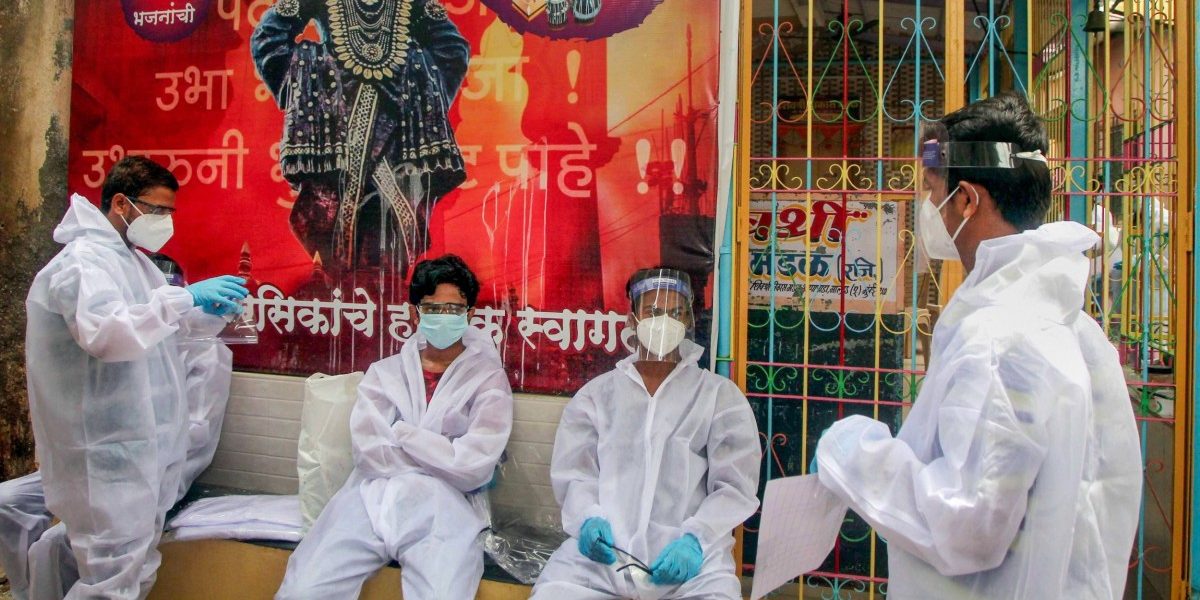 Health workers checking for COVID-19 at a free camp in Mumbai. Photo: PTI

This is the sixth consecutive day that coronavirus infections have increased by more than 15,000. The country has seen a surge of 3,57,783 infections from June 1 till date.

The number of active cases stands at 2,10,120, while 3,21,722 people have recovered, and one patient has migrated, according to the updated data.

“Thus, around 58.67% of patients have recovered so far,” an official said.

According to the Indian Council of Medical Research (ICMR), a cumulative total of 83,98,362 samples have been tested up to June 28, with 1,70,560 samples tested on Sunday.

Of the 380 new deaths reported, 156 are from Maharashtra, 65 from Delhi, 54 from Tamil Nadu, 19 from Gujarat, 16 from Karnataka, 12 from Andhra Pradesh, 11 from Uttar Pradesh, 10 from West Bengal, eight from Rajasthan, seven from Madhya Pradesh, five each from Haryana and Punjab, four from Telangana, three from Odisha and one fatality each was reported from Jammu and Kashmir, Assam, Goa, Uttarakhand and Bihar.

Chhattisgarh has registered 13 deaths, Jharkhand 12, Puducherry and Assam 10 each, Himachal Pradesh nine, Chandigarh six, Goa three and Meghalaya, Tripura, Ladakh and Arunachal Pradesh have reported one fatality each, according to the Health Ministry.

More than 70% deaths took place due to co-morbidities, it said.

Puducherry has recorded 619 COVID-19 cases, Chandigarh 429, Nagaland 415, Arunachal Pradesh 182 and Dadra and Nagar Haveli and Daman and Diu together have reported 178 COVID-19 cases.

Mizoram has 148 cases, Sikkim has 88 and Andaman and Nicobar Islands has registered 76 infections so far, while Meghalaya has recorded 47 cases.

Across the world, there have now been more than 10 million confirmed cases of the coronavirus disease. In total, 10,145,947 confirmed cases have been reported as of Monday morning.

According to Johns Hopkins University, the global death toll due to COVID-19 stands at 501,893. Another 5,140,987 people have recovered from the disease.

Also read: Will the Number of COVID-19 Cases in Delhi Be Less Than Earlier Projected?

Delhi chief minister Arvind Kejriwal on Monday announced setting up of a ‘plasma bank’ to save lives of serious COVID-19 patients in the national capital.

Addressing an online media briefing, the chief minister said the bank will start working in the next two days, adding that the AAP government will encourage those who have recovered from COVID-19 to donate their plasma.

The chief minister said that a helpline will be set up by the government for queries related to donation of plasma.

Kejriwal said that his government has so far conducted clinical trial of plasma therapy on 29 COVID-19 patients and the result was “encouraging”.