India's Health Story Is One of 'Nations Within a Nation,' Says New Study

Report looks at 26 years of health data in India to see trends in diseases and risks in every state. The conclusion is that large health inequalities exist among states. “We’ve brought down the total fertility rate to 2.2. Of course there’s still a few states which need to come to that.” Credit: Reuters

New Delhi: The thought has crossed the mind of health administrators in India over the years –  Should health remain a ‘state subject’ in India? And who then is really accountable?

A new report released by the government today drives home the point that India does not have one single health story. In fact, every individual state, some of which are larger than entire countries, has its own health stories to deal with and to make.

The report was accompanied by a paper in The Lancet titled ‘Nations within a Nation.’ The political angle taken by this paper with 166 contributors is explained in the journal’s editorial that references parliamentarian Shashi Tharoor’s recent book on British colonial plunder of India. The editorial says that India’s health needs to be examined in a post-colonial framework.

The massive report titled India: Health of the Nation’s States has studied 333 disease conditions and injuries and 84 risk factors across 30 states over 26 years. It also has specific chapters on every state, and policy suggestions. The report is the first time that disease and risk have been analysed at this level of granularity, and then composed into a single comprehensive document.

Health is a state subject in India, which means that although some fund allocation, policy and legislation is done at the central level, states have a wide scope for implementing all of this and for doing more than what the Centre prescribes. This shared responsibility explains the massive health inequality among states.

The comprehensive new report points to just that – health in India works at deeply unique sub-national levels. Every state has a distinct health story. Data and evidence need to be more individualised, and policy interventions need to be bespoke.

“India’s states will require very different policy approaches according to the nature of the disease burden they are facing,” the report states.

The report echoes the NITI Aayog Action Agenda 2017-2020 and the National Health Policy 2017 and calls for more decentralised health planning, which has been recommended recently by both.

But the Centre handles a large number of things as well, including financing states through the National Health Mission, key legislations and medical education.

So while decentralisation is a policy direction the government has already embarked on, it also sometimes gives a free pass to the Centre.

“Just because health is a state subject doesn’t mean the Centre can wash its hands off. We have seen that state governments are happy to get central government funding. When you give states money and with conditions, they do spend it and come back with results. Calling it a state subject also creates an artificial distinction,” said former health secretary Keshav Desiraju.

Non-communicable diseases as a case of sub-national inequality

This report shows that every state in India now has a higher burden due to non-communicable diseases and injuries than to infectious and maternal-child diseases. In some states, this transition began as early as 1986.

Speaking at the launch about the disease transition, Union health minister J.P. Nadda said, “This happened in some states about three decades ago and in other states more recently. This means that the more developed states that had this transition a long time ago need to go on a war footing to control the rapidly rising burden of major non-communicable diseases and injuries. On the other hand, the states that have had this transition more recently now have rising risk for non-communicable diseases and also continue to have a high burden of infectious and maternal-child diseases.”

For example, Kerala is far ahead in this epidemiological transition. Bihar is on the other end and is struggling with the challenge of the “double burden” of disease. Kerala, Goa and Tamil Nadu are the top three states where non-communicable diseases dominate, whereas the dominance is lowest in Bihar, Jharkhand, Uttar Pradesh and Rajasthan.

The report calls this India’s dual challenge: “Although the absolute burden of diseases such as diarrhoea, lower respiratory infections, tuberculosis and neonatal disorders is being reduced, it remains high. At the same time, the contribution to health loss of non-communicable conditions such as heart disease, stroke and diabetes is rising.” 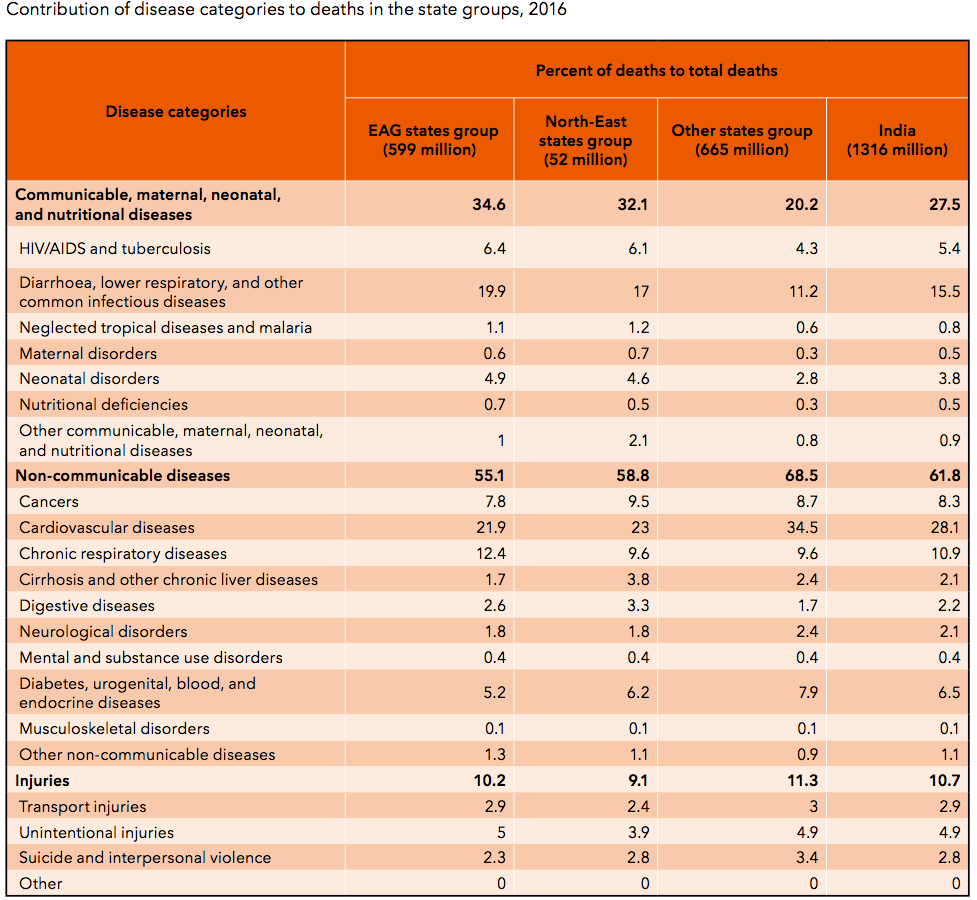 Credit: India—Health of the Nation’s States

All this being said, five of the ten leading individual causes of disease burden in India in 2016 still belong to diarrhoeal diseases, lower respiratory infections, iron-deficiency anaemia, neonatal preterm birth and tuberculosis. Not to be forgotten: Child and maternal malnutrition was still the single-largest risk factor, responsible for 15% of India’s disease burden in 2016.

The challenge of variation

Given such sub-national variations, how can policymakers bring health equality? On this, the report says that the key is to “successfully address these risks and determinants in each state.”

Where would accountability lie in this dynamic between Centre and state?

“There is wisdom in shifting health to the concurrent list so that both Centre and state can manage it,” says Oommen C. Kurian, public health fellow at the Observer Research Foundation. “Almost all major health initiatives in India over the last two decades have been driven by the Centre. Any serious initiative towards the right to healthcare will be immensely helped if health is shifted to the concurrent list,” he says.

Keeping the focus on states, Lalit Dandona, one of the authors of the Lancet study, says, “Many Indian states are bigger than most countries in the world. It is necessary to plan health interventions based on the specific disease burden situation of each state, many of which are no less than nations within a nation if the existing major health inequalities between the states have to be reduced.”

“Every government only wants to give ten thousand crores to build an AIIMS. No one wants to invest in something that gives results in 10 years. Everyone is looking at the next election cycle and where to lay a foundation stone,” says Desiraju.

Decentralisation can likely happen when “planning for health would be done at the most local possible level,” says Amit Sengupta of the People’s Health Movement. “Decentralisation does not mean a withdrawal of the Centre. It means all levels of government have a role with the locus of decision making shifting to the lowest possible level. But we see that finances and policies are in fact consolidated at the Centre – the NITI Aayog’s new proposal to privatise district hospitals is one example.”