‘End of the Debate’: Trial Finds Masks Do Prevent Spread of COVID-19

The researchers found that while surgical masks are highly protective, cloth masks are not. 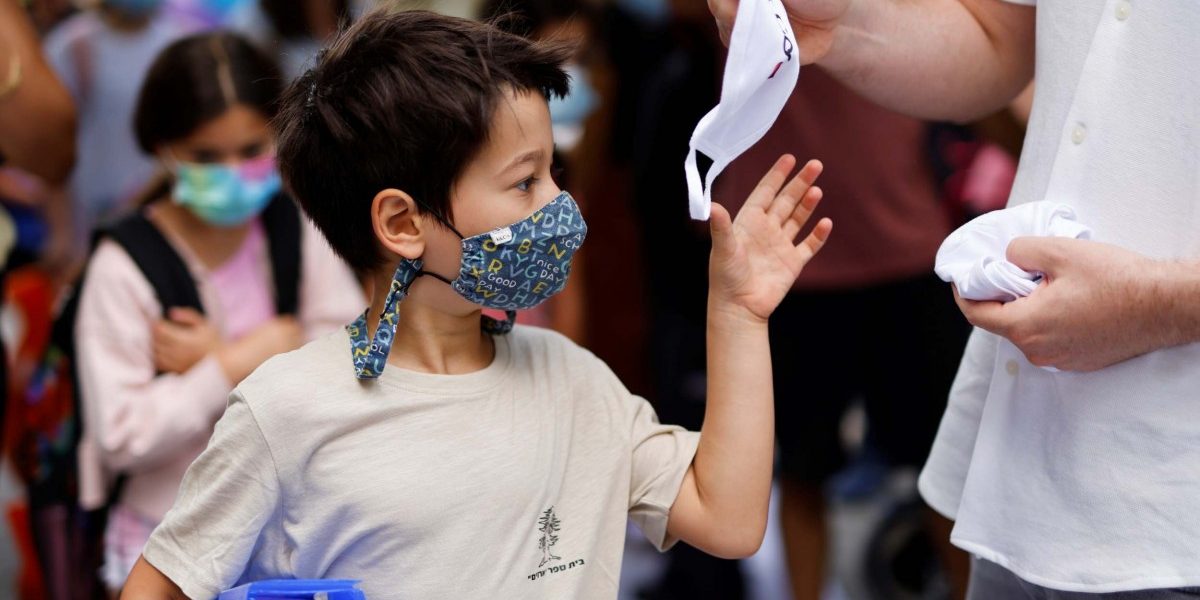 A staff member hands a face mask to a boy as students return to school after the summer break, less than a month into a coronavirus disease (COVID-19) vaccine booster drive, at Arazim Elementary School in Tel Aviv, Israel September 1, 2021. Photo: Reuters/Amir Cohen

New Delhi: A large clinical trial conducted in Bangladesh’s villages has claimed conclusive evidence that surgical face masks protect against COVID-19. The study also suggests that in countries where access to vaccines is poor, mask-wearing could help keep the number of cases in check.

Though scientists have argued since the start of the COVID-19 pandemic that mask-wearing and physical distancing will cut the transmission of the novel coronavirus – based on observational studies – people around the world haven’t adopted these behaviours in a consistent way. Mask-wearing has also been politicised, especially in the US but also in India. Critics of mask mandates have cited, among other things, the absence of clinical trials to support claims that face masks reduce transmission of the virus.

The trial in Bangladesh, which tracked nearly 350,000 people in 600 villages between November 2020 and April 2021, found exactly that. The study had two goals: to identify strategies to encourage community-wide mask-wearing, and tracking changes in symptomatic SARS-CoV-2 infections as a result of this intervention.

The researchers have described their trial’s results in a preprint paper.

In villages where the researchers distributed face masks and encouraged their use through awareness campaigns, they found that there was a significant drop in COVID-19 cases. The transmission was lower when people wore surgical masks, but not when they wore cloth masks, the researchers said.

In control villages, the researchers didn’t provide any intervention.

The researchers also reported that in treatment villages (i.e. villages that received masks and were ‘exposed’ to the awareness campaigns), thrice as many people wore masks regularly as those in the control villages.

“This tripling of mask usage was sustained during the intervention period and two weeks after. Physical distancing increased from 24.1% in control villages to 29.2% in treatment villages,” the researchers wrote in their paper. “After five months, the impact of the intervention faded, but mask-wearing remained 10 percentage points higher in the intervention group.”

According to Nature News, the study also found that the number of symptomatic cases was lower in treatment villages than in control villages.

“The decrease was a modest 9%, but the researchers suggest that the true risk reduction is probably much greater, in part because they did no SARS-CoV-2 testing of people without symptoms or whose symptoms did not meet the WHO’s definition of the disease,” the news website said.

But as the researchers pointed out, “Our results should not be taken to imply that masks can prevent only 10% of COVID-19 cases, let alone 10% of COVID-19 mortality.” They said that the intervention induced only 29 more people out of every 100 to wear masks. “The total impact with near-universal masking – perhaps achievable with alternative strategies or stricter enforcement – may be several times larger than our 10% estimate,” the wrote.

The researchers also found “clear evidence” that surgical masks were effective in reducing the number of symptomatic cases of COVID-19, and added that while cloth masks “clearly reduce symptoms, we cannot reject that they have zero or only a small impact on symptomatic SARS-CoV-2 infections”.

Also according to Nature News, the study found that surgical masks reduced risk by 11% while cloth masks did so by 5%.

“The data show that even after 10 washes, surgical masks filter out 76% of small particles capable of airborne transmission of SARS-CoV-2,” Mushfiq Mobarak, an economist at Yale University and a coauthor of the study, told the site.

However, three-layered cloth masks only had a filtration efficiency of 37% before washing or use.

“This really should be the end of the debate,” Ashley Styczynski, an infectious disease researcher at Stanford University and another author of the paper, told Nature News.

Many middle and low-income countries are facing a long wait to get vaccinated against COVID-19, even as some nations have rolled out a third booster dose. With this scenario unlikely to change before the end of 2021, the researchers suggest that since masks reduce infections, policymakers should develop long-term awareness programmes to encourage their use and reduce cases.

Doing so could buy us more time to increase the fraction of the population that is vaccinated.