On Elephanta Island, Development Is a Distant Dream

Basic necessities such as clean drinking water or a health facility remain illusive at the three villages on Elephanta Island. 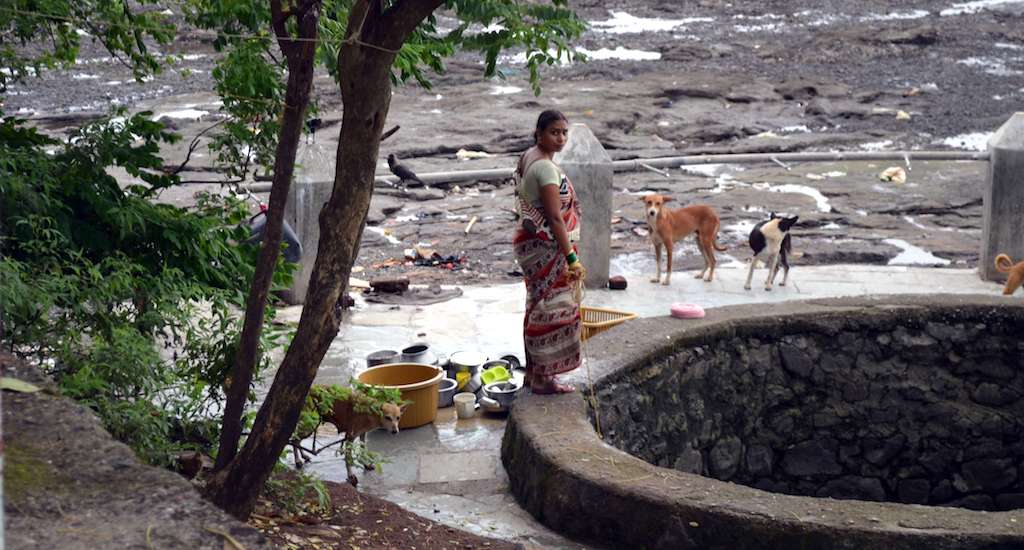 A village woman in Elephanta cleans household utensils at a well that barely contains any water. Credit: Gajanan Khergamker

Elephanta Island, Maharashtra: At 12 years of age, she looked like any other girl. When not attending school, Sarika Bhagat would help her father load empty cold drink crates at a nearby jetty at Elephanta island. She’d pitch in by picking that odd empty crate herself.

One evening, while her father Namdeo Bhagat was at the jetty loading the crates, Sarika tried to help, as usual. But, just when she went to pick up an empty crate, a snake that lay coiled beneath sprang up and bit her. Sarika’s father rushed her for treatment to the village headman, the only quack available on the island.

In a ritual performed on snake-bite victims, a small cut was made at the site of the bite and the part inserted forcibly into a young fowl’s rectum. The fowl yelped in agony and finally died as if to symbolise that the venom had been sucked out of the victim and had killed the fowl. However, even as everyone rejoiced, Sarika’s health worsened.

The islanders were left with no option but to rush her to a hospital. But there was one hitch. There was no medical facility on the island. Elephanta, also known as Gharapuri, which is barely 10 km and a 40-minute boat ride from Mumbai’s Colaba – known as the world’s costliest realty zone – doesn’t house a single doctor.

Worse still, after 6 p.m., all ferries that ply to mainland shut shop. So, Sarika had to be rushed across the sea in a private fishing boat to Uran. Despite an exhausting hour’s journey after which she was given preliminary treatment, her condition worsened still.

The next morning, she was moved to Mumbai’s King Edward Memorial hospital, where the 12-year-old breathed her last. Islanders yet shudder as they recall how cherubic Sarika’s torso had bloated beyond recognition at the time of her death. 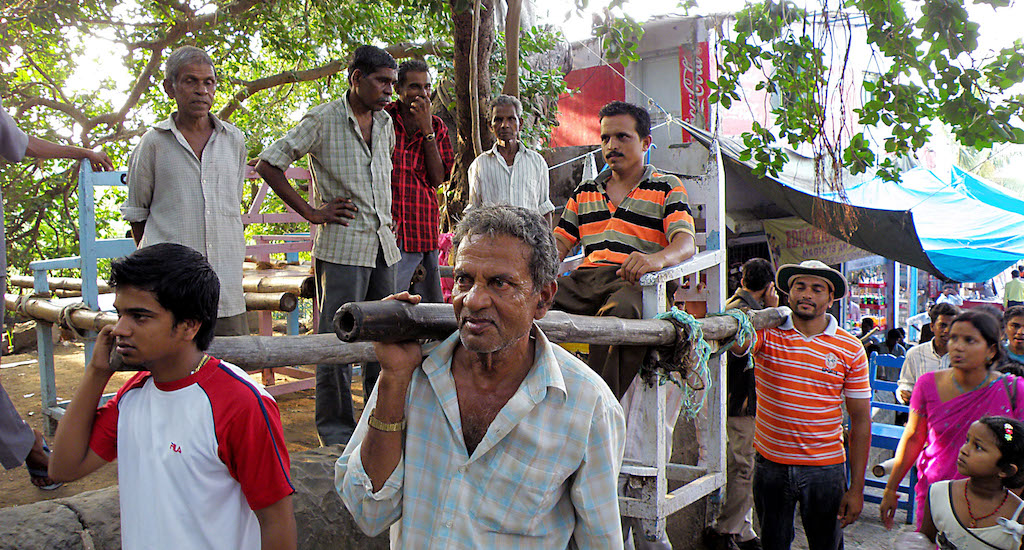 Carrying tourists in palanquins up the hill to the famous caves is a means of earning a pittance for islanders, young and old. Credit: Gajanan Khergamker

Designated as a UNESCO World Heritage Site in 1987, Elephanta Island is visited by more than one million tourists every year but has a deplorable developmental record. The tourists who are awestruck by the sculptures of the Elephanta caves have no idea of the dismal lives of the island’s inhabitants. The 1,200-odd islanders, who live in three villages on the island – Shetbunder, Morabunder and Rajbunder – live beyond the pale of any development. They have no basic medical facilities, no clean drinking water, erratic communication and no power supply. Authorities remain apathetic to their plight.

When thousands of tourists walk their way up to the caves, some transported in palanquins by elderly locals, up the 120-odd steps from the base of the island to the top of a hill, with them trudge local women with colorful pots tied to ropes. They make their trips to the top a few times every day to fill clean water from a pond located in a cave and walk back all the way to their villages.

Over the years, there have been spurts of some progress and the announcement of plans but nothing has moved on the ground. A water reservoir built on the island to collect rainwater remains underutilised as a pipe to transport the water lie rusted.

For over 25 years, Kamlakar Bhoir would travel from the island to a hospital on the mainland for treatment of alcohol-linked ailments. A few years ago, his vital functions began to fail and his sons had to rush him in a private fishing vessel to a nursing home on the mainland. A feeble Bhoir couldn’t take the travails of the transit. “If only we had some kind of medical facilities on the island, we wouldn’t have wasted so much time travelling. Our father would have been alive today,” his son Mithun Bhoir told VillageSquare, as he struggles to earn his keep at his father’s stall that lies at the base of the hill.

Cut off from civilisation

And now, in a couple of months, Elephanta Island will be, once again, out of bounds for human interaction. From June until August every year, the erratic monsoons and the accompanying state government limitations on all marine activities put the brakes on ferries plying to and from Mumbai. Business dips to zero for Elephanta’s islanders who subsist almost entirely on tourism. 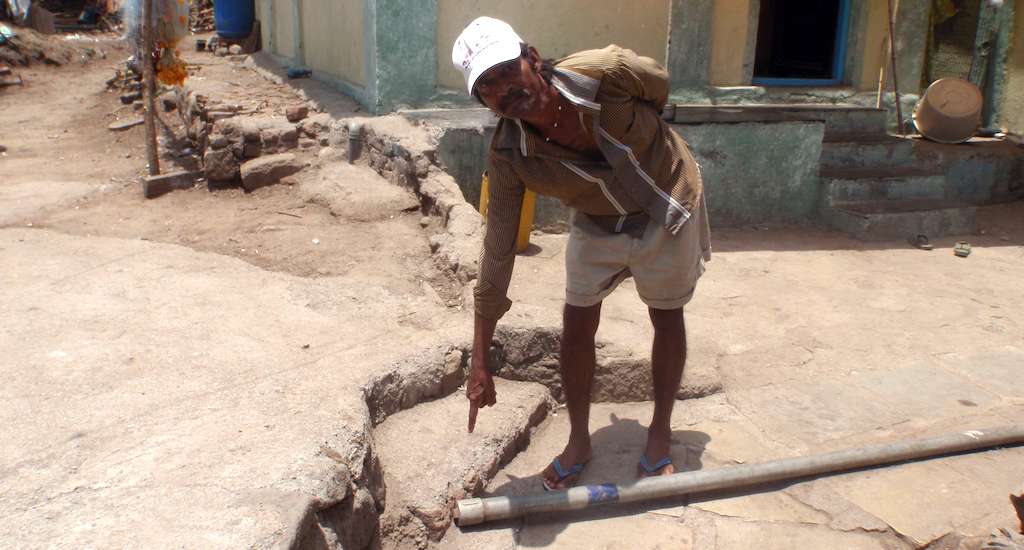 A pipeline to carry water lies unused in a village on Elephanta island. Credit: Gajanan Khergamker

That’s not all. As the monsoons near, there’s the alarming risk of snakebites and health hazards owing to lack of a medical facility. Without the regular ferry service, most islanders have little means to reach mainland swiftly in case of an emergency.

The residents of the three villages on Elephanta have little by way of vocation except for cultivation of rice, fishing for personal consumption and repairing boats, mostly for personal use. The topography of the island prevents them from growing anything of value. The island comprises two hills separated by a valley.

Despite its proximity to Mumbai and Raigad, health remains a critical casualty for the islanders. Heart attacks, strokes and snakebites are the regular causes of death. When Khushboo, the island’s only qualified nurse, who would, for years together, tend to health needs of residents, got married to an islander, they were relieved thinking that their only source of medical aid would remain on the island. In an ironic turn of fate, Khushboo was transferred out of the island and she had to leave to work on the mainland. The islanders were back to square one.

During the Elephanta festival that has the Maharashtra Travel Development Corporation hosting a festival on the island for two days every year, the stretch from the jetty to the caves is lit up brightly with power from a generator. The venue for dance and music is lit up for foreign and domestic tourists during the festival. Once the festival ends and the last of tourists leave, the entire island once again plunges into darkness. Most of the official media coverage provides a lot of information on the annual festival while completely ignoring the needs of the local residents, who are left to grapple, in the dark of the night, with the impeding risk of natural calamity, injury and even death.

To eke out a living, the villagers cart Chinese wares, packaged foods and drinks every day from Mumbai to Elephanta. In just eight months of tourism activity, they need to earn enough to last for a full year. The four months when ferries are stopped from plying, the villagers have no source of livelihood. “Selling a cold drink at MRP (maximum retail price) is simply impossible for us on the island as the regular cooling and transportation costs are high,” resident Sameer Bhoir told VillageSquare.

Gajanan Khergamker is a Mumbai-based writer, solicitor and filmmaker.

The article was originally published on Village Square.