Doctors across Maharashtra and in other places have been on strike, protesting against the lack of security in hospitals and attacks on medical professionals. 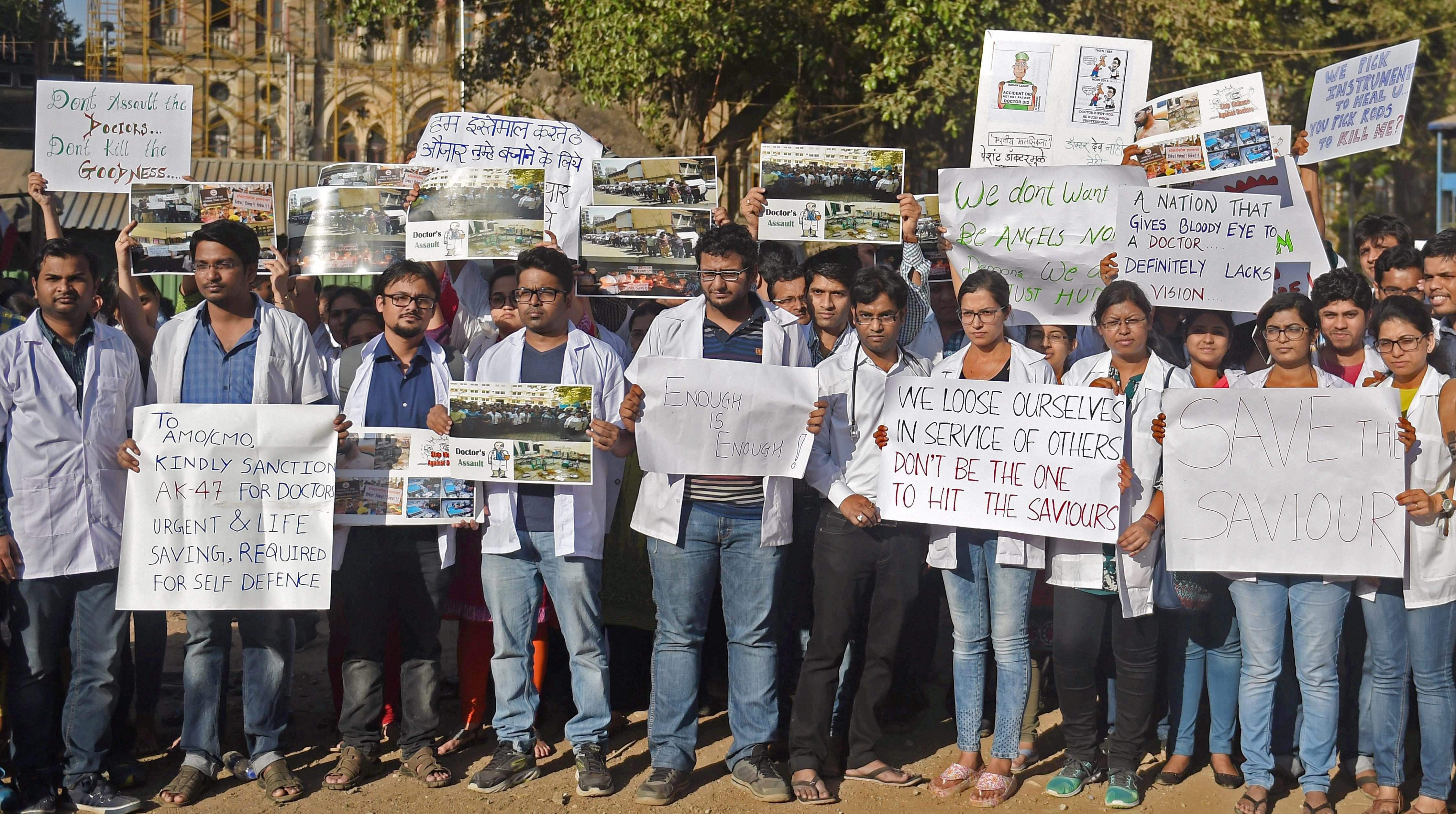 Resident doctors protest at the Azad Maidan demanding security after a intern was assaulted by patient's relatives in Mumbai. Credit: PTI/Files

New Delhi: “Yesterday when the chief minister’s office had suggested a meeting with the protesting doctors in Mumbai, my colleagues there said that they needed to wait until doctors like me were able to arrive in Mumbai. I am glad that there is this unity between peripheral colleges like mine and Mumbai colleges,” says Dr Pillai, in a taxi from Mumbai airport, while on his way to meet his counterparts. He travelled 150 kms from his college in Yavatmal to take a flight from Nagpur this morning and reach Mumbai in order to attend a meeting with Maharashtra chief minister Devendra Fadnavis on safe working conditions for doctors.

Hundreds of doctors from around Maharashtra have congregated in Mumbai today, to meet the chief minister. They have been protesting this week, following incidents where angry patients assaulted doctors within hospital campuses. Nearly 4,000 resident doctors have taken mass casual leave in an act of protest. They clarify repeatedly that they do not call this a strike and it is not organised by any association. They call this a collective agitation by individual doctors.

The issue of peripheral colleges has become an important one for the community. Several doctors say they are unlikely to be appeased by any half-hearted measures, such as deploying security at prominent Mumbai hospitals. They want security to reach the hospitals away from media and political attention. “In peripheral colleges, we get poor levels of security and funds. People are also very aggressive. There is agreement on this – that we cannot have a situation where far-off colleges like ours are promised help in a few weeks. There must be uniform security and at the same time, all over Maharashtra,” says Pillai.

Even as this solidarity and organisation grows – a pan-India dimension is taking shape with doctors in Delhi, UP, Gujarat, Karnataka and Kerala all coming forward to express support – doctors have been handed out expulsion or eviction notices en masse. Some notices were slipped into their hostel rooms, some pasted on their doors and some were kept in a stack in faculty rooms, with doctors asked to collect it.

“JJ Hospital in Mumbai is an important one as all VIPs and politicians come here. Even JJ Hospital has not been provided security, despite the assurances of the court and chief minister this week. But even if we get security here in JJ Hospital, it should simultaneously happen in others. We should not be appeased while peripheral colleges get left behind,” said a resident doctor from JJ Hospital.

Support from doctors around India

On Thursday (March 23), Fadnavis gave assurances of support and security to the doctor community, which came after statements by Maharashtra’s medical education minister, who warned doctors to resume work or face a salary cut. Fadnavis promised a legal cell and the state informed the high court that it was ready with armed guards and Rs 33 crore for the recruitment of more personnel.

The first incident of assault this month was in a hospital in Dhule, Maharashtra. A doctor there had advised the family of a patient with a head injury to transfer him to a better facility. The police arrested eight men for the assault and vandalism. Shortly after, in two separate incidents, doctors at Sion Hospital were assaulted after an elderly patient with kidney disease died.

As the medical community prepares to meet the chief minister today, doctors around India send in their support and are on standby to intensify their own protests. “We don’t want a pan-India agitation. But Indian Medical Association chapters around the country are just waiting for word from us,” says IMA Maharashtra president, Dr Parthiv Sanghvi.

Doctors in Delhi have come to work, but are wearing black bands on their arms. They took the day off yesterday in protest. On Wednesday, doctors came in to work but wearing helmets and other protective gear. “Several times in the past we have been given assurances on our safety but nothing has happened. We need to agitate even in Delhi, depending on how it goes in Maharashtra,” says Dr D.S. Meena, president of the Resident Doctors Association at Ram Manohar Lohia Hospital in Delhi.

The doctors have a few common demands. They want armed personnel guarding hospital premises and an alarm system so that the security can be immediately alerted. They also want only two passes to be given to relatives of patients, who should be allowed to visit only in defined hours. The Maharashtra high court has also asked for a committee to be set up to monitor these measures. The doctors want to be on that committee. They also want the suspension, expulsion and eviction notices to be withdrawn.