Demonetisation, Economic Slowdown May Have Led to Rise in Infant Mortality Rate: Study

Between 2016 and 2018, overall infant mortality increased in Chhattisgarh, Jharkhand, Madhya Pradesh and Uttar Pradesh despite sustained improvements in household access to sanitation and clean fuel, the study said. 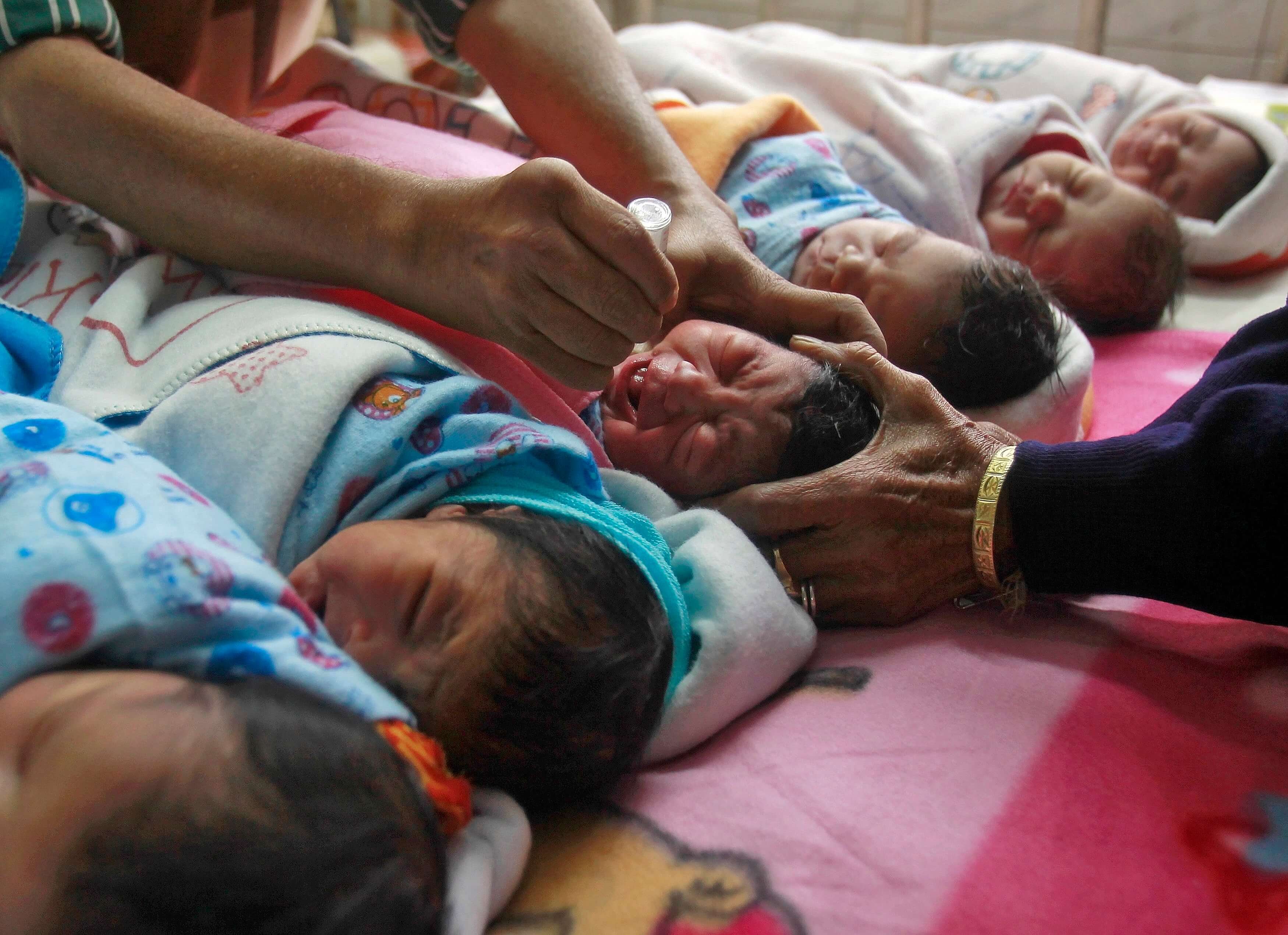 File Photo: A medical worker administers polio drops to an infant at a hospital during the pulse polio immunization programme in Agartala, India, January 18, 2015. Credit: Reuters

New Delhi: Demonetisation may have led to a rise in infant mortality rate in large parts of India in 2017 and 2018, suggests a new study that cites government data to show that apart from the note-ban, a subsequent economic slowdown had an adverse impact on child health.

Between 2016 and 2018, overall infant mortality increased in Chhattisgarh, Jharkhand, Madhya Pradesh and Uttar Pradesh. This was despite sustained improvements in household access to sanitation and clean fuel, the study highlights.

The study, titled ‘Pauses and Reversals of Infant Mortality Decline in India in 2017 and 2018’, analysed data from the sample registration system (SRS) – a country-wide survey which tracks vital events such as birth rate, death rate and infant mortality rate, in a panel of villages and urban blocks. It is co-authored by Jean Dreze of Delhi School of Economics, Delhi University; Ashish Gupta of University of Pennsylvania; Sai Ankit Parashar of Tata Institute of Social Sciences; and Kanika Sharma of Emory University.

Also read: How Safe Are India’s Children From COVID-19?

According to the study, at least 129 out of every 1,000 infants died in 1971, when the SRS started monitoring mortality. Four decades later, in 2011, infant mortality had declined to about 44 deaths per 1,000 live births. However, these improvements are not continuous, the report noted. Annual estimates of infant mortality from the SRS are representative at the national level and for the larger states.

Infant mortality rate (IMR) is the number of deaths per 1,000 live births of children under one year of age.

The study found that the pace of decline of India’s infant mortality rate (IMR) stagnated in urban areas in 2017 and 2018. Overall infant mortality increased in the states of Chhattisgarh, Jharkhand, Madhya Pradesh, and Uttar Pradesh, while stagnating for at least a year in seven other states.

This sort of faltering of IMR decline has not been observed in the SRS for many years. That’s why the data is even more alarming because even after the government’s efforts to improve sanitation and LPG access, the progress made to check infant mortality has reversed in some states.

The report stated: “One possible reason for this setback is that, aside from its adverse effects on poverty and employment, India’s shock demonetisation in November 2016 and the subsequent economic disruption also had a negative impact on child health.”

To understand infant mortality trends in India, the report highlighted two noteworthy patterns shown in Figure 1 below. First, pre-2005, year-to-year fluctuations in infant mortality were common. However, from 2005 onwards, IMR declined consistently in rural as well as urban areas, year after year, until 2016. Second, the pace of IMR decline was faster between 2005 and 2016 than in earlier periods. After 2016, the declines were modest again. 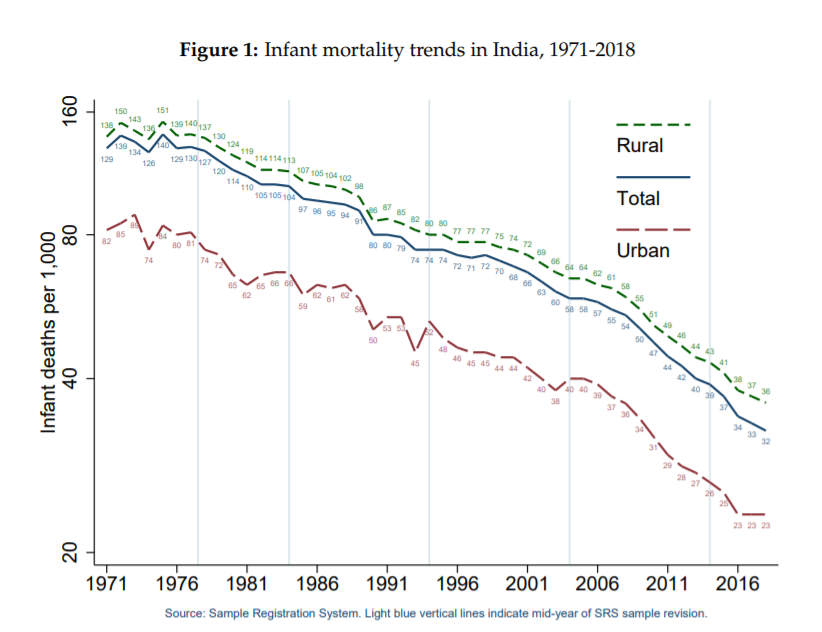 In 2017, reversals of infant mortality decline at the state level were largely confined to urban areas, but in 2018 similar reversals also happened in rural areas in several states, the study noted.

On asking why slowdown of infant mortality decline in 2017 and 2018 was more pronounced in urban areas, co-author of the research paper, Ashish Gupta, said, “There were other improvements in rural areas in these years, such as in sanitation and LPG access, that are very important for child health.”

“Had the 2005-2016 trend in IMR decline continued till 2018, we would have seen lower infant mortality rates in those years,” it observed.

In Figure 2 below, the decline in infant mortality faltered in eight of these 20 states in 2017. In 2018, it faltered in six states, including Chhattisgarh, Jharkhand, Madhya Pradesh, and Uttar Pradesh, where IMR increased. 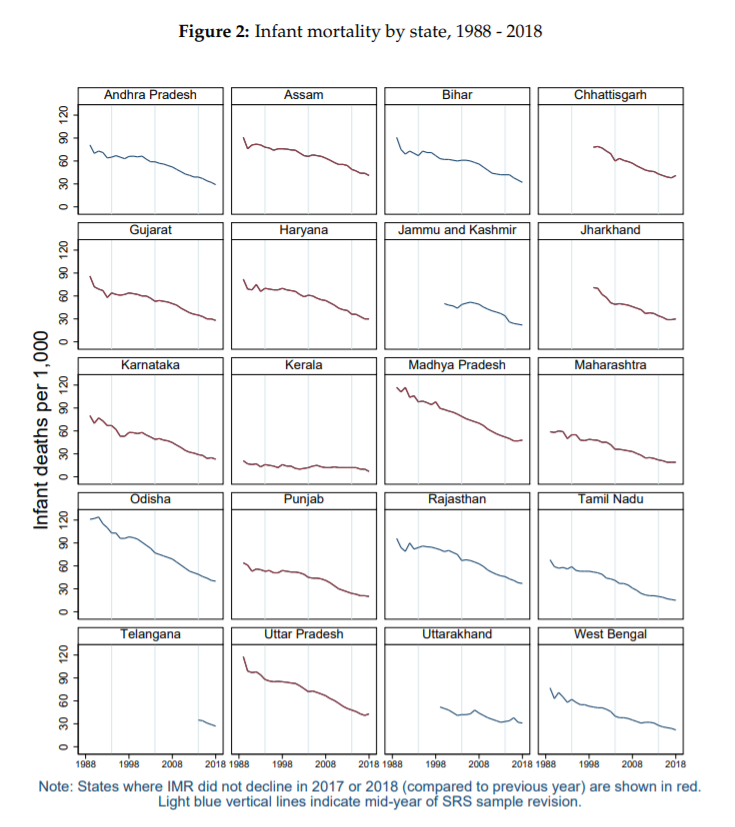 Also read: The Coronapocalypse and Sanitation Workers in India 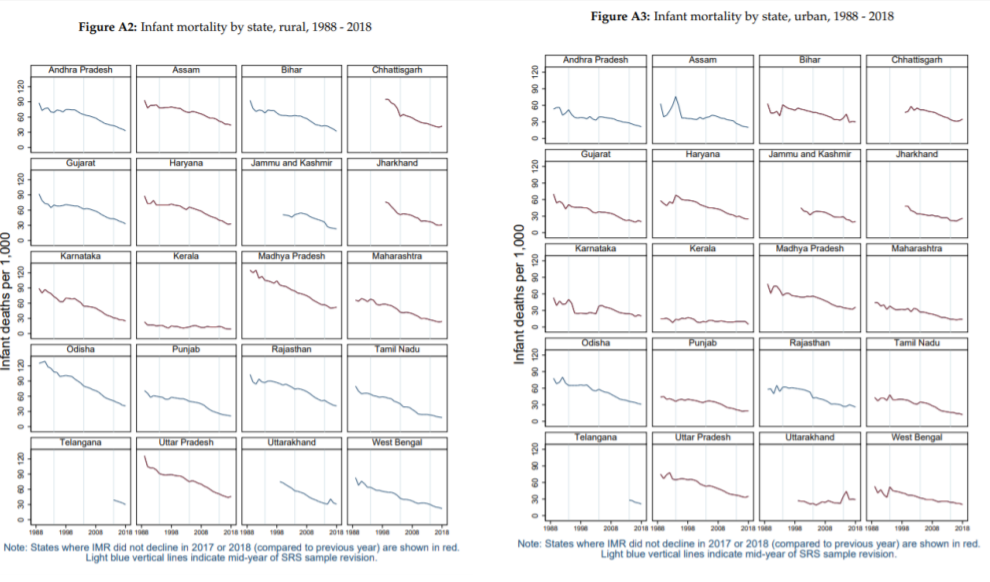 The above data represents 78.5% of India’s urban population and 49.5% of the rural population, respectively. The study showed the states where overall IMR faltered in 2017 or 2018 constitute 56.4% of India’s population.

The research paper attributes the cause of stagnation of decline in infant mortality rate to demonetisation in 2016. According to news reports, demonetisation led to at least five million people losing their jobs, and this was followed by another data which showed unemployment rate at a 45-year high.

The paper also attributed the reversal of infant mortality decline to “virtual stagnation of real wages in rural areas between 2014-15 and 2018-19, compared with the preceding 10 years when they were rising steadily.”

The analysis comes amid a period when India is already dealing with the COVID-19 pandemic, which has witnessed an unprecedented decline in the country’s growth rate and a mass exodus of the most vulnerable class – the migrants. The nationwide lockdown led to mass unemployment and a major disruption of public health services, including antenatal care and child immunisation.