Open Drains Are One of Delhi's Biggest Sanitation Problems

On studying three unauthorised colonies, it was found that the incidence of children's diarrhoea was related to the lack of safe excreta disposal systems. 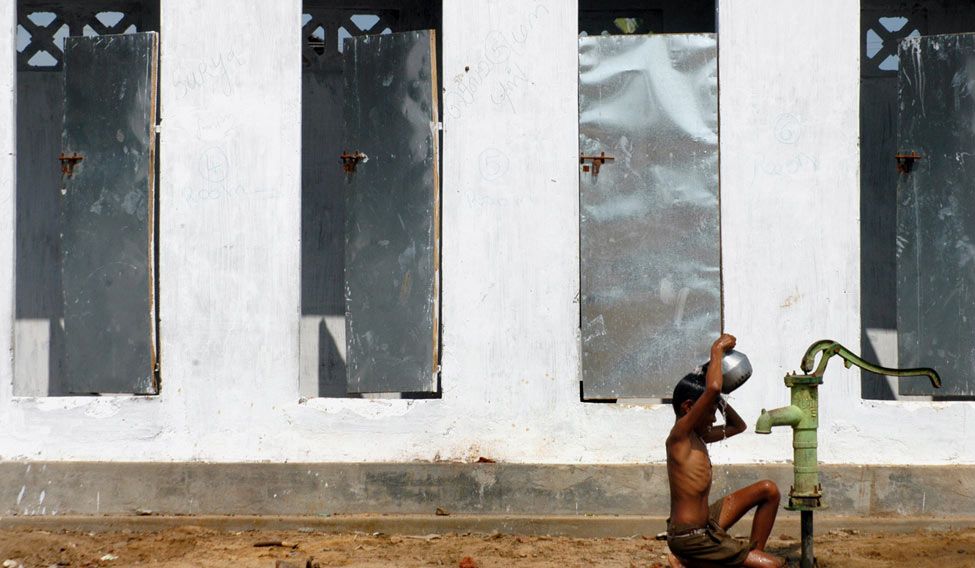 New Delhi: Inside northeast Delhi’s Janta colony, each bylane is an obstacle course of health hazards. From the often overflowing open drains that line the narrow alleys to low-hanging wires and parcels of garbage strewn carelessly along the streets, the residents face a sanitation crisis that warrants immediate attention. Drains full of waste water run past houses, barely a few inches from the doorways. The retaining walls of these cemented conduits are no protection against spillovers precipitated by monsoon rains; the three strikes in Delhi declared by sanitation workers between June 2015 and February 2016 were enough to severely disrupt the regular clearing that these drains require, turning them into stagnant channels of festering sewage. In the absence of open spaces, these streets double-up as playgrounds for children, conflating the joys of playing with the risk of contracting debilitating infections.

According to the Mission Convergence Survey conducted by the Delhi government in 2012, a staggering 56% of children in the city’s unauthorised colonies and slums defecate in the open, compounding the sanitation crisis. Environmental pathogens that spread through open defecation are often manifested in the form of diarrhoeal infections. Diarrhoea is the third leading cause of childhood mortality in India and, as of 2013, India accounted for a quarter of diarrhoeal deaths among children across the world. In 2015, India reported the highest number of deaths caused by diarrhoea and pneumonia among children under the age of five globally, according to a study by the International Vaccine Access Centre at the Johns Hopkins Bloomberg School of Public Health. The problems persist even though the disease can be tackled through basic interventions such as encouraging hand washing and water treatment by households. A 2014 study by Michael Geruso and Dean Spears argued that differences in sanitation exist between Hindus and Muslims, resulting in varying incidence of open defecation, and therefore have differing implications for children’s health outcomes. In fact, a later study by Geruso and Spears even suggested that the low incidence of open defecation among Muslims is responsible for the Muslim mortality advantage: lower incidence of child mortality is observed among Indian Muslims, in spite of their often lower socio-economic status.

Based on these studies, our initial objective as student researchers was to understand whether open defecation was an outcome of preferences or of compulsions resulting from the absence of water, sanitation and hygiene facilities. Our study, conducted between June 2015 and February 2016, aimed to assess whether there is a difference in the health outcomes of children, specifically the incidence of diarrhoea among children below 13 years of age, between low-income settlements with high concentrations of Hindus and Muslims respectively. The localities surveyed were chosen based on their religious composition as per the Religious Census of Delhi, 2011. Jafrabad (a Muslim-dominated locality) and Mangolpuri (a Hindu-dominated locality) are low-income settlements located in northeast and northwest Delhi respectively. Janta Colony, populated by both Hindus and Muslims, is a low-income residential area in northeast Delhi. This selection offered a range of conditions to examine the relationship between religious preferences and toilet use. However, our survey of 300 households in all these localities unveiled little incidence of open defecation. While this may have been due to under-reporting or misreporting arising from social desirability bias, interactions with ASHAs (Accredited Social Health Activists) and doctors residing in these localities suggested that the practice has become increasingly rare over the last 10-15 years. Even so, there seemed to be sizeable differences in the share of households in each locality reporting diarrhoea incidence among their children in the past one month. In our search for one explanation, we discovered another: the scourge of open drainage systems.

A 2002 study by S.K. Karn and H. Harada found that the absence of sewage and safe excreta disposal facilities among slum, squatter and pavement-dweller communities in Mumbai manifested in the high occurrence of waterborne diseases including diarrhoea, typhoid and malaria. Existing public health research has found that safe excreta disposal systems may even be more important as a safeguard against disease than hand-washing habits. These studies suggest a high correlation between health and environment, “even when socioeconomic variables are held constant”.

The menace of open drains

At least until ten years ago, incidence of open defecation among Hindus was higher than Muslims in both rural and urban India. Even though our review of literature directed us towards health and sanitation problems surrounding open defecation, the intersection of various domains ensured that we cast a wide net in terms of collecting data. Our surveys took us through the respondents’ access to and quality of water supply, sanitation and health facilities, as well as social beliefs and practices. Through observation and anecdotal evidence, we encountered the problems caused by open drainage systems.

The findings from our survey suggest that the incidence of diarrhoea, (taken as average number of diarrhoeal episodes per child) was highest in Janta Colony, followed by Jafrabad and then Mangolpuri. The percentage of households reporting any incidence of diarrhoea followed a similar trend and was highest in Janta Colony (60%) and Jafrabad (48%), followed by Mangolpuri (30%). Based on the literature suggesting greater open defecation among Hindus, one might have expected the burden of the disease to be worse in Mangolpuri, leading to a higher incidence of diarrhoea. Given the apparent absence of the practice of open defecation in all three localities, we believe that the observed trends could be related to the state of drainage facilities. Households claimed that drains were not cleaned on a regular basis and were hazards to the community in general. According to the respondents, this was likely to have been exacerbated in the past year (2015-16) due to frequent strikes by sanitation workers, as a result of which drains were not cleared for up to a week, causing spillage of waste and accumulation of garbage on the streets. This could probably explain the paradox we noticed – Mangolpuri, which has covered drains, did not face this health hazard.

Anecdotal support for our study provides a useful context to our data findings: discussions with doctors, anganwadi workers and ASHAs provided a better understanding of the general trends in water supply and sanitation practices prevalent in the area. The broad picture that emerges indicates that over the past 10-15 years, these localities have witnessed an increased level of awareness and education about hygiene. However, the positive effects of these factors are dampened by the lack of public sanitation infrastructure: drainage in particular and clean water supply.

According to the World Bank, despite being well endowed with water, Delhi’s water supply is erratic and unequally distributed; its residents receive water for only a few hours a day, while many cities in sub-Saharan Africa provide better services to their citizens even with much less water. Having water flow regularly through pipes ensures better quality of water by preventing pollutants from being sucked in, thus making an erratic water supply a major public health hazard. Some studies suggest that while quality of water is indeed an important cause of infectious diseases, inadequate water supply can result in similar disease environments by preventing households from maintaining better sanitary conditions. Open drains also pose a fairly widespread problem. Figures from the 2011 Census indicate that for 37.3% of households in urban India, waste water is released from the house through an open drainage system. Even in Delhi, 36.6% of households had open drainage systems and 4.2% had no drainage at all.

As public health policy in India turns towards issues of sanitation, it is critical to identify the root causes of diseases such as diarrhoea that are rife despite being easily preventable, so that policy initiatives can be better targeted and more successful. Several studies, including a multi-country analysis in 2008, revealed that a greater burden of diarrhoea is associated with increased risk of stunting, where the child is shorter than the normal height for her age. Diarrhoeal infections in children from poor regions during their first two years might cause an 8 cm growth shortfall and a ten IQ point decrement on average before they reach the age of ten. Malnutrition in Zimbabwe has been found to reduce lifetime earnings by 12% due to the effect on schooling. Given our findings and observations, and the literature on sanitation and water supply, we are inclined to believe that the state of public infrastructure plays a crucial role in determining child health outcomes through its impact on the reduction of infections. Keeping in mind the impact of early childhood health on life outcomes and human capital, this is a public health issue with far-reaching implications. With initiatives such as Swachh Bharat Abhiyan attempting to address open defecation and improve toilet access, there is a need for a simultaneous focus on improving the drainage systems that these new toilets will connect to and to recognise that sanitation issues are closely interlinked with the goal of maximising the advantage of India’s demographic dividend.