Will the Number of COVID-19 Cases in Delhi Be Less Than Earlier Projected?

Amit Shah said on Sunday that contact tracing and the creation of containment zones will stem the spike. 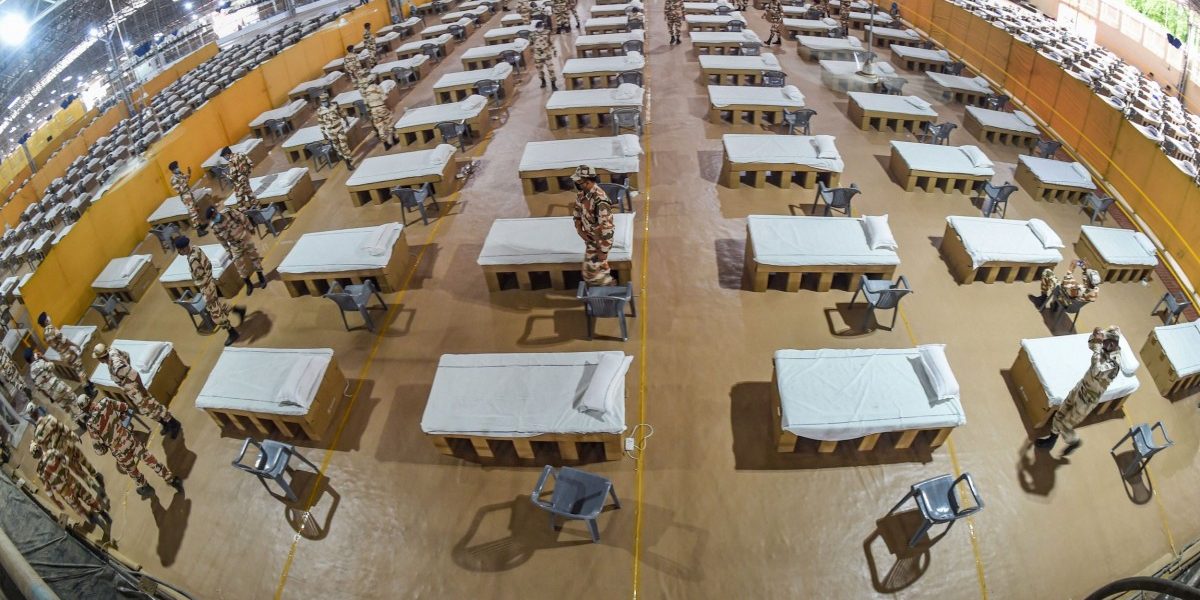 The Radha Soami Beas centre in Delhi that has been turned into a COVID-19 care facility. Photo: PTI

New Delhi: On Sunday, Union home minister said there were several reasons for believing that the number of COVID-19 cases in the national capital may fall well short of the 5.5 lakh mark that was earlier estimated by health experts. He based his reasoning on an increase in contact-tracing, saying that along with the creation of containment zones will prove effective in curbing the spread of the novel coronavirus.

In an interview to news agency ANI, Shah said a major reason for Delhi’s ability to keep the final tally of cases low will be the efforts that have been put in place. He also noted that the Arvind Kejriwal government, municipal bodies and the Centre are working in tandem. Also, to ensure a direct chain of command, deputy commissioners of districts have been put in charge of work in their area.

Till Saturday, Delhi had recorded COVID-19 80,188 cases, and was second only to Maharashtra in the total number of cases. But after leading in new cases by a big margin for nearly 10 days, the national capital also recorded a marked fall in new cases, with 2,948 infections being reported in the previous 24 hours. Its death toll climbed to 2,558 with 66 more people dying due to the virus over the previous day.

In keeping with the earlier projections, Delhi has so far created 30,000 beds for COVID-19 patients. In doing so, it has also set up one of the biggest facilities with 10,200 beds at the Radha Saomi Satsang Beas campus in Chhattarpur.

This facility will have 18,000 tons of air-conditioning, 600 toilets and witness the deployment of 1,000 doctors from ITBP and other central armed police forces. Divided into 50 enclosures with 200 beds each, it would also have oxygen facilities along with some of the beds.

Incidentally, while Delhi has ramped up the number of beds, as it is targeting 80,000 beds by July end, the improvement in recovery rate to around 61% which led to 2,200 people being discharged over the last 24 hours has meant that over 70% of the bed space created for COVID-19 patients remains unutilised.

Testing has been nearly trebled

With Delhi also having almost trebled its testing rate to 19,000 per day from around 6,000 till earlier this month, the data points reveal that the total number of positive cases may not reach as high as projected.

Also read: Timeline: How Did India Get to More Than Half a Million COVID-19 Cases?

In the beginning of June, the Arvind Kejriwal government had first sealed the borders for a week and then also passed a decision to not allow patients from other states to take admission in Delhi government hospitals. The ruling was turned down by the Lieutenant-Governor in his capacity as chairperson of the Delhi Disaster Management Authority.

The Kejriwal government’s fear was that people from other states would clog Delhi’s hospital space, leaving no beds for its own citizens. While accepting the L-G’s decision, Kejriwal had said that probably the city would have to prepare beds for twice as many people as projected in the DDMA meeting.

No rush of people from other states

But a look at the number of vacant beds in Delhi’s hospitals and new health spaces reveals that the fears may have been unfounded.

Delhi is surrounded on one side by Uttar Pradesh and on three sides by Haryana. Of the districts of UP which share a border with Delhi, Gautam Budh Nagar – of which Noida and Greater Noida are a part – has reported the highest number of 2,072 cases in the state. On Saturday, it had 915 active cases. Another 1,136 patients have been discharged so far, 21 have succumbed.

While Gautam Budh Nagar district reported 127 new cases in the previous 24 hours, 97 patients were also discharged. And with few of the active cases requiring hospitalisation, there was little movement to Delhi. Also, Gautam Budh Nagar showed a slight improvement in the recovery rate to 54.62% on Saturday from 53.39% on Friday.

Ghaziabad, which also shares its borders with Delhi, has the second highest number of active and total cases among all the districts in UP. Till Friday, it had reported 1,333 cases of which 69 tested positive over the previous 24 hours. The district has also witnessed 50 deaths and had 680 active cases. Here again, testing has been ramped up and around 18,000 samples have been taken so far. While the district has shown a recovery rate of 45%, the troublesome part is that the number of deaths due to COVID-19 shot up from four on May 31 to 50 on June 26.

However, the district has now designated a number of private hospitals as COVID-19 dedicated and this is preventing any mass movement of patients to Delhi.

Almost all of Haryana’s districts with highest cases border Delhi

In Haryana too, most COVID-19 cases were being reported from the districts and cities surrounding Delhi – namely Faridabad, Gurugram, Bahadurgarh and Sonipat.

The highest number of cases here were reported from Gurugram, where 5,070 people have tested positive, of which 1,519 were active cases while 83 people have died. Of those down with the virus, 69 are undergoing treatment in hospitals while 383 are being kept under observation at dedicated healthcare centres. Similarly, Faridabad also reported only 191 cases during the past 24 hours.