B.1.617 Is Becoming the Dominant Variant in India – and Creating Fears of a Global COVID Surge

The WHO said the 'variant of concern' had been detected in samples from 44 countries. 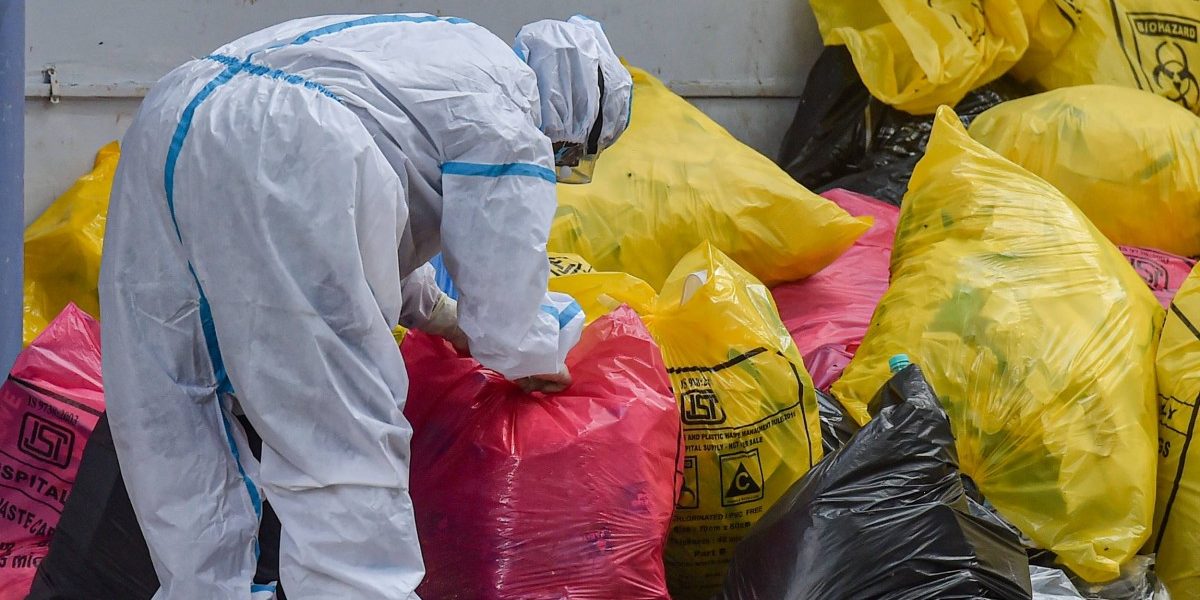 A medical worker sorts medical waste before sending for disposal, at a COVID-19 hospital in Kolkata, Tuesday, May 18, 2021. Photo: PTI/Swapan Mahapatra

Bengaluru: People, including experts and leaders, around the world are growing concerned as reports of the B.1.617.2 variant of the novel coronavirus are showing up in samples in their countries.

B.1.617 is the technical name of the variant first reported from India. This branch of the virus’s mutation tree has three offshoots, or sub-lineages: .1, .2 and .3. Of these, B.1.617.2 has been designated a ‘variant of concern’ in the UK, and B.1.617 a ‘variant of concern’ in Canada. Scientists have also said based on preliminary data that this variant could be 50% more contagious than the B.1.1.7 variant, first reported from the UK.

Countries that have reported the presence of the B.1.617.2 variant thus far include Angola, Australia, Brazil, Germany, Guadeloupe, Indonesia, Japan, Jordan, Nepal, Singapore, South Africa, Spain, Thailand, Uganda and the US – apart from the UK and India.

On May 10, the WHO declared the variant to be of ‘global concern’. Two days later, the body said the variant had been detected in samples from 44 countries in all, lying in all six regions into which it has divided its administration.

(Note: An older definition of a ‘pandemic’ was epidemics of the same disease in at least three of these six regions.)

Nepal, Singapore and the UK

Two of the latest countries to report B.1.617.2 in their populations are Nepal and Singapore.

The mountain kingdom’s Ministry of Health and Population had recently collected 35 samples and sent them to the Institute of Genomics and Integrative Biology (IGIB), New Delhi, for whole-genome sequencing. According to The Kathmandu Post, IGIB found that 34 samples had the B.1.617.2 sub-lineage while the remaining one had the B.1.617.1 sub-lineage.

(According to ANI, another neighbouring country, Pakistan, has detected a previously unknown variant in 15% of the country’s samples, but that the country lacks the resources to determine its genomic identity. The Pakistani government has also formally denied the presence of the B.1.617 variant within its borders.)

The Government of Singapore has decided to shut all schools from Wednesday (May 19) after its health minister Ong Ye Kung said that B.1.617 “appeared to affect children more”, LiveMint reported. Education minister Chan Chun Sing has also said that the city-state plans to vaccinate students younger than 16 years.

Genome-sequencing efforts in India are finding that the B.1.617 variant is becoming the dominant strain in the country, and may be partly responsible for the devastating second COVID-19 outbreak.

Scientists who sequence genomes from viral samples upload them to the international GISAID database, which is public. According to GISAID, Indian scientists have uploaded 2,247 sequences from samples containing one of the B.1.617 off-shoots. The next-highest number of submissions are from the US, with 772.

The UK has uploaded the highest sequences thus far of B.1.617, with 3,706. According to The Daily Mail, the Wellcome Sanger Institute, Hinxton, collected viral samples from April 25 to May 8 from 50 districts in England. Of them, according to the tabloid, B.1.617 was the “dominant strain” in at least 23 districts.

At the higher end, 100% of samples from Hart indicated the strain’s presence, although it only reported three cases. In Bolton, which had the most number of cases in the 50 districts, 81% of samples had B.1.617.

The WHO’s chief scientist Dr Soumya Swaminathan said a couple weeks ago that B.1.617.2 may also be “dodging vaccine protections”, AFP reported, and that it was a matter of concern that India had until then fully vaccinated only 2% of its population. (This figure is currently 3%.)

The spread of B.1.617 has further complicated the world’s COVID-19 vaccine rollouts – or simplified, in a manner of speaking.

Jacobin reported on May 9 “that 130 countries are yet to receive a single dose, while rich countries have secured enough to vaccinate their populations many times over – five times in Canada, almost four in the UK and twice in the US.” Jeremy Farrar, director of the influential Wellcome Trust, tweeted on May 18 that “until everyone is safe, no one is safe”.

Taken together, even highly vaccinated populations in the richer countries may be unable to reap the full benefits of their inoculation – since variants may reenter their populations through people travelling to and back from poorly vaccinated countries.

Also read: How Long Should a Person Exposed To COVID-19 Stay in Quarantine?

In India itself, the Centre has stopped short of imposing large-scale travel restrictions, although some state-wide lockdowns have restricted movement within. The number of cases is currently rising exponentially in Karnataka, Tamil Nadu and Uttarakhand, among other areas. States that have institute lockdowns are Andhra Pradesh, Chhattisgarh, Delhi, Haryana, Jharkhand, Kerala, Maharashtra, Uttar Pradesh and West Bengal. Some others have imposed curfews.

Testing in India is concentrated in urban centres. As a result, testing data has failed to give a true impression of the spread of COVID-19 in rural India. The most affected cities at present include New Delhi and Bengaluru.

An interim guidance that the US Centres for Disease Control issued in February 2021 said: “In a large contact tracing study, no contacts at high risk of exposure developed infection if their exposure to a case patient started six days or more after the case patient’s infection onset.”

But in this first week or so, if the person displays no symptoms, doesn’t follow COVID-appropriate behaviour and no systematic programme requires them to get tested, their body could transmit the virus to susceptible others. This is part of the basis for demands that everyone is vaccinated everywhere (and one reason why Taiwan’s ‘virus blockade’ failed).

Jason Kindrachuk, a virologist at the University of Manitoba, Canada, told National Geographic last month that “the holy grail of vaccine development” is called sterilising immunity – the sort of immunity that “stops the microbe from getting into cells in the first place.” As a result, the virus will fail to replicate and the person also won’t be able to transmit viral particles to others.

Clinical trials for the Pfizer-BioNTech and Moderna mRNA vaccines, the Johnson & Johnson, Oxford-AstraZeneca and Sputnik V adenovirus-vector vaccines, and the Bharat Biotech inactivated-virus vaccine all checked for the shots’ ability to protect against severe disease. The trials didn’t check if the vaccines could provide sterilising immunity.

But real-world data and research reports published in the US have indicated a considerable likelihood that the vaccines used in this country also reduced transmission. These vaccines are the Pfizer-BioNTech, Moderna and Johnson & Johnson ones. Researchers around the world have also found evidence that the Pfizer-BioNTech vaccine in particular could be effective against the B.1.1.7 variant.

In India itself, the bulk of the vaccines in use in descending order of availability are Covishield (Oxford-AstraZeneca), Covaxin (Bharat Biotech) and Sputnik V (Gamaleya Institute, Russia). Thus far, the vaccine manufacturers have not shared any data about whether they provide sterilising immunity – including against the B.1.617 variant and its sub-lineages.

Also read: The Centre Has a New Vaccine Procurement Plan. It Looks Like a Paper Tiger.

Experts have stressed that the next steps of India’s vaccination programme need to be to secure enough doses to fully vaccinate the 45+ years cohort and begin vaccinating the 18-44 years cohort.

Vinod K. Paul, who heads the National Expert Group on Vaccine Administration for COVID-19 (NEGVAC), has also said Bharat Biotech will start a clinical trial of Covaxin for children in early June 2021.

The Centre has also found itself in hot water over its mechanism to catch adverse events following immunisation (AEFIs) – adverse side-effects that may be related to taking the COVID-19 vaccines. It released an ‘advisory’ for people with adverse events to report their symptoms to their respective vaccination centres only on May 17, four months after the vaccination drive began.

Doctors have already said that the advisory is flawed, The Dialogue reported, because it admits reports only 20 days after receiving the vaccines. As a result, it will automatically exclude any side-effects that may mature over a longer period of time.