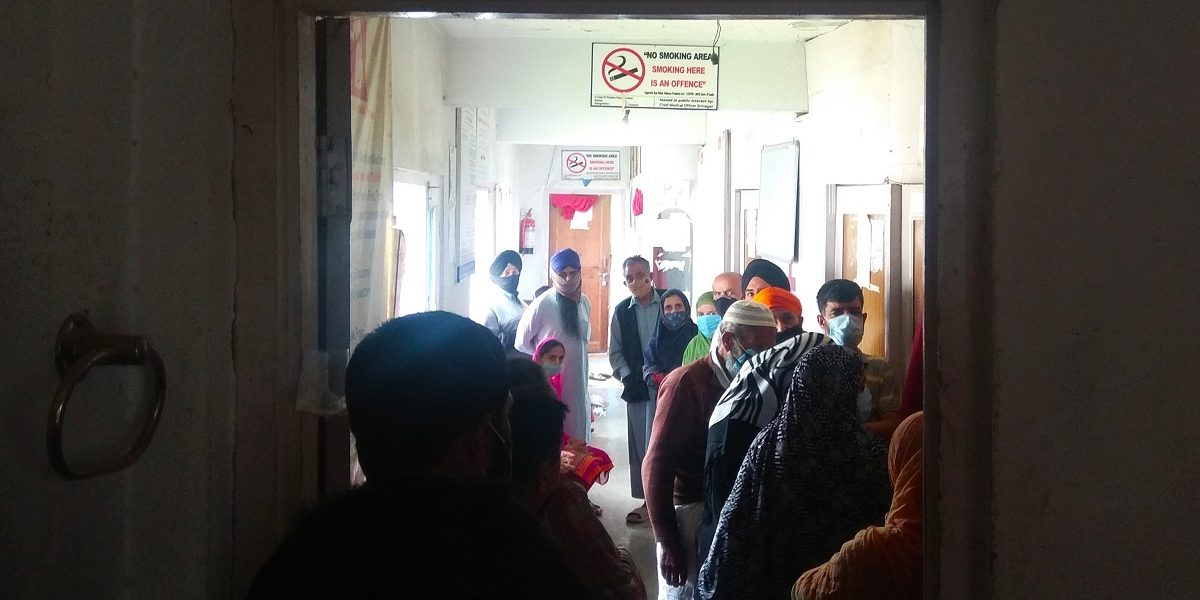 Srinagar: The shortage of COVID-19 vaccines has badly hit Kashmir, barely two weeks after the Centre-controlled administration in Jammu and Kashmir rolled out the vaccination for the 18-44 age group. On Sunday, official statistics show that not a single dose was administered in the ten districts that fall under the Kashmir division of the Union Territory.

The vaccination drive, however, in the less populated Jammu division is going on unhindered, raising questions over equitable distribution between the two regions.

On Sunday, 28 persons died and 2,451 tested positive for the coronavirus infection in Kashmir.

However, not a single soul of the 5.39 million adults in the valley was inoculated during the day.

Both Kashmir and Jammu regions comprise 10 districts each. The former, however, has around 2 million more people living in it.

The government’s daily data sheet for COVID-19 vaccination on Sunday had zeroes marked next to the 10 districts of Kashmir. The Jammu division, however, managed to vaccinate 9,144 people during the day.

Official data accessed by The Wire shows a huge disparity in access to the vaccines in the two regions. 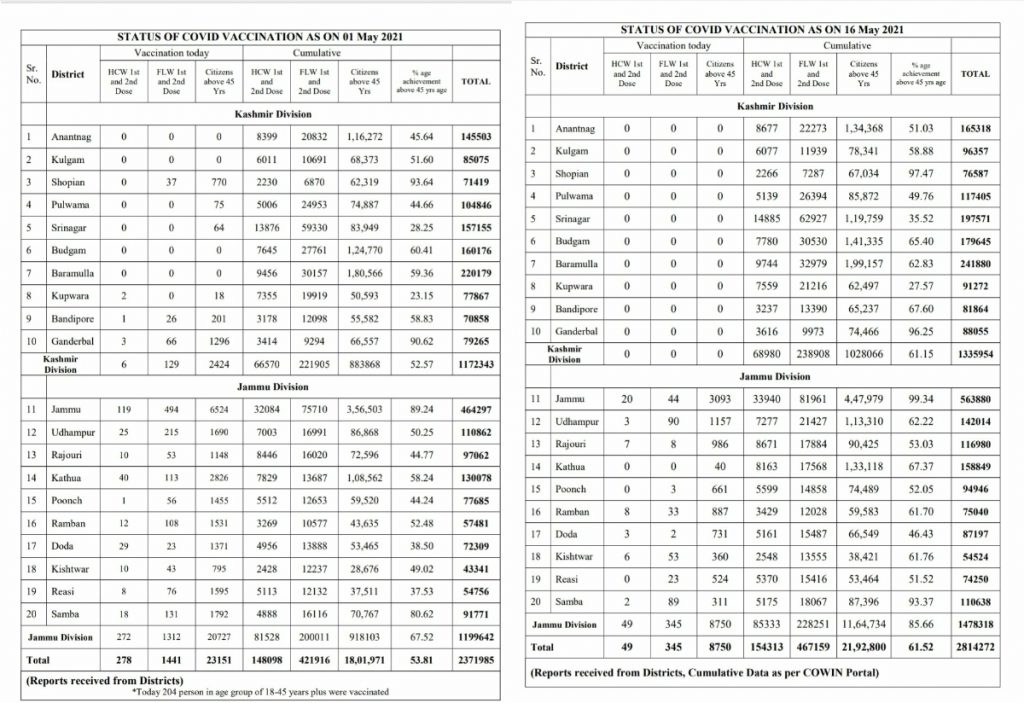 Until May 1, Kashmir and Jammu had administered 11.72 lakh and 11.99 lakh vaccination doses respectively. By then, Kashmir had inoculated 52.57% of its population above 45 years as compared to Jammu’s 67.52%.

Data for the last eight days has been particularly lopsided.

Co-WIN tracker shows steep decline in vaccination numbers over the past week in Srinagar.

No slots on Co-WIN

Given the shortage of doses, several vaccination centres have closed and the majority of the people in Kashmir are unable to book appointments on the Co-WIN portal.

Many who managed to book them in the first week of May found theirs cancelled arbitrarily. Allottees received messages informing them of the cancellation.

Among them was Mohammad Shafi, 42, a resident of Srinagar who had managed to book slots for him and his family at Natipora Sub Centre for May 6.

On May 4, however, Shafi received a message that the vaccination had been cancelled. A day later, he again booked slots for May 8, this time at a different centre.

“On May 6, I received another series of messages informing that the May 8 slots were cancelled too,” he said.

Shafi has since been unable to find a slot on the portal.

“I don’t understand why the government encourages us to get vaccinated when they do not have any doses,” he rued.

On April 30, the J&K government announced through on Twitter that the vaccination for the 18-44 age group will not begin from May 1, when the expansion kicked in across the country.

However, a day later, contrary to its own announcement, the J&K government rolled out the vaccination for the 18-44 age group.

Initially, it had set up 35 centres – 15 in Jammu and 20 in Srinagar. Thirty-three of those centres do not have any vaccines available now.

The Wire visited four of these centres in Srinagar, where officials said they had not received any supplies since May 8.

While the drive to cover the 45+ age group was going on in dribs and drabs, it too has now come to a deadend in Kashmir.

Privately-run vaccination centres have long suspended their services after they were told to procure doses directly from the manufacturers. 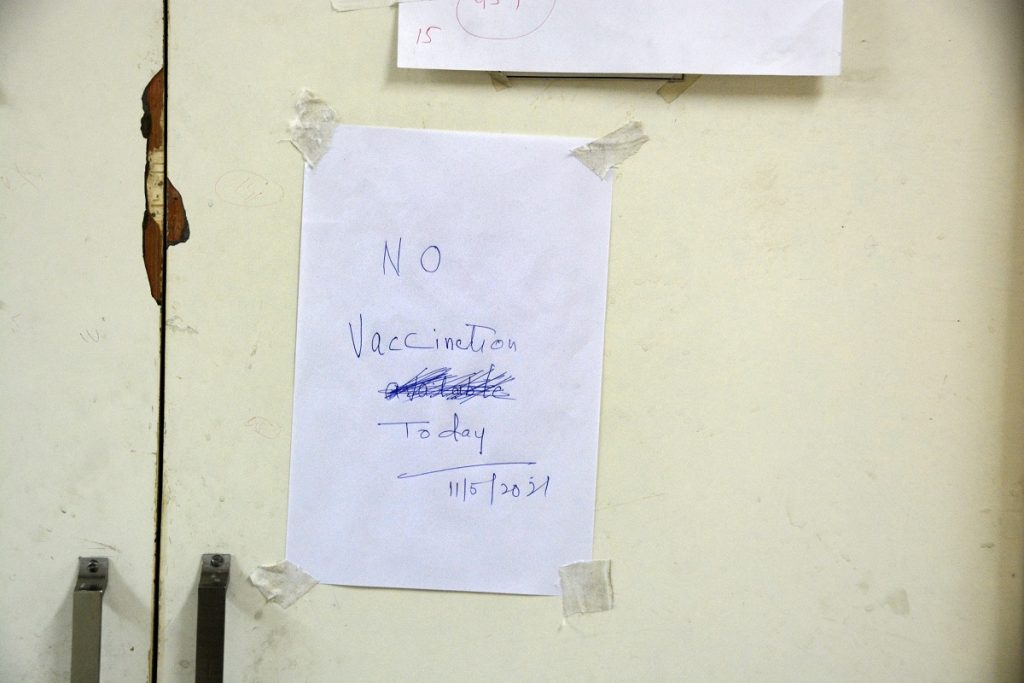 A poster outside a vaccination centre in Srinagar. Photo: Umar Ganie

Jammu has seen more deaths in this second wave as compared to Kashmir. Between April 1 and May 16, the region recorded 702 deaths and the valley has recorded 449 deaths.

Despite the lockdown as well as the efforts put in by the frontline workers, the fatality count has not been brought under control in the region.

Sources in the health department told The Wire that the administration has gone into an overdrive to cover 100% of the above 45 years population in Jammu.

For the past five days, every time The Wire contacted the officials concerned, their answers were either that “the supply is in transit” or “we should get more vaccines in a day or two”.

On May 11, Dr Shahid Hussain, extended programme immunisation officer (EPIO) for Jammu and Kashmir, told The Wire the vaccination drive “has gone into a slow phase”.

“The supply is in transit. We should get it in a day or two,” he added.

Asked about the quantity, the doctor said he was “not sure how many the Centre will send”.

On Sunday, however, Dr Hussain agreed that the doses had been exhausted in Kashmir.

Asked how Jammu did not face any shortage, he said the region was “slow to vaccinate people in the beginning whereas Kashmir performed well.”

Kashmir, he added, “Managed to exhaust its supply faster than Jammu.”

“Jammu too will run out of vaccines if the supplies do not come,” the EPIO said.

On May 11, Dr Saleem-ur-Rehman, J&K’s director general for family welfare and immunisation, had told The Wire that “there was no vaccine shortage”.

On Monday, he however said Kashmir had “used up” its quota.

Asked about the numbers in Jammu, he said: “In Kashmir, it was resistance followed by eagerness. But in Jammu, the numbers were always stable. On April 26, Kashmir used 50,000 doses whereas Jammu never touched that number in a single day. As a result, Kashmir has exhausted all its supply in a very short time.”

Amid this acute shortage, J&K lieutenant governor Manoj Sinha, in a meeting on May 15, set a deadline of 10-days to cover all those in the 45+ age group.

A day later, J&K chief secretary B.V.R. Subrahmanyam asked the administration to “ramp up vaccination centres to the maximum capacities for achieving universal vaccination in 45 years and above age group”.

“Regarding 18 to 45 years of age group, it was informed that supplies are being reinforced and arrangements be immediately put in place for targeted vaccination of vulnerable population,” read an official handout of the government’s PR department.

However, the government did not explain how it would cover 100% population in Kashmir when there are no vaccines available in the Kashmir region, where around 40% of 45+ population is yet to receive their first dose.

Nisar Ahmad Dharma is a journalist based in Kashmir. He tweets @nisardharma.