Vaccine manufacturers Serum Institute and Bharat Biotech have not yet communicated the date of delivery for orders placed by various states. 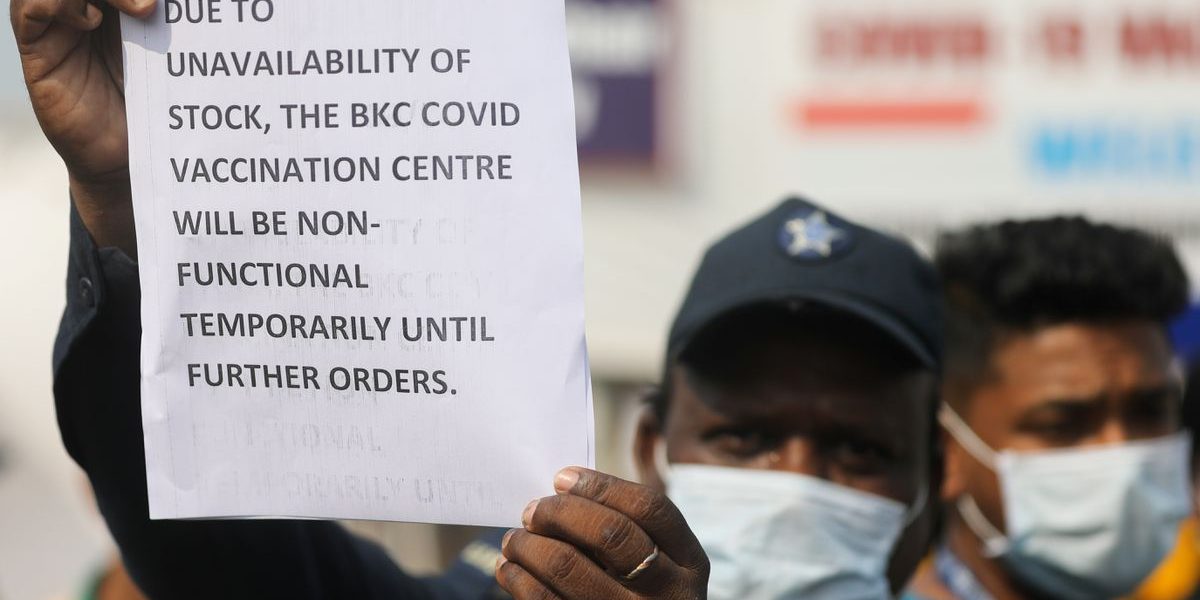 A guard holds up a notice to inform people about the shortage of coronavirus disease (COVID-19) vaccine supplies at a vaccination centre, in Mumbai, India, April 9, 2021. Photo: Reuters/Francis Mascarenhas

New Delhi: India’s expansion of its COVID-19 vaccination strategy to make all adults eligible to receive a shot is unlikely to begin on May 1 as manufacturers Serum Institute of India (SII) and Bharat Biotech have communicated to several state governments that they will only be able to deliver doses by the third week of May.

Reports published by three national newspapers suggest that while several state governments are sure that they will not be able to kick off the vaccination drive on May 1, they are unsure about when they will receive doses of the two vaccine candidates – Covishield and Covaxin, the former produced by SII and the latter by Bharat Biotech. Some states were informed that they will receive doses as late as July.

Delays in providing state governments and private hospitals with doses will hinder the vaccine rollout at a crucial time, with India reporting more than three lakh daily cases for the past week. The rapid rise in cases has overwhelmed the health care system, with hospitals across the country facing a shortage in beds and oxygen supply to patients.

According to Economic Times, Maharashtra health minister Rajesh Tope said that SII has informed his government that it would not be able to supply its consignment of 120 million doses until May 20. He said the company was not able to give the exact date of delivery. An official in Rajasthan told the newspaper that SII informed the state government that its order of 37.5 doses could only be supplied “after May 15”.

Meanwhile, Chhattisgarh health minister T.S. Singh Deo told ET that while the state has ordered 2.5 million doses of Covishield, SII has informed that the state that it will only be able to supply these doses in July. The government has asked the Pune-based company to at least provide a fraction of its order in May. “We would not be able to start the vaccination drive for 18-44 (year-olds) in early May,” Deo said.

Speaking to The Hindu, Deo also lashed out at the Centre for its policy. “Currently we are producing close to seven crore vaccines both including Covisheild and Covaxin. If half of this goes to the Centre, then only 3.5 crore doses are available for the states to vaccinate those above 18 years. The 18-45 years category is at least 35-40% of our population. Just 3.5 crore doses for them… this is a joke!” he said. 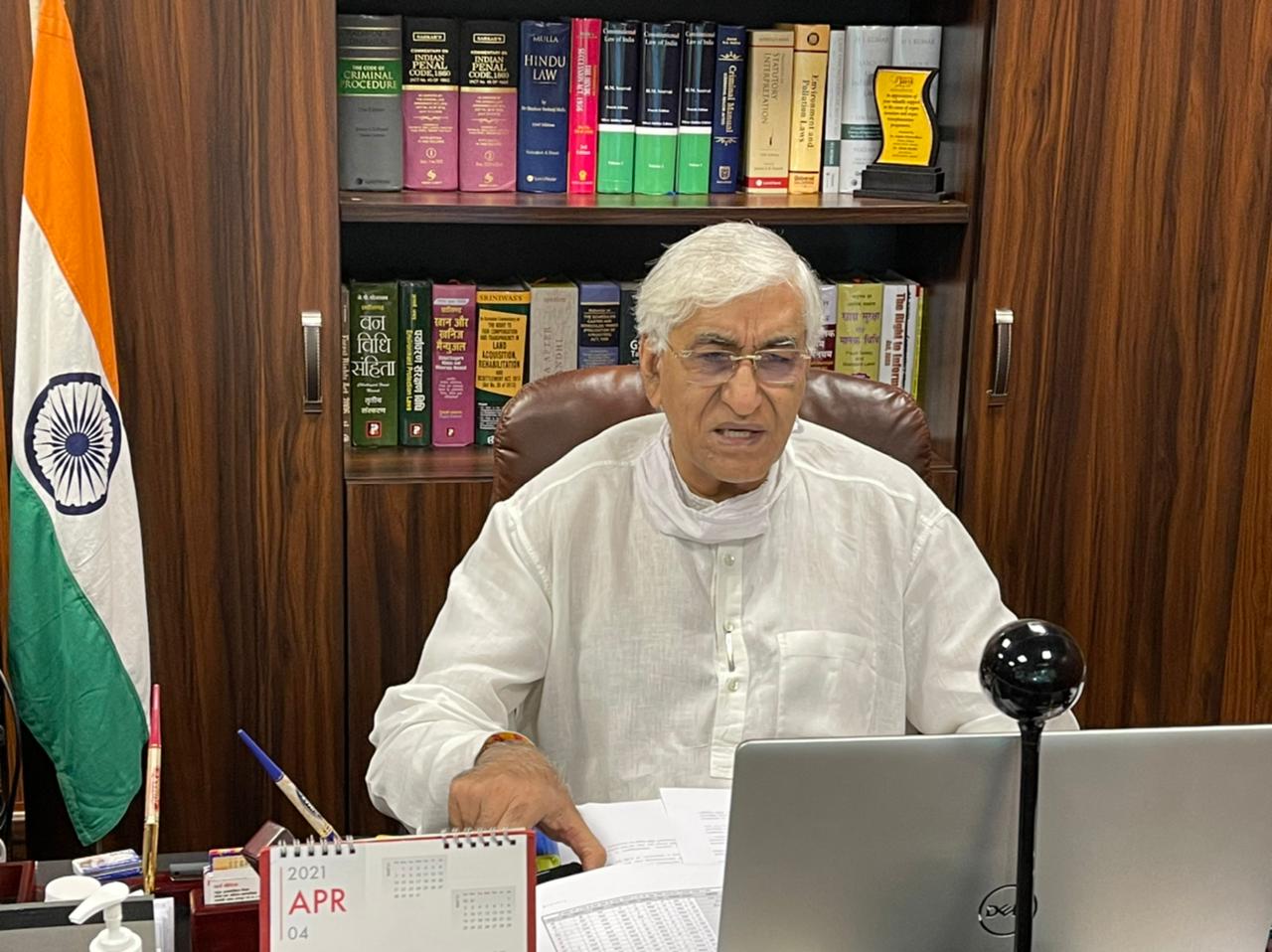 In Odisha, officials told the newspaper that they had placed orders for 37.7 million doses of Covishield and over a million dose of Covaxin. While there has been no communication from SII, Bharat Biotech informed the government it could supply the doses in mid-May, but did not provide an exact date.

According to Hindustan Times, Delhi, Punjab, Karnataka and Tamil Nadu are planning to launch their vaccination drives with the existing stocks, but are unsure about when their orders will be fulfilled.

Delhi has ordered 13.4 million doses, which will “likely arrive at least two weeks [after May 1]”. The government plans to begin the expansion with the existing stocks.

“We are preparing to vaccinate everyone above 18 from May 1,” Tamil Nadu health minister C. Vijayabaskar, told HT, but also said priority will be given to people who are scheduled to receive their second dose. The state is yet to place orders directly with the manufacturers, according to the newspaper.

Punjab chief minister Amarinder Singh had said that the expansion is unlikely before May 15. The state’s principal secretary (health and family welfare), Husan Lal, told HT that the state government has ordered three million doses of Covishield, but “SII is yet to respond on the schedule of delivery”.

Karnataka’s commissioner for health and family welfare K.V. Trilok Chandra said the state plans to offer doses to all adults from May 1 but the delivery schedule for its order of 10 million Covishield doses is still awaited. “Hopefully we will get replenished,” he told HT.

A report by The Hindu adds that the governments of Kerala, Jharkhand and Assam also expect a delay in flagging off the expansion.

Kerala, which has already started rationing its doses, will allow all adults to register themselves for a shot from May 1, but the drive “can be conducted only when more stocks are available”. It does not know when these stocks will be available.

On Wednesday, the Telangana government also announced that while adults between the ages of 18 and 45 can register themselves for the vaccine, “they cannot book slots right away”.

JUST IN| Though people in #Telangana who are 18-45 years can register for COVID-19 #vaccination in COWIN website, they cannot book slots right away, says DIH Dr Srinivas. @Shiva_THNews A healthcare worker fills a syringe with a dose of Bharat Biotech’s COVAXIN in New Delhi, January 16, 2021. Photo: REUTERS/Adnan Abidi

Since the liberalised policy was announced, the Centre has been criticised for allowing the vaccine manufacturers to set the price and asking state governments to procure doses directly from the manufacturers. The former policy will allow profiteering, critics have said, while smaller states may face difficulty in procuring doses without the Centre’s help.

Some state governments have also accused the Centre of passing the buck to the states when a shortage in the availability of doses became evident. India’s rolling average of doses administered over the past seven days is 25.3 lakh, a sharp drop from around 35.8 lakh in the first week of April.

Subhash Chandra Garg, the former Union finance secretary, told The Wire‘s Mitali Mukherjee that an unnecessary confusion around pricing was created because of “considerations other than health policy”.

He said the plan was for the Central government to bear the entire cost of vaccines, and “thus also be shown as the benefactor of people”. Garg said trouble started when one manufacturer made a distress call for capital to scale up manufacturing. The Centre did not take this seriously and when the crisis escalated, it panicked. This is how manufacturers were not just given advance prices for supply and opened to the private sector at a higher price, they were also allowed to set a differential price for states, he said.

The Centre will also not import foreign-manufactured vaccines, instead leaving it to state governments and private companies to do so.

Note: This article was updated at 4:30 pm on April 28, 2021, to include the Telangana’s government’s statement.