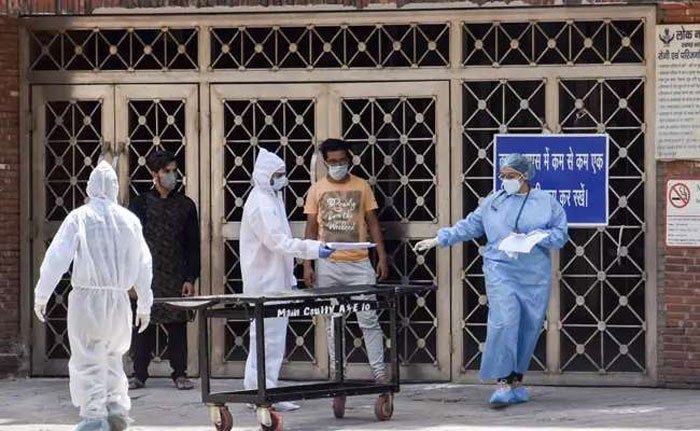 New Delhi: Horror stories of COVID-19 patients being kept in poor conditions at government hospitals in Delhi and then moved into unhygienic and inhospitable quarantine homes are now coming to light. Families are shying away from openly speaking out against mistreatment of COVID patients, fearing that their loved ones lodged in quarantine homes may have to suffer the consequences of public shaming of government facilities.

M, 59, is a heart patient who also suffers from diabetes. She was admitted to Delhi’s Lok Nayak Jai Prakash Hospital on April 15 after she tested positive for COVID-19. Her family was taken by surprise given that she did not have any symptoms virus and had not stepped out of her home since the lockdown was announced on March 24.

“We did not even get a chance to explain her medical history or to understand what the virus means for someone who has undergone an angioplasty and suffers from high blood pressure and diabetes. She was give 15 minutes to pack her bag and was then picked up by an ambulance”. M’s son was allowed to follow the ambulance to see where she was being admitted but after the formalities were done, he was asked to leave and they haven’t heard from hospital authorities since. Her daughter says that hospital authorities did not give any direct numbers on which the medical team treating her could be contacted for an update.

‘Thankfully she has a phone so we are able to speak to her,” she says. “She has told us terrible things. They serve cold food, right out of the fridge, she hasn’t had a hot cup of tea in the last one week, there is no pillow or blanket on the bed and there are cockroaches in the bathroom. The doctor has not visited her since her arrival at the hospital. The nurses have to give them a tablet at night. Sometimes they come at 9pm and sometimes they comes at 1am, switch on all the lights and wake-up everyone. She is a heart patient and she is old. There is no regard for anyone.”

When contacted on April 21, Dr Pasi, medical superintendent of LNJP, said he would try to do whatever he can. “You know the kind of infection this is. There is no need for doctors and nurses to visit the patient unless her condition is deteriorating. Patients can be observed from a distance. The next test will be done after 14 days, there is nothing to be done before that”.

On April 23, M was moved out of LNJP and into Maulana Azad Hospital’s medical centre, without informing the family. “They put her on a bus and told her she was being taken somewhere,” he daughter says. “They are being so secretive about everything. They could have called us and informed us. She had to wait on the bus for two hours before she was driven to the other facility.”

The quarantine centre turned out to be worse than the hospital. M’s family claims that patients are being treated shoddily. “The bedsheet is so dirty, you wouldn’t even use it to swab your house. The toilets haven’t been cleaned in forever. The conditions are so bad that anyone will fall sick.”

M’s family says they are ready to pay for treatment at a good private hospital but are not being allowed to do anything. “We can afford better medical care. We can put her up at a clean hospital where she will be taken care of. What is the point of this forced free treatment when the government is not able to take care of patients. We don’t need such free treatment.”

M’s 19-year-old domestic help who had been admitted to LNJP along with her as she had also tested positive, has now been moved to a quarantine house in Shahadra. She informed the family that she was kept in a room with no food and no drinking water for up to 24 hours. There was no running water in the bathroom either. She was given a thin mattress to sleep on and the room was reportedly swarming with cockroaches. After multiple phone calls, she was provided with a small bottle of water and a packet of namkeen the next morning.

M’s daughter’s father-in-law, who was also admitted for COVID-19, has shared similar stories with the family.  S, 74, who has undergone two bypass surgeries in the past, was placed in an isolation ward at LNJP hospital because he was critically ill. He had to wear an oxygen mask for almost a week. After he had recovered a little and requested access to the toilet, he was told that he could not leave the room.

“There was no toilet in the isolation ward. He was given a pan and asked to use it. His stomach got upset one day, he had loose motions and soiled his clothes. He begged them to let him use the common toilet on the floor. He was finally allowed but was made to wash his clothes himself. Who makes a senior citizen who has undergone two bypass surgeries, wash his own clothes? He was breathless by the time he was done. Who would have been responsible if anything had happened to him”, his family asks.

After 17 days, S reportedly tested negative for COVID and thought that he was going to be discharged. Instead, he was put on a bus, made to wait for three hours, and then driven to Ghaziabad. On reaching there, they were informed that they cannot enter the area because the colony gates were closed. They were brought back to LNJP in the middle of the night. By then S had developed a breathing problem and had to be put on oxygen again. The next day, they were moved to a quarantine house near Mandoli Jail.

During their last conversation, S told his family that he had been given a thin mattress on the floor to sleep on and access to a toilet with an Indian commode. Sitting on the floor to lie down and using the Indian seat are both painful for the 74-year-old because he isn’t able to fold his knees. ‘There has still not been any formal communication with the hospital. We have not been shown any reports. If he actually tested negative for the virus, why hasn’t he been discharged? Nobody knows what is happening. It is so distressing. We are ready to pay for his treatment at a private hospital. It is almost like we are being tortured and harassed because someone from our family is sick”.

It has now been 20 days and the family has not even been contacted once. What is worse, they have no idea who to speak to anymore since S, M and the domestic help have all been moved out of the hospital. Three people from the same household, who tested positive, are being kept at three different locations in Mandoli, Shahdara and Central Delhi.

After several complaints, the administration of LNJP hospital issued an order on April 23, asking doctors to take at least 3 rounds of the coronavirus wards and take feedback on patients from food and cleanliness.

When contacted, a senior official looking after COVID arrangements in Delhi said that the government doesn’t believe that the condition in hospitals is inhospitable or that the treatment is poor. Responding to M’s case, he promised to check with the health department and get back. The story will be updated as and when the government does find a suitable explanation.

Meanwhile M’s family is still waiting for some sort of official communication from either the health department of the Delhi government or the LNJP Hospital.

Seemi Pasha is a Delhi-based journalist