COVID-19: 34 Returning From Haridwar Test Positive in Ahmedabad, 13 in Surat

Gujarat Chief Minister Vijay Rupani has mandated an RT-PCR test for people returning to Gujarat from the Kumbh Mela in Haridwar. 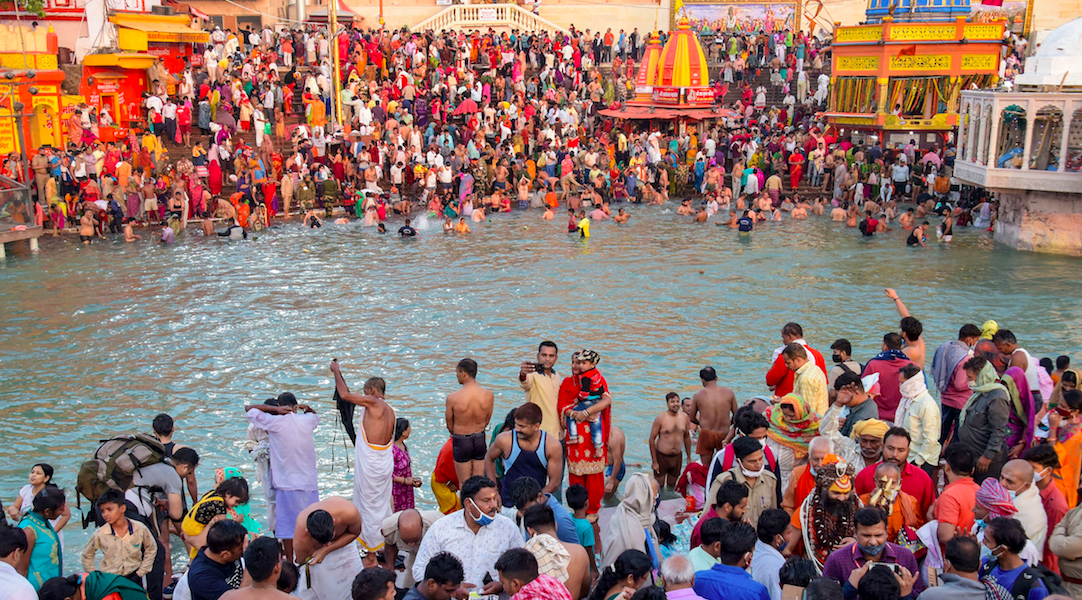 New Delhi: On the same day when Gujarat Chief Minister Vijay Rupani announced that people returning to Gujarat from the Kumbh Mela in Haridwar will have to undergo an RT-PCR test before they are allowed to enter their respective cities and villages, Times of India reported that at least 11% o the 313 Kumbh returnees tested at Ahmedabad’s Sabarmati Station had tested COVID-19 positive.

“Collectors of all districts in Gujarat have been directed to keep a watch on the Kumbh Mela returnees and enforce a nakabandi’ (security checking) to prevent their entry in their hometowns without undergoing an RT-PCR test,” Rupani told reporters in Jamnagar.

Following state government directive, a special rapid antigen testing facility was set up at the city’s Sabarmati station by the Western Railway and Ahmedabad Municipal Corporation, TOI has reported.

Thirty four out of the 313 passengers returning to Gujarat from Uttarakhand were found to be COVID-19 positive through the rapid antigen test. All 34 have been quarantined at the Samras hostel facility being run by the municipal body.

On Sunday, April 18, as well, COVID-19 testing will be done at the station.

Only one train connects Ahmedabad to Haridwar directly, the Yoga Express.

The rapid antigen test conducted at the station is not the same as an RT-PCR test, which the government has mandated. The latter is regarded to be more conclusive but takes more time to arrive at a result.

“There would be another 10 to 15% passengers who would be having the symptoms but may not have been tested positive in rapid antigen,” a municipal body official told TOI. Passengers will only be allowed to enter Ahmedabad after their RT-PCR tests are done, he added.

The Gujarati newspaper Sandesh has, meanwhile, reported that 13 people who returned to Surat from the Kumbh Mela, have tested positive for COVID-19. More than 300 people returning from Haridwar were tested in the city, the paper noted.

The ongoing Kumbh, which has seen lakhs of people from various parts of the country congregate on the river bank at Haridwar – making COVID-19 protocols impossible to adhere to – has led to large numbers of attendees testing positive and criticism of the government for allowing such a gathering to take place amidst a surge.

Several days after the Uttarakhand chief minister said that the crowds at Kumbh were justified and that “Maa Ganga’s blessings” would protect people, Prime Minister Narendra Modi on Saturday, April 17, made a U-turn and asked for attendance to be “symbolic.”

Gujarat’s struggle with the rise in cases has proven particularly uphill, amidst allegations that the Rupani government is attempting to downplay the extent of the crisis. On Friday, it added the highest number of 8,920 new coronavirus positive cases in a day, taking the tally to 3,84,688, while a record 94 patients died due to the infection which raised the toll to 5,170, as per the state health department.