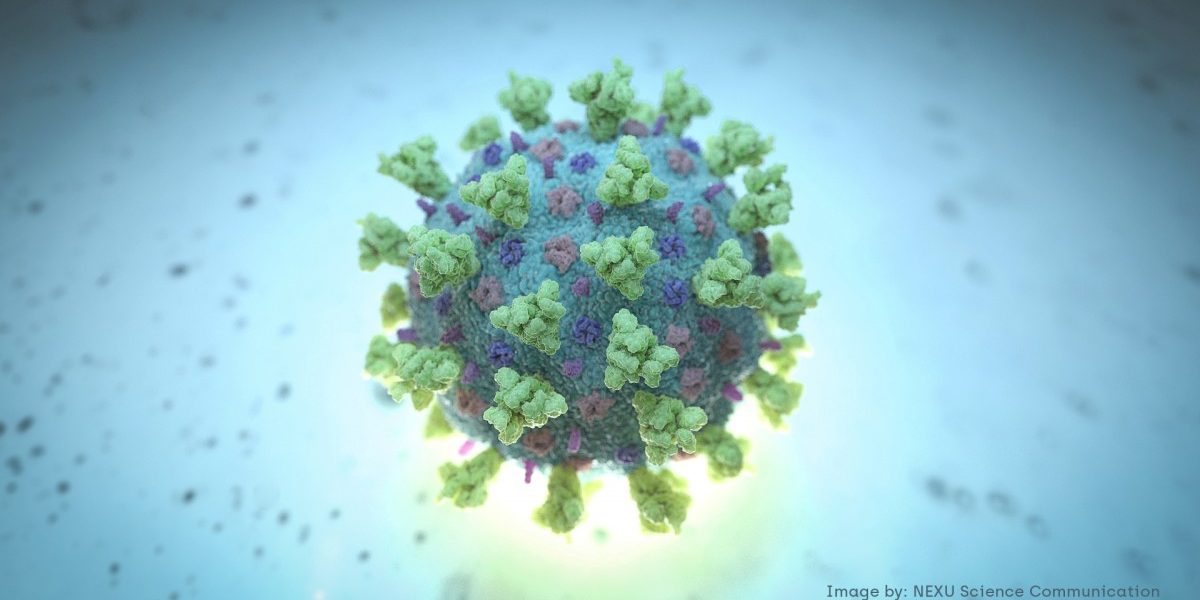 A computer image created by Nexu Science Communication together with Trinity College in Dublin, shows a model structurally representative of a betacoronavirus which is the type of virus linked to COVID-19, better known as the coronavirus linked to the Wuhan outbreak, shared with Reuters on February 18, 2020. Photo: NEXU Science Communication/via Reuters

New Delhi: India registered its biggest single day spike of COVID-19 cases for the fourth consecutive day on Monday with 6,977 new infections, reported in the last 24 hours, taking the country’s tally to 1,38,845, while the death toll rose to 4,021, according to the Union health ministry.

With this spike, India is now in the top ten worst affected countries by the pandemic, overtaking Iran which has seen 135,701 cases. The list of ten worst-affected countries, ranked in terms of number of cases, now is: United States, Brazil, Russia, United Kingdom, Spain, Italy, France, Germany, Turkey and India.

A total 154 deaths were reported in India in the last 24 hours till Monday 8 am.

At the current rate of increase, India is likely to overtake Turkey too, in another four days, if the current pace remains. However, the case fatality rate in India, at 2.9%, is more half that of Iran’s, and of the global average of 6.3%.

The number of active COVID-19 cases climbed to 77,103 while 57,720 people have recovered and one patient has migrated, the ministry said. “Thus, around 41.57% patients have recovered so far,” a senior health ministry official said. The total confirmed cases includes foreigners.

Though official spokespersons have been highlighting the Indian recovery rate, they do not mention that the global recovery rate is also the same or slightly better. On May 25, 41.84% of all those infected with the novel coronavirus around the world had recovered.

Of the 154 deaths reported since Sunday morning, 58 were from Maharashtra, 30 from Delhi, 29 from Gujarat, nine in Madhya Pradesh, eight from Tamil Nadu, six from Uttar Pradesh, four from Telangana, three each from Rajasthan and West Bengal, two from Bihar and one each from Punjab and Uttarakhand.

The death toll reached 53 in Telangana, 42 in Karnataka and 40 in Punjab.

Jammu and Kashmir has reported 21 fatalities due to the disease, Haryana has 16 deaths while Bihar has registered 13 and Odisha has seven deaths.

Kerala, Jharkhand and Assam have reported four deaths each so far.

Chandigarh, Uttarakhand and Himachal Pradesh each have recorded three COVID-19 fatalities each while Meghalaya has reported one fatality so far, according to the ministry data.

According to the ministry’s website, more than 70% of the deaths are “due to co-morbidities”.

First indications of the effectiveness of a potential vaccine against coronavirus may be available in the autumn, the head of the GAVI vaccine alliance told a Swiss newspaper, forecasting a long road from there to broad availability.

“Unfortunately, we really do not know which vaccine will work and whether there will be one at all. If we’re lucky, we’ll receive indications in autumn as to (a potential vaccine’s) effectiveness,” GAVI head Seth Berkley told NZZ am Sonntag in an interview published on Sunday.

“But there will still be a long way to go from there until an approved active substance becomes available in large quantities for the global population.”

Also read: Could the Impact of COVID-19 Herald Promising Changes in Iran?

Calling for globally coordinated efforts both to produce and share an eventual vaccine, Berkley said international agreement was needed to build up manufacturing capacity to rapidly produce a vaccine once one is found.

“(Countries) should work together in order to share in each other’s vaccines in case one’s own are not good,” he said, adding it was possible some vaccines would work better for younger people and others for older age groups.

He urged the World Health Organisation to issue clear guidelines on a vaccine’s use and distribution to prevent a vaccine first being made available to the rich at the expense of the people most in need.

Should an effective vaccine become available in an initially limited supply, it should first be used to immunise health personnel, he said.

Domestic flights will resume across India on Monday after a day of “hard negotiations”, the civil aviation minister said on Sunday, after some states sought to limit the number of flights.

Airlines are preparing to resume about a third of their domestic flight operations from Monday, even without clarity over what quarantine rules may apply to passengers.

Maharashtra, Tamil Nadu and West Bengal had said they were not prepared to open for flights as coronavirus cases rose, state government officials said.

“It has been a long day of hard negotiations with various state government to recommence civil aviation operations in the country…..Domestic flights will recommence across the country from tomorrow,” he said.

West Bengal urged the Central government to postpone the resumption of passenger flights to Kolkata as it focuses on rescue work after Cyclone Amphan hit the city.

Workers at two of India‘s biggest carmakers have tested positive for the novel coronavirus days after restarting operations, exposing the risks companies and the government face in kickstarting the economy.

Maruti Suzuki India Ltd, which sells one in every two cars in the country, said late on Saturday one employee at its plant in the northern city of Manesar had tested positive and there was the possibility of a second case.

The cases show the risks and challenges Prime Minister Narendra Modi’s government faces in restarting automobile production in an effort to revive the economy after a near two-month lockdown to fight the spread of the coronavirus.

Maruti, majority owned by Japan’s Suzuki Motor Corp, said there was no impact on business operations. The carmaker restarted work at its Manesar plant earlier in May.

Watch: Korona: An Animated Reminder of the Real Indian Lockdown

Hyundai, which restarted operations at its plant on the outskirts of the southern city of Chennai on May 8, said the three employees started showing mild symptoms of coughs and colds in the first week.

“All the necessary measures are being taken for contact tracing, self-isolation and complete sanitation,” Hyundai’s India spokesman said in a statement.

Test results of sixteen more workers who possibly came into contact with the infected employees are expected over the next two days, a senior government official told Reuters.

“The state’s policy is to not let the industry stall,” said P. Ponniah, the top bureaucrat in the Kancheepuram district where Hyundai’s plant is located.

He said parts of the plant visited by the employees would be sanitised, a process likely to take 3-4 days during which time staff would be barred from those areas.

Hyundai’s employees union has written to management and the Tamil Nadu state government, urging the company to immediately test all workers at its own expense, president E. Muthukumar told Reuters.