COVID-19: Has Delhi Passed its Peak or Is its Test Strategy Confusing the Picture?

It is somewhat disappointing that Delhi's epidemic is not slowing more clearly and unambiguously. 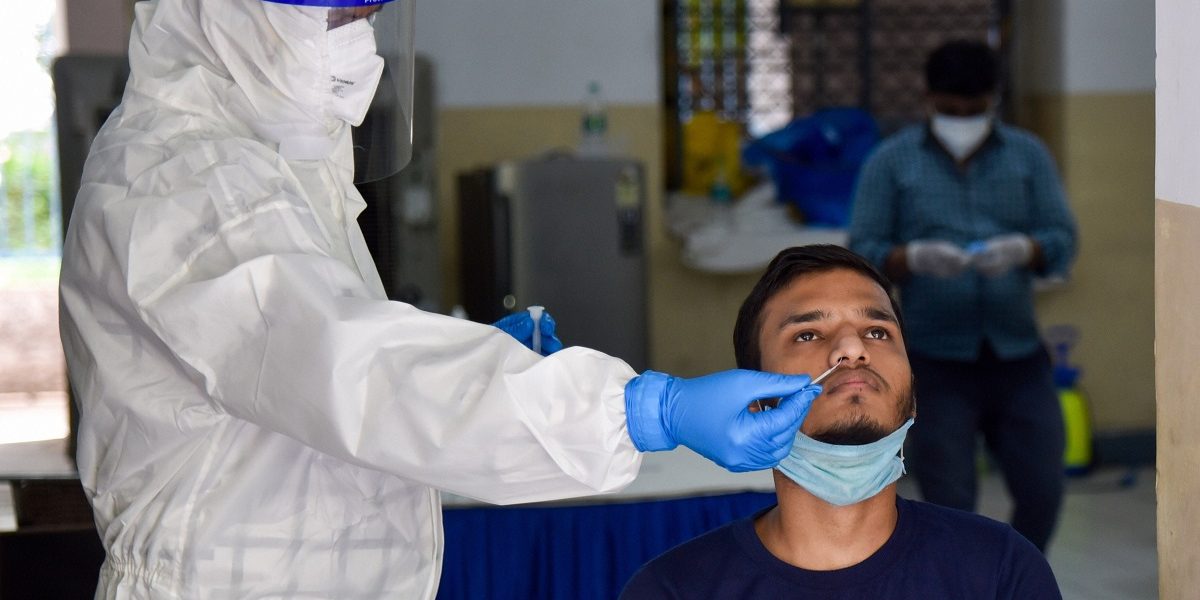 To see the improvement more starkly, we can take daily cases and divide by daily tests to get an approximation of ‘test positivity’, which is the total proportion of tests that come back positive. We find a dramatic decline from about 30% test positivity in mid-June to about 7% now. The steady decline during July, when total tests were roughly constant, appears to be a clear indicator of decreasing levels of infection in the capital. 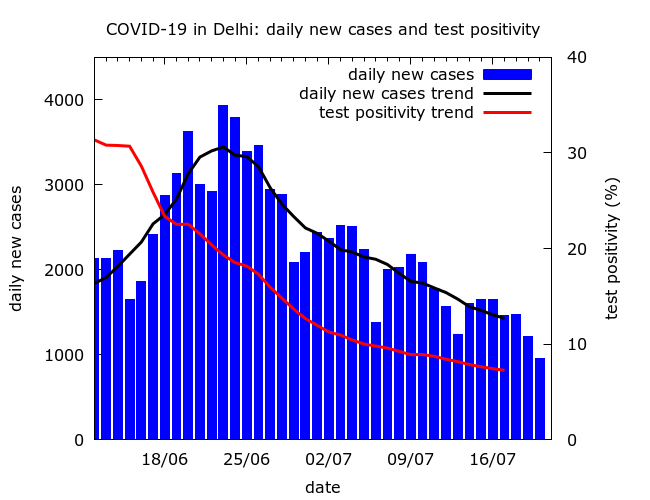 Yet experts have argued that this improvement is a mirage caused by a change in Delhi’s testing strategy. Could this be true? To decide, we need to examine the story more carefully.

On June 18, Delhi began to use rapid antigen tests alongside RT-PCR, CBNAAT and TrueNat tests to identify COVID-19 cases. Daily tests more than doubled from one week to the next. Cases also went up, as one would expect, although by a more modest 55% or so. The jump in cases at least partly reflected better “case detection” – i.e. a greater proportion of infections were being detected thanks to the increased testing.

However, after peaking on June 23, cases began to decline quite steadily. Meanwhile, testing stayed fairly constant.

Constant levels of testing and declining cases would generally be a clear sign that an epidemic has passed its peak. So what’s the catch? 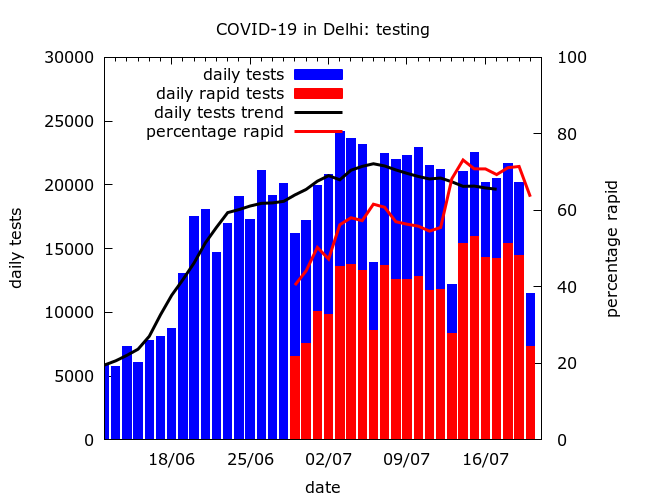 This matters because the rapid tests are not very sensitive: they miss a lot of infections. According to the Indian Council of Medical Research, the sensitivity of the rapid tests was found, in two separate studies, to be 50.6% and 84%. A figure of 50% sensitivity would mean that for each true positive revealed by the test, another positive result is incorrectly returned as negative by the test – a so-called false negative.

In fact, the sensitivity of the rapid tests may be even lower than 50%. Out of 281,555 rapid antigen tests carried out in Delhi between June 19 and July 15, 19,480 (about 7%) returned positive. A small fraction (1,365) of symptomatic individuals who tested negative were retested with RT-PCR tests, and of these almost 18% were found to be COVID-19 positive. This would suggest that the test had a sensitivity of only about 28%: for each positive result, more than two more were being missed.

Also read: The Similarities and Differences in COVID-19 Data From Delhi and Tamil Nadu

Note that those retested in Delhi were symptomatic patients, and this could have skewed the results giving more missed cases, and suggesting a lower sensitivity than the reality. But a similar story emerged in Ghaziabad when negative rapid antigen results of both symptomatic and asymptomatic patients were followed up with RT-PCR testing. In that case, the data indicated that the rapid tests had sensitivity of only about 15%: more than five in six infections were being missed by the rapid tests.

Suffice it to say that the sensitivity of the rapid tests is something of an unknown, with estimates ranging from 15% to 84%! We can still examine some scenarios.

As mentioned earlier, the raw value of test positivity tells a simple, optimistic story. Prior to the ramp up in testing, test positivity was regularly crossing 30%, whereas it is now pegged below 10%. But if we factor in the gradual switch from RT-PCR to rapid antigen tests, and assume only 28% sensitivity of these tests, we can add in the cases that “should” have been detected but were missed. We assume these missed cases track the rapid test numbers throughout the period where these numbers are available (June 29 to the present). We can then use the added cases to calculate a corrected test positivity. This corrected test positivity has hovered around 20%, with no discernible decrease since June 29.

If we are a little more optimistic and assume sensitivity of 50% for the rapid tests, then the corrected test positivity sees a modest decrease from about 15% at the start of July to about 12% currently. 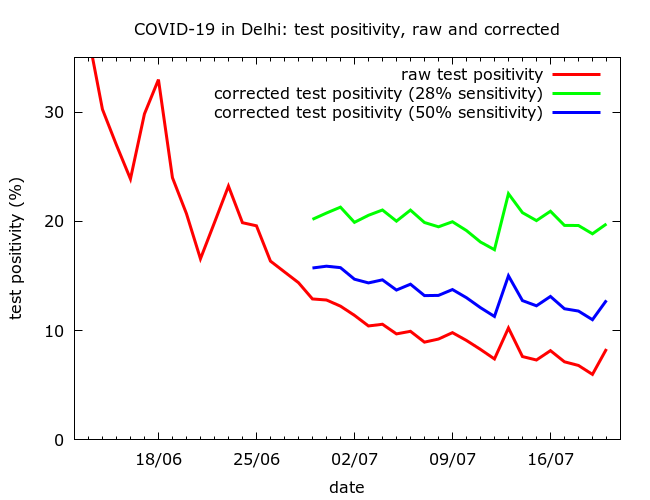 What can we conclude?

First, we should note that even correcting for the reduced sensitivity of the rapid antigen tests, test positivity has declined since mid-June. Delhi’s pronounced peak in daily cases was somewhat artificial, being a consequence of a sudden increase in testing and the switch to a less sensitive test. Nevertheless, the improving numbers in the latter half of June probably reflected a drop in underlying infection levels.

If we focus on July, on the other hand, the picture is less clear. To know if there has been genuine improvement, we need to know the sensitivity of the rapid tests. With 30-50% sensitivity, corrected test positivity has either been stable or declined slightly this month. In this case, the bulk of the apparent improvement during July is indeed a mirage that can be attributed to the gradual switch from RT-PCR testing to rapid antigen testing. Delhi is not out of the woods yet.

Also read: The Problem With Spinning Simple Stories Based on India’s COVID-19 Numbers

An important footnote to this story is that the Delhi government recently reported approximately 23% prevalence of immunoglobulin G antibodies against COVID-19 in Delhi by early July. Since this figure reflects COVID-19 prevalence in mid-June, and the majority of Delhi’s cases have been reported since then, we would expect a rather higher COVID-19 prevalence today, perhaps even 40%. If we follow the path that COVID-19 has taken in cities around the world, we would certainly hope for stabilisation at such high seroprevalence values – and it is somewhat disappointing that Delhi’s epidemic is not slowing more clearly and unambiguously.