COVID-19: What Do We Want To Achieve With Booster Doses? In a televised address to the nation on Christmas night, Prime Minister Narendra Modi announced the government’s decision to roll out booster doses for COVID-19 vaccines for frontline workers and the elderly with comorbidities. The prime minister, and the health ministry behind him, were presumably responding to growing demands to further protect people at greater risk of getting COVID-19, thanks in part to the highly transmissible delta and omicron variants.

This said, there still remains a sizable demand for the government to cover the entire eligible adult population with booster doses. But given supply constraints, this demand imposes a choice: boosters for all plus high demand versus boosters for the most vulnerable plus manageable demand. This is just one reason why we must consider factors before offering to roll out booster doses.

There is also a great deal of inequity in the availability and use of COVID-19 vaccines in different countries. While more than 100 countries already provide third or booster doses to some or all segments of the population, many others are still struggling to vaccinate their population even with the primary course (i.e. first two doses). According to one assessment, primary vaccination coverage is lower than 10% in 45 countries and lower than 40% in 105.

The low current vaccination rates in these places are largely the product of limited supply in countries, although this is expected to be ameliorated in 2022.

These reasons, taken together, are why the WHO hasn’t yet recommended booster doses for everyone. It believes that booster programmes at present will only limit vaccine supply in poorer countries and thus prolong the ongoing pandemic.

A recent news report did suggest that even three doses of a Chinese inactivated vaccine called CoronaVac didn’t confer sufficient protection against the omicron variant, which deepens the need to understand how other vaccines of the same platform will respond.

There is little doubt that booster doses are critical to improve people’s humoral immune response against the omicron variant. According to some modelling studies, booster doses are expected to reduce infections and symptomatic illness in the population, at least over the short term, and to boost the immune response in those with suboptimal or waning protection against the disease.

However, there is another issue: how many will we need, and how frequently will we need additional ones? There is data from Israel to suggest that booster doses’ protection wane after a few weeks of administration against the omicron variant. Could this be an early signal that the rate of decline in booster effectiveness in most age groups will resemble that after the second primary-course dose? The Israeli health ministry has already decided to introduce a fourth dose for people aged 60 years and above. 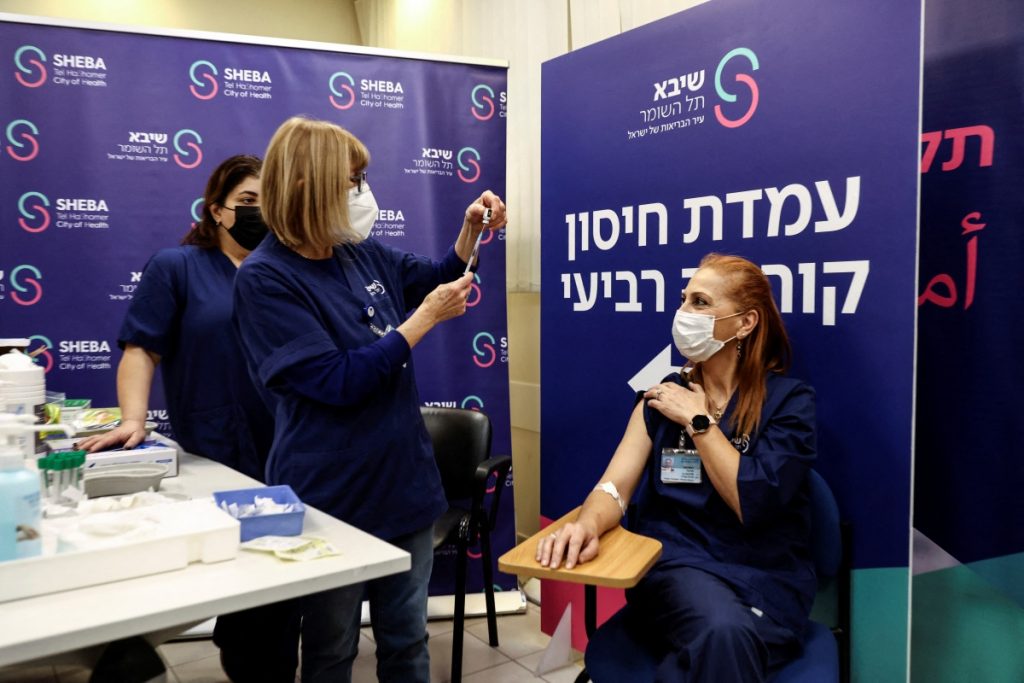 A medical worker receives a fourth dose of a COVID-19 vaccine as part of a trial in Israel at Sheba Medical Center in Ramat Gan, Israel December 27, 2021. Photo: Reuters/Ronen Zvulun

Omicron and the Indian context

According to the data available, in the UK, two doses of the AstraZeneca vaccine couldn’t protect against symptomatic disease by the omicron variant 15 weeks after the second dose (5.9% effective). But those who’d received a primary course of the AstraZeneca vaccine followed by a booster dose of the Pfizer vaccine enjoyed, on average, 60-70% effectiveness against symptomatic disease – but which dropped to around 35% in 10 weeks.

There is no data yet on the effectiveness of an AstraZeneca shot as a booster dose, against the omicron variant and after a primary course of the same shot, but it’s likely to be lower than the boost conferred by the Pfizer vaccine.

Note also that this assessment is limited to symptomatic infections; there is no data yet for severe disease. Most earlier reports point to the persistence of a meaningful amount of protection against severe COVID-19 and death.

There have also been no reports on the performance of Covaxin against the omicron variant. As mentioned earlier, a lab study found that two doses plus a booster of the CoronaVac inactivated-virus vaccine didn’t induce sufficient levels of neutralising antibodies against the omicron variant. (These antibodies are critical to prevent infection and symptomatic disease.) The result suggests that people who have received CoronaVac should receive a different vaccine for their booster.

And since both CoronaVac and Covaxin vaccines use the same platform, it wouldn’t be inappropriate to extrapolate the results of CoronaVac to Covaxin.

So which vaccine should we use for booster doses? The data thus far indicates that heterologous regimes – i.e. mixed combinations – are more rewarding than homologous regimes. Heterologous schedules also allow for more flexible vaccination programmes and could possibly increase the breadth of immune response by stimulating the immune system differently.

But right now, in India, we don’t have many options.We know that mRNA (Pfizer, Moderna) and protein subunit (Covovax) vaccines provide a bigger ‘jump’ in neutralising antibody titres. We also know that inactivated-virus vaccines elicit only a modest amount of neutralising antibodies. So for those who have received Covishield for the primary series, Covaxin may not significantly boost antibodies titers, nor T-cell responses, and may be less advantageous from an immunological point of view.

On the other hand, Covishield may boost Covaxin recipients to a significant extent. What ought to be our objective?

We can address a more fundamental question now: what do we want to achieve with boosters?

The answer depends on our foremost objective. If this is to prevent severe disease, hospitalisation and death, then two doses of the current generation of COVID-19 may be able to do the job.

If instead our objective is to prevent infection and symptomatic disease, then we will need to administer boosters, and frequently. With the looming threat of a third wave propelled by the omicron variant, and evidence of its significant immune-evasion ability, the current vaccines may not be able to prevent (asymptomatic) infection and transmission. To accomplish this, we need mucosal or variant-specific vaccines.

That is, if our objective is to prevent severe disease, boosters may not offer much since the absolute risk reduction between the two- and three-dose groups is negligible, going by the data from Israel. In this country, the fraction of individuals who went on to have severe disease remained unchanged even after the booster dose. There was also no significant difference in the rates of progression of symptomatic infections to hospitalisation (6.9% v. 5.6%) and deaths (1.31% v. 1.36%) between the two- and three-dose recipients.

So the boosters may reduce the total number of infections – but they may not provide additional protection against severe disease among those who have developed a symptomatic infection. This scenario has stayed the same after the advent of the omicron variant as well.

So from the societal and the public-health points of view, boosters may not be a cost-effective strategy.

Almost all laboratory studies have indicated lower neutralisation of the omicron variant by the sera of individuals vaccinated with a variety of COVID vaccines. And whereas higher neutralising-antibody titers are needed to protect against infection, lower titres can protect against severe disease and death, aided by T-cells, particularly CD8 cells.

Indeed, T-cell immunity is key to protecting against severe disease and death. We know there are hundreds of T-cell epitopes. (The epitope is the part of the antigen to which the antibody – such as a T-cell – attaches itself.) Researchers have already identified around 280 CD4 and 450 CD8 epitopes for the SARS-CoV-2 virus, and only a few epitopes have been lost due to mutations.

With the omicron variant, we know that more than 80% of T-cell epitopes have been preserved. So it has been almost impossible (at least thus far) for any new variant to be able to evade T-cell protection entirely.

Further, unlike with neutralising antibodies, every individual has different T-cell epitopes (depending on the distribution of their human leukocyte antigens). We also know that the amount of protection conferred by neutralising antibodies declines as the virus ‘diverges’ from the original strain increases – but T-cells and memory B-cells responses have stayed constant (see figure below). To prevent infection, we need a specific concentration of neutralising antibodies, not T-cells.

According to general immunology teaching, immunoglobulin-G antibodies have a half-life of around one month. After this, if the antibodies don’t encounter any more antigens, they almost disappear from the blood.

The memory B-cells, provided they have had adequate time to act, and T-cells are the ones that protect an individual against future attacks by the same invader.

Further, T-cells – if they have been elicited by an infection – can recognise viral fragments that have nothing to do with the regions a viable virus has displayed. This is because T-cells have the ability to identify fragments even after a virus has been ‘chewed up’. This is in contrast to neutralising antibodies, which generally want to ‘attack’ a specific part of the virus that obstructs a particular function (like binding to cells).

The memory B-cells help protect the neutralising antibodies. But they take some time to get into action in the event of a viral invasion (and if the virus has previously attempted to invade, either naturally or through a vaccine). If a virus has a longer incubation period, they succeed in invoking neutralising antibodies to clear the infection. But in the case of SARS-CoV-2, and more so with variants like the delta and the omicron, which have very short incubation periods, B-cells fail to offer much protection.

The two doses of most COVID-19 vaccines elicit T-cell responses sufficient to protect against severe disease.

When the results of phase 3 trials of mRNA vaccines were announced in late 2020, there was jubilation in the medical fraternity over the unexpectedly high efficacy numbers, in the range of 94-95%. Many believed that we had found a ‘magic bullet’ that could rapidly halt the ongoing COVID-19 pandemic. However, they failed to realise that these numbers were point estimates, and of the protection the vaccines offered against symptomatic COVID-19 with a limited follow-up (1-2 months) of the trial participants.

So as things stand, two doses of the existing vaccines, especially the viral-vector and mRNA vaccines, should suffice to ward off the SARS-CoV-2 threat, including that posed by its newer avatars. There is no limit to the number of boosters that will be required to prevent infections, since protection against infection does wane after a few weeks. There have even been anecdotal reports of individuals getting infected even after having recovered from COVID-19 before and being fully vaccinated.

According to a new study, a large fraction of triple-vaccinated healthcare workers got infected by the omicron variant in the Faroe Islands (in the Norwegian Sea). All of them had received their last doses only a few weeks ago, which means the protection conferred by the third doses had waned pretty quickly against the omicron variant.

Studies from South Africa and the UK have also indicated considerably lower risk, specifically 45-90% reduced risk, of being hospitalised with the omicron variant than with the other variants of concern. In a large outbreak caused by the omicron variant in Norway, the most common symptoms among 70% of those infected were cough, followed by runny/stuffy nose, fatigue/lethargy, sore throat and headache. Fever was present in only 50%. None of them had to be hospitalised.

Our aim should be to prevent severe disease, hospitalisation and death. Our aim should not be to prevent mild respiratory disease with scratchy throats. To achieve the former, two doses of the current crop of COVID-19 vaccines should suffice. We must stop chasing infections, symptoms or the dream of a “zero-COVID” state – all of which are unattainable.

Many countries need to determine the best use of their limited vaccine supply soon. In most settings, they can gain the most by focusing on vaccinating the unvaccinated. That is, our most important target remains to ensure the eligible population in every country has completed the primary series of vaccination. This will ultimately lead to a greater reduction in severe disease and death.