Why Shutting Down Chinese ‘Wet Markets’ Could Be a Terrible Mistake

While consumers have embraced supermarkets and pre-packaged foods, China’s economic development has not led to a demise in Chinese forms of consumption. 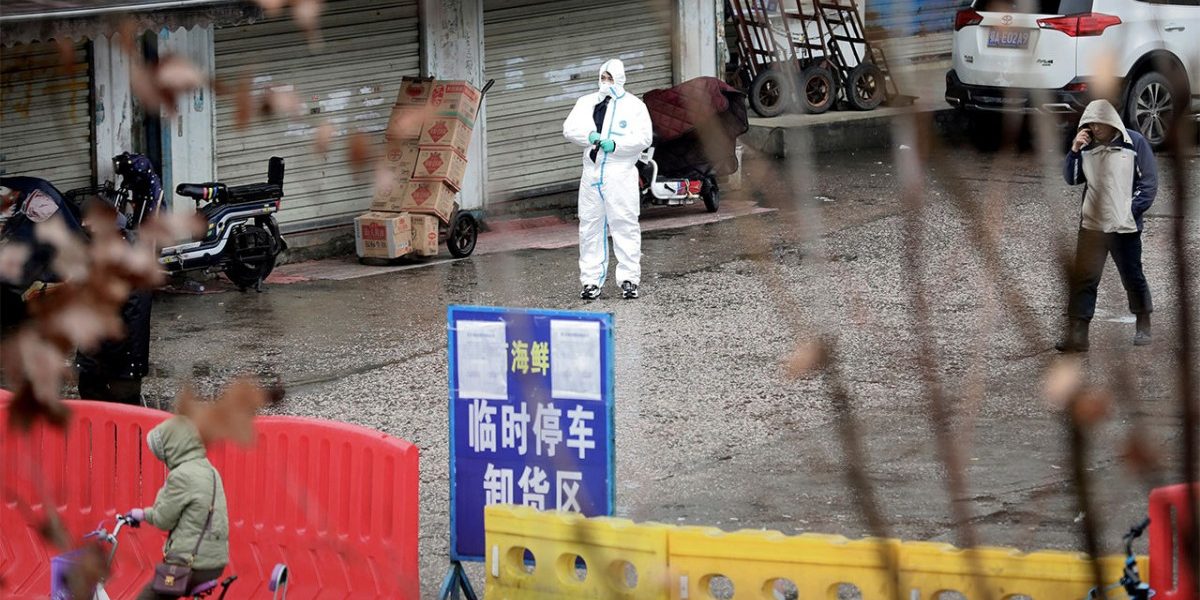 In late 2019, a new coronavirus – now formally known as Covid-19 – emerged in the city of Wuhan, China. Despite a quarantine established by Chinese authorities, it subsequently spread to South Korea and Japan, and then Iran and Italy. So far, at least 80,000 people have been infected, with nearly 2,700 deaths.

As anthropologists who have worked for a long time on diseases that spread from animals to humans (zoonotic diseases) in China, our research can provide insights into the unfolding crisis. It is highly probable that this new form of coronavirus, which causes pneumonia – in some cases lethal – emerged through a zoonotic spillover, a “jump” of the virus from non-human animals to humans, in early December 2019. Chinese scientists have traced the potential source of the virus to Wuhan’s Huanan Seafood Wholesale Market, which 27 of the initial cluster of 41 admitted hospital patients (but not the first recorded patient) had visited.

The market sold much more than seafood, including a range of wild animals. And scientists suspect that the virus “jumped” to humans from one of the wild animal species sold at the market. Contrary to the earlier hypothesis that the virus originated in snakes, current genetic evidence suggests an emergence in bats, which are less frequently sold in Chinese markets, but are widely believed to constitute the animal reservoir of many infectious diseases transmissible to humans. Wuhan closed and disinfected the market on January 1, and China issued a temporary ban on all trade in wild animal products on January 22.

In the wake of the coronavirus epidemic, global media accounts of China’s live animal markets have themselves gone viral. A New York Times article, for example, consciously described China’s “omnivorous” markets in a way that would be aesthetically unacceptable to its western audience (whole plucked chickens – with heads and beaks attached), as well as an assortment of wild animals, selected to shock the reader:

But the focus on exotic food consumption in China often relies on Orientalisation, and is in some cases tinged with anti-Chinese sentiment.

The epidemiological need to be specific about what species the Huanan Seafood Wholesale Market actually contained, and in what frequency, is undermined by media reports urging for a permanent ban or abolition of these “wet markets”. Such reports often lean heavily on a montage of images from different markets across China with little information on the where and when these were taken, and no acknowledgement of the significant variations in cuisine across different regions of the country.

These images communicate a sense of disgust toward the eating habits of the Chinese and at the same time reflect a fear of the interconnectedness of two types of “emergence” in China: viral emergence and economic emergence.

Anthropologists have discussed in some detail how the Chinese model of development (the economic emergence of China in the 21st century) has been perceived in the West as a threat, both in political and cultural terms: China’s economic development because of its rapid nature and the competition this might pose to the US or EU economies; and culturally, because reforms seem incompatible with western expectations of modernisation. In short, rather than China adapting to capitalism, capitalism (in China) is adapting to China.

China’s food consumption is iconic in this process. While Chinese consumers have embraced supermarkets and pre-packaged foods, China’s economic development has not led to a demise in Chinese forms of consumption, such as the desire for “warm meat”, and has not ushered in European and American cultural norms of what is eatable and what is not.

In western media, “wet markets” are portrayed as emblems of Chinese otherness: chaotic versions of oriental bazaars, lawless areas where animals that should not be eaten are sold as food, and where what should not be mingled comes together (seafood and poultry, serpents and cattle). This fuels Sinophobia and anxieties of what anthropologists have long identified as “matter out of place”: a symbolic system of pollution through which proscriptions and prescriptions of what foods or foodstuffs may be combined is held up.

This image is highly flawed, not only because it relies on western sensitivities of what is eatable and what is not, and which portrays a modern form of Chinese food trade and consumption as “traditional”, but more practically, because it misrepresents the material and economic reality of these markets.

Diversity of the markets

In reality, most seafood, live animal and wholesale markets in China contain far less exotic fare. An enormous variety of different kinds of market are confusingly lumped within the term “wet market”, a term that originated in Hong Kong and Singapore English to distinguish markets selling fresh meat and produce from “dry” markets selling packaged and durable goods such as textiles.

Today, several kinds of “wet markets” can be distinguished, with differences that are often crucial for accurately assessing the risks they pose for the emergence of viruses: scale (wholesale or retail), produce (live animals, only slaughtered meat and fresh vegetables, only live seafood; animals (domestic only or wild). Where markets do contain what many western media portray as “wild animals”, the majority of these are actually bred and farmed in captivity, such as mallard ducks, frogs, or snakes. Only a smaller proportion of animals are actually poached from the wild for sale. The struggle of Chinese farmers

What is perhaps most omitted in the discussion of Chinese wet markets is the perspective of farmers, producers, and vendors. Although media reports often marvel at the consumption of wild animals, little is said about why farmers produce them. As Lyle Fearnley learned during fieldwork research with wild swan goose (dayan) farmers in Jiangxi Province, two factors brought most farmers into the breeding of wild geese during the late 1990s: an opportunity to meet consumer demand without illegal poaching from the wild, and as a path toward higher-value production, at a time when rural smallholder farmers faced increasing economic pressure from large-scale industrial food producers.

During China’s post-Mao market reforms which began in 1978, collective farmland was redistributed to individual households, leading to an explosion in smallholder farmers, known as “specialised” (zhuanyehu) because they focused on particular cash crops or livestock, including chickens, ducks or pigs. But in the 1990s, China embarked on a “second leap” to expand the scale of agricultural production. Heavily capitalised “dragonhead enterprises”(longtou qiye) – industrial food production conglomerates – built integrated supply chains, often centred on slaughterhouses and processing facilities, and contracted livestock out to household-scale farmers.

After the livestock revolution

An enormous consolidation followed, as independent smallholders were progressively driven out of livestock farming, especially in sectors such as pork or poultry, because prices dropped too low and the cost of inputs went up. Livestock diseases, such as Newcastle disease and Porcine reproductive and respiratory syndrome, also played a role in driving smallholders out of these sectors. Unable to survive as independent smallholders, many farmers faced a drastic choice: take up farming under contract to an industrial food conglomerate, or get out of farming pork or poultry altogether.

Some farmers discovered a third way, opting to raise local breeds and wild animals that could be sold for higher returns in niche markets. Many of these species were less afflicted with diseases than mainstream livestock, often simply an effect of the smaller number being farmed. Although the higher price of wild animals compared to domesticated has led to the belief that its consumption “is a dietary choice and not driven by low income”, for farmers the story is different: breeding wild animals can be a path toward a steady income when it remains a struggle to live off the land in rural China.

The variety of markets grouped under the term “wet markets”, much like the farming of wild animals, have provided important livelihoods to independent smallholder farmers. These markets often also have informal supply chains that enable smallholders to transport animals to market without the involvement of large-scale food processing firms that own slaughterhouses and control contracts with supermarkets. But although informal, it’s not to say such markets are unregulated. Research by Christos Lynteris recorded regular inspections of “wet markets” markets by the Chinese Center for Disease Control and Prevention (CDC) and by municipal sanitary authorities that begin after the SARS epidemic in 2003.

“Wet markets” form an integral part of the Chinese market and of Chinese social life. And based on the latest data suggesting a significant number of early cases of coronavirus without links to the Huanan Seafood Market, several infectious disease experts have raised doubts about whether the market was the source of the novel coronavirus at all. Whatever the case, while shutting them down temporarily and curbing wild-animal trade has advantages when it comes to preventing disease, a permanent shut down or abolition of “wet markets” would have an immense and unpredictable impact on everyday life and well-being in China.

A permanent shutdown of “wet markets” would affect patterns of food consumption in ways that are unknowable but potentially harmful to public health. It would deprive Chinese consumers of a food sector that accounts for 30-59% of their food supplies. Due to the large number of farmers, traders and consumers involved, the abolition of “wet markets” is also likely to lead to an explosion of an uncontrollable black market, as it did when such a ban was attempted in 2003, in response to SARS, as well as in 2013-14, in response to avian influenza H7N9.

This would involve enormously greater risk to public and global health than the legal and regulated live animal markets in China today. And live poultry and animal markets have long served as a crucial “early warning” site for viral surveillance, including in the United States.

What “wet markets” in China require is more scientific and evidence-based regulation, rather than being abolished and driven underground.