In India, where millions of children are growing up in less than perfect environments for their development, their wellbeing could not be more precarious. 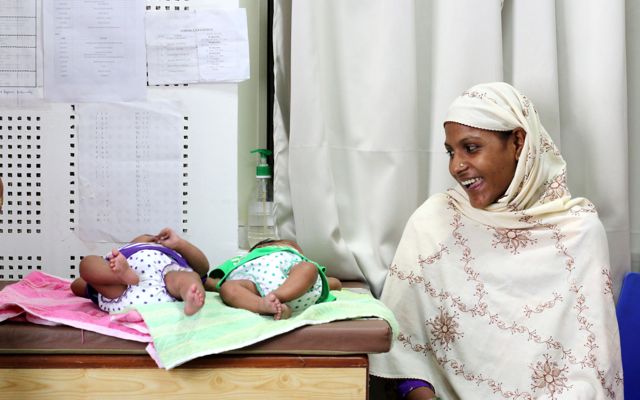 How caregivers interact with their children can actually alter those children’s brains. Credit: Jo Chopra

According to the World Health Organisation, there are 200 million children with disabilities worldwide. Approximately 50 million of them live in India, and a vast number of these children have acquired their disabilities. They weren’t born with them, they didn’t have to have them.

Malnutrition, poverty and lack of responsive caregiving, especially in the crucial first three years of a child’s life, are among the prominent causes of acquired disability. The cost to the nation is staggering: that girl was going to be  the one to find a cure for pancreatic cancer; that boy was meant to invent a solar-powered jet.

It is important to spell out what children need in the first three years of their lives so we can all do our part to fulfil those needs as well as put systems in place that will ensure those needs continue to be met. A majority of these solutions begin with the child’s mother. Children born to teenagers; children born to underweight, anaemic women; or to women addicted to drugs, tobacco or alcohol are statistically more likely to be premature and underweight themselves. If the next generation should grow up healthy and smart, their mothers have to first be healthy and smart themselves. As a society, we have to campaign against child marriage, work for girls’ education and support good nutrition for teenagers and young women.

What happens after a baby is born? A healthy early-childhood involves:

Steady, adequate weight gain – Good nutrition means exclusive breastfeeding for the first six months. A gradual introduction of a range of healthy solids, including fresh vegetables, fruits, khichidi, curd, dalia and porridges ensures that babies get the balanced diet they require. Letting them feed themselves as early as possible makes mealtime a pleasure and not a battleground.

Height is as important as weight. Stunting – “being too short for one’s age” according to the WHO – is often overlooked as a health problem in developing countries, where many families assume short stature is just a genetic trait. Now recognised as a significant risk-marker of poor childhood development, stunted children are more likely to have poor overall cognitive and physical development, with long-term outcomes like attaining less education and having lower incomes as adults. According to the WHO, 160 million children, mostly in developing countries are likely to be have been stunted as of 2012.

Third, the Government of India has an ambitious universal immunisation program in operation. However, a UNICEF report in 2012 found that 7.4 million children still remain unprotected – mostly from poor families.

Further, avoiding infections is key to good development in young children, but it’s easier said than done. Clean drinking water within the home, indoor toilets, adequate sanitation and good personal hygiene are essential to achieve it and their provision requires an act of political will. Children contracting diseases we know how to prevent or repeatedly succumbing to infections brought on by poor hygiene can be seen as criminal neglect – not only in terms of the immediate and needless suffering these children and their families undergo but also in terms of lost potential (e.g.,a sick child is not learning and growing as she should); lost productivity (e.g., caregivers are not working because they need to nurse the child) and the negative impact on public health.

And these are the basic requirements. But we know from experience that these alone cannot guarantee optimal development. Tens of thousands of infants were consigned to the bleakest of existences in Romanian orphanages during the dictatorship of Nicolae Ceaușescu in the 1980s. These were mainly normal children with typical development. They were taken care of physically but they had no secure relationships, no bonding with caregivers and no stimulation of any kind. Infants were left in their cribs for days at a time and cared for by as many as 17 nurses staff over a week. Nobody smiled at them, played with them or responded to them in any predictable way.

The discovery of these children gave researchers worldwide a new opportunity to learn about the effects of neglect on the development of the human brain as well as to evaluate the impact of institutional care on the social and emotional well-being of young children. Brain scans of these children compared with scans of typical children revealed shocking “black holes” in their development. According to a report in the journal Science, “these children, who display a variety of behavioural and cognitive problems, have less white matter in their brains than do a group of comparable children in local families.”

The conclusion is stunning: how caregivers interact with their children can actually alter those children’s brains. And attributes as important as how they play, respond and talk are crucial to the child’s normal development.

The popular idea of a child’s brain being like a sponge makes Dr Vibha Krishnamurthy a little crazy. A Harvard-trained developmental paediatrician and the founder and director of the Ummeed Child Development Centre in Mumbai, Dr Krishnamurthy knows there is nothing passive about neurodevelopment. Babies are not just lying there just receiving experiences. “It’s more like a game of tennis,” she says, “where there’s constant back and forth between the child and the caregiver.”

In a short video (above), Dr Krishnamurthy encourages parents and other caregivers to be “attentive, available and responsive to the child’s overtures.” The reason, backed by all the available science, is simple: neuroplasticity, the ability of the brain to change and modify itself based on experiences. This process is at its peak in the very early years, with the peak years being from 0 to 3. The infant brain is constantly making connections and new pathways, as many as 700 synaptic connections every second.

But that baby’s brain needs something to spar with, as it were. Remember the Romanian babies, lying alone and neglected in their cots, hardwired to make those connections but with nothing to connect with. For many Indian children being brought up in poverty, the deprivation is not as stark but may be almost as damaging. A child who has no meaningful adult contact (e.g., with an older sibling while the parents work) or who hears mostly negative language (“Don’t touch. Stop that!”, etc.) or who has repeated illnesses, hearing or vision loss, mobility limitations or intellectual impairment will simply not develop as she should.

What can be done? Parents, grandparents and other caregivers can be trained in simple ways to enhance their interactions with their children. A child signals interest in a toy, a sound or a smiling face; the caregiver learns to respond by babbling back, commenting or by bringing the object of interest closer to the child and sharing the experience of appreciating it. Parents and caregivers suddenly see for themselves why tennis is the perfect image. Even a baby, without any words, will “answer” their overtures with smiles, wiggles and coos – and then wait for a reply.

Dana Suskind, a surgeon at the University of Chicago and the author of Thirty Million Words, a book on language and brain development, prescribes the ‘three Ts’ for optimal child development.

The first is ‘Tuning In’. Getting parents to pay attention to what they are interested in is a major victory for a child. Everything that follows is like seeds planted in well-fertilised soil. They are bound to blossom. Second: ‘Talking More’. The more language a child is exposed to, the more complex and rapid the brain’s development. Examples: if a parent of a pre-verbal child comments on the baby’s ‘world’; narrates what she is doing while she is doing it; or describe what she is both seeing and doing. It requires neither education nor money as much as time and attention.

When the child responds, at whatever level her language is at, the parent should expand and extend it. If the child says, “Go night-night,” the parent should say, “Oh, you’re so tired! It’s late, isn’t it? You’re ready to go to sleep now. Let’s tuck you into bed.” In addition to adding new vocabulary, the child is learning to connect what she is feeling (‘tired’) with the time of day (‘late’), what she needs to do about it (‘sleep’) and where (‘bed’). Think about all that is going on linguistically, cognitively and emotionally in that one short exchange.

And finally: ‘Taking Turns’. Many parents make the mistake of treating every interaction with children as a chance to lecture, scold or enlighten. When they learn to let the child take the lead sometimes, pay attention to verbal and non-verbal signals, wait for the child to respond, the dynamic changes and real communication occur. Even newborn babies can communicate if we just learn to read the signals. And multiple studies have proven that children who are exposed to a rich language environment in their earliest years do better in school and in life.

For India, where millions of children are growing up in less than perfect environments for their development, the situation could not be more precarious. Secondary school achievement levels for Indian students are alarming – the country ranks second to last in the PISA test results globally – while many other wellbeing indicators are similarly poor (maternal and child mortality, literacy, unemployment, etc). Investing in our youngest citizens is now more crucial than ever.

Other countries with similar challenges to ours have trained community workers to empower and inspire parents in early intervention approaches that have had dramatic impacts. In the so-called Jamaica Study reported in May 2014, a dramatic improvement in economic conditions was observed among extremely disadvantaged (and stunted) children when they were supported with parent-led interventions and nutritional supplements, ultimately achieving higher levels of education and earning 25% more as adults than peers who received no intervention.

UNICEF has developed a training package designed for parents, health-workers and teachers to enhance their everyday interactions with young children. While efforts aimed at school-going children are well and good, the government and major education NGOs (Pratham, Teach for India, Azim Premji Foundation, Educate Girls, etc.) should start focusing on the babies. By the time they enter kindergarten, the most important years for their brain development are effectively over.