Chemists Running out Key Medicines Due to Lockdown; UP Takes Home Delivery Route

With people panic buying medication, chemists are facing a tough time when it comes to re-stocking during the national lockdown. 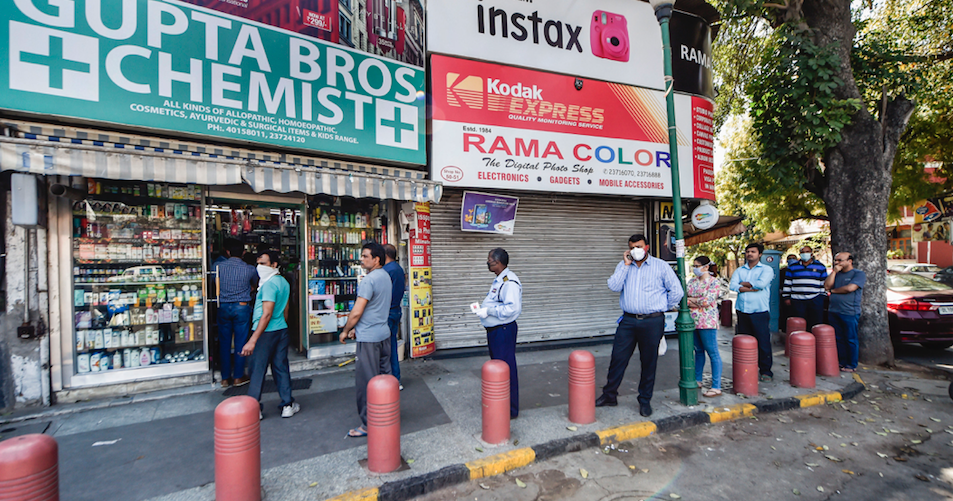 New Delhi: Ever since COVID-19 cases began getting reported in India, chemists have ben facing various challenges. First, it was the rush for hand sanitisers and face masks. Then, following a tweet by US President Donald Trump which claimed that hydroxychloroquine could provide a possible cure, chemists witnessed a rush for the malaria drug. Finally, many have also stocked up in bulk when it comes to medicines used more often.

As a result, chemists across the country are running short on some of these medicines. With the nationwide lockdown now in place, they are also facing difficulty in getting their stocks replenished by stockists and wholesalers.

The Wire took a look at the situation to find out what problems chemists are facing and how they are re-stocking.

Mohan Singh, who runs a chemist inside an apartment complex in Delhi’s Sheikh Sarai, spoke about how the demand for Crocin and other paracetamol tablets shot up over the last few weeks. “Even those who don’t need it are afraid and are stocking up,” he said.

Singh has limited his shop’s opening hours to just four hours a day. His shop assistant is also no longer coming in as he is afraid of being stopped by the police on his cycle. “I live close, so for me it’s okay.”

“Those in the neighbourhood who have regular orders with the chemist, including diabetics and others on regular medication, are now putting in orders months in advance. “We don’t keep that much supply in stock. I am trying to get enough medicines to fulfil all orders, but right now it doesn’t look possible. But if people just want enough for right now, we can manage. People are nervous and want to stock up.” 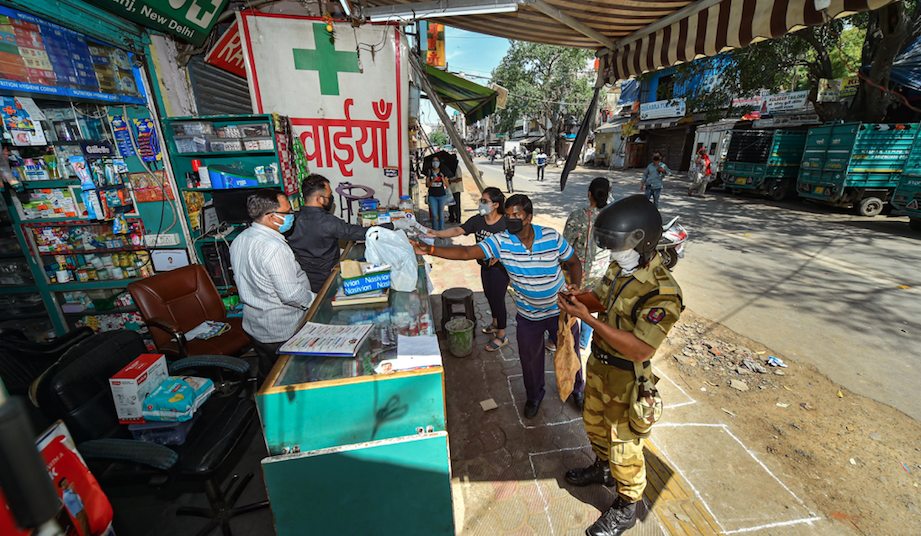 People stand in a queue at a chemist shop while maintaining social distance in New Delhi, March 25, 2020. Photo: PTI/Arun Sharma

UP chemists on accessibility issues

In neighbouring Uttar Pradesh, the main concern for chemists is to get unhindered access to stockists and wholesalers, who are mostly located in Delhi and its satellite townships. “Crossing the border and going past the police pickets is the main issue for both chemists, their workers and suppliers,” said Dhiraj Agarwal, a chemist in Ghaziabad.

“We have made copies of our drug licence certificates and given these to our workers to show to the police whenever they stop us. Normally on seeing this certificate and our own identity proofs they allow us to pass,” he said.

As for the replenishment of the stocks, he said, stockists have run out of some drugs like hydroxychloroquine, which is used for malaria treatment, but which people stocked up unnecessarily after Trump spoke about its alleged efficacy in dealing with COVID-19. “That use of that drug is not certain and yet people bought it in bulk,” he said.

Incidentally, the government later imposed a ban on the export of the drug after it went out of supply in most regions.

Several other drugs were also bought in bulk

Agarwal said people have shown a tendency to panic which has led to scarcity of some products. “They first bought face masks and hand sanitisers in bulk. That led to a peculiar situation where the government imposed a price limit on hand sanitisers. As a result we could no longer sell those with a higher printed price.”

He said people have also stored drugs for heart condition, blood pressure and cholesterol control for several months. “The stockists are supplying us with whatever they could, but supplies of some drugs were affected from the companies as their key salts used to come from abroad.”

Chemists to supply medicines at home in UP

Meanwhile, in UP, the chemist shops remained shut today as the government issued guidelines stating that retail shops would be functional from noon to 3 pm on even days and wholesale shops on odd days from noon to 3 pm.

It also directed chemist shops to not open their shutters and only affix their phone numbers so that customers may be able to place their orders. The delivery would now be done by chemist shop employees themselves.

The state government has also prohibited the sale of medicines for over 15 days to any customer.

In Rajasthan, medical stores will now remain operational in two shifts from 10 am to noon and 6 pm to 8 pm.

The supply at wholesaler shops has been affected by the lockdown. “Since the past three days, we haven’t gone to the wholesale shops to purchase the medicines. Most of the wholesalers in Jaipur are not working,” said Pankaj Gaur, a medical store owner in Jaipur.

“Three days ago,” he said, “we purchased medicines worth Rs 1 lakh and it’s highly unlikely that we would spend any more money before the situation gets clearer.”