Due to the vacancies, the panel found that the patients were being tended to by untrained doctors beyond office hours. 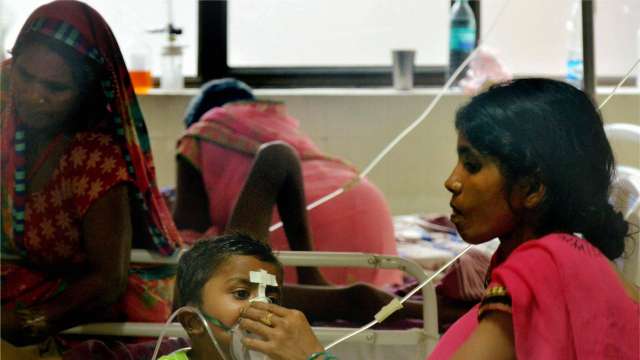 Over 70 children have died at the Gorakhpur hospital in recent days. Credit: PTI

New Delhi: A panel of senior doctors appointed by the Centre to assess the situation at Gorakhpur’s BRD Medical College after the death of over 70 children in the past few days has found gross irregularities at the Uttar Pradesh hospital.

Among the findings of the panel is a severe lack of medical staff for tending to children and an absence of even the basic hygiene standards, Indian Express reported.

A state government inquiry into the deaths of children that occurred after oxygen supply was cut off at the Gorakhpur hospital, had found overwriting in the log book related to oxygen supply and had held two senior doctors responsible for mismanagement.

According to Indian Express, the three-member technical team that was sent to the hospital by the central government to evaluate the mortality situation revealed that out of the 12 senior resident doctor posts, eight lay vacant. The inquiry also shed light on the fact that just three of the over 30 nurses present in the Gorakhpur hospital were trained to handle newborns.

Due to the vacancies, the team found that the patients were being tended to by untrained doctors beyond office hours. “The overall strength of faculty and junior residents (pursuing MD) including non-academic JR (junior residents) seems reasonable. However, the number of senior residents (post-MD residents) is grossly inadequate being four against 12 vacancies and they need to be on the floor to provide 24/7 cover and not just during routine hours. It is these post-MD senior residents who take decisive actions as regards patient care and make a significant difference to the quality of care provided to patients. Currently, the patients are managed beyond routine hours by junior residents who are themselves still students and learning to manage sick patients,” the report stated.

In its report submitted to the health ministry on August 17, the team found the hospital to be ignoring the most basic infection norms such as washing hands and use of disinfectants, and demanded a facility-based paediatric death audit.

Of the 23 children that died in Ward 100 of the BRD Medical College on August 10, six were admitted to the hospital when they were only one day old. Fifteen out of the 23 were less than a year old.

In the light of these systemic deficiencies, the three-member technical team claimed that the high death rate in the recent days when all eyes have been on the Uttar Pradesh hospital is not much different from the average death rate at the hospital.

The report stated that data from the state revealed that “there was no increase in number of deaths in the period 24 hours before (18) and 24 hours after (11)” the period where the oxygen supply was found to be lacking.