Biology, Like Modern Art, Has Need for the Abstract in its Study of Life

Anyone who thinks that a scientifically acceptable unifying theory, explaining all life in its gory details, can be propounded to solve all our problems is being unreasonable. 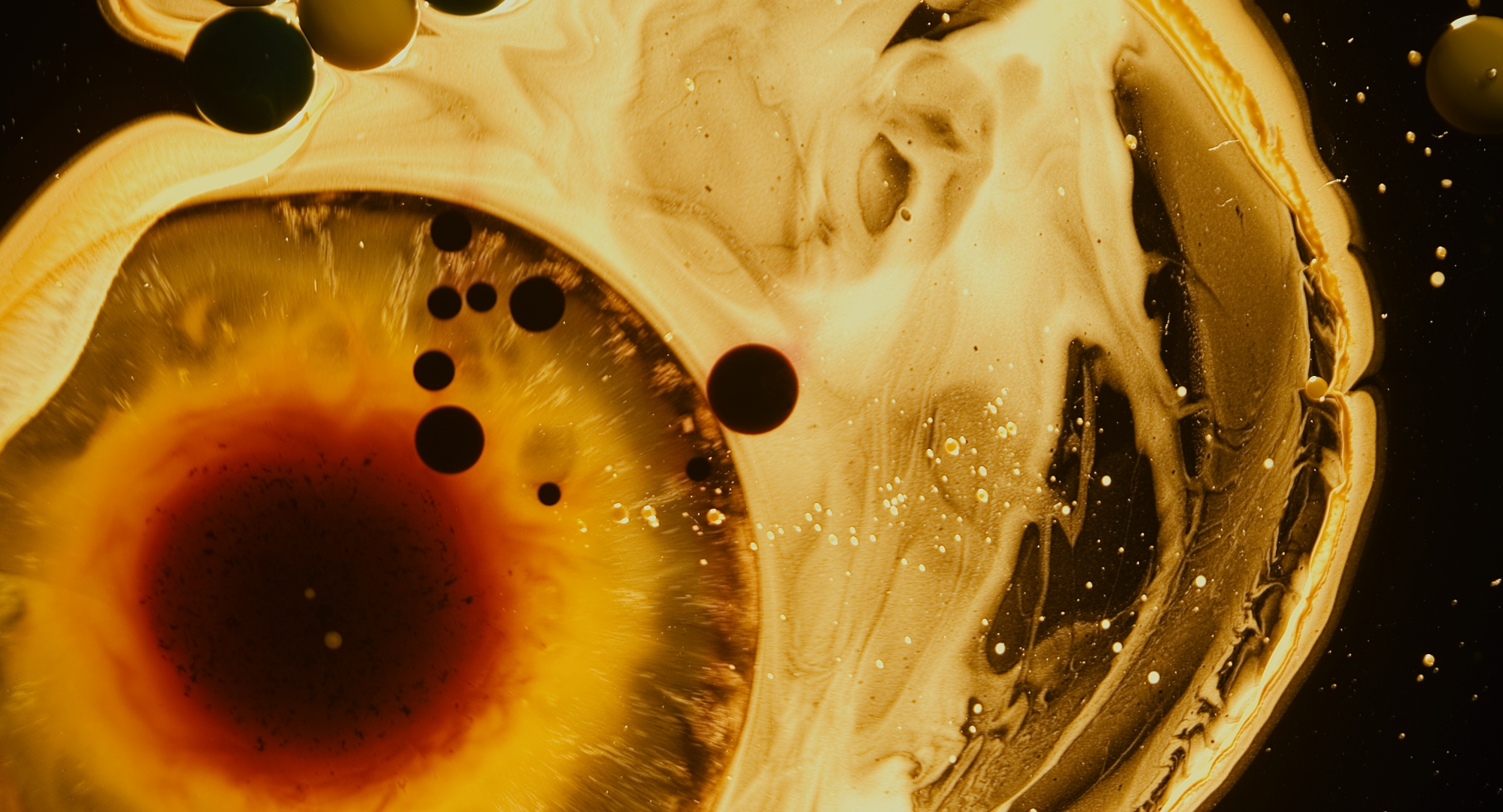 A scene from the 2011 drama film 'Tree of Life' – whose visual effects team used a variety of chemical substances and lighting effects to depict the formation of life in the universe.

‘Abstraction’ is a loaded word. In one sense, it implies the display of ideas rather than the real events or objects that these ideas might represent. The Oxford English Dictionary defines abstraction as “considering something independently of its associations or attributes”. In another sense, it implies the generalisation of a concept given a set of examples. In yet another, it might be taken to imply the extraction of the essence of a body of work in a tractable form.

In popular culture, abstraction is often associated with modern art, which speaks a ‘visual language’ of colours and strokes that touch upon and at the same time not touch upon the real world. Pure or abstract mathematics deals with concepts that often sound bizarre and at first glance unrelated to anything that we perceive in the world around us; that these at times make high technology possible is for another day. In the economic sciences, human fascinations and vulnerabilities and the chaos in how these vary over time and space are often morphed into abstract mathematical equations that keep markets running, crashing and rising.

Biology is real, and wonders about life in hard, scientific terms. Is the concept of abstraction relevant at all to biology, then? I don’t know how often people rely on shaky online resources such as Quora for information. Nevertheless, a Google search for “abstraction in biology” returns a Quora page arguing, “There are no abstractions in biology since everything is concrete.” Now, if biology refers to the science of studying life, and abstraction includes the process of extracting parts of a complex whole and representing them in a tractable form that may at once represent and not represent the multilayered reality of life, then abstraction is the centrepiece of biology.

A fractal of molecular dances

Biological systems are inherently complicated. Every cell is a potpourri of thousands of types of chemicals touching and reacting with each other in a highly viscous milieu bounded by a dense molecular wall. Biology attempts to answer how life and – for a subset of life forms – consciousness emerge from this organised bag of molecules. If one adds the immense variety of molecular solutions, held together by certain common threads,-that the vast diversity of organisms around us use to create life, the scale of the problem at hand becomes immediately apparent. Anyone who thinks that a scientifically acceptable unifying theory, explaining all life in its gory details, can be propounded to solve all our problems is being unreasonable. The only theory that comes close is the broad framework of evolution, but the finer, essential details of how this works are still being worked out and nowhere close to being solved.

It’s apparent that the only way we can study life today is by abstraction. The different sub-disciplines of biology abstract life into different representations. For the geneticist, the central tool for studying life is understanding information transfer from one generation to the next, and how mutations in information content result in new behavioural outcomes. The genetic material itself may be abstracted into blocks of several thousand alphabets, each block representing a gene, or it might be reduced into much smaller blocks of one or a few alphabets.

A biochemist interested in information transfer may not necessarily be interested in the organism’s behaviour and its relation to genes. She might see the visualisation of the genetic material as alphabets too simplistic, and instead call for a study of how individual atoms making up the DNA lexicon interact with other chemicals in the cell.

Yet another class of a scientist interested in biology is the theoretician, to whom the molecular dance inside the cell or, for that matter, the ecological-scale interactions between predators and their prey, can be reduced to a bunch of mathematical equations. These equations can then be solved to develop novel biological hypotheses that can be experimentally tested.

In the last decade or so, a class of biologist called the systems biologist has emerged. A subset of these scientists has seen molecular networks in a cell as akin to social networks. Two molecules that interact in some way can be equated to a pair of friends on Facebook for example. Each molecule becomes a node in a network, and an interaction between two nodes, an edge. The level of detail in these networks can vary from all interactions being equal in large-scale networks encompassing thousands of cellular chemicals, to detailed weighting of edges with biochemical numbers in more smaller-scale networks involving not more than tens of molecules. These networks can then be analysed to extract statistical or other numerical features, which can then hopefully be interpreted in biological terms.

None of these approaches is complete. In a way, this is not very dissimilar to four blind men perceiving an elephant differently. The astute biologist is one who is able to integrate these approaches and build hypotheses on how a certain small detail of life is written down. Thus, there has been much stress on the urgent need for the promotion of interdisciplinary research, which not only requires skill in understanding different viewpoints of the same problem, but also a mind which is open to appreciating diverse attitudes.

The large variety of life creates a problem for the biologist. We do not know how to study most of these life forms in the laboratory. A lot of detailed scientific inquiry into the biology of an organism requires manipulating it genetically, and often we do not know how to do this. And of course, we may wish to study the biology of humans, but can’t quite genetically engineer a human being – if not for technical reasons, then not for obvious ethical reasons. Therefore, a lot of the body of biological research has abstracted the huge variety of life forms into a few, tractable ‘model’ organisms. The premise here is that there are common themes underlying most forms of life, and studying one type of organism might throw light on molecular processes happening in another in broad terms if not in acute detail.

Model organisms are selected for ease of work and manipulation. Among the first such organisms for molecular biology were viruses called bacteriophages, which by multiplying in droves and frequently, were convenient to work with. At the end of the day, bacteriophages reproduce and so do humans. Even though the details of how they do vary considerably, the principle remains valid from the “lowest” to the “highest” forms of life. Bacteriophages were instrumental in us discovering that DNA, and not protein, was our genetic material.

However, viruses are not free-living and need help from better-endowed organisms to ply their trade. And so, bacteria like the famous Escherichia coli became better models for life – not only in understanding the bare bones of reproduction but also in figuring out how metabolism works in general terms and how the cell, seen as a factory, regulates consumption and production of life-giving chemicals.

Human cells are structurally very different from E. coli and other bacteria, and more complex cells such as those of beer-brewing yeasts became better models to study cellular processes closer to home. Yeasts are single-celled organisms and humans are not. Thus, multi-cellular and yet tractable fruit flies and transparent worms, which are easy to manipulate and study, became better models of human life. And then, there is the ever-present necessity for understanding and treating diseases, and we needed to use mice, rabbits and monkeys for this, at times having to use genetically modified forms of these animals as well, resulting in important breakthroughs as well as animal rights controversies.

There are times when one needs human cells and nothing else, and research in science and ethics is active in figuring out how this can be done effectively. Of course, this is not to say that model organisms are merely tools to study how humans function. Far from it. Humans form a small minority of life on Earth, and often model systems are studied for their own sake, with a view to understanding life in its fullest glory.