The UK Health Security Agency said B.1.1.529 has a spike protein that is dramatically different to the one in the original novel coronavirus. 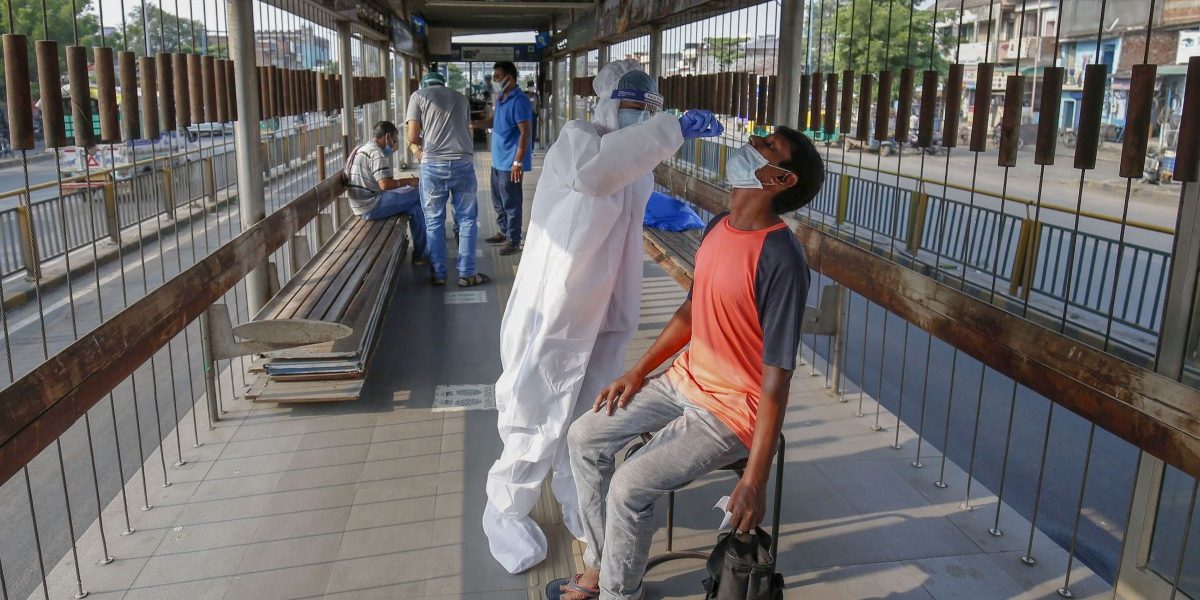 A health worker wearing a PPE kit collects a sample from a man via Rapid Antigen kit for COVID-19 test, at BRTS bus terminal in Ahmedabad, Friday, September 11, 2020. Photo: PTI

Britain said on November 26 that a newly identified novel coronavirus variant spreading in South Africa was considered by scientists to be the most significant one yet found and so it needed to ascertain whether or not it made vaccines ineffective.

Defending a ban on flights from South Africa, Namibia, Botswana, Zimbabwe, Lesotho and Eswatini, UK transport secretary Grant Shapps said that the lesson of COVID was that early action was essential.

The UK Health Security Agency said that the variant – called B.1.1.529 – has a spike protein that was dramatically different to the one in the original novel coronavirus that COVID-19 vaccines are based on.

“As scientists have described, (this is) the most significant variant they’ve encountered to date in their research,” Shapps told Sky News.

Officials have advised the government on the need to act swiftly and preemptively in case the concerns over the impact of the variant are borne out, even though it could take weeks to generate all the information needed about its characteristics.

The variant has also been found in Botswana and Hong Kong, but the UK Health Security Agency said that no cases of the variant had been detected in Britain.

South Africa had previously said that a British ban on flights from six southern African countries over the new variant seemed rushed, as EU authorities prepared similar moves and the WHO convened an emergency meeting.

Also read: ‘Oximeter Bias Against Dark Skin Is a Problem for India Too’

Britain said the variant was the most significant one found yet after banning flights from South Africa, Botswana, Lesotho, Eswatini, Zimbabwe and Namibia from midday on Friday.

European Commission chief Ursula von der Leyen said the EU also aimed to halt air travel from the region, describing the variant in a tweet as “of concern”.

A WHO working group on virus evolution is due to meet on Friday to discuss whether to officially give it that label, a designation only given to four variants so far.

“WHO is convening a meeting … to better understand the timeline for studies that are under way and to determine if this variant should be designated as a variant of interest or variant of concern,” WHO spokesperson Christian Lindmeier said.

WHO epidemiologist Maria Van Kerkhove said in a video posted on Twitter that it could take a few weeks to understand the impact of the variant’s mutations.

The rand slumped over 2% against the dollar early on Friday, as the variant unnerved investors. South African hospitality stocks also plummeted.

South Africa will speak to British authorities to try to get them to reconsider their ban, the foreign ministry in Pretoria said.

“Our immediate concern is the damage that this decision will cause to both the tourism industries and businesses of both countries,” Foreign Minister Naledi Pandor said in a statement.

As Asian countries also moved to tighten curbs, two Welsh rugby clubs in South Africa for a tournament scrambled to leave as soon as possible, and British and Irish golfers withdrew from the Johannesburg Open.

South Africa – the worst affected in Africa in terms of total reported COVID cases and deaths – had been experiencing a lull after a severe third wave of infections, until last week when new infections started to pick up.

On Thursday, the National Institute for Communicable Diseases (NICD) reported 2,465 new cases, almost double the previous day’s number. Although the NICD did not link the resurgence to the B.1.1.529 variant, leading local scientists suspect it is the cause.

The Africa Centres for Disease Control and Prevention strongly discouraged travel bans on countries that had reported the variant. “Imposing bans on travellers from countries where a new variant is reported has not yielded a meaningful outcome,” it said.

Asian and other European countries have also tightened travel restrictions, while the EU and India have announced stricter border controls.

Singapore’s health ministry said it would also restrict arrivals from South Africa and countries nearby as a precaution.

Italy imposed an entry ban on people who have visited a group of southern African states, including South Africa, in the last 14 days.

Berlin will also declare South Africa a ‘virus variant area’ after the detection of the new variant there, a health ministry source said.

European countries had already been expanding booster vaccinations and tightening curbs as the continent battles a fourth wave of the novel coronavirus, led by the more familiar delta variant, with many reporting record daily rises in cases.

The new wave comes as Europe and the United States enter winter, with more people gathering indoors in the runup to Christmas, providing a perfect breeding ground for the virus.

Germany reported a record of more than 76,000 COVID-19 infections in a day as its air force got ready for the first time in the pandemic to fly severely ill patients to other parts of the country to unburden struggling hospitals.

The novel coronavirus has swept the world in the two years since it was first identified in central China, infecting almost 260 million people and killing 5.4 million.

Japan also tightened border controls for visitors from South Africa and five other African countries, the Jiji news service reported. Its foreign ministry did not immediately respond to a Reuters request for comment.

After easing some of its travel restrictions earlier this month, India’s Central government issued an advisory to all states to rigorously test and screen international travellers from South Africa and other “at risk” countries.

Asian countries have fared better than other regions in containing the pandemic by enforcing strict preventive measures, rigorous testing and strict border controls.

Taiwan said travellers from “high-risk” southern African countries will have to go into government-run quarantine facilities for 14 days.

Asked whether those plans would have to be delayed due to the new variant, Ardern said the country had “a number of inbuilt measures to act as a layer of protection”.

“All of our planning around COVID, we have built into it the possibility of variants in the future,” Ardern said in an interview for an upcoming conference.