From China to Chhawla: Indian Student Documents Flight from Coronavirus

The Wire got exclusive access to photographs taken by an Indian medical student, Sahil Shandilya, evacuated in the second flight from Wuhan, the city at the centre of the 2019 novel coronavirus outbreak. 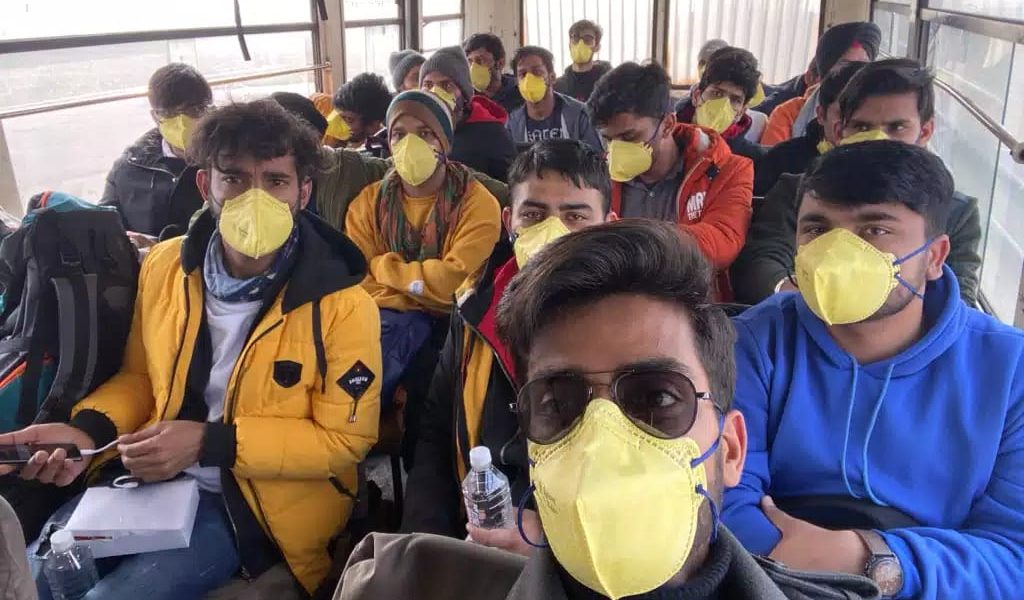 The bus’s passengers were given strict instructions to not open any windows during their journey to the airport. Photo: Sahil Shandilya

New Delhi: With the 2019 novel coronavirus spreading and killing more people in China as well as around the world, India has thus far evacuated 640 of its citizens from China’s Hubei province in two waves. The province appears to be the epicentre of the potential pandemic: the first case of the virus’s infection was reported from its capital city, Wuhan, i December 2019. All of the evacuated Indians have since been admitted to specialised hospitals in India with a strict quarantine period of two weeks.

The Wire got exclusive access to photographs taken by an Indian medical student, Sahil Shandilya, evacuated in the second flight from Wuhan. He has been taken to a special quarantine camp set up by the Indo-Tibetan Border Police (ITBP) at Chhawla, a village in the southwest part of the district of Delhi. 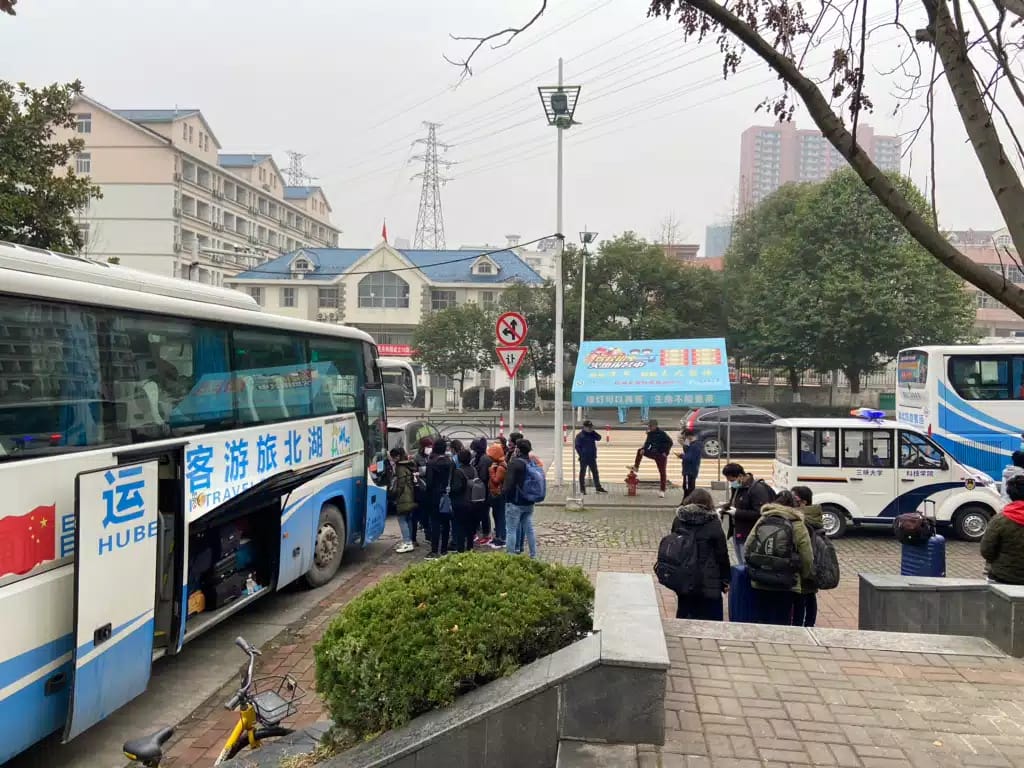 Yichang 1 – 3 – Indian students boarding the buses at Yichang that would transport them to Wuhan, where the Indian government had sent a second Air India flight to evacuate nationals from China’s Hubei province. Photo: Sahil Shandilya

The first Air India flight brought back Indians living in Wuhan; the second one has been earmarked for other cities in Hubei.

Yichang, a large city around 300 kilometres west of Wuhan, had scores of Indian students enrolled in the city’s medical university. Following a nerve-wracking period of waiting for their evacuation fight, the students were told they would be informed about the bus pick-up timings only after the Indian government’s plan was cleared by its Chinese counterpart.

At around 5:30 pm on February 1, three buses reached the pick-up point, where Indian students wearing masks were standing with the packed bags on the pavement. It was another two hours before the buses rolled out from Yichang because the body temperatures of all those departing had to be checked to ensure they weren’t carrying the virus abroad. And just before they left, a university representative gave a pep-talk and wished for their quick return, and provided another set of safety instructions.

By around 7 pm, a toll plaza had thoroughly checked the documents of each passenger on the bus while exiting Yichang and another while entering Wuhan, where the evacuation flight awaited. Since all major cities in Hubei have been locked down, driving buses on the highway also requires a green signal from the authorities. Some four hours after they had started, the students reached Wuhan international airport. Being a special flight, they first received their boarding passes, then had their bags screened. 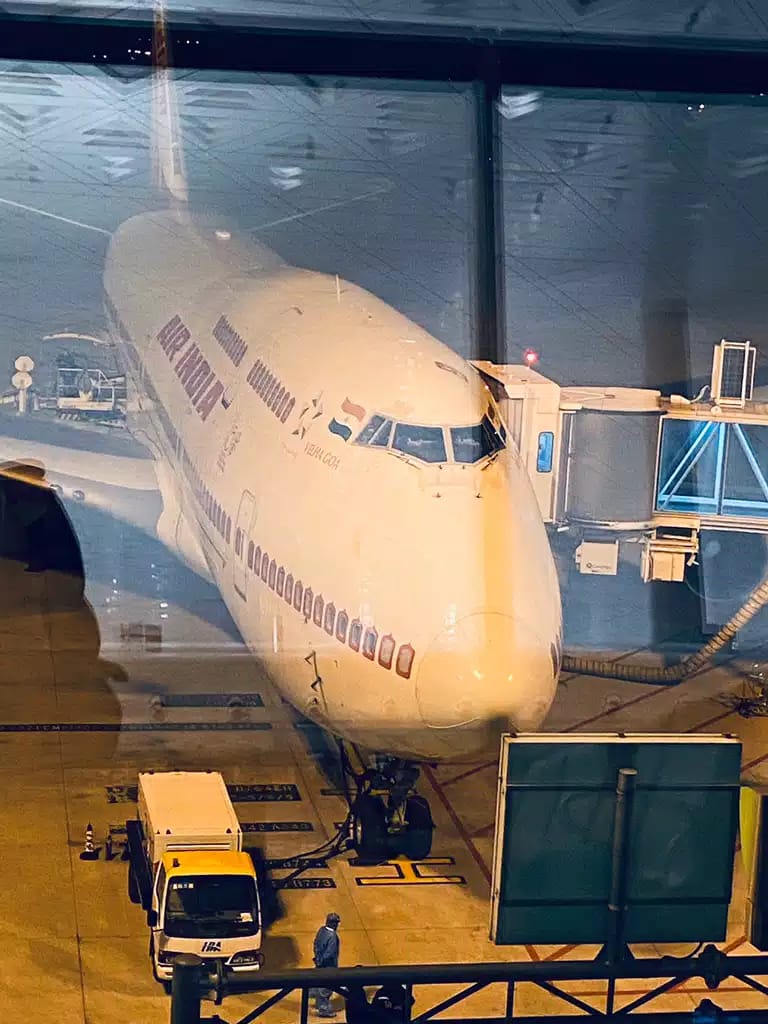 At around 11 p.m. on February 1, Indian students from Yichang arrive at Wuhan international airport to board the Air India flight waiting for them. Photo: Sahil Shandilya

During immigration, they were also asked to walk through a full-body scanner that also detected their temperature. At this stage, 10 students were found to have a higher body temperature and asked to stay back. One of them was Shandilya’s roommate. “When they checked the temperature in Yichang before the bus left, it was completely normal,” Shandilya told The Wire. “His temperature may have risen a little as he had not been [resting] due to all the tension and then the long hours of queuing at airport. I hope the authorities allowed him to go to Yichang instead of keeping him in Wuhan.”

The students started to board the Air India flight at around 3:30 a.m. on February 2. As soon as they entered, they were asked to remove their masks and provided new ones, as well as asked to clean themselves with a sanitiser. 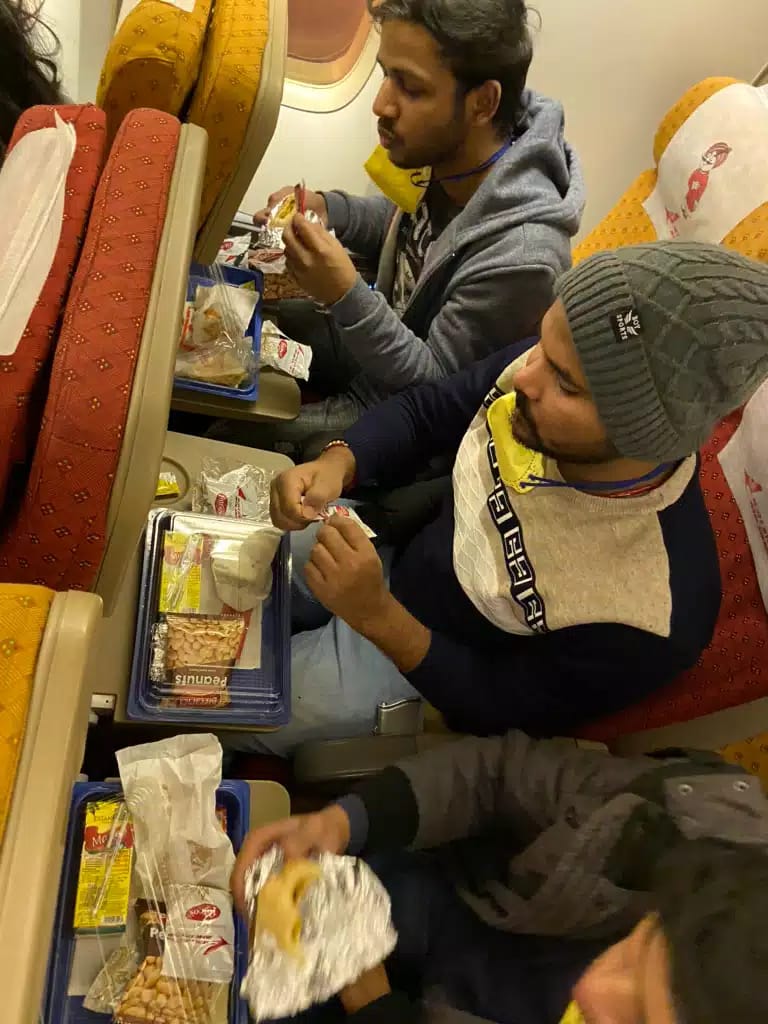 As most Indians could not remove their masks during their long journey from Yichang, the dinner inside the flight was their first meal of the day. Photo: Sahil Shandilya

Dinner had been set out at each seat, as if the crew had anticipated their passengers’ hunger. “I had not eaten anything since I left Yichang as I was too afraid to remove the mask, even for a few seconds,” Shandilya said. After a wait of two and half hours on the tarmac, the flight took off just a few minutes before 6 am local time (4:30 am IST), with 323 Indians and seven Maldivian nationals. 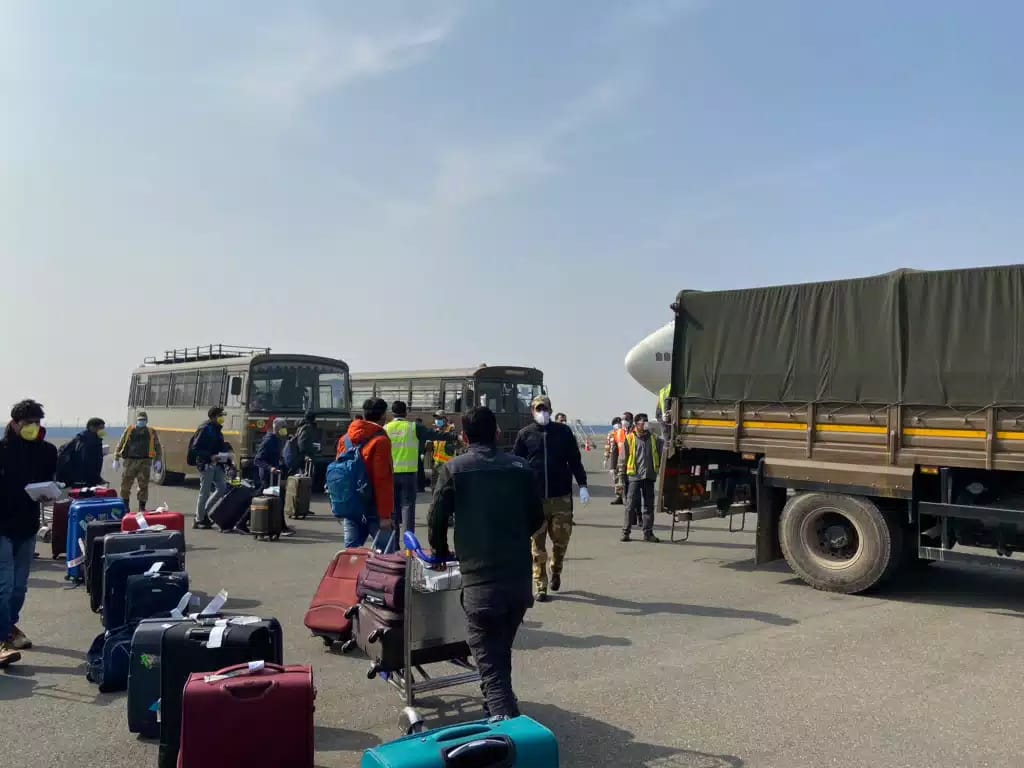 After collecting their luggage, the Indians from Hubei were taken in buses parked on the tarmac. Photo: Sahil Shandilya

They arrived at around 9:30 am IST in New Delhi, and were greeted by medical personnel on the ground wielding digital thermometers. They had also pitched white tents on the side of the runway itself, where immigration authorities stamped the students’ passports, as well as a baggage pick-up point. They were then taken to buses that then transported them directly to the quarantine camp in Chhawla – their home for the next two weeks. 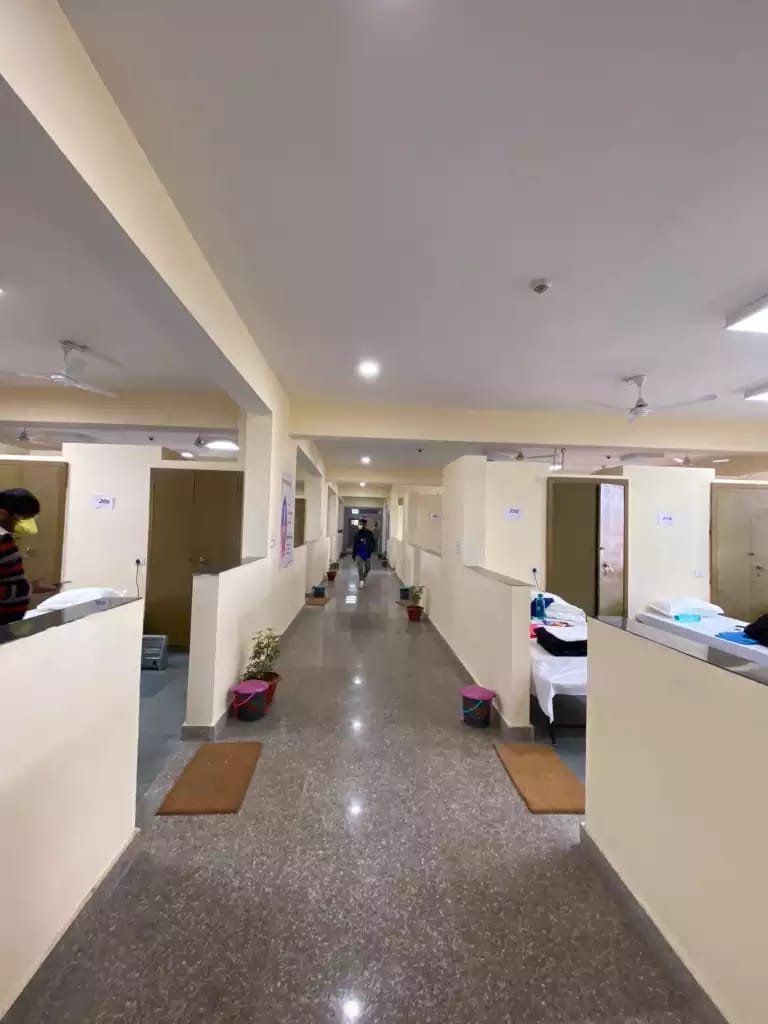 “The facilities looked brand new. We were given everything we wanted.” Photo and quote: Sahil Shandilya

The passengers of the first flight had been taken to an Indian army camp in Manesar, Haryana. 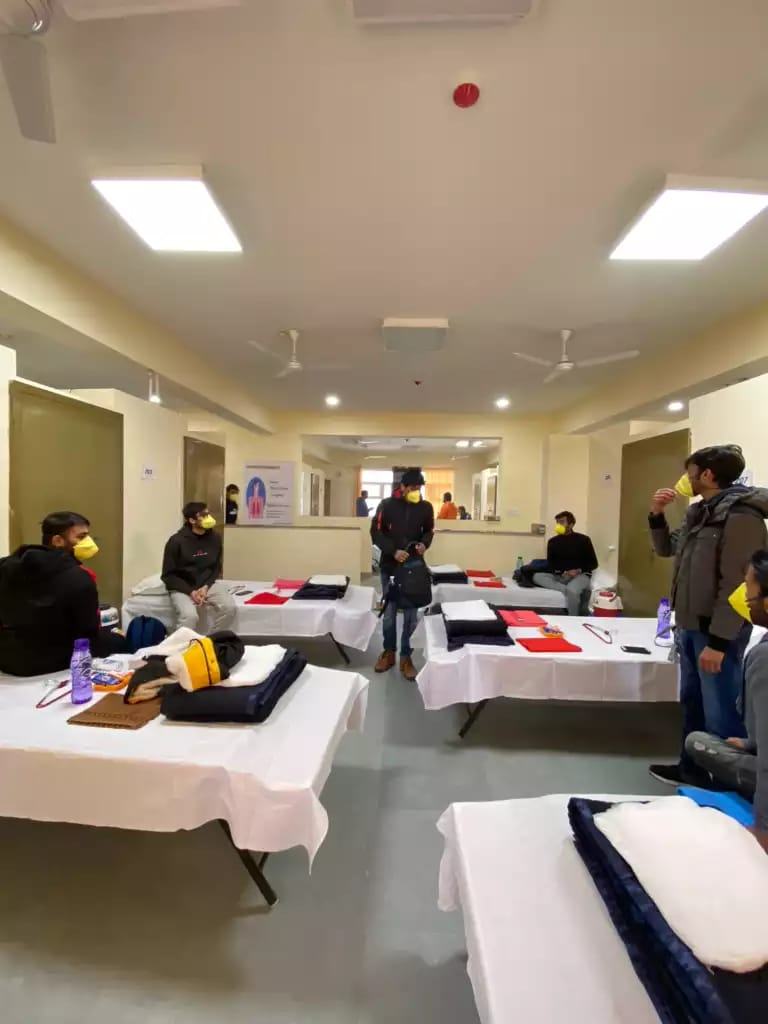 Each ‘room’ had six beds, with a cupboard next to each bed. Photo: Sahil Shandilya

The quarantine facilities included a four-storey building inside the ITBP camp in Chhawla: the ground floor housed administrative facilities with a control room; it was also where residents could borrow ancillary items like phone chargers. 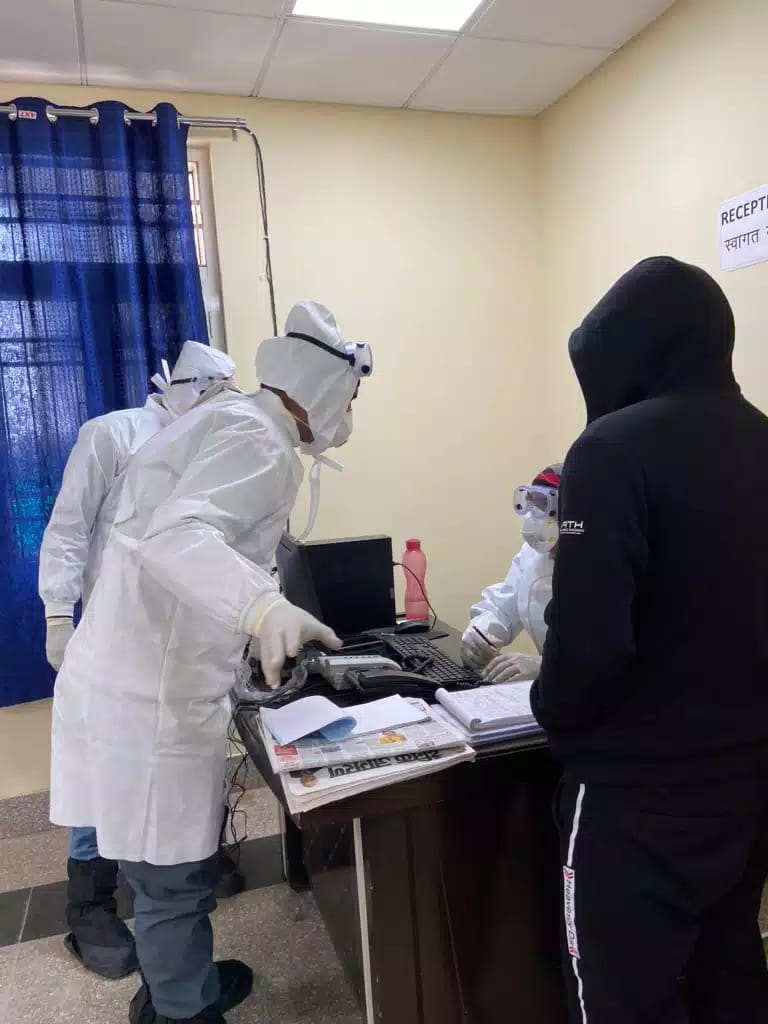 A control room manned by men in protective clothing downstairs. All outside employees, including cooks and cleaners, could enter the building only with the full protective suit on. Photo: Sahil Shandilya

Each room on the upper floors, semi-open to the corridor, had six beds and a space-heater; each bed had two blankets and each occupant received a bar of soap, two towels and water jugs. “We have been given the best facilities,” Shandilya said.

As they settled down on the first night, most of them slept heavily but some others paced around the common facilities, including playing a few rounds of table tennis. 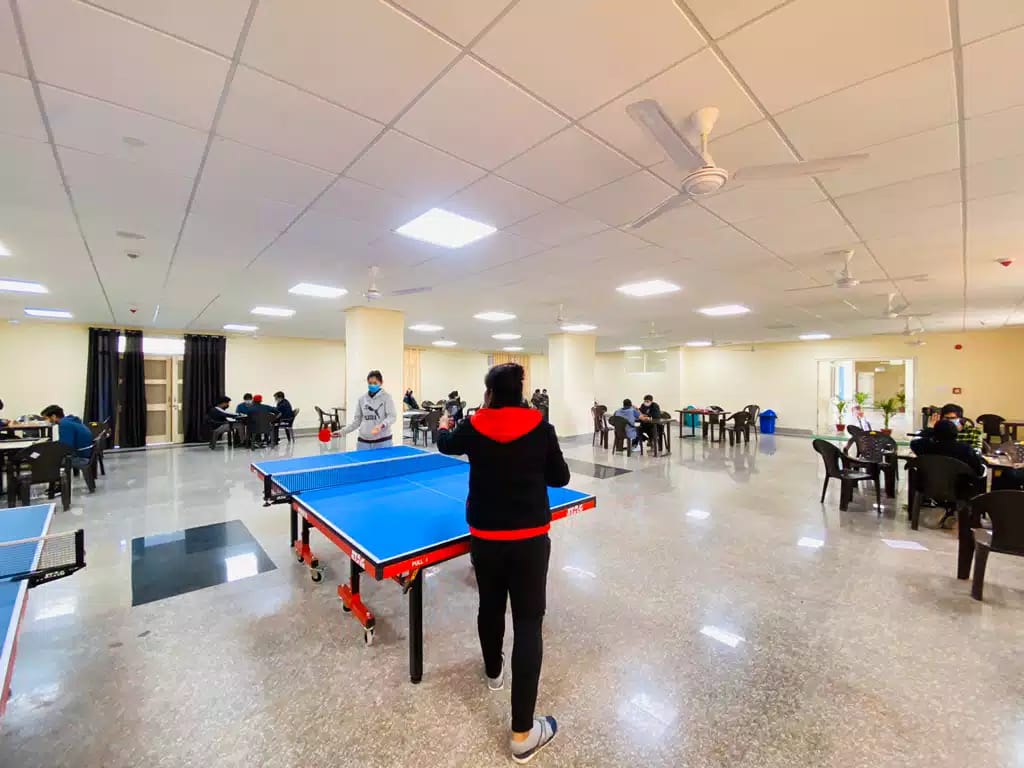 The two common rooms were equipped with a television, table-tennis tables and various board games. Photo: Sahil Shandilya

The camp also had two canteens. 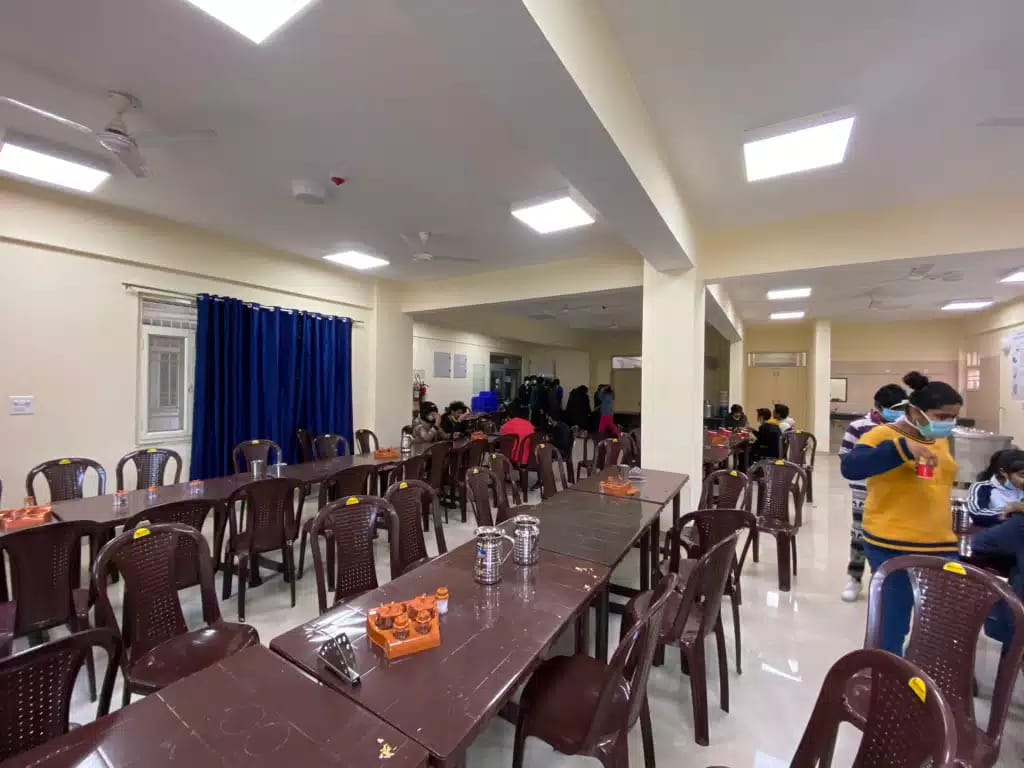 Queuing up for lunch at one of the two canteens in the building. The fare is simple. Photo: Sahil Shandilya

There was also a medical check-up at around 1:30 am on the first night, followed by daily checks at other times on the other 13 days. 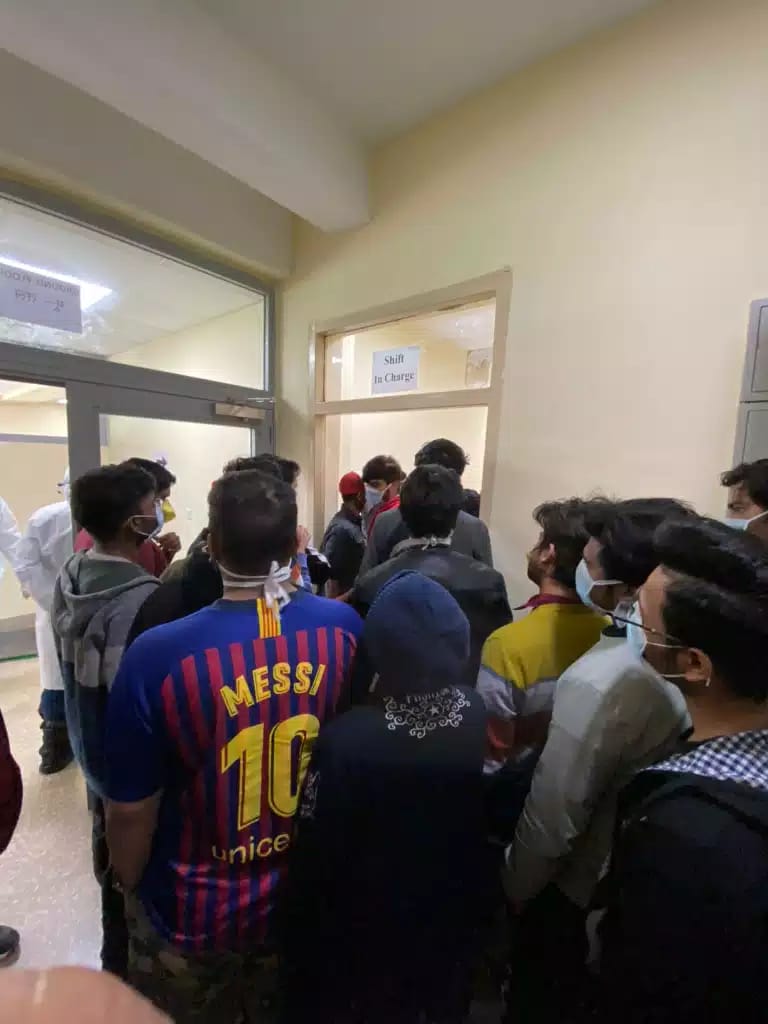 Every day, the residents of the quarantine camp would be called at a specific time for a health check-up. Photo: Sahil Shandilya

With their movement restricted, most students spent most of their time on their phones to stay in touch with family and friends. There was a Wifi network but it wasn’t very fast, thanks to the number of users using it. “I have lived in boarding schools all my life. So this is not difficult for me. It seems that I am back in my childhood,” Shandilya said.