After 200 Days of Fighting for Their Rights, Kerala Nurses' Strike Shows No Signs of Letting Up

Despite working hours being nearly double the statutory requirement and not enough pay, the hospital management has refused to give in to the demands of the nurses. 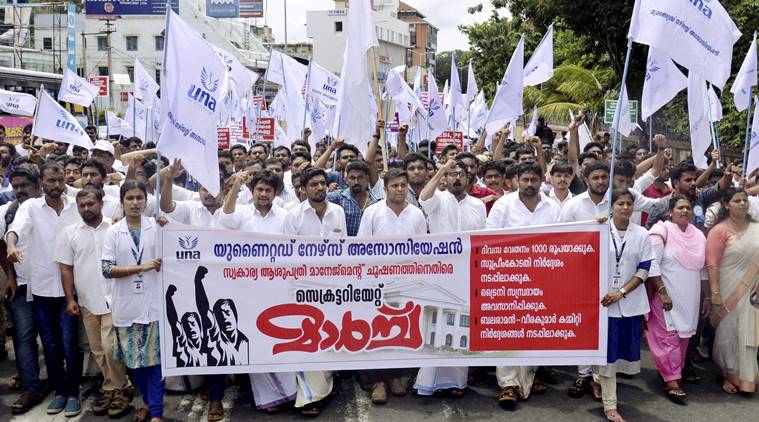 Alappuzha (Kerala): It’s been nearly 200 days since more than 100 nurses have been on an an indefinite strike since 21 August 2017 over the demands for better working conditions at the K Velayudhan Memorial (KVM) Hospital, in Alappuzha, Kerala, under the banner of the United Nurses Association (UNA).

Despite the resolve of the union and several conciliation meetings mediated by the state government, the KVM management has refused to respond to the nurses’ demands. UNA’s contention is that more than 100 nurses have been unfairly dismissed and not been paid for over six months. The hospital, which is located just off National highway 66 in Cherthala town, some 20 km north of Alappuzha, is a reputed 300-bed tertiary care facility which provides speciality services such as neurosurgery, cardiology, nephrology and ENT services amongst others.

Despite its high profile, work conditions at KVM fall short of basic legal requirements. According to Kiran Joshi of the UNA, working hours at KVM are nearly double the statutory requirement at 350 hours per month (instead of 190 to 208 hours). The hospital uses a ten-hour day and 14-hour night shift, which is already longer than the conventional eight-hour shift system. There are even instances of nurses being asked to perform shifts of up to 20 hours as the hospital is short-staffed.

Wages also fall short of statutory requirements. According to UNA, despite the 2013 revision of wages in Kerala to Rs 11,500 per month, the actual payment received by nurses at KVM ranges from Rs 6,000 to 9,000. The hospital deploys nurses as ‘trainees’ even after several years of work to justify wages below the statutory minimum. In addition, the management sometimes uses the trainee system to deploy new recruits on full-fledged duty without a salary at all. Statutory Employees’ State Insurance (ESI) and Employee’s Provident Fund (EPF) are also denied through this system. Not only is the trainee system used to engage in wage theft, it creates job insecurity that can readily be used to get rid of so called ‘disruptive elements’, including those that engage in fair industrial action to demand implementation of the law.

“The nurses currently on permanent contract are drawing EPF and ESI only from 2017, after UNAs intervention,” said Joshi. Nurses also often get fined for taking their statutory leave.

“The current wage at KVM is inadequate for nurses to sustain their families as well as repay their educational loans,” says Joshi. Most families take loans to educate their children in private nursing colleges due to the lack of seats in the public sector. Monthly EMIs for the loans are typically around Rs 4,000 to 6,000.

In June and July 2017, UNA initiated a state-wide struggle to implement the Supreme Court order to bring the salary of nurses working in the private sector at par with government facilities. Not surprisingly, the nurses from KVM joined the strike in large numbers. The strike was called off on 20 July following a decision by the Kerala government to revise the minimum wage for nurses in the private sector. After the strike, UNA units in different hospitals demanded that working conditions be changed as per the decision.

“Not only did the KVM management refuse, it did not renew the tenure of two ‘trainee’ nurses who were seen as leading the strike”, says UNAs Sujanapal Achuthan. Subsequently, the nurses re-started their agitation and began an indefinite strike at the hospital from 21 August 2017.

The government was quick to call for a conciliatory meeting three days later, but it was reported that the KVM management did not attend. In October, the KVM management closed down the hospital citing financial difficulties, de-facto resorting to a lock out. Nevertheless, doctors were retained with full salary, while the rest of the employees were terminated. It is estimated that the management paid around Rs 60 lakhs to 40 doctors in November alone. In a controversial move, the hospital reopened in the first week of January 2018, by appointing 40 new nurses. “This is illegal as the High Court of Kerala had ordered that new staff could not be appointed as long as the ongoing dispute is not resolved”, argues Joshi.

The dispute intensified with the re-opening. On January 29, simultaneous marches were held in several districts across Kerala demanding an end to the trainee system, the reinstatement of the 112 dismissed nurses of KVM and the implementation of the 2013 wage revisions. After the talks convened by the Kerala State Labour Minister T.P. Ramakrishnan failed on February 8, UNA State Secretary Sujanapal Achuthan started an indefinite hunger strike in front of KVM Hospital. A few days later, the striking nurses picketed NH66 and nurses in Kerala and across 13 states in India observed a ‘black day’ on February 12 in support of the KVM agitation. In an impressive show of strength, on 15 February 2018, 50,000 nurses stopped traffic on NH66 for eight hours, until the Alappuzha District Collector met them. According to reports, the Collector submitted a report to the state government demanding urgent intervention in the matter.

The KVM management and the Kerala Private Hospitals’ Association (KPHA) have maintained that the strike is unlawful. KPHA has argued that the strike notice period requirement was not respected and has taken the matter to court. Its contention is that as hospital services are a public utility, the strike period should be longer than for other industries.

This was dismissed by the high court as Kerala has not promulgated hospital services as a public utility. KPHA then demanded police intervention to remove the striking nurses. UNA responded that the nurses have kept the emergency and casualty departments functioning and access to the hospital has not been affected. The Kerala high court found that the striking workers are resorting to “an accepted mode of ventilating their grievances and seeking settlement of their demands”, and advised the KVM management to move to the conciliation table. It ordered that there should be no “interference in any peaceful agitation carried by the employees against the employer”.

The Supreme Court upheld the judgement on February 23. This is a setback for the KVM management, but it has not changed its position with regard to the demands of the workers.

The demands of UNA at KVM are related to the terms of service, especially the implementation of a three-shift system of eight hours, payment of 2013 wages and statutory benefits. UNA is also demanding that the 112 workers dismissed because of taking part in the agitations be reinstated. They want the support of the state government in bringing KVM hospital’s management to the negotiation table, or necessary measures against any party that has no intention to find a fair solution to the dispute.

The Indian Medical Association (IMA) has asserted that nurses at KVM can only be taken back if the hospital has enough business to employ them. According to industry statements, in Kerala, the salary component constitutes nearly 60 to 70% of the hospital’s annual turnover. This implies that a considerable change in the salary of the major workforce could have an impact on profitability.

However, a recent study shows that for 89 hospital companies that provided data in 2014, in average the wage component was only 17% of total income. The data also shows that remuneration of managerial personnel such as doctors are very high and there is a substantial gap with those of nurses and other workers. While this data is for an all India scale, it does give an insight into the trends in the industry.

UNA held its First National Convention in Delhi on 25 February with more than 3,000 delegates participating from 16 states. The convention reiterated the solidarity of the nursing community with the KVM struggle. UNA president Jasminsha Manthadathil called for an immediate resolution to the KVM struggle.

“The strike of KVM nurses is emblematic of the struggle that nurses face all over the country. At KVM Hospital, nurses are facing victimisation because of demanding implementation of the law of the land. We know our rights and we will fight for our rights and our dignity,” he asserted.

UNA had announced an all-Kerala mass casual leave starting from March 6 to press for the finalisation of the wage revisions process started in July 2017, and for a resolution to the KVM dispute.

But on March 5, the high court agreed to mediate the wage revision stand off and a new conciliation meeting has been called by the labour commissioner for March 6.

While the workers don’t have much faith that the conciliation will bear fruits, all they can do now is continue their fight for labour rights.

Susana Barria is a researcher with Public Services International (PSI), a global federation of trade unions, and is associated with People’s Health Movement (PHM) and Jan Swasthya Abhiyan (JSA). She can be contacted at susana.barria@world-psi.org.