Dinesh Sharma, who could not emerge as a prominent Brahmin face in the party despite having served as the deputy CM, was replaced by Lucknow Cantonment MLA Brajesh Pathak. 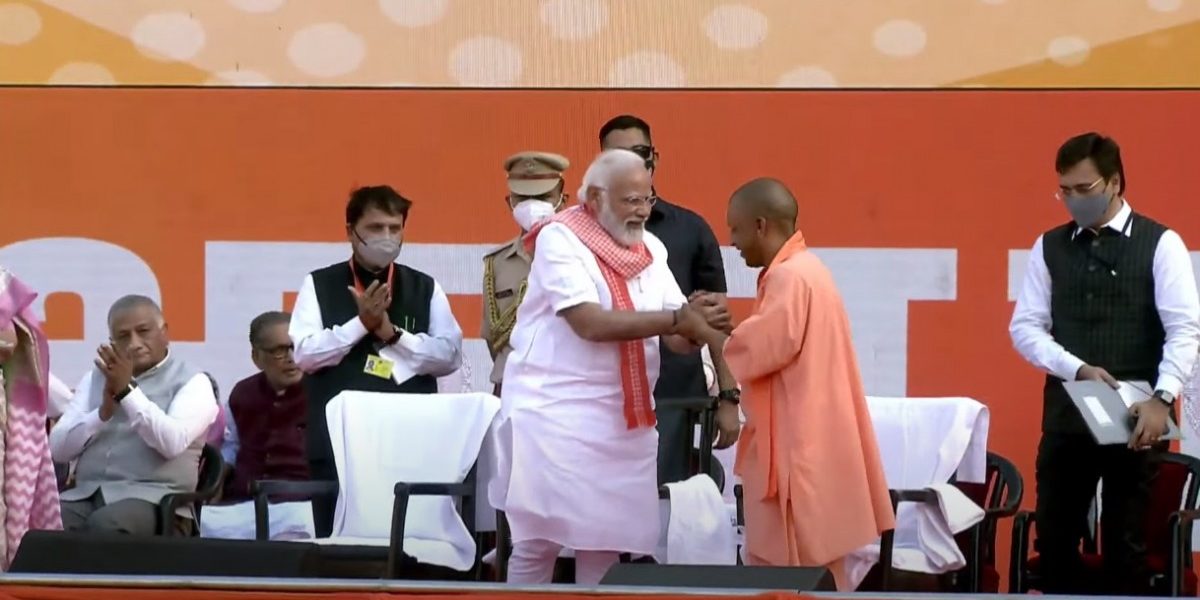 Adityanath with Narendra Modi at the former's swearing in ceremony. Photo: Twitter/@BJP4UP

Adityanath was unanimously elected the BJP legislature party leader in UP on Thursday, after which he staked claim to form the government.

BJP’s thrust on consolidating Brahmins, Other Backward Classes, and Dalit communities – a section of whom had shown signs of disgruntlement against the Adityanath government, clearly reflects in the social composition of the Adityanath 2.0 government.

Dinesh Sharma, who could not emerge as a prominent Brahmin face in the party despite having served as the deputy chief minister, was replaced by Lucknow Cantonment MLA Brajesh Pathak.

Formerly a Bahujan Samaj Party MP, the new deputy chief minister is considered to be influential in the state’s Brahmin community, estimated to be over 10% of the electorate.

In keeping with its convention, BJP did not field a single Muslim candidate in the assembly polls. However, in what appears to be an attempt to reach out to OBC Muslims, BJP has chosen to drop former minister and Shia community leader Mohsin Raza and has, this time, included Danish Azad Ansari. Ansari is a little-known leader in Uttar Pradesh but has been in the Akhil Bharatiya Vidyarthi Parishad for years and also served as BJP’s minority morcha president in the state.

In the same vein, the saffron party also decided to retain OBC leader Keshav Prasad Maurya as the deputy chief minister. Maurya lost elections from Sirathu but his deep connection with the Sangh Parivar is said to have tipped the scales in his favour.

Among the most prominent faces to get a cabinet minister’s position is Arvind Kumar Sharma. Sharma is a former Gujarat cadre IAS officer, known to be one of the closest aides of Prime Minister Narendra Modi since the time he was Gujarat chief minister.

In Gujarat, he handled projects most significant to Modi’s image, like the Vibrant Gujarat summits. He worked with the Chief Minister’s Office until 2014 in Gujarat and was then moved to the Prime Minister’s Office when Modi became prime minister. He took voluntary retirement from the central services in 2021 to join the BJP as a member of legislative council in Uttar Pradesh.

Immediately after he joined the BJP, speculations were rife that Sharma would be given a ministerial position in the last cabinet reshuffle. His sudden decision to formally join the BJP was also seen as indication that the party’s central leadership was keen to monitor the Adityanath-led Uttar Pradesh state government, leading to rumours about a possible rift between Modi and Adityanath.

However, his appointment was postponed and he was made the BJP vice-president. This time around, however, Sharma has been made a cabinet minister.

Aseem Arun, who resigned from the IPS to join the BJP days ahead of the elections has also been given a ministerial berth. He won from the Kannauj reserved constituency by defeating three-time Samajwadi Party MLA Anil Kumar Doharey.

Jitin Prasada, who had quit the Congress to join the BJP just ahead of the polls, made it to the state cabinet.

Daya Shakar Singh, Nitin Agarwal and Kalyan Singh’s grandson Sandip Singh have been made ministers of state with independent charge.

Altogether, 52 ministers were sworn, in along with Adityanath as the CM.

More than 55% of the total 273 MLAs from the BJP-led alliance belong to the OBC (89) and Dalit (63) communities. Among the ‘upper’ caste leaders, most ministerial berths have gone to Brahmins and Thakurs.

The BJP-led alliance had won 273 of 403 seats in the just-concluded Uttar Pradesh Assembly polls. While the BJP got 255 seats, its allies Nishad Party and the Apna Dal (S) bagged 18.