Now, Witness In Another NCB Case Claims He Was Made to Sign Blank Papers by Sameer Wankhede

The NCB on Wednesday recorded Wankhede's statement for more than four hours in connection with allegations of extortion levelled by Prabhakar Sail, a witness in the Aryan Khan drugs case.

New Delhi: Days after Prabhakar Sail, a witness in the Aryan Khan drugs case claimed that he was made to sign blank papers by the Narcotics Control Bureau (NCB), another witness in a separate drugs case on Wednesday levelled a similar allegation against the agency’s officials, including its Mumbai zonal director Sameer Wankhede.

The witness, Shekhar Kamble, a resident of Navi Mumbai, said he was made to sign on 10-12 blank papers by Wankhede and others, which were later used as panchnama in connection with a Nigerian national’s arrest from Navi Mumbai’s Kharghar in August this year.

In a separate development, the NCB on Wednesday recorded Wankhede’s statement after Sail’s allegation of extortion. Sail’s statement was also recorded, but by the Mumbai police.

He also claimed that although no drugs were recovered from the Nigerian national, the NCB falsely showed that some amount of MD was found on him.

He said he had played the role of an informer in that case and after the raid in Kharghar, the NCB had caught two Nigerians, but let off one of them, he claimed.

“On the day of the raid in August, I along with six NCB officials reached Kharghar to catch a Nigerian national, but he managed to flee from the spot. Later, we went to another location in Kharghar, where around 50 Nigerians were present. As we entered, all of them escaped, but the officials caught two Nigerians and brought them to the NCB office, where one of them was let off,” he said.

“After taking my and friend’s Aadhaar cards, the NCB officials asked me just to sign 10 to 12 blank papers. When I asked them about the panchnama, Wankhede and other officials said they will write it and I don’t have to worry,” Kamble added.

He said he came to know that he was a witness in the case after Maharashtra minister and NCP leader Nawab Malik made public a list of the agency’s 26 different drugs cases and the witnesses in those cases.

He said after he read Malik’s claims, he rang up NCB officer Anil Mane on Tuesday to express his concern over the claims in the case against the Nigerian.

“The officer asked me to visit the NCB office on Wednesday, but I did not go,” Kamble said.

Kamble said he now fears for his life as anything can happen to him since he has spoken up about the NCB’s “frauds”.

Sail, a witness in the cruise drugs case, had also claimed that he was made to sign blank papers by the NCB. He levelled sensational allegations of extortion against those involved in the case, saying that he had overheard K.P. Gosavi – an apparent private detective who was the NCB’s ‘independent witness’ in the case’ – saying that they would ‘settle’ for Rs 18 crore to let off Aryan Khan, of which Rs 8 crore would be paid to Wankhede.

The case in which Kamble was a witness is against a Nigerian national who was held at a Nigerian community kitchen. It said the accused is a big MD trafficker or supplier in Navi Mumbai and has international linkages.

Minister Malik has repeatedly termed the cruise drugs case as “fake” and levelled various allegations against Wankhede, including illegal phone tapping and forging caste certificates. Wankhede has refuted the allegations and has denied any wrongdoing. He has accused Malik of smearing.

The NCB on Wednesday recorded Wankhede’s statement for more than four hours. A team headed by NCB deputy director general (northern region) Gyaneshwar Singh has collected some “crucial documents of the case from the (western) zone office”, according to news agency PTI.

“Taking ahead the investigation we recorded statement of Sameer Wankhede for four-and-a-half-hours during which he has shared many things before the team. We will collect some more documents from him in the coming time, and if required, we will get more information from him,” Singh told media persons.

Wankhede’s statement was recorded at the NCB’s office in Ballard Estate in south Mumbai and the CRPF mess in suburban Bandra.

When asked whether Wankhede will continue to probe the cruise drugs seizure case, Singh said, “Let the investigation go ahead. If I have something concrete then only I will be able to submit a report to my DG.”

He also appealed to Gosavi, the absconding witness of NCB in the cruise drugs case, and Sail, another independent witness in the case, to join the enquiry. “If they had any complaints or allegations they can approach us and record their statements,” he said.

Responding to a query, Singh said, “We want to conduct an impartial and independent inquiry and that’s why we chose different locations for camping rather than the NCB zonal office”.

On Wednesday morning, a five-member vigilance probe team of the NCB landed in Mumbai and started its probe. They collected some documents and recordings from the NCB office at Ballard Estate in south Mumbai.

DDG Singh is heading the departmental vigilance probe into allegations of extortion.

“All the material witnesses in the probe will be called to record their statements, I will not take the name of any individual,” Singh added.

Sources earlier said the inquiry will also look into Gosavi, who was spotted near Aryan Khan after the raids, and the procedures followed by the sleuths while entrusting the custody of all the accused arrested on October 3 from the international cruise terminal in Mumbai. Photos and videos of Gosavi with Aryan Khan have gone viral on social media and other news platforms.

The role of all the officers and witnesses involved in the case will be probed and it will be recorded if they followed the NCB manual and procedures mentioned in the Narcotic Drugs and Psychotropic Substances (NDPS) Act during such operations, they said. 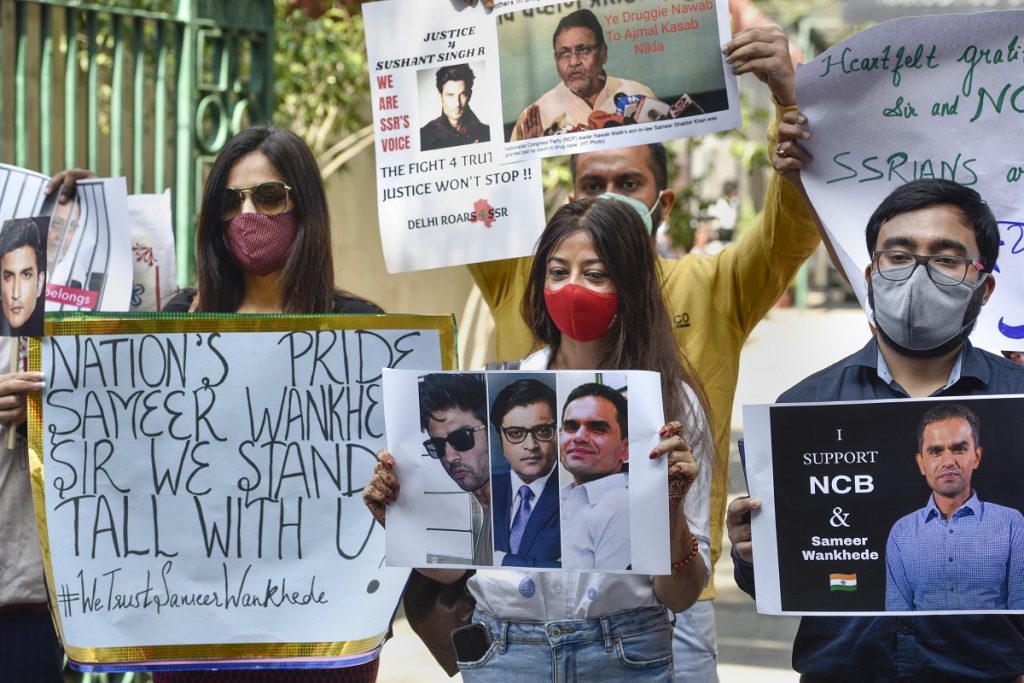 Meanwhile, the Mumbai police recorded the statement Sail for over eight hours in connection with his allegation of extortion by NCB officials in the drugs seizure case involving Aryan Khan. Sail appeared before the city police on Tuesday evening and the process of recording his statement was completed at around 3 am on Wednesday, according to a police officer.

He has been provided protection by the city police in the wake of revelations he made in his application, an official told PTI.

On Tuesday, Sail’s lawyer Tushar Khandare claimed that his client was “misused” during the NCB raid on the cruise ship off the coast of Mumbai earlier this month.

The city police on Tuesday said they received four applications alleging extortion by NCB Mumbai zonal director Sameer Wankhede and other officials, and have launched an enquiry to verify these claims.

One of the applications was sent by Sail.

Sail on Tuesday said he stood by his allegation of extortion demand against Wankhede and others, and nobody had tutored him.