Who the Hell is Partha Chatterjee?

The media has gone to town trying to figure out who Partha Chatterjee is. What can be added to the picture they've created? 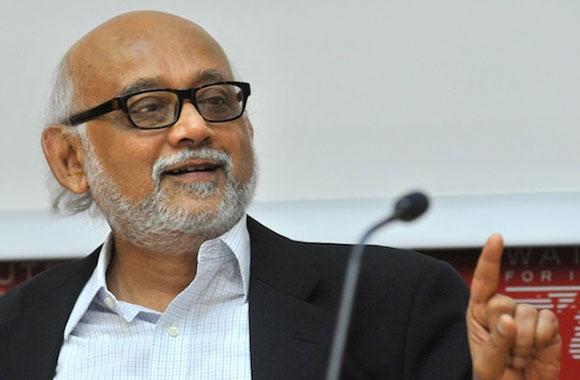 Those who have not been around academic circles, have not heard of General Dyer, not watched The Namesake, nor confused Partha Chatterjee with his namesake, might be wondering what the fuss about Professor Partha Chatterjee is about. Parthada recently referred to the justification of using a human shield by the Indian Army in Kashmir as the General Dyer moment of the independent Indian state’s army. For those whose history education is fading a bit, it is worth providing a reminder that Dyer was the general who ordered the Jallianwalla Bagh massacre; and Professor Chatterjee wrote a short article in The Wire pointing out “chilling similarities between the justifications advanced for the actions of the British Indian army in Punjab in 1919 and those being offered today in defence of the acts of the Indian army in Kashmir”. Newspapers and media both sympathetic and hostile recorded that Partha Chatterjee was a scholar of postcolonial studies, an important member of the Subaltern Studies collective, and Professor Emeritus at Columbia University, New York. That’s the bare bones of it; what can be added to that picture?

I first knew Partha Chatterjee from a theatre group we were in together when I was a teenager. For the longest time I didn’t know the actor and the academic were the same person. Several persons then referred to him affectionately as Professor Calculus, which was a clue, perhaps, that he was a professor, but since he wasn’t hard of hearing I attributed this nickname to a slightly far-fetched visual analogy. When I met him as a fellow academic I was pleasantly surprised to find that I knew him already, and I mentioned to him that I hadn’t known that he was the Partha Chatterjee who was actually Partha Chatterjee (he replied, ‘good’). Our last two meetings were at College Square in Calcutta (where ironically the ruling party in West Bengal is seeking to ban all public demonstrations), at a protest against sexual violence, and then at the annual South Asian Studies conference at Madison, Wisconsin. He was at home in both spaces, though he was aware that his presence was not going unnoticed at either location.

The Nation and Its Fragments by Partha Chatterjee.

As he now stands by his statement and implicitly asks us all to do our jobs pointing out the familiarity of the ugly face of the stranger-in-violence, it is worth remembering that Partha Chatterjee has in his time both been seen as insufficiently nationalist and too overtly nationalist. In Nationalist Thought and the Colonial World (1986), he argued that Indian nationalism was to some extent derivative, but it did not come to its central tenets, represented for him in the thinking of Jawaharlal Nehru, via a straight line. ‘Sometimes the shortest route between two points is a crooked line’, he wrote. Still, a hypersensitive Indian academic public latched on to the subtitle of the book, A Derivative Discourse?, ignored the question mark, and were offended because Partha Chatterjee seemed to be denying originality to Indian ‘nationalist thought’. A few years later, The Nation and its Fragments (1993) took a much more critical tone, examining the national idea in its interactions with various ‘fragments’ of the nation, who could be appropriated but could not fully belong: Dalits, women, or those planned for by the Planning Commission, for instance. The book began nevertheless with a polemical and analytical demolition of academic positions that sought to underplay the importance of imperialism in shaping Indian history, or that appeared to reduce India to perpetual consumers of modernity rather than its producers.

His next major book was a legal thriller which was a true story: A Princely Impostor? (2002) told the story of a sanyasi who was (or wasn’t) a zamindar who came back from the dead twelve years after his cremation. This story has resonances for contemporary India and particularly Bengal, where the spirit of impending return haunts the politics of Gumnami baba, a.k.a. ‘Netaji’, last sighted in Siliguri aged 117. 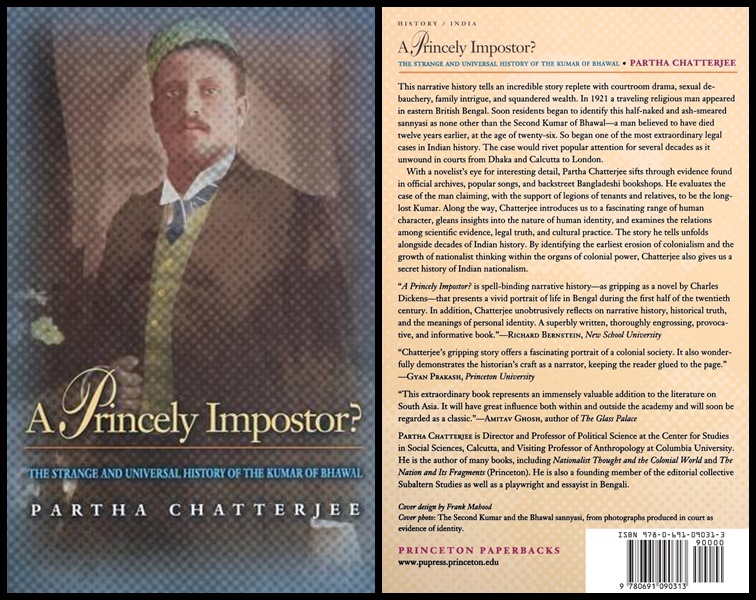 A Princely Impostor? By Partha Chatterjee.

Not all of Chatterjee’s arguments have, of course, made it to greater resonances. In The Politics of the Governed, Partha Chatterjee introduced a distinction between ‘civil society’, which is elite-led and organised, and ‘political society’, less formalised, unwieldy. It can be argued that he turns ‘civil society’, which was in Gramsci’s writing a residual category that was not the state, is subdivided to produce another residual category. His last book, The Black Hole of Empire follows the story of the Black Hole of Calcutta as event, myth or metaphor, even as physical monument memorialising the alleged originary event, providing in the process a narrative of the unfolding and unravelling of empire, moving on from that to larger justifications of empire and counter-arguments against the sustenance of empire. 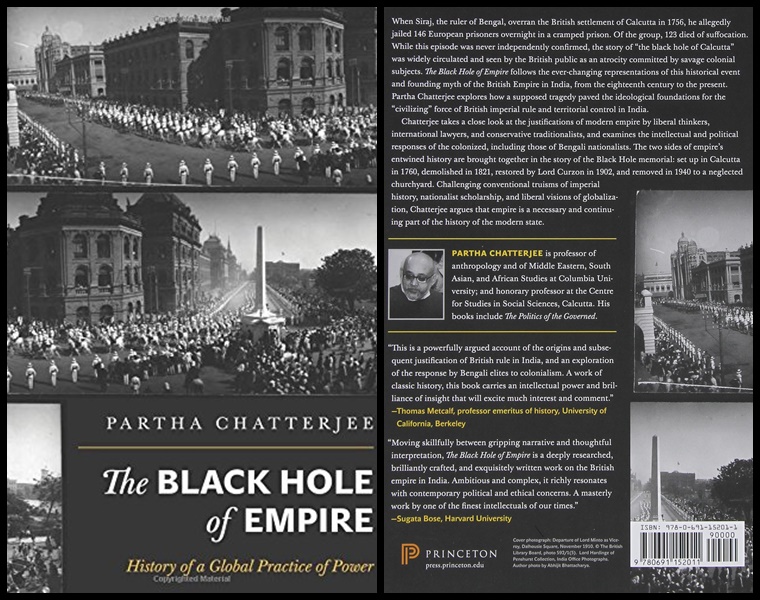 The Black Home of Empire by Partha Chatterjee.

In a world where it is customary to denounce writers as Marxists (by anti-Marxists) or not correctly Marxists (by Marxists), Partha Chatterjee belongs to a generation who can best be described as non-non-Marxists, non-party intellectuals who had a deep understanding of and an ability to think with Marxism without being strangled by the rigid rules of sclerotic apparatchiks. Those who were present or have seen the video recording will remember Partha Chatterjee’s very gentle demolition of the anti-Subaltern Studies self-proclaimed Marxist Vivek Chibber, who denounced Subaltern Studies for not telling a different story, in effect for not writing about what he wanted them to have written about, namely, world capitalism. Chatterjee was courteous but devastating in his erudition, demonstrating an understanding of the subtleties of Marxist theory that eluded his interlocutor, educated in Stalinist dialectics. (‘My Marxism is bigger than your Marxism’, was the paraphrase of Chibber’s position that a comrade offered, aptly enough.) Still, in Partha Chatterjee’s defence of one of his mentors, Ranajit Guha, one could not help but feeling that he had done a better job, and made Ranajitda seem a more sympathetic and theoretically more consistent intellectual than Guha himself might have achieved had he himself been called upon to defend his own honour or that of the Subaltern Studies group.

In the 1990s, as the Subaltern Studies group acrimoniously split, it had become fashionable to denounce ‘Postmodernism’ and ‘Postcolonialism’ as refusing to engage with the politics of the poor. A few broadsides were aimed at Partha Chatterjee for doing the same thing. He hadn’t. But he was used to raising uncomfortable questions and finding himself outside the legitimating consensus of his times. Before it had become important to understand the politics of an emerging Hindu right and its deeper histories, when ‘communalism’ was seen as a British invention and/or communal conflict seen as a displacement of class conflict because class and communal identities often overlapped, Parthada provocatively reversed the question: what if class was a displacement of communal conflict? That was certainly his interpretation of the politics of the Bengal countryside at the time of the rise of the Krishak Praja Party in the 1930s [Partha Chatterjee, Bengal 1920-1947: the Land Question, volume 1 (1984). (Volume 2 was never written)]. The Krishak Praja Party, claiming to stand for the interests of peasants and tenant farmers, was swallowed up by the Muslim League by the 1940s, adding the legitimacy of a ‘class’ dimension to the otherwise elite Muslim-led Pakistan movement, even as it was able to provisionally ally with the Communist Party of India in the Tebhaga Movement of sharecroppers.

In the hands of a lesser mortal this idea, never acknowledged properly as Chatterjee’s, would become an essentialist theory: the Third World was incapable of producing a ‘proper’ working class because, it being still not fully capitalist, it could only produce communally influenced partially proletarianised peasants. Parthada never read his political theorists as crudely, whether to support or denounce them. He argued, with those reading Antonio Gramsci in the English-speaking world after the 1971 appearance of selections in translation, that a ‘passive revolution’, where social change was engineered from above lest it be pushed from below instead with the consequent loss of control for the ruling class, was more the rule than the exception that Gramsci had made it out to be. The classical revolutionary pattern that was manifested in the French revolution, in which an old class was overthrown by a new one, was thus the exception that had acquired the status of the rule [Partha Chatterjee, ‘On Gramsci’s Fundamental Mistake’, Economic and Political Weekly 30 January 1988]. And in the course of this argument, he pointed to the unlovely irony of army regiments in independent India displaying trophies that dated from their suppression of various ‘rebellions’ against the state – which included its colonial predecessors. It is in the spirit of this last argument that his current intervention needs to be seen. Partha Chatterjee has long been a proponent of the view that the independent Indian state owed far too much of its institutional and legal existence to colonial precedents.

With the Sangh Parivar threatening physical aggression against dissenters of all kinds, even to the extent of murder, too many Indian intellectuals, and especially those who have been able to hide under cover of an upper-caste Hindu name, have self-censored to the point of disappearing: ‘inner exile’, the term that was used for a similar phenomenon in Nazi Germany, made sense in these terms as retreating altogether from one’s own conscience or any sense of public duty in the face of the fascist danger. In not doing the same, Partha Chatterjee comes across as a man of integrity, left-democratic commitments, and immense courage.

This article was originally published on Raiot. Read the original article.