What Happens to the 'Many' in BJP's India of 'One Nation, One Constitution’?

A hard unitary framework could cost the nation its invaluable diversity. There is a question currently confronting the plurality and federal structure of India. Photo: Crispin Semmens/Flickr (CC BY-SA 2.0)

Following the reading down of Article 370 of the constitution of India in the first week of August 2019, the Bharatiya Janata Party-led government has decided to launch an outreach programme across the country in September, to spread awareness about its decision.

Union minister for Jal Shakti, Gajendra Singh Shekhawat has remarked, “The outreach programme will focus on informing the people about the importance of the decision. The dream of ‘one nation, one constitution’ has been fulfilled by Prime Minister Narendra Modi.”

In this context, it would be pertinent to discuss the idea of India and its plurality envisioned by the constitution in letter and spirit.

The debates around Centre-state relations have been extensive ever since the late 1960s, through the 70s, culminating in the Sarkaria Commission of 1983, whose report continues to be widely referred and quoted. The trigger to these developments can be located in the difference in the tenor of the constituent assembly debates between pre-and post-Partition periods.

Also read: Neither Abrogated Nor Removed: The Ploy Behind Centre’s Article 370 Move 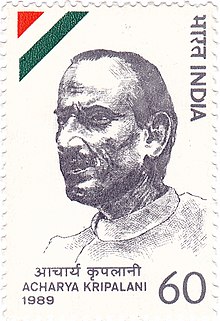 Kripalani on a 1989 stamp of India. Photo: Wikimedia Commons

For instance, in November 1946, at the 54th Annual Congress Session, the then president, J.B. Kriplani – a renowned Gandhian – spoke in favour of maximum autonomy to the states and regarded centralisation as inimical to liberty (Kriplani, 1948).  Such ideas around maximum autonomy to states took a hit in the post-Partition phase and safeguards were put in place within the constitution to ensure territorial integrity of the country.

Commenting on the emergency provisions contained in Article 365, which is one such safeguard, during the constituent assembly debates on November 15, 1949, Biswanath Das from Odisha remarked:

“Why is it that we want to look into the horrors of revolt of the states? That means failure of the president and the cabinet. If the states get out of control and try to revolt, then it would mean that there is not that cordial a relation between the government of the Union and the states, and anybody who is not a lawyer – even a layman like myself – when he reads this constitution which we are shaping, will see that it does not leave the provinces any power. The provinces are today glorified municipalities and corporations. If that be so, why go to the horrors of Article 365? We are not going to evolve a fascists´ democracy. We are going to evolve democracy. Why this fear? Why this suspicion?”

In other words, scholars have argued that the federal characteristics of the constitution are strong enough to let the states assert themselves only to the degree to which the Centre lets them. A majority government can go ahead to effect changes to a region even without the consensus of a given state.

The 1950s and 1960s saw instances of both confrontation and accommodation by the Centre, be it the events that transpired in 1953 in Jammu and Kashmir or the States Reorganisation Act (1956). On the other hand, the dominant party of the day, the Indian National Congress had a number of regional leaders who enjoyed considerable freedom and popularity.

Regional aspirations found expression steadily both in the formation of new states and in support from the Centre in according exemptions to them on specific matters. This process got a fillip after the defeat of Congress in six state elections in 1967. The ball was set in motion with the Rajamannar Committee constituted by the Dravida Munnetra Kazhagam, a party known to be an advocate of federal autonomy. The fall-out in the Indian National Congress and the Indira Gandhi-led government through the 1970s was marked by majoritarian tendencies. In response, this period also saw the emergence of regional leaders and parties who opposed these tendencies. Furthermore, the period saw a rich discussion around Centre-state relations, which also helped a lot of regional groups negotiate with the Centre for better autonomy and exemptions to help their interests.

Towards the 1990s, the coalition government led by V.P. Singh, was the coming of a time when the regional parties played a significant role in the formation of central governments. This electoral development provided a leverage for the parties from states with sub-national identities to negotiate their space within the larger framework. Moreover, the voices from sections within national parties who subscribed to a narrow idea of the nation at the cost of linguistic diversity and economic aspirations of states mellowed down.

The examples, Jammu and Kashmir, Telangana, and Nagaland to name a few, provide us with an array of decisions made by successive governments since Independence, revealing the pacifying influence provided by the empathetic hearing of demands or grievances of concerned sections of people.

Given the constitutional constraints discussed earlier, it can be argued that the negotiations from various regions were weighed only to a limited extent towards hard structural power relations or autonomy and more towards space for expression and conservation of their distinctiveness.

This in a way, makes the negotiation very personal to the people belonging to such identities or cultures. Therefore, creating a space for the democratic political class to put forward the interests of people and the subsequent accommodation of the same was necessary. Consequently, the diversity in thought and being thus found expression and evolved to become constituent elements of India.

Put otherwise, the exhibition of dissent against a dominant Centre while negotiating specific demands was not confronted with the tag of being anti-national. As a result, it helped with both quelling the spirit of secession and accommodating differences towards making an inclusive framework.

A telling example of such accommodation is Article 371. To site a few others, one could talk of Schedule 6 of the Constitution, policy on official language, and so on. This was possible because a large section of the political class of the period foregrounded the spirit of pluralism in the political realm and attempted to accommodate the same constitutionally too at varying degrees.

The question currently confronting the plurality and federal structure of India is: will a majority government push for a hard unitary framework by misusing the constitutional provisions and demonise its own people? With the cost being the nation’s invaluable diversity, it does not sound like a good prospect.

Vignesh Karthik K.R. is a doctoral student at the King’s India Institute, King’s College London. Jeyannathann Karunanithi is a political analyst based in Chennai.