Rather than deploying more forces to curb the ongoing crisis in Darjeeling, the state government should initiate dialogue with the protesting parties to find a middle ground. 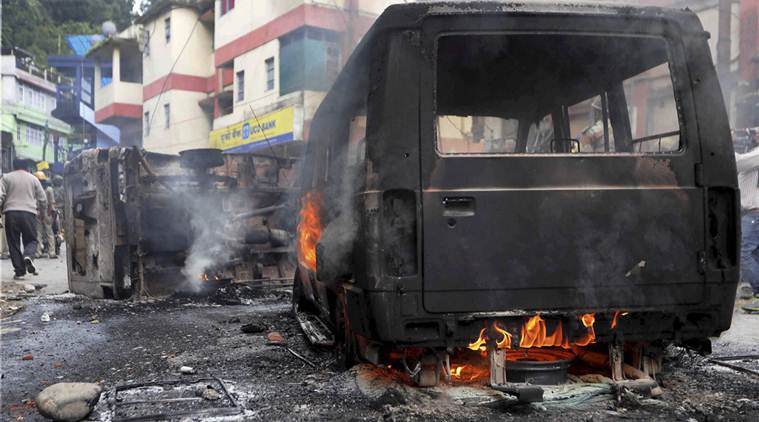 Darjeeling: Army Personnel patrol near burning vehicles after clashes with supporters of GJM in Darjeeling on Saturday. PTI Photo(PTI6_17_2017_000185A)

The recent unrest in the Darjeeling hills has come as a shock to the ordinary people of West Bengal and perhaps to the state government as well. Perhaps the Gorkha Janamukti Morcha (GJM) too was surprised at the massive support that its renewed call for Gorkhaland aroused. It is in the nature of politics that the more we believe a situation to be peaceful, the more the situation shows signs of torment and contention. West Bengal chief minister Mamata Banerjee, battle-hardened on the streets, knows this only too well. But power lulls a ruler, and politics has a habit of throwing up nasty surprises.

The Gorkhaland Territorial Administration (GTA) was formed in the Darjeeling hills as a result of the tripartite agreement signed by the GJM with the West Bengal and central governments on July 18, 2011. The GTA succeeded the Darjeeling Gorkha Hill Council in August 2012, through a West Bengal state Act. This was a political process, which required respect for the principle of autonomy and sagacity on the parts of the government as well as the Gorkha political movement. Yet it should not surprise us that within a few years, conflict again flared up between the government and the GJM.

After all, as various instances show, whether in Kashmir or in Nagaland, the principle of autonomy has nothing immovable, static or sacrosanct in it. Much of it is beyond the stated provisions in an agreement for autonomy, which often lacks any joint supervisory arrangement and custodianship of the agreement. In the Darjeeling hills disputes started in no time. The GJM wanted to expand the authority of the GTA, wanted more money, power and control of the hills, to the extent of disciplining and coercing others into submission. The government wanted more accountability, and to limit the hold of GJM and the GTA in the plains of Dooars and even in the hills. The GJM declared strikes and other agitating measures in this period. The government foiled or prevented them.

As the political process unfolded, it seemed that the GJM was losing ground as the government took up the policy of setting up development boards for various minority groups in the hills such as the Lepchas, which the GJM opposed. This was seen as an attempt to split the people of the region along ethnic lines, though it was conveniently forgotten by the GJM that the Gorkha movement itself was an ethnic movement, besides also being a movement for territorial autonomy.

The government’s development policies in the hills were seen as interference in the work of the GTA. The chief minister’s frequent visits to the hills were declared as unwelcome by the GJM. The chief minister, the GJM alleged, came only to foment trouble. The government took no notice of such signals. It never understood that proximity of ruler and ruled is not always good, and the latter may feel threatened. A bear hug may be considered a death embrace. In any case, the political process opened up new conflicts. Politics in the hills from now on could not but be contentious.

Development boards were set up. A new district, Kalimpong, was carved out in the hills. The ruling party, the Trinamool Congress (TMC), opened its offices, contesting and winning the Mirik municipality seat. Meanwhile, it managed to wean away from the GJM some of its active members, such the erstwhile Kalimpong MLA, Harka Bahadur Chetri. Moderates lost their space. Either you belonged to the TMC or the GJM. The middle ground, by definition, occupying the middle position and thus fragile, was corroded in the process. The TMC and the government, elated at the increase of the vote share of the TMC in the civic elections, forgot that retaining the middle ground was crucial in any attrition battle, for when the battle started in earnest, there was no middle space to cushion the effect of the full fury of aggression.

Complacent with the success of its advance, the government overplayed its hand. It did three unnecessary things – it suddenly declared that Bengali, as the language of West Bengal, was to be made compulsory in all schools. Second, it decided to hold a cabinet meeting in Darjeeling. Third, it ordered a special audit of the GTA. Meanwhile, the term of the GTA was to end in June, with fresh elections to be held in July. The special audit could have been held earlier. In fact, for the last five years, the government had remained silent. As for the second step, there was no need to bring the whole government in Darjeeling in the face of a sulking adversary. But the first step was most erroneous.

If Bengali was to be an optional language (third or fourth language), then there was no need for this sudden declaration by the chief minister that it had to be compulsorily taught in schools. After all, it was an issue of concern not only for the Nepali speaking Gorkhas, but all other linguistic minority groups like the Santhals, who had struggled for long for the right to be educated in Santhali and the al chiki script. Caution, wide consultations and prudence were needed, as is always the case, for a language policy. The least the government could have done was not to announce such a policy in a cavalier manner from an administrative meeting without preparation and seriousness.

Pitfalls of administration in fiat mode

It is in the nature of a government focused on executing welfare projects and certain development measures to run the administration in a mai bap sarkar manner – that is, without dialogue and consultation. Issuing fiats becomes the style. The district administrative meetings become imperial courts, where the officials are summoned, heard, praised or dismissed. They are effective, but only up to a point. They become occasions for the sudden declaration of policies. Such a mode of governing soon shows its limits. This is what happened when the chief minister suddenly declared that in the interest of a peaceful academic atmosphere, rallies and demonstrations on College street in Kolkata would henceforth be banned. Again, on such an issue, which evokes long memories, the intended step could have been taken in a different way, perhaps only partially taken, but through consultations with the educational community at large. In short, the fiat mode of administration had to backfire sooner rather than later.

One day, of course, the unrest in the hills will die down. But at what cost, and with what damage to the government’s legitimacy and to the space for politics in the hills of Darjeeling? Has the government learnt its lesson about maintaining a dialogue mode of governance and nurturing a middle ground?

By now of course, everyone is speaking of the necessity of dialogue. But for the government, the question is how to make the opposition in the hills agree to a dialogue. For this, not only does the state government have to first make up its mind about whether it wants to sincerely take the path of talks, but also on how to de-escalate the situation gradually, so that talks become easier and the opposition finds it difficult to refuse to talk. Invariably, however, the issue of preconditions will arise, as they do in any peace talk. Will the government insist on calling off the general strike in the hills as a precondition for the talks? Or will the GJM insist on the withdrawal of police forces, in particular, the central forces, as a precondition?

The government will have to find intermediaries, all of whom have probably gone to the side of the opposition in the hills. In any case, de-escalation of the situation will be the prime task. The work of the government or the state, if it wants to restore peace and normalise the political process, is always more difficult in such situations. The onus is on the government to walk the extra mile, because it claims to represent the people of the state. The government has to win back the legitimacy it has lost. Similarities with other such cases of civil conflict and this one are striking. These similarities should make the government humble, cautious, and prudent – as Yassir Arafat used to say, “peace of the brave”.

Second, if the government thinks that deploying more forces will help the it come out of such a deadlock, it is mistaken. Recall how the deployment of more and more paramilitary forces in the Darjeeling hills by the Jyoti Basu government during the unrest in the 1980s had antagonised the common people there. The presence of paramilitary forces only terrorised the people. From then on, it was a downhill journey for the government.

The West Bengal government today may come out of the deadlock with the help of paramilitary forces and the army, and with the political assistance of the Central government. But in the long run, this may make it dependent on lifelines thrown its way by the Centre. The political price for this is not likely to be a small one.

The most crucial thing is that if the TMC government wants to counter the hard stance or aggression of the adversary in the hills, it must depend on the political support base that it has created there, if at all it has been created, or is still intact. Even in Siliguri, one can notice the absence of any popular mobilisation for peace in the hills. To return to peace, the emphasis on the police, administrative methods and rule by fiat, must go, and political mobilisation must become the preferred way. The government is avoiding both these options, and biding time, hoping perhaps that the worst is over.

Perhaps the worst is over, but the question to remember is – what was the cost of it? What lessons did we learn, or more importantly, what lessons did the government learn? Populism is good at times, but we must be aware of its limitations. When populism over-stretches itself to the point of being clever and short sighted, it thins out. The fault lines of society then expose themselves ruthlessly.