In addition, delays within the Central government meant notices about implementing the UN campaign were sent out weeks after it had officially ended.

New Delhi: How complicated is it to implement a 16-day awareness campaign against gender-based violence? Near impossible, if the record of the Union Ministry of Women and Child Development is anything to go by.

Between November 25 and December 10, the United Nations launched ‘UNiTE’, to tackle reports of rising domestic violence during the coronavirus outbreak that has forced people to spend more time at home. UNiTE was the 2020 edition of an annual campaign called ‘16 Days of Activism against Gender-Based Violence‘.

The Union women and child development (WCD) ministry decided to add its own voice to the UN campaign, and build awareness in educational institutions against gender-based violence. The ministry, however, decided it needed to make one crucial change – remove the word ‘activism’ from the campaign entirely.

In a letter dated December 4 (a good nine days after the UN campaign had already begun), Ram Mohan Mishra, secretary in the WCD ministry, wrote to his counterpart in the Department of Higher Education, Amit Khare. “As you may be aware the period from 25th November, 2020 (International Day for the Elimination of Violence Against Women) to 10th December (Human Rights Day) is observed throughout the world as 16 days of Activism for ending gender based violence by the Civil Society Organisations; that has also been supported by the UN Secretary General. The Ministry of Women and Child Development has decided to leverage this period for conducting ‘Awareness campaign for eliminating gender based violence’ without using the term “Activism”,” Mishra’s letter says. 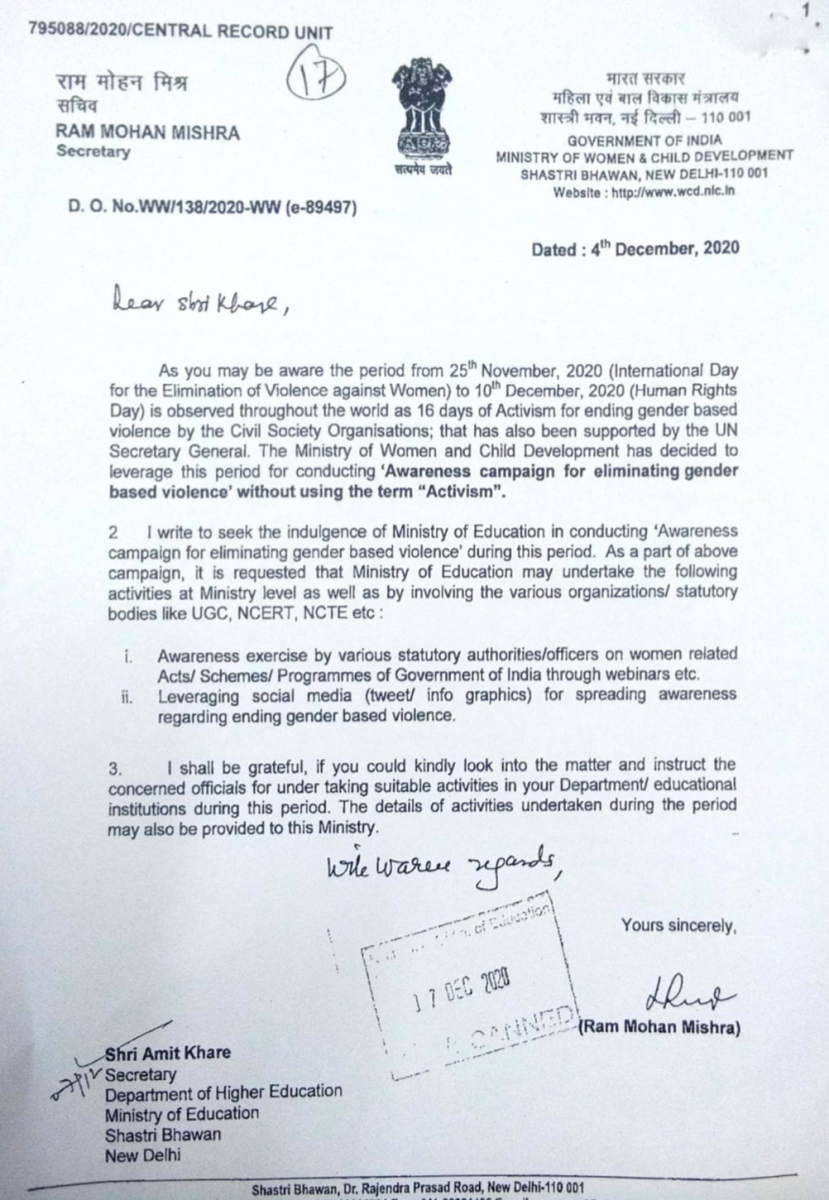 As a part of this campaign, Mishra said, statutory authorities and officers could raise awareness on the government’s schemes for women, and also use social media to propagate messaging on the issue. He did not, however, explain what his issue with the term ‘activism’ is, and why he felt it necessary not to use it. Mishra also did not address the fact that the 15-day period was already nearing its end when his letter was sent.

The Wire called Mishra’s office to ask for an explanation on why the term ‘activism’ was deemed unworthy, but was told he is not available. An email has also been sent to the secretary asking for his reasons, and this article will be updated whenever he responds.

By the time the Ministry of Education acted on Mishra’s letter, another six days had passed and the 15-day campaign window was officially over. Yet the office memorandum of December 11 contains the same dates, and forwards Mishra’s message to other concerned officials – including the part about not using the term ‘activism’.

Another 15 days pass, and December 28 arrives. The UN’s 16-day campaign has now been over for more than two weeks. The Union government, though, is just getting warmed up. B.N. Awasthi, assistant section officer in the Department of Higher Education, emails the vice-chancellors and registrars of all the central universities, informing them about the “16-day” campaign while reiterating Mishra’s comment on avoiding ‘activism’. The universities are also asked to respond to Awasthi with an action taken report “urgently”.

While official notifications were pushed between ministries and then to universities, did the campaign take off? The ministry is yet to respond to The Wire‘s request for comment, but one telling factor is the women and child development minister’s own social media handles. Smriti Irani has a large follower base on Twitter, with 11.4 million followers as of January 6. Her handle, then, is probably a useful tool for spreading awareness. Within the stipulated 15-day period, however, she did not bring up the campaign against gender violence even once – with or without the mention of ‘activism’. Some of the issues she did tweet about in this period include the Jammu and Kashmir District Development Council polls, the Centre’s contentious farm laws and the new parliament building being developed under the Central Vista project.

The UN and its secretary general, Antonio Guterres, were hoping that the 16-day campaign would lead to “global actions to increase awareness, galvanise advocacy efforts, and share knowledge and innovations”. Under the WCD ministry’s watch, though, what it got was three identical official notifications, three reiterations on how the word ‘activism’ must be avoided for reasons unknown, and probably a group of confused university administrators who are wondering how to turn the clock back to November 25, 2020, as directed.

Unless they use it as advance notice for when the UN campaign comes around again in November 2021.