In Madhya Pradesh, the whistleblowers of the Vyapam scam are aligning themselves with the Congress, with the hope that a new state government will make more progress. 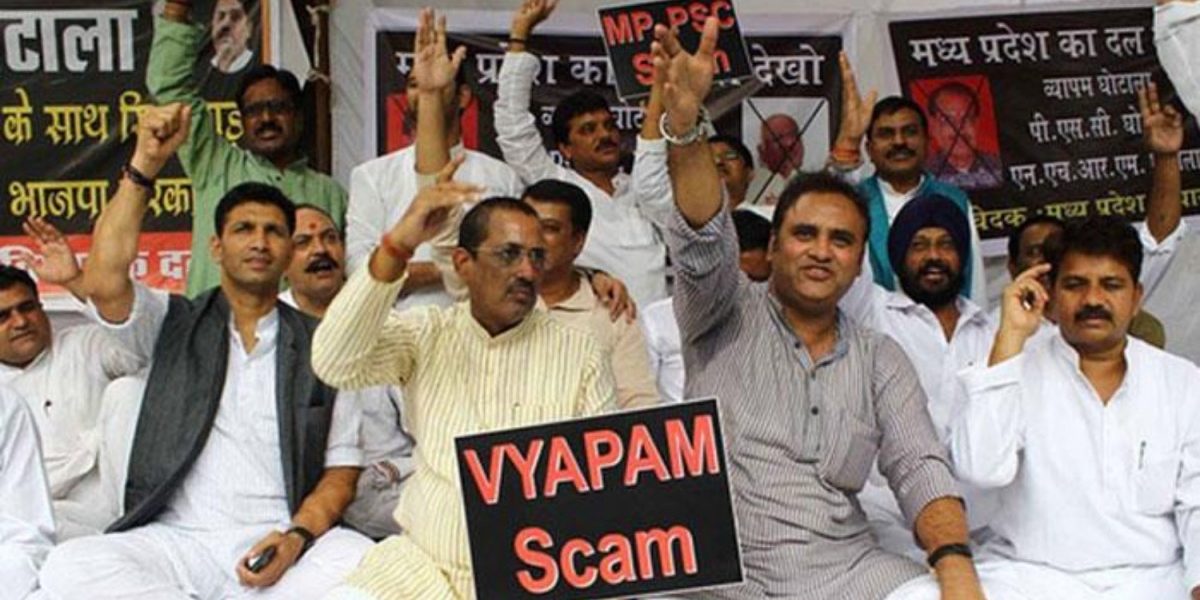 New Delhi: As Madhya Pradesh heads into its first major election since the the Vyapam scam was unearthed, whistleblowers are hopeful that it will cast a shadow on the incumbent BJP government of Shivraj Singh Chouhan. But while they want the current government gone, they aren’t all that happy about Congress’s dalliance with some of the accused in the scam either.

Vyapam – the entrance examination, admission and recruitment scam – shocked the state and the country. Vyapam is an acronym for the state “Vyavsayik Pariksha Mandal”, a set of 13 examinations, for which over three million students appear each year. The scam concerned imposters appearing as proxies for candidates, and forged answer sheets supplied by officials in exchange for bribes.

Over 2,000 people, including a state cabinet minister, MLAs and several high ranking officials, were booked or arrested in connection with the case by 2015. Early arrests were made by a Special Task Force. In July 2015, the Supreme Court handed over the case to the Central Bureau of Investigation.

Before long, however, people linked with the case – accused, witnesses, and others – started to die in mysterious circumstances. About 52 deaths have been noted. As whistleblowers began to fall, it became increasingly clear that deadly machinations were at work.

Whistleblowers are now hoping that justice will arrive along with the upcoming elections. Social media has emerged as a key platform on which they can share the stories of how they’ve been affected by the Vyapam scam.

Ashish Kumar Chaturvedi, who sought to expose the scam through numerous RTI pleas, told The Wire, that he had been attacked several times and threatened in the presence of police officers. However, he remains undeterred and continues his endeavour to educate people about Vyapam through social media.

“Vyapam is a big issue among the youth, the educated, doctors and those who follow such developments,” he said. “They will evaluate and vote on these issues. But […] such educated and well-heeled people usually record a lower turnout. So the emphasis is on getting them to exercise their franchise. It would impact the election in a big way.”

‘Vyapam’ is the most searched word on the web in MP

Chaturvedi is right.  Social media and the internet are crucial, and most people have learnt about the scam online. In 2015, Vyapam’s Wikipedia page had ranked as its 19th most searched globally.

A recent analysis found that it was still the most searched term in Madhya Pradesh. There were between ten lakh and one crore searches for “Vyapam” in a month – surpassing search statistics for political personalities, caste-related issues and issues like farmer distress or corruption in the state.

‘BJP taking the corrupt along; has nexus with the mafia’

Chaturvedi, who lives in Gwalior, is clear that “the BJP is taking corrupt people along and it has a nexus with the mafia. It is with the help of this mafia that it wants to win this election”. He mentioned how the party has given a ticket to the son of its former minister, Laxmikant Sharma, an accused in the Vyapam case.

On the other hand, Chaturvedi said that even though some Congress leaders had inducted an accused MLA – Gulab Singh Kirar – into the party, Rahul Gandhi intervened to have him removed. (Chaturvedi has also FIRs filed against Kirar and his son.)

This episode led to some embarrassment for the Congress. Kirar had been expelled by the BJP three years ago when the CBI named him and his son in an FIR. They were accused of irregularities in the entrance exam for post-graduate courses in medicine in 2011. In spite of this, on October 31, he was taken into the Congress fold in the presence of party president Rahul Gandhi and top state leaders.

The Congress reversed its decision the following day. Party spokesperson Shobha Oza even denied that he had joined “officially”. However, Kirar claimed that he will continue to work for the Congress regardless.

Congress is also facing flak for giving a ticket to another Vyapam accused, MLA Phundelal Singh Marko from Pushprajgarh. Marko had defeated two-time BJP MLA Sudama Singh in 2013, despite a BJP wave at the time.

In defence of its decision, Congress state vice-president for media, Bhupendra Gupta was recently quoted as saying: “Marko was made an accused by STF but he is not an accused on the CBI list.” Even so, he added, “the case is sub judice and he can’t be judged guilty at this point of time”.

This disappointed some whistleblowers. Chaturvedi insisted that both Marko and his son were named as accused by the STF. They did not receive a clean chit even when the the CBI took over the probe in July 2015.

The RTI activist also wondered why the Congress had not released its manifesto yet as that would have equipped its followers with more ammunition to attack the BJP with.

“Only about a fortnight remains before the state goes to polls on November 28. So, when will people read and analyse the manifesto?” he asked. “Ordinary people may not even get to know what [Congress] has to say about Vyapam.”

Chaturvedi is also hoping that other parties, like Aam Aadmi Party, which have thus far been silent on the issue, eventually speak about it.

‘Congress should take a proper position on Vyapam’

Prashant Pandey, from Indore, had been hired as an IT consultant by the Special Task Force (STF) while investigating the scam. He is not happy, however, with the Congress walking on eggshells about discussing those accused in the scam.

Pandey also received death threats while dealing with the case. He said, “I always wanted the Congress, which had supported us, to take a proper position on Vyapam in this political scenario”.

But with the Congress briefly inducting Kirar and then chief minister Chouhan’s brother-in-law, Sanjay Singh Masani, he wondered how much the issue would be pursued. Masani has since been fielded by the party from Waraseoni in Balaghat district.

‘Vyapam is a big issue, it cannot be ignored’

Pandey, who moved to Delhi three years ago, said he has been in regular touch with leaders from all political parties, including Arvind Kejriwal and many other from the BJP who want the truth to be revealed.

As of now, Pandey said, while he was a little disappointed with the Congress’s approach, he and other activists were pursuing the Vyapam issue with equal zeal. “We are taking up the Vyapam issue both, on social media and in the courts as well. Once the tickets are announced, we are sure it will be taken up. It is a huge issue and cannot be ignored”.