The National Green Tribunal has directed LG Polymers India to deposit an initial amount of Rs 50 crore for the damage caused. 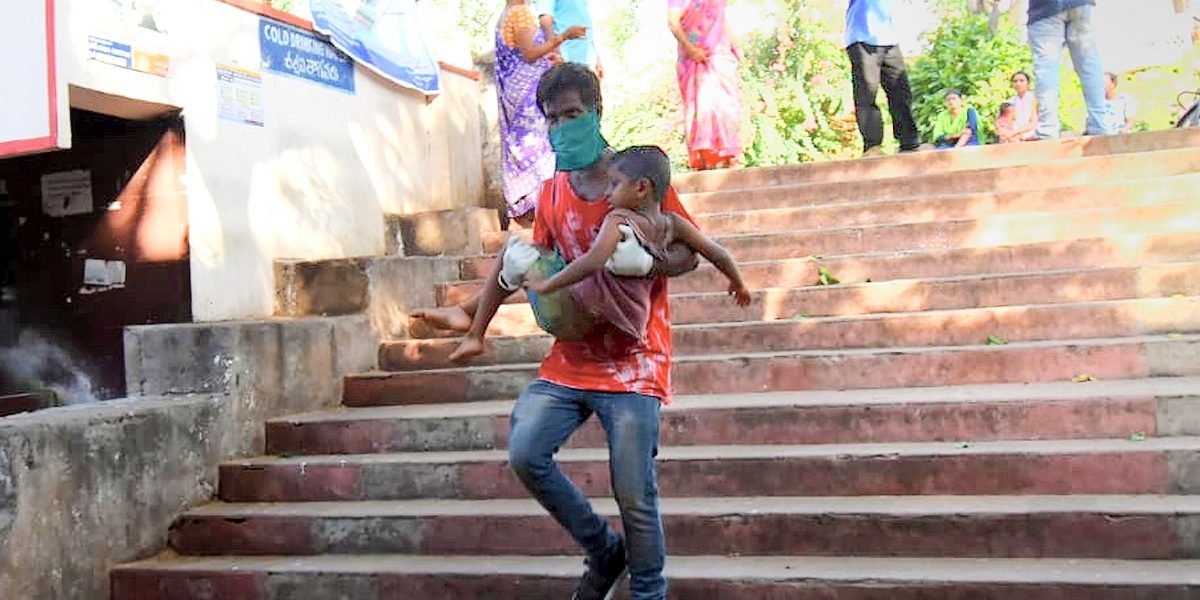 A man rushes his child for treatment at King George Hospital after a major chemical gas leakage at LG Polymers industry in Visakhapatnam, May 07, 2020. Photo: PTI

Mumbai: Sometime before dawn on May 7, a toxic gas – thought to be styrene – leaked from the storage unit of a plastics-manufacturing plant in Visakhapatnam, quickly rendering people around the plant unconscious, and eventually killed 11 people and injured a few thousand. Now, it seems that for a substantial period between 1997 and 2019, the unit, operated by LG Polymers India, did not have the requisite essential environmental clearance to do so.

According to Indian Express, which has accessed documents submitted to the Andhra Pradesh Environment Impact Assessment Authority (SEIAA; ‘s’ for state), the company admitted that as of May 10, 2019, the unit did not have a “valid environmental clearance substantiating the produced quantity, issued by the competent authority for continuing operations”.

LG Polymers had purchased the plant from McDowell & Company in 1997. To expand their operations, the company had applied for an environmental clearance for the plant from the Andhra Pradesh Pollution Control Board in May 2019. According to the application, the company wanted to up its production capacity of polystyrene from 415 to 655 tonnes per day. The unit also reprocessed primary plastics into engineering plastics.

This plan of expansion was classified as a ‘Category A’ project, for which a “prior environment clearance” from the Union environment ministry was required. However, in May 2019, the company still went ahead to file for clearance with the Andhra Pradesh SEIAA; the latter transferred the proposal to the Centre, according to Indian Express. In that application, the company had undertaken that it would not “repeat any such violation in future”.

A possible reason for the May 7 leak accident is that the plant may not have stored styrene gas at the right temperature, causing pressure to build up within the chamber, followed by a valve failure and then leak. The plant had been shut for over a month because of the national lockdown.

Even as the investigation in underway, the National Green Tribunal (NGT) reportedly took suo motu cognisance of the gas leak incident and on May 8 directed LG Polymers India to deposit an initial amount of Rs 50 crore for the damage caused. (Read NGT’s full order here.)

The tribunal also constituted a six-member committee headed by Justice B. Seshasayana Reddy, a former judge of the Andhra Pradesh high court, tasked to find the exact sequence of events leading up to the leak, including the cause of failure; persons and authorities responsible; extent of damage to life, public health, and environment; steps taken to compensate victims and restitute damaged property; etc.