In UP's Deoria, an Unfinished Building Symbolises Shattered Dreams for the Young

An Industrial Training Institute has been under construction in Bhavani Chhapar village for the last seven years. Young men who once dreamt of studying here now hope it will be ready in time for their children. 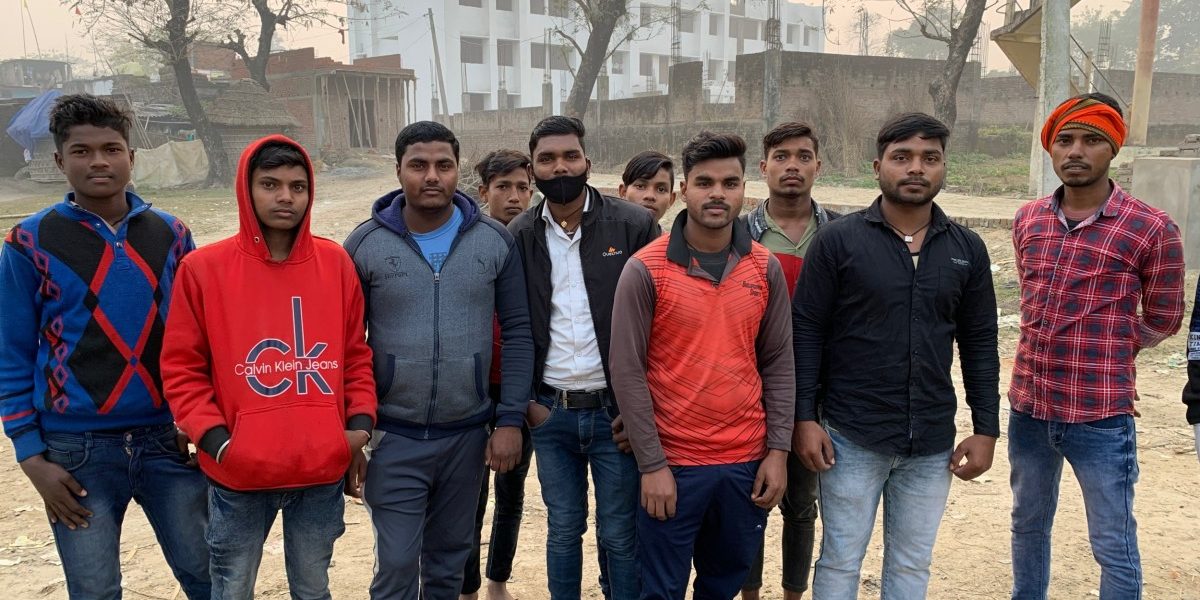 Young men from the village gathered outside the unfinished building. Photo: Manoj Singh

Deoria (Uttar Pradesh): “I don’t think we will see any development in our village in this lifetime. We can only hope for better days for our children. We don’t have any dreams left now. The only dream is to move to a city, find some labour work and earn daily wages,” says Ranjit Sahni, a 22-year-old resident of Bhavani Chhapar village located 40 km from the Deoria district headquarters in Uttar Pradesh.

Sahni is among a group of young men gathered outside the premises of an Industrial Training Institute (ITI) in the village, which has been under construction for the last seven years.

The Mallahi tola of Bhavani Chhapar village in Deoria’s Bhatpar Rani assembly constituency has a dominant Nishad population, except five houses which belong to the Rajbhar community.

The foundation stone of the ITI was laid on May 12, 2014 by then UP chief minister Akhilesh Yadav and the village youth had hoped that they would be able to find jobs after studying at the government-run institute. But seven years later, the building is still incomplete. The construction work further slowed down after the BJP came to power in the state in 2017, despite the party’s tall claims of setting up modern skill development centres in every tehsil. However, the ITI building, which has neither windows nor electrical fittings, is being painted and renovated as the poll dates approach. The workshops in the building are also incomplete. 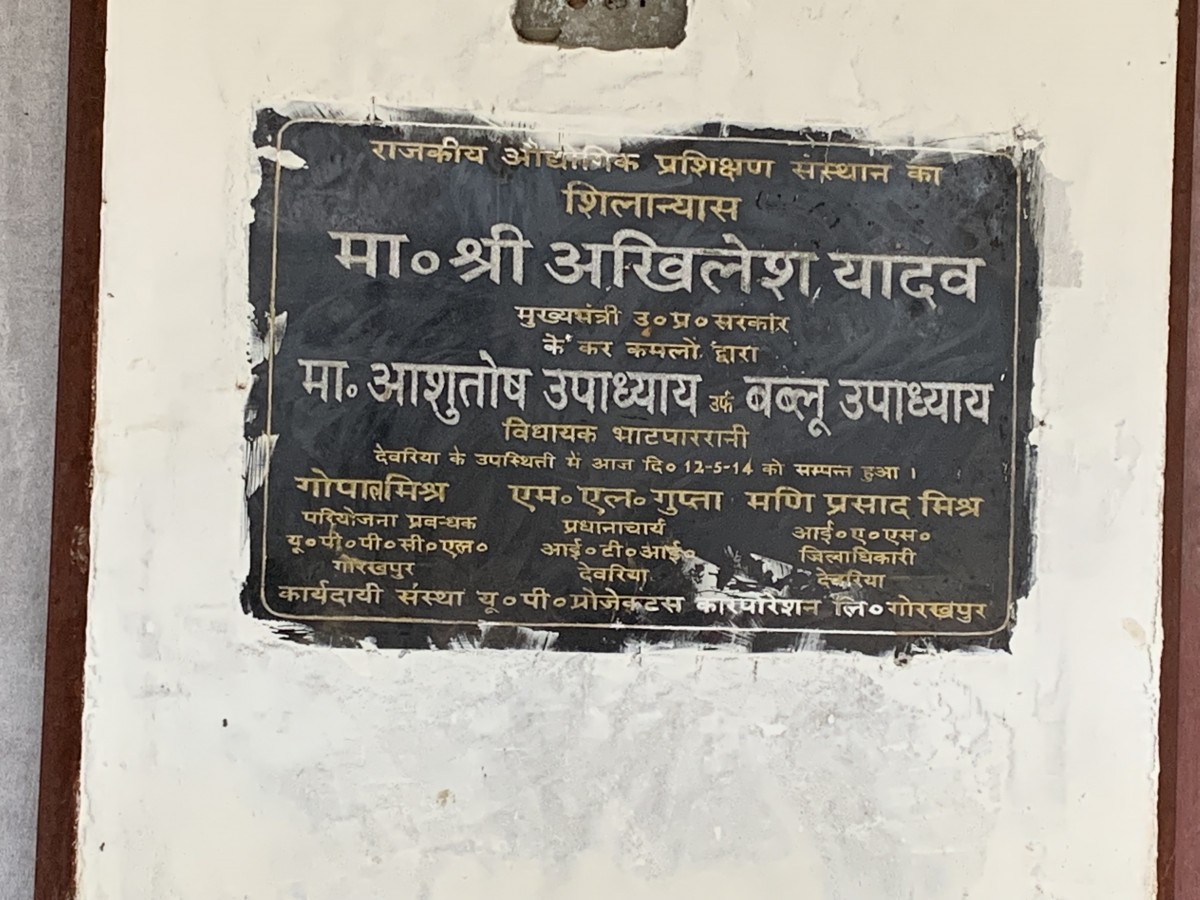 When the construction of the ITI began, Ranjit Sahni had just passed class 12. He had planned to enrol in the institute once it became functional and hoped to find a reasonable job outside the district after getting an ITI degree. But his dream has been shattered; years later, the village still has no ITI. Sahni eventually moved to Tamil Nadu to work as a labourer – a job he lost after the lockdown. Unemployed, he is now back in the village.

Many other young men in the village are doing odd jobs in Delhi and Punjab. One of them, Ajit Sahni, works in a Delhi-based ply manufacturing company.

Another local resident, Durgesh Sahni, had to pay a hefty fee of Rs 30,000 to get enrolled in a private ITI at Bhatni in Deoria for a two-year course, in addition to paying daily conveyance charges. He has his final exams towards the end of February this year.

Durgesh says that he was in class 8 when the construction began. He had hoped that by the time he completed class 10, the building would be ready and he could study here. A government-run ITI in the village would have allowed him to earn a degree in exchange for a nominal sum, and without travelling long distances. He says that his father, a labourer, faced a lot of hardship to bear the expenses of his education at a private ITI.

If Durgesh had studied at the government ITI, he would have to pay only Rs 40 per month, that is less than Rs 2,000 per annum. But in the absence of such an institute, he was forced to pay Rs 30,000 for the same duration of the course at a private institute.

Durgesh says that he will look for a job once he finishes his studies, but the prospect of finding one in the current unemployment crisis is daunting. 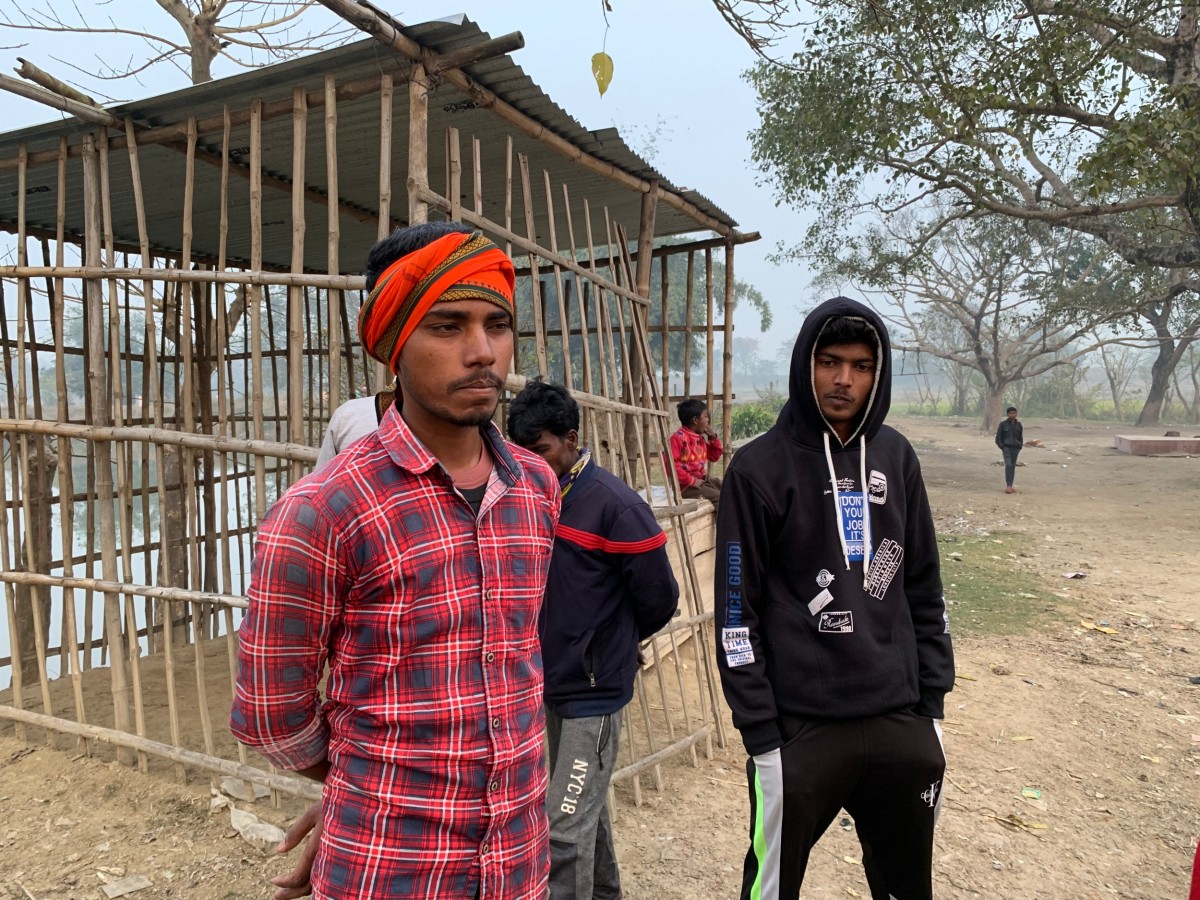 Interestingly, the admission procedure for Bhavani Chhapar’s ITI began in 2019, when the building was still under construction. As a result, the enrolled students had to travel 40 km to attend classes. The only student from the village, Vipin Kumar Sahni, got enrolled in 2019 to learn the welding trade. He spends about Rs 100 on his daily commute to Deoria.

The Samajwadi Party MLA from Bhatpar Rani assembly constituency, Ashutosh Upadhyay, says that the BJP government did not release the funds required to facilitate the construction of the ITI. So far, only 70% of the work has been completed. At the time of laying the foundation stone, the Samajwadi Party government had disbursed 50% of the budget for the ITI, but the work could not be completed due to non-availability of funds in the next five years. Upadhyay alleges that the BJP government did not support the ITI construction in his area because he was an MLA from the opposition party. The construction work from a stadium in Mahua Bari village in his constituency is also sluggish.

Upadhyay has been an MLA twice from Bhatpar Rani, which lies on the UP-Bihar border. He is contesting as an SP candidate once again. Upadhyay’s father, Kameshwar Upadhyay, was a five-time MLA from the area and the minister for rural development, sports and youth welfare in the Akhilesh Yadav government.

The assembly constituency has a dominant population of the Koiri (Kushwaha) caste, with a significant presence of Brahmin, Yadav, Nishad and Rajbhar castes.

Also read: UP’s Communalism Is Not a Singular Story. Here’s Why That Matters in This Election

There are seven assembly constituencies in Deoria district and polling will be held in the sixth phase on March 3.

In the previous assembly elections, the BJP had bagged six out of seven seats in the district. The only seat it lost was Bhatpar Rani, where the SP won.

There are six government ITIs in Deoria district, which has a population of more than 31 lakh as per the 2011 census. These include the above-cited ITI in Bhavani Chapar and ones in Barhaj, Deoria, Baitalpur, Gauri Bazar and Salempur. After Bhavani Chhapar, an ITI was approved in Barhaj in 2016, which is now functional and classes commenced here two years ago. There are 28 private ITIs in the district where 10th and 12th pass students are offered training in engineering and non-engineering trades. At present, 71 engineering and 39 non-engineering courses are being conducted in government and private ITIs across UP.

No new ITI has been constructed in Deoria since the BJP came to power.

Shobhnath, the principal of the ITI in Deoria and nodal officer of all the six ITIs of the district, says that the construction of Bhavani Chhapar ITI has been delayed due to non-availability of funds. “For two years the work remained suspended. Now that funds have been released, work has resumed. Four workshops are proposed to be built here. The academic session of the ITI started from 2019. Four teachers have been appointed and students have been enrolled,” he says.

According to Shobhnath, the students in the area are aware of the significance of ITIs and seek admission in large numbers. The construction of an ITI in the area will greatly benefit the students here, he says. 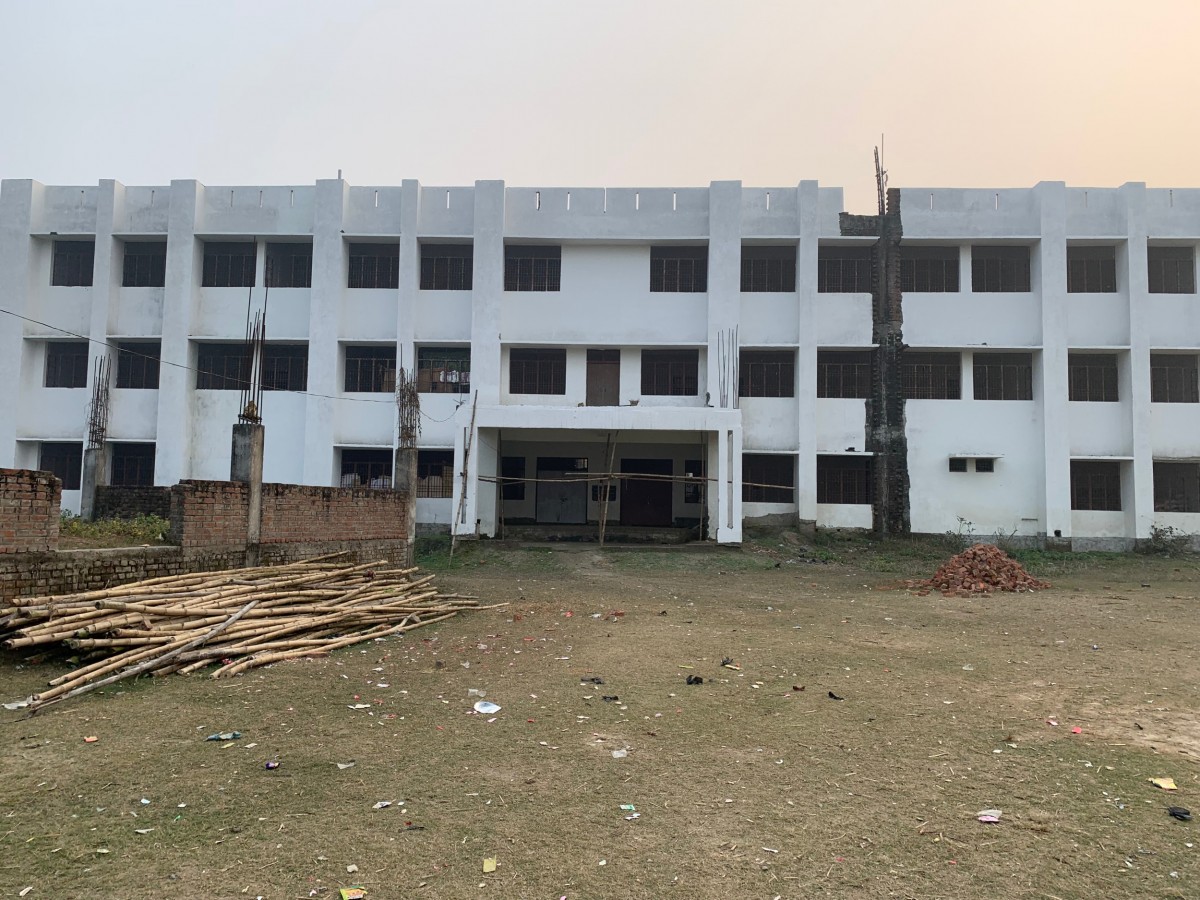 The BJP had made a slew of promises targeting the youth in its 2017 election manifesto. The BJP alleged in the Lok Sankalp Patra that the 15-year rule of the SP and BSP had brought the state to the brink of collapse and young people were forced to migrate. The party also claimed that the SP government had proven to be a complete failure in the field of education as well as skill development. In the manifesto, the BJP promised to create employment opportunities for the youth if voted to power and promised that development will reach new heights in the area.

Some of the many promises of the BJP were guaranteeing 70 lakh employment and self-employment opportunities in five years, starting recruitment processes on all vacant posts within 90 days, giving free skill development training to one member of every household, establishing modern skill development centres in each tehsil, and granting laptops to students enrolling in courses in IT, BPO, logistics, hospitality and tourism sectors along with 1 GB internet data. The party also promised that 10 new international universities would be set up, an engineering or polytechnic college would be established in every district and free Wi-Fi would be provided in all colleges and universities.

While the BJP failed to fulfil most of these promises, the Lok Kalyan Sankalp Patra released for the 2022 election attempts to cover up the failures of the Yogi Adityanath government on the issue of employment and education. Despite failing to set up a single international level university in five years, the state government in its manifesto has again promised to establish at least one such university in every circle. Along with this, the party promises to start the Vishwakarma Technological Up-gradation Programme at an expenditure of Rs 2,500 crore, and establish an ITI in every block for vocational training. It also claims that the Adityanath government has provided government jobs to five lakh youth without any discrimination in five years, granted contractual jobs to three lakh youth, renovated 1.4 lakh government schools and created employment or self-employment opportunities for more than three crore people.

According to the SP, 11 lakh government posts are vacant in the state and appointments will be made to them if the party is voted to power.

The Congress has also alleged that unemployment has increased five times in the last five years – tripled at the secondary education level, quadrupled at higher secondary education level, and jumped from 21% to 51% at graduation level and from 13% to 66% among youth who have obtained technical diploma certificates. Unemployment among technical graduates has increased from 19% to 46%, it said. The Congress has guaranteed 20 lakh government jobs to the youth in the state.

Ranjeet Sahni says that unemployment is a major poll issue. “After completing their intermediate studies, the village youth are forced to migrate to places like Delhi, Mumbai and Gujarat to find work. In the absence of employment, they are forced to do odd jobs like washing utensils at weddings for Rs 200-250. Ever since the lockdown, people can no longer find even such menial jobs. I have six people in my family. Tell me how I can feed them. We don’t even have any agricultural land. Some people are cultivating leased land. It’s time for another election now. We want people to vote on issues like unemployment and poverty, but the people of the village often vote for the popular party. We have six votes in the house. Other boys in our batch will vote on their own accord.”