As SC Sides With UP Govt, People Continue to Suffer From COVID-19 Crisis

The Allahabad high court had raised a number of critical issues – issues that a responsible government should have taken note of and tackled. 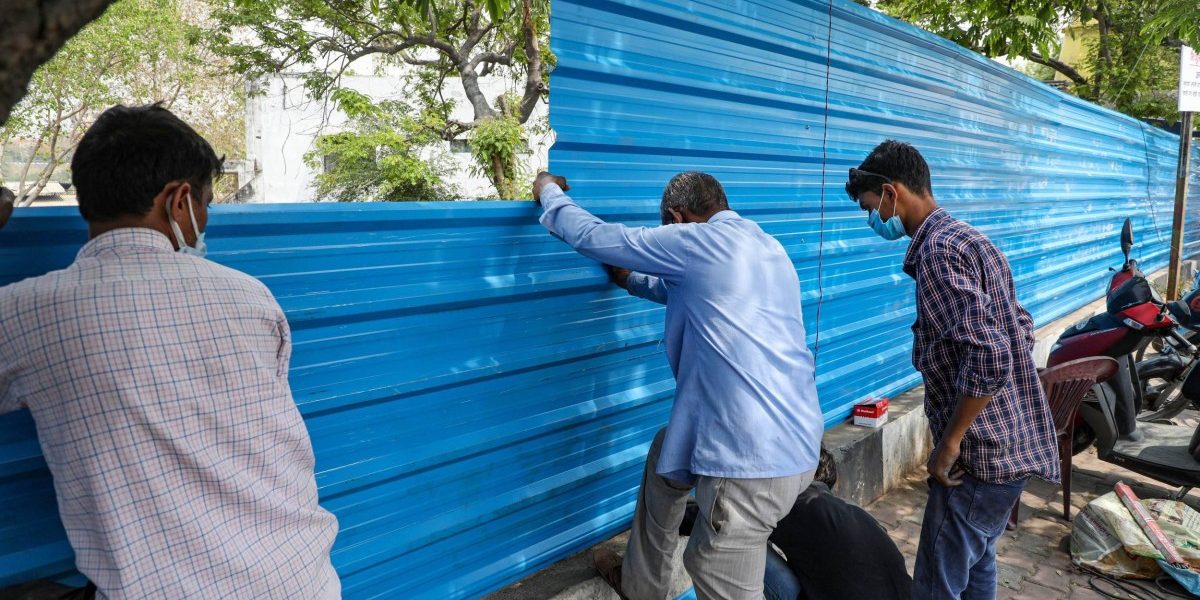 The Bhaisakund crematorium in Lucknow being covered with blue tin sheets on Thursday after its photo and videos showing a number of dead bodies burning went viral on social media, in Lucknow, April 15, 2021. Photo: PTI

Lucknow: It was no surprise when the Supreme Court on Tuesday summarily stayed Monday’s Allahabad high court direction for a week-long lockdown in the five worst-hit cities of Uttar Pradesh.

But has the stay brought any respite to thousands of people who are hopelessly struggling to fight the deadly COVID-19 virus that is threatening their lives? Evidently, there is precious little that the apex court’s order has done to alleviate common people of their sufferings.

With as many as 29,754 fresh cases reported on Tuesday, the total number of active cases rose to 2.23 lakh. The official death toll stood at 10,159, but municipal records show it to be substantially higher.

While the high court had castigated the state administration for its failure to provide adequate sample testing facilities, beds in hospitals or availability of oxygen, the obvious fudging of death toll figures had apparently not been brought to the bench’s notice.

Meanwhile, the Supreme Court felt that the high court had exceeded its jurisdiction by delving into issues related to policy matters of a government, which was the exclusive purview of the state legislature and the executive.

Surely that gives rise to the question – was it the first time that a high court had crossed such a threshold?

Sure enough, the high court bench comprising Justice Siddharth Verma and Justice Ajit Kumar was not oblivious to this fact. At the very outset, the bench had observed, “We know that putting a lockdown to public activities is a matter purely in the nature of policy decision by the concerned government and it was in keeping with this principle that we in our last order dated 13.04.2021, had directed the government to think about restricting public movement to break the chain of Covid infection.”

“However, in the affidavit filed today nothing concrete has been placed before us. No concrete plan has yet been chalked out in the light of our observations made in our last order though some efforts of course, have been made to engage some private hospitals to convert them as Covid hospitals, but even there facilities available are not upto mark. We also do not see anything new in the government guidelines issued on 17.04.2021,” the bench lamented.

The court also did not hesitate to criticise the government for compelling teachers and policemen to perform various duties in the panchayat elections, where all COVID-19 norms and protocols were being blatantly thrown to the winds.

Also read: We Know the ‘Harvard’ Study on UP is Not from Harvard. It’s Also Not Much of a ‘Study’.

The bench pointed out how masks were avoided with impunity. “In our considered view action is liable to be taken against the organisers who did not anticipate such eventualities under the Uttar Pradesh Public Health Epidemic Diseases Act, 2020 and/ or any other relevant Act force. The action taken shall be placed before us on the next date fixed,” the bench had warned.

The judges had further made it a point to clarify why they were compelled to order action. “If popular government has its own political compulsions in not checking public movements during this pandemic, we can not remain mere passive spectators. Public health is the top most priority and call of the moment and any complacency of any degree today will cause havoc to people. We can’t shirk away from our constitutional duty to save innocent people from the pandemic which is spreading due to the negligence of a few. Thus in the larger public interest, we are called upon to pass orders to break the chain of the pandemic COVID-19,” they added.

Significantly, all these were issues which should have ideally drawn the attention of the state authorities .

It was another matter that the government was still far from coming to grips with the worsening pandemic situation in UP. The government continued to issue statements with tall claims of “improvement’ in the daily situation. The fact, however, remains that people were dying helplessly in the absence of treatment and their kin were compelled to stand in long queues to perform the last rites of their corpses. Is anybody listening?