The protest and subsequent police crackdown could cost the BJP electorally. 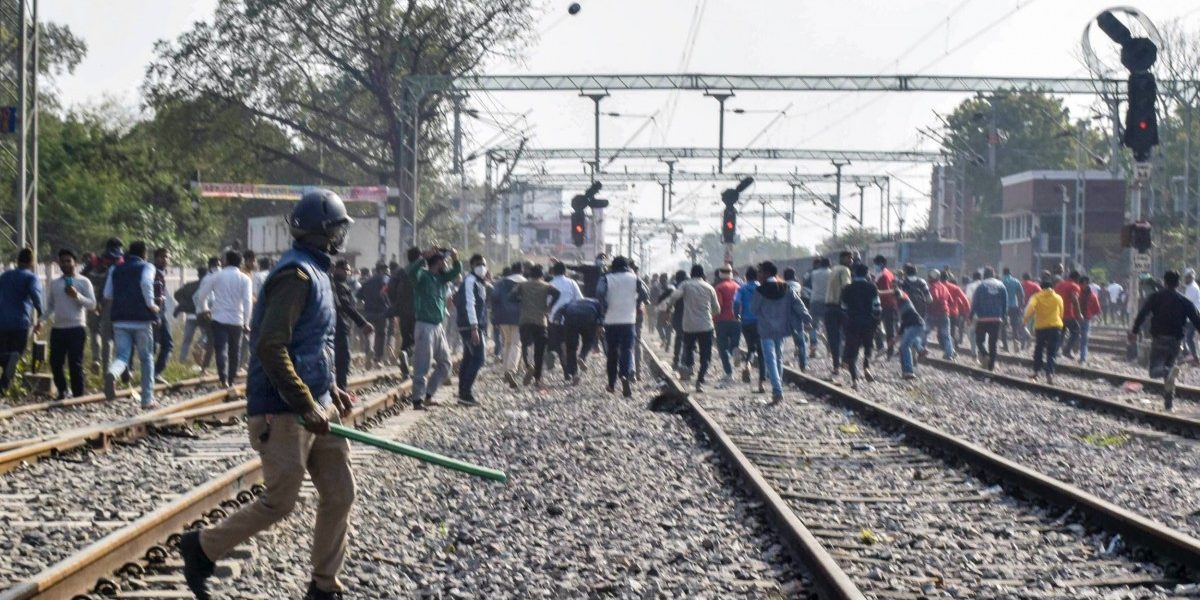 Lucknow: On the eve of Republic Day, the Uttar Pradesh police allegedly beat up aspirants who protested in Prayagraj against the alleged anomalies in the Railway Recruitment Exam (RRB) exam. Two protesters were arrested by the police on Wednesday. Soon after the crackdown video went viral on social media, opposition parties and students’ unions lashed out at the Yogi Adityanath government.

During election season, this incident could prove costly to the ruling Bharatiya Janata Party (BJP) government. Opposition parties have been trying to bring the issue of unemployment to the centre of politics since the beginning of the campaign. Now, the opposition is mobilising unemployed young people over the brutality towards them. Students’ unions also announced plans to hold a protest against the police crackdown in Lucknow.

The police crackdown started in the afternoon of Tuesday, when the aspirants were protesting at Prayagraj railway station. By evening it had intensified, when the police barged into the lodgings where aspirants stayed while preparing for various competitive exams.

Following their return from the protest, students alleged that khaki-clad men broke open the doors to the rooms where students were sleeping and studying. The mob allegedly dragged them outside and beat them up on the stairs and in galleries of the lodgings.

On Tuesday, railway aspirants and students’ unions gathered at the Prayagraj railway station to protest against the alleged anomalies in the non-technical popular category (NTPC) exam conducted by the RRB. Different students’ unions, including the Yuva Manch and Samajwadi Yuvjan Sabha, participated in the protest. A group of protesters allegedly moved to the railway track to stop trains.

The Yuva Manch accused the police of targeting peacefully protesting aspirants. The coordinator of the Yuva Manch, Rajesh Sachan, demanded that the BJP government stop its crackdown and listen to and solve the aspirants’ grievances.

Sachan told The Wire over the phone, “The police vandalised the lodgings and rooms of aspirants where they were staying on rent. Police broke the doors using a weapon.” He went on to say that many aspirants received injuries during the incident. While sources said Sachan was also taken into custody in the evening, the police did not confirm it.

When contacted, the distinct administration admitted that the police had used force to disperse the protesting mob. ASP Dinesh Kumar Singh told The Wire that the police had arrested two protesters. Those who were arrested were identified as Pradeep Kumar and Mukesh Yadav. “The police made an arrest on the basis of the video of the incident,” the ASP added. Singh alleged that the students pelted stones at the police and tried to damage the railway property.

The All India People’s Front condemned the railway’s decision to bar the protestors from recruitment. Dinkar Kapoor, the Front’s leader, stated that barring peaceful protesters from recruitment is an injustice. According to Kapoor, “The Railway ministry issued an undemocratic notice that those who protested against the anomalies would not be recruited into the department.”

The Congress has lent its support to the railway’s aspirant agitation. Party state president Ajay Kumar Lallu said, “This is deplorable that the ruling dispensation has been targeting those who are questioning its policies on employment.” Lallu told the aspirants that they should continue their movement in a democratic manner and that the Congress would support the unemployed youths’ agitation at each front.

The Samajwadi Party also condemned the alleged police violence against students. Party spokesperson Abbas Haider said, “Whenever the young demand a job in this government, they receive only brutality. The youth will bring a revolution to the country by dislodging the arrogant party from the government.” Abbas also said that the government is duping job seekers by selling costly forms but does not complete the recruitment process sincerely and on time.

Meanwhile, the students’ unions also announced plans to hold protests against the government in the state capital. Vishal Singh of the National Student Union of India (NSUI) told The Wire that various students’ unions will protest at Lucknow University on January 27 against the arrests of students in Prayagraj. According to Singh, the students’ wings of the Samajwadi Party and Left parties will also participate in the protest.

Another student leader, Nitin Raj of the All India Student Association (AISA), said, “Just a few hours before Republic Day eve, we learned about the ruthless suppression of students in Prayagraj. All of this barbaric lathi charging on students and filing of FIRs on students and other protesters is totally at odds with the essence of Republic Day.”

S.R. Darapuri, a former IPS officer, also hit out at the government for filing FIRs against students and demanded that their grievances be resolved at the earliest and cases against them withdrawn.

According to the protestors, only one exam was announced in the earlier notification in 2019. But after the result on January 15, the Ministry of Railways issued a clarification, stating that the notification clearly mentioned that it was the second stage of the examination. Aspirants also claimed other anomalies, including in recruitment to Group D.