UP: Properties Linked to Accused Who Took Part in Protests Over Anti-Islam Remarks Demolished

Police demolished two such properties in Saharanpur and one building in Kanpur after claiming that they were 'illegal constructions.' 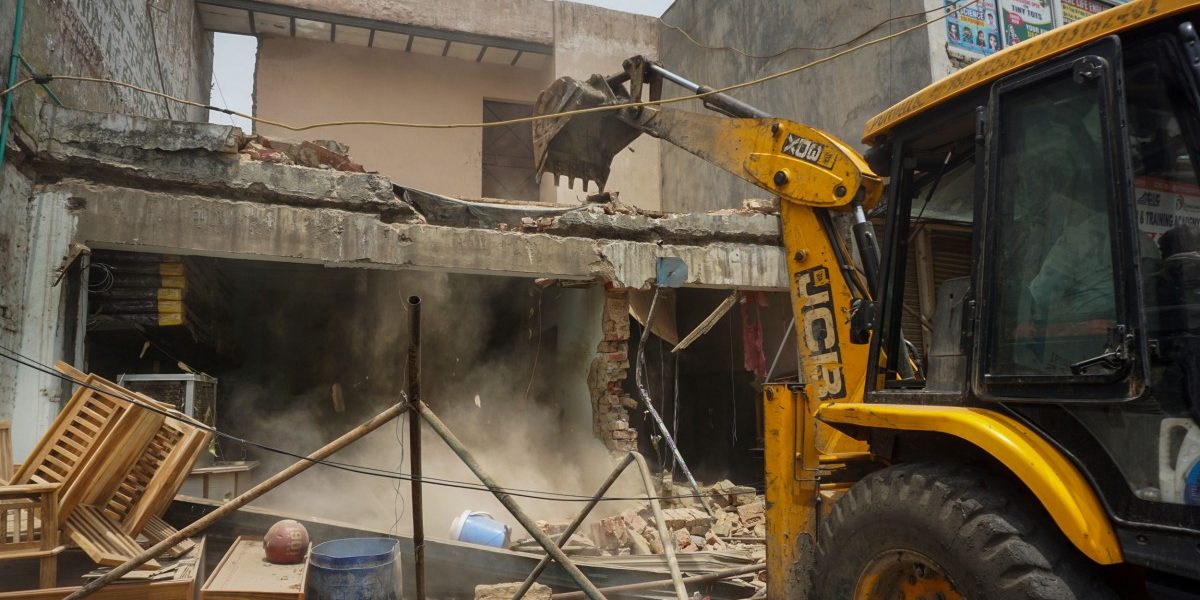 Representational image. A bulldozer demolishes illegal structures during an anti-encroachment drive by the DDA at Khichdipur village, in New Delhi, Wednesday, May 18, 2022. Photo: PTI

New Delhi: Police in Uttar Pradesh’s Saharanpur and Kanpur demolished the homes of the accused, and those connected to them, who took part in the protests against inflammatory remarks made in reference to the Prophet by Bharatiya Janata Party (BJP) leaders, NDTV has reported.

In the case of Sharanpur, the police themselves shared videos of houses being demolished with bulldozers. The videos show municipal teams out with bulldozers under a heavy police presence, demolishing parts of the homes of two of the accused, now arrested for disturbing the peace and social harmony.

The Saharanpur Police razed parts of the gates and outer walls of houses of accused Muzammil and Abdul Waqir. The police said the demolished houses were “illegal constructions.” A total of 64 people have been arrested in Saharanpur, according to the district police chief.

In Kanpur, police demolished a property belonging to one Mohammad Ishtiyaq, who the police said, was linked to Zafar Hayat Hashmi, the main accused in the violent protests that took place in Kanpur on June 3. The property in question was located in Swaroopnagar, three kilometres away from the spot where violence broke out in Kanpur.

The newly-constructed building, according to Anand Prakash Tiwari, additional commissioner of police (law and order), belonged to a “land mafia linked to a local leader,” referring to Zafar Hayat Hashmi.

Claiming that the demolition was carried out as per “norms and regulations,” Tiwari said, “There are reasons to believe that the investment has been made by the prime accused of the violence case.”

Meanwhile, a local court on Friday, June 10, remanded Zafar Hayat Hashmi to 72 hours of police custody along with Jawed Ahmad Khan, Mohammad Rahil, and Sufiyan. Tiwari said, as per the court orders, the accused were taken into police custody on Saturday morning and will remain in custody until June 14 morning.

The UP Police arrested 230 people across the state in connection with the protests relating to controversial remarks made against the Prophet by BJP leaders. Across seven districts of the state, 11 cases have been filed.

According to the NDTV report, UP Police’s additional director general (law and order) Prashant Kumar said the situation is under control in the state and said that law enforcement agencies will take stern action against all those “dare” to disturb peace and harmony. He added that those taking part in violence would have their properties seized and will be forced to pay for damages caused to private and public property.