Police have said the notice released with the intention of black marketing and spreading rumours. The hospital maintains it was faced with crippling shortage. UP CM Yogi Adityanath visits a COVID-19 hospital prepared by DRDO, at Shilpgram in Lucknow, Wednesday, May 5, 2021. Photo: PTI

New Delhi: Uttar Pradesh police has registered an FIR against the director of a Lucknow hospital and others after the former released a notice saying there was an oxygen shortage.

Police have claimed that the notice, released by Sun Hospital’s director Akhilesh Pandey on May 5, was published with the intention of black marketing and spreading rumours.

The FIR was registered at Vibhuti Khand police station.

“After repeated requests to the UPCM/Central Government, we are not able to get enough oxygen supply. Hence we request the family members of those patients who are on oxygen support to take their patients to a higher centre for further management. We are extremely sorry for the inconvenience,” the notice said. 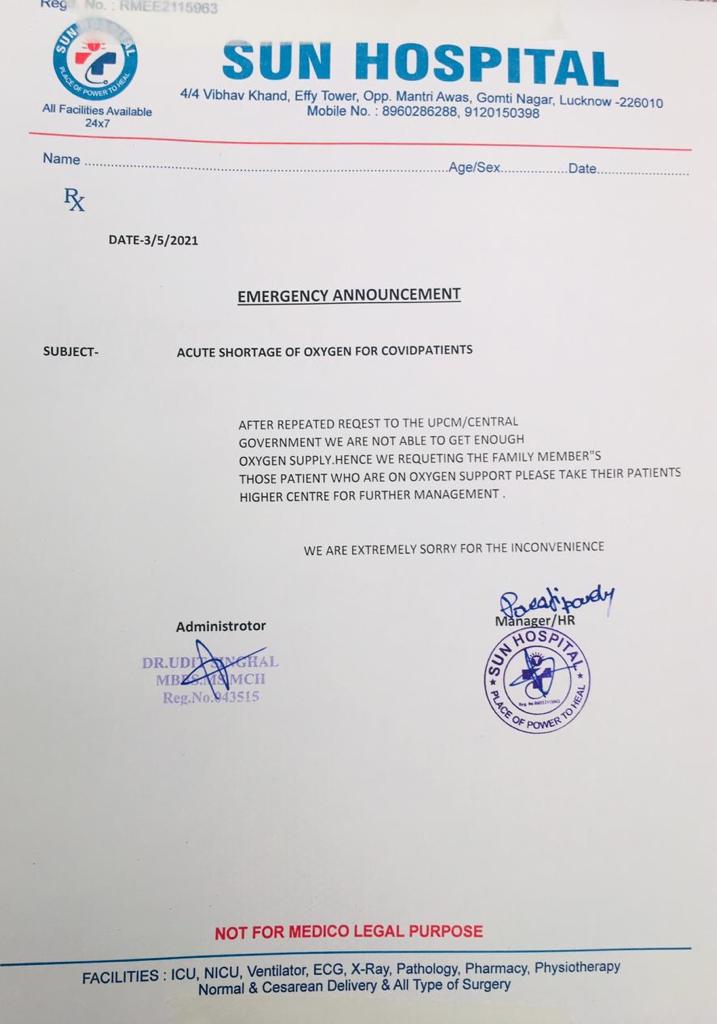 Police claim that the notice was released to “spread rumours” on oxygen shortage and have accused the hospital authorities of having intentions of black marketing.

A notice was sent to Sun Hospital, accusing the hospital of breaching COVID-19 protocols. “It has been directed that COVID protocols should be strictly followed and no rumours should be spread to create panic among people. But a notice dated 3 May was posted by your hospital on social media asking the critical oxygen support COVID patients’ families to shift their patient to another hospital citing paucity of oxygen,” it stated.

Further, it read, “Due to this, panic was created among people. After investigation we found that the hospital at that time not only had 8 jumbo oxygen cylinders, but also 2 B type oxygen cylinders, and a concentrator.”

Also read: COVID-19 Patients Dying Due to Oxygen Shortage Is Not Less Than a Genocide: Allahabad HC

According to this notice, the investigation reportedly found that there were 25 COVID-19 patients in the hospital out of whom 20 were on oxygen support, and “enough oxygen was available for them.”

The notice also said that not only was the notice was published with malicious intent, but was also factually incorrect. It read, “You told the officials that there are 38 COVID patients admitted in your hospital. But according to the list provided by you, there were only 25 COVID patients. And you could not also provide any document that any patient may have to be discharged due to oxygen shortage.”

“You tried to hoard oxygen with a misleading notice. And so that you could get oxygen supply without an audit, you also put the notice up on social media. This attempt to hoard oxygen is against the COVID protocols, a serious crime which will jeopardise patients in other hospitals,” it further read.

Sun Hospital has been charged with sections 51 (punishment for obstruction, etc) and 52 (punishment for false claim) of the Disaster Management Act 2005, Section 3 (penalty) of the Epidemic Diseases Act 1897 and Sections 188 (disobedience to order duly promulgated by public servant) and 269 (negligent act likely to spread infection of disease danger­ous to life) of the Indian Penal Code.

The FIR states, “The District Magistrate had strictly directed that considering the pandemic, no rumours should be spread to create panic among people. But in Gomti Nagar’s Sun Hospital, on 3 May, a notice was posted on social media saying that COVID patients admitted in the hospital should be shifted because of shortage of oxygen. This created fear and panic among the patients’ families.”

The hospital maintains that there were a total of 38 patients admitted at the time. Dewendra Tiwari, nursing in-charge at the hospital told The Wire, “They can check our cameras…we did not have even one bed empty at that time.”

Further, he asked, “How could we even think of black marketing during such a situation when we cannot even provide oxygen to our patients?”

Shalabh Mani Tripathi, media advisor to Uttar Pradesh Chief Minister Adityanath repeated to The Wire the claim in the FIR that the hospital had enough oxygen but was trying to stock more for black marketing purposes.

In late April, insisting that there is no shortage of oxygen in any private or public COVID hospital in Uttar Pradesh, Adityanath had asked officials to take action under the National Security Act and the Gangsters Act against “anti-social elements” who spread “rumours” and propaganda on social media and try to “spoil the atmosphere”.