Adityanath's reference to Jinnah can be seen as a jibe at political rival and Samajwadi Party chief Akhilesh Yadav who will also be contesting in the upcoming assembly elections in the state. 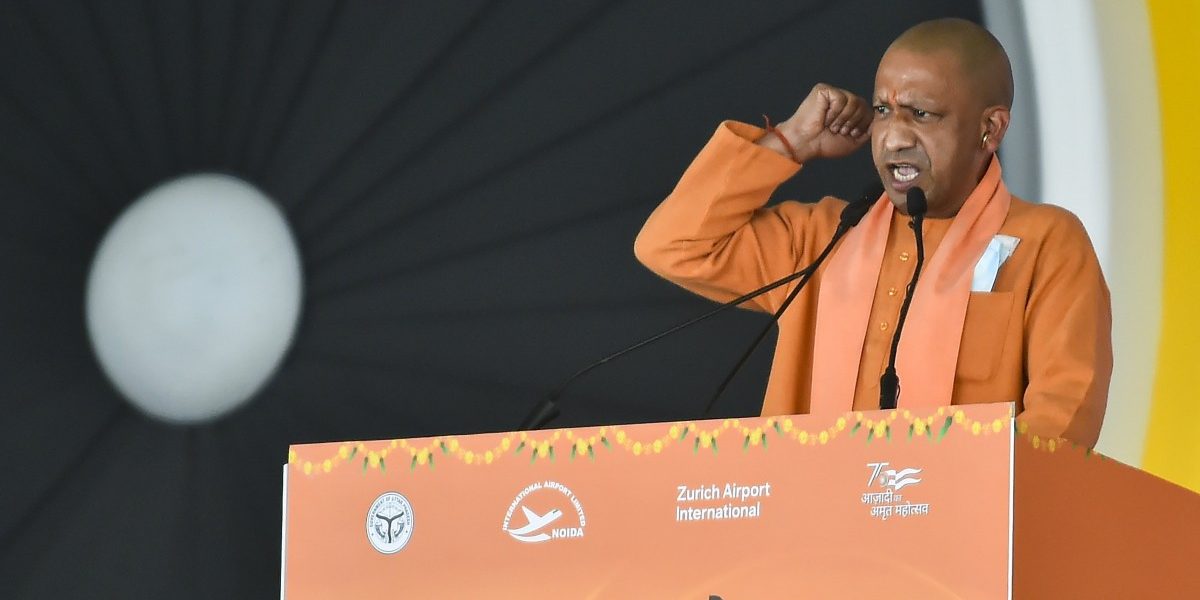 New Delhi: UP chief minister Yogi Adityanath on Thursday, November 25, hit out at some undefined “followers of Jinnah” for instigating riots in the western region of the state, India Today reported.

Adityanath’s remarks came at the foundation stone laying ceremony of the Jewar International Airport in Western UP’s Gautam Buddh Nagar, which is set to be operational by 2024. While addressing the gathering, he said, “Farmers of this land in the past tried to spread the sweetness of the sugarcane grown here. But some people caused a series of riots which spoiled the sweetness of the sugarcane.”

“Today, the country has to decide whether it wants to give new wings to the sweetness of sugarcane here or allow the followers of Jinnah to commit the mischief of causing riots,” he continued.

Adityanath’s mention of Muhammed Ali Jinnah, a leader of the All-India Muslim League who is widely considered one of the figures responsible for India’s partition in 1947, can be seen as an oblique reference to Samajwadi Party (SP) leader Akhilesh Yadav who had referred to Jinnah as one of the leaders who fought to secure India’s independence from the British during an event commemorating the birth anniversary of Sardar Vallabhai Patel in October.

While Yadav had also referred to Patel, Mahatma Gandhi and Jawaharlal Nehru while mentioning those who helped India secure its freedom, several ruling party members and ministers had circulated selective clips where the SP leader can only be heard mentioning Jinnah.

Yadav will also be going up against Adityanath in the upcoming UP assembly elections, to be held next year.

Adityanath’s remarks also come after All India Majlis-e-Ittehadul Muslimeen (AIMIM) chief Asaduddin Owaisi’s remarks on November 21 where he said that if the Citizenship Amendment Act (CAA) and the National Register of Citizens (NRC) are not withdrawn, protestors would turn UP’s streets into Shaheen Bagh.

Shaheen Bagh is the South Delhi neighbourhood which was at the heart of the anti-CAA protests in the capital which began towards the end of December, 2019.

Adityanath had responded to Owaisi’s remarks, referring to the AIMIM leader as abba jaan, a term the UP chief minister repeatedly uses to address Muslims, threatening strict action against those who attempt to incite violence using the CAA and NRC. The AIMIM will also be contesting the UP elections.

Prime Minister Narendra Modi was responsible for pushing the button by which the foundation stone of the airport was laid at Thursday’s event. While the first phase of its construction, slated to be completed by 2024, would result in a capacity to serve 12 million passengers every year, the capacity by the end of the fourth phase of construction is expected to be 70 million, making it Asia’s largest airport, the Indian Express reported.

The Prime Minister, speaking at the event, called out the previous UPA government for halting the construction of the airport, claiming that plans for the same had been envisioned “two decades ago”.

Modi went on to note that the people of the state have suffered in the past on account of caste politics, scams worth thousands of crores and a nexus between politicians and criminals. “The state that was led to darkness and deprivation by previous governments is now leaving its mark globally,” Modi said.