The Centre has refused to divulge details of the Bill yet. 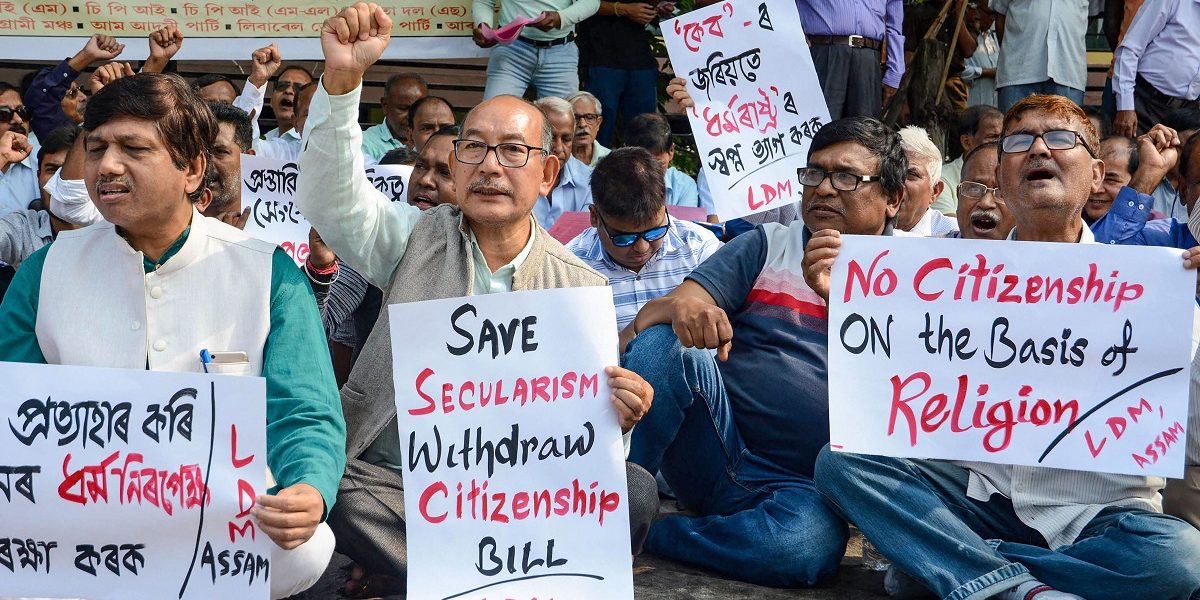 Activists of Left Democratic Manch Assam stage a protest against the Citizenship Amendment Bill in Guwahati on November 18, 2019. Photo: PTI

New Delhi: Among five other Bills, the Union Cabinet today also gave its approval to the contentious Citizenship (Amendment) Bill. However, the Centre has continued to maintain secrecy about the contents of the Bill.

The Bill, which aims at amending the Citizenship Act to grant Indian nationality to six religious groups belonging to Pakistan, Bangladesh and Afghanistan – the Sikhs, the Hindus, the Jains, the Buddhists, the Parsis and the Christians – was passed in the Lok Sabha in the last session but expired as it couldn’t be passed in the Rajya Sabha during the session. It is going to be tabled in parliament in the ongoing winter session any time from today.

As per the government’s script, Union minister Prakash Javadekar, speaking to media persons about the cabinet decisions at a press conference in New Delhi, refused to give out any details to about the clauses of the Bill. “Today I am giving only the headlines, you will get to know about the details when it is tabled in parliament and its clauses are for discussion in pubic,” said the minister.

On asked whether the Bill had been tweaked to address the interests of indigenous people and particularly those of Assam, which has been witnessing a series of street protests as the Bill would violate the terms of Assam Accord, he replied that it would “take care of all interests, including indigenous interests” and “will answer all your queries”.

He said, the Bill “is in national interest and in the interest of natural justice and is not against anyone”. On seeing the details, he added, “everyone will accept the Bill”.

To a specific question about a general perception brewing in Assam that while the Congress facilitated settling down of “Muslim Bangladeshis in the state and another national party, the BJP, is doing the same with Hindu Bangladeshis”, the minister refused to comment, stating, “We will answer all your questions after it is tabled in Parliament which could be tomorrow or day after”.

He said the chairman of both the houses of parliament would decide the dates for tabling the Bill.

Between November 30 and December 3, Union home minister Amit Shah met a number of delegations of political parties and civil society groups from the Northeast to discuss their reservations on the Bill. Late December 3 night, Shah also met the top leadership of All Assam Students Union (AASU) in New Delhi. The AASU had spearhead the anti-foreigner agitation in the state between 1979 and 1985 which culminated with the signing of the Accord with an exclusive citizenship cut-off date for the state. As per that date, Assam accepted undocumented migrants between 1951 and March 1971, unlike in the rest of India.

Interestingly, the Asom Gana Parishad (AGP), born of the Accord and now an alliance partner in the BJP-led state government, is divided on the issue. AGP president and a minister in the BJP government, Atul Bora, told media persons that “Assam already took many illegal Bangladeshis and what is the harm of taking a few lakhs more.”