Right-wing groups reportedly gathered in communally sensitive areas even after being denied permission by the police. 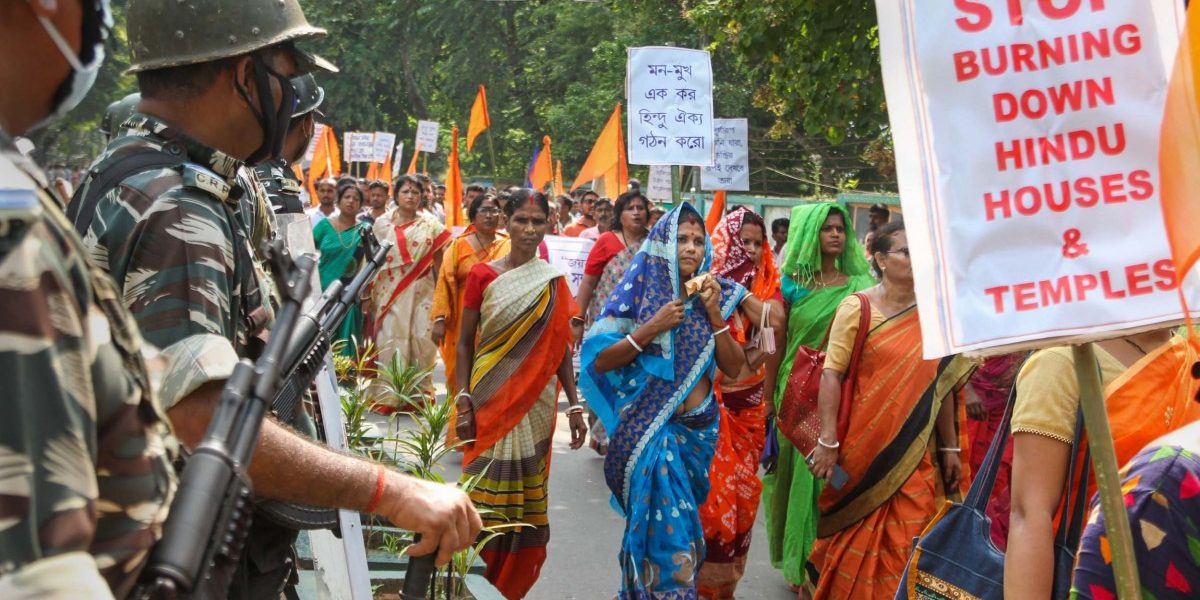 Protestors hold placards and raise slogans during a protest against the alleged attacks on Hindus in Bangladesh, near Bangladesh High Commission in Agartala, Thursday, Oct. 21, 2021. Photo: PTI

Agartala: More than 12 persons including three police officer were injured after a clash took place on Thursday between the police and right-wing groups in the Maharani area under Udaipur sub-division of Tripura’s Gomati district.

The police had denied right-wing groups permission to hold a protest rally against purported communal attacks on minorities in Bangladesh.

Police said that following reports of deterioration of law and order, they were not granting permission for the protest rally as the rally was supposed to be held in Fotamati and Hirapur areas in the subdivision, which have some minority housing clusters.

Speaking to The Wire, inspector general (law and order) Arindam Nath said a rally was supposed to take place organised by the Vishwa Hindu Parishad (VHP) in Futamati, Maharani and in Hirapur area, which is minority dominated.

“Since a few days, we were receiving information of some mischief. As a precautionary measure the district administration has promulgated CrPC 144 on Thursday which was to conclude on Friday at 6 am. When the district magistrate of Gomati district and the superintendent of police went patrolling, more than 200 activists of the VHP came out for rally and were adamant to hold the rally. They were dispersed using mild force,” Nath said.

He said initially three police personnel and other security force workers sustained injuries after the protestors resorted to stone pelting when their procession was halted.

“We have registered a suo moto case on the incident,” Nath said.

Abhijit Chakraborty, a local RSS leader who joined the rally, claimed that they had taken prior permission but when they came out and assembled for the procession, they were obstructed citing security reasons.

“The protesters were baffled by this sudden obstruction and there was some scuffle. We suspect some people might have tried to confuse the administration saying we would disrupt law and order. Twelve protesters sustained injuries in the lathi charge and are now under treatment at Gomati district hospital,” Chakraborty said.

However, the vice-president of the Vishwa Hindu Parishad said that no such rallies were organised by their organisation and claimed that the rally was organised by another right-wing group, the Hindu Jagaran Manch.

Later, Shashvat Kumar, SP, Gomati district told The Wire, “The organisation was not specific. There were gatherings of people in that area, and since the area was communally sensitive an order under CrPC 144 was issued by the district magistrate. Still they gathered and the police tried to resist them peacefully, and they started pelting stones on at. So police used mild force to disperse them.”

On Thursday, similar protest rallies were taken out in Agartala in West Tripura and Dharmanagar in North Tripura district as well.

Around 13 organisations held a large protest rally at Agartala on Thursday and submitted a deputation to the Bangladesh assistant high commissioner’s office here demanding that the authorities identify people involved with attacks on minorities in Bangladesh and punish them.

Over 10,000 people joined in a similar protest rally at Dharmanagar in north Tripura district on Thursday evening.

Meanwhile, the second Bangladesh Film Festival which was scheduled to start at Agartala on Thursday was cancelled amidst tension and protests over the attacks on minorities.

Speaking to reporters, assistant Bangladesh high commissioner in Agartala Md Jobayed Hosen said the three-day-long film festival was scheduled to be held from October 21 to 23 as a joint initiative of the Bangladesh Information and Cultural Affairs Ministry and the Assistant High Commissioner’s office at Agartala.

“We have finalised almost all the preparations. In the meanwhile, the incidents of intolerance in Bangladesh have generated some reactions in this state. We considered the feedback we received from these reactions and overall feedback on social media and other mediums and have decided to cancel the film festival as of now,” he said.