In April, injections worth Rs 10 lakh were ‘stolen’ from Calcutta Medical College and Hospital. TMC leader Nirmal Maji has been accused as the key person behind the scam.

Kolkata: With the Calcutta high court seeking the West Bengal government’s response to a PIL (public interest litigation) into the Tocilizumab injection scam, the focus is back on whether the government takes the real culprits to the task, or continues to try and brush the real issue under the carpet.

As many as 26 ampules of the injection worth Rs 40,000 each in the retail market were illegally siphoned off from the Calcutta Medical College and Hospital (CMCH) sometime late in April using fake prescriptions. Not a single injection was used on the patients for whom they were issued.

It was at a time when medicines like Remdesivir and Tocilizumab were in short supply across the country. The Print reported on April 28 how a Mumbai resident could not find a single ampule of Tocilizumab for his uncle admitted to a hospital in Kolkata. In the first week of May, Mamata Banerjee wrote to Prime Minister Narendra Modi complaining of the inadequate supply of essential medicines like Tocilizumab to the state.

The irregularities at CMCH came to light only after a post on a Facebook page under the name West Bengal Congress Supporters went viral on June 1, more than a month after the incident.

In an audio clip attached with the post, a female voice can be heard speaking over the telephone to a woman at the other end who identifies herself as the ‘CCU sister’. When the sister asks for a receipt copy of the 26 Tocilizumab injections that the other woman had taken, the unidentified voice says she took them on being asked by ‘Nirmal Maji’. She also says she had already spoken to Maji and ‘Debasish Sir’ who assured her that there was no reason to worry. The next Monday she will either give a receipt copy, or the papers on which the requisitions were made will be torn off.

“Discussions were held at the top level. The matter will be taken care of,” she says. The conversation makes it abundantly clear that the illegality was detected but kept suppressed.

The Facebook post, addressed to chief minister Mamata Banerjee, claimed the conversation was between a CCU sister and Dr. Debangshi Saha, a medical officer of anaesthesiology department at CMCH. Incidentally, she is the daughter of Trinamool strongman from Kalighat area, Pratap Saha. According to CMCH insiders, ‘Debasish Sir’ may refer to an associate professor at the department of anaesthesiology. Nirmal Maji is the Trinamool MLA from Uluberia North constituency in Howrah district and physician by profession. He is known to be a close confidante of the chief minister.

Two separate investigations — one by a seven-member team set up by the CMCH authorities and another by a three-member team of the state health ministry — were carried out into the incident and reports were submitted to the health ministry on June 5. None of the reports were made public. Sources said both the reports found Dr. Debangshi Saha and sister Sunita Bhaumik at fault, and no mention was made of Dr Nirmal Maji’s involvement. On June 11, Dr Saha was transferred to Jatamari public health centre in Sitalkuchi, Coochbehar. On June 14, Bhaumik was transferred to Mathabhanga sub-divisional hospital, Coochbehar.

A PIL was filed in the Calcutta high court on June 5 seeking an independent investigation into the incident. On June 21, a division bench of Acting Chief Justice Rajesh Bindal and Justice Arijit Banerjee asked the state to file an affidavit by July 2.

What is the correct procedure?

Tocilizumab is a monoclonal antibody acting against IL6, the cytokine that the body produces in its response to the coronavirus infection, a phase known in common parlance as a cytokine storm. In some studies across the world, it has been found that Tocilizumab is useful in suppressing this cytokine storm in severe COVID-19 cases and that it could attenuate their rapid progression to mechanical ventilation. Studies have also claimed that Tocilizumab is effective in decreasing mortality in such patients. 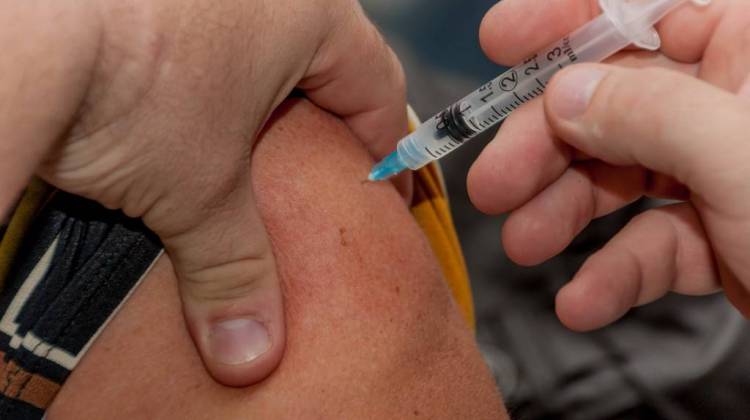 The medicine is given to patients free of cost in government hospitals in Bengal. A consultant or senior resident verifies the need for the use of these medications (under Emergency Use Authorisation or EUA) and notes the same, including the number of doses, for how many days, etc., in the bed head ticket. Then it is entered into a medicine indent form, since it is a high value medicine. Then the indent is signed by the prescribing doctor or someone duly authorised by him or her. Then it is countersigned by the on-duty nurse, rechecked by the nursing in-charge and sent to the pharmacy or store. The store in-charge then substantiates the same for authentication and finally supplies it to the ward. Once the injection is duly received in the ward and given to the patient, it is duly recorded in the medicine card and nursing notes.

The Comprehensive Guidelines for Management of COVID-19 Patients issued by the health ministry of the Union government recommends only a single dose of Tocilizumab for severe and critically ill patients. A senior doctor told The Wire that a second dose is administered very rarely in severe cases.

‘None of the patients received the injection’

In brazen disregard to all procedures, requisition for 26 Tocilizumab injections were made against five patients on pathology specimen examination forms on April 24, 2021. The patients, all of them admitted in the Green Building CCU, were Kashmiri Khatoon (4 ampules), Ruksha Begum (6 ampules), Sunil Kr Nandy (6 ampules), Gopal Krishna Chowdhury (6 ampules) and Roshni Sharma (4 ampules). Pathology specimen forms, as the name suggests, are used for documenting and sending a specimen from the human body to the laboratory so that it can be examined.

In a tell-all telephonic conversation with a television journalist, the accused CCU sister said she was scared when Dr. Debangshi Saha took the name of Dr. Nirmal Maji. “I knew it was not the correct procedure. But I made a mistake. The way Dr. Debansghi approached me, I could not say no. None of the patients received Tocilizumab. Dr Debangshi had promised one month ago that she would return the medicines. But she hasn’t so far.”

A number of CMCH doctors The Wire spoke to said the irregularities were known to everyone but, none dared to speak up. “Who wants to risk a peripheral posting in these trying times!” remarked a doctor.

A senior functionary of the West Bengal Doctors’ Forum (WBDF) told The Wire that the investigations were an eyewash. “There should be an inquiry into where the injections went and what was the role of the said Nirmal Maji. The government is clearly trying to shield someone. During a raging pandemic, such misappropriation of life-saving drugs is criminal and calls for punitive action under the Disaster Management Act. All inquiry reports should be made public for the sake of transparency,” he said.

The WBDF has written to the chief minister seeking a “transparent and impartial inquiry” into the incident by “neutral and eligible persons”.

Proud of my integrity, says Maji

When contacted by The Wire on Saturday, Maji said, “I don’t want to comment on the issue. The health ministry is looking into it, and the matter is in court. As a physician, I have been treating people free of cost for 40 years now. If I wanted, I could have earned in crores by now. I don’t even own a flat or a car. I maintain honesty, accountability and integrity following the ideology of my leader Mamata Banerjee, and I am proud of it.” Earlier, he had refuted all allegations against him.

MLA Nirmal Maji was the minister of state for labour in the second term of the Trinamool government in the state. But his real clout lies in the health sector of the state. As the erstwhile chairman of Patients’ Welfare Committee of CMCH, he was learnt to have the final word in every decision taken at the centuries-old hospital. He resigned from his post before the 2021 state polls. During the investigation, the health ministry had sought his resignation letter.

Maji has courted controversy a number of times in the past. In 2015 he had arranged for dialysis for a pet dog at the state-run SSKM Hospital. He was then the president of the state medical council and the West Bengal chapter of the Indian Medical Association. In 2020, he had made harsh comments against medical students of CMCH during his speech at the foundation day programme.

“He and his close aides wield uncontrolled power over everything at CMCH. It hardly matters whether he holds a post or not,” a CMCH doctor said.