To Fight the Deadly Second Wave, a Lockdown Is the Only Available Strategy

Vaccination should continue apace but that will not break the transmission of the disease any time soon. 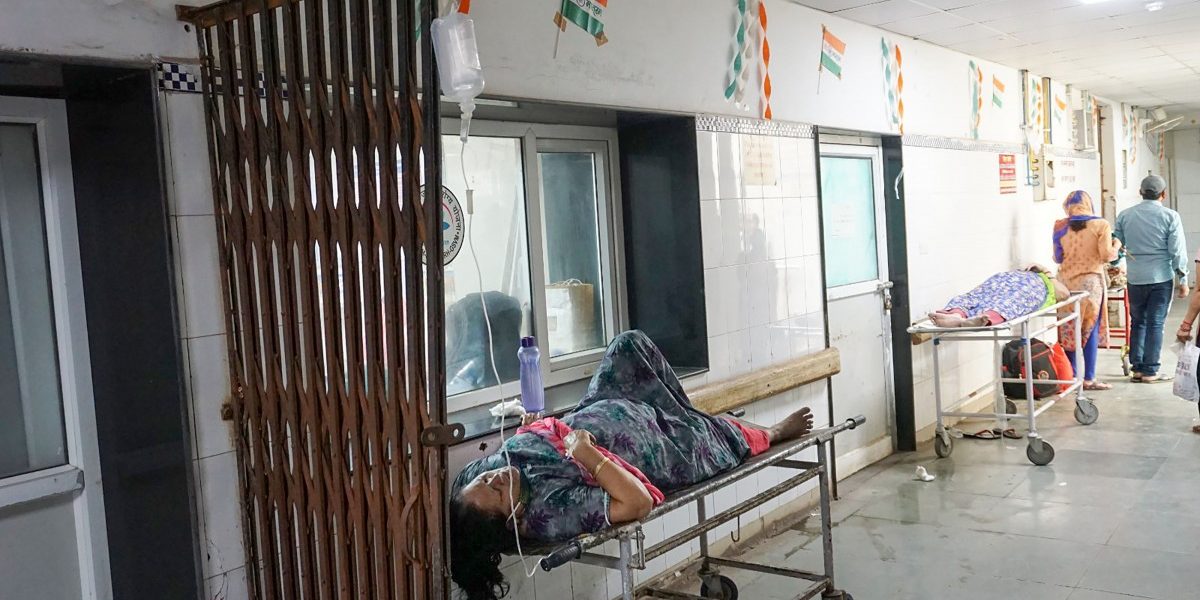 COVID-19 patient waiting for admission outside LLR hospital amid a surge in coronavirus cases in record numbers across the country, in Kanpur, Saturday, April 24, 2021. Photo: PTI

The prime minister, in his short recent address to the nation, used the imagery of a ‘toofan’ and admitted that India has been hit by a frightening surge of COVID-19 cases. There is a near collapse of the health infrastructure, with horror stories coming from all around the country of people dying due to lack of hospital beds, oxygen and so on – the nation is literally gasping for breath. These are the reports from the metro cities, which are far better medically equipped than the smaller towns and villages. It defies imagination what the situation in the interior areas of the country could be.

The governments both at the Centre and in several states started acting in April, though the surge of infection was visible in some parts since the middle of March. Major cities imposed night curfews about two weeks ago and later converted them to lockdowns, though they are called curfews. Travellers, especially those returning from the Maha Kumbh, were screened before being allowed to enter states and cities.

The Central government, realising that the vaccination programme is not going well, has decided to open up vaccination to all above the age of 18. To meet shortages of vaccines, it has ordered more doses of vaccines and agreed to pay in advance to vaccine manufacturers so that they can ramp up production. The government has said that it is ready to certify other vaccines for emergency use which have received approval in the advanced countries. Production of remdesivir, a drug used in the treatment of COVID-19 and which is in short supply, is to be ramped up. To boost availability of oxygen, it has banned its use in less essential activities. To increase availability of hospital beds, hospitals are being converted into COVID-19 hospitals, hotels are being drafted to serve as hospitals and stadia, open grounds and hangers are being converted to hospitals.

Is this surge of activity in the last two weeks too little too late? Are these steps a knee-jerk reaction to show that the government means business? Will they be able to check the surging disease?

The surge in the disease has been evident since March. In mid February, there were 8,000 cases daily. This number rose to 23,000 by March 10 went up to 44,000 on March 20, 53,500 on March 30, 1,53,000 on April 10 and to 2,95,000 cases on April 20. What started in Maharashtra and a few other states has quickly spread across the country. So, in March itself alarm bells should have been ringing and action initiated. The experience of the US and Europe was that a second wave is inevitable. Instead of learning from that we claimed that we had managed the disease better than the advanced countries.

Numbers have been increasing over more than two months and with inadequate testing and contact tracing, it is difficult to stop the spread. Community transmission has been taking place. Migrant workers have been returning to their villages for some time. Many went back for Holi at the end of March. Others went for the Maha Kumbh and returned or are due to return. It has been beyond our capacity to test so many people and isolate them. Fake test certificates are available.

There are reports that a large number of people in the smaller towns and villages are now falling ill but do not have access to medical facilities. Hospitals, cremation grounds and burial grounds are under stress and not able to cope with the sudden surge of cases even in the bigger cities. Many are dying due to non-availability of oxygen and drugs. Remdesivir, a much sought after drug, even though WHO does not recommend it, is being black marketed according to reports. The Maha Kumbh has been halted and election rallies in West Bengal have been curtailed since can be superspreader events. But the damage is done over the last two months. The disease has spread and will keep proliferating for many weeks – many of the deaths we’re seeing were preventable.

Also read: COVID Has Exposed the Supreme Court’s Utter Disregard for the Plight of Ordinary Citizens

There are roughly three lakh cases a day currently, which some experts predict on the basis of mathematical models could rise to five lakh soon. A linear projection of present trends would suggest that the active case load could rapidly rise from two million to five million. This would lead to a catastrophic failure of the health system. We needed to have acted a month back.

What can India do today? The spread of the disease has to be halted quickly. But people carrying the disease have already spread out all over the country in the last many months, leading to a rapid rise in infections. Contact tracing will require getting in touch with crores of people which is almost impossible now.

If a medicine was available that would have helped, but that is not the case. Ramping up the health infrastructure will take time. Even if these are quickly set up, who will man these facilities since there is a shortage of medical personnel which is required for multiple tasks – to take care of the patients, do the paper work and vaccinate people on a massive scale? Many of the medical personnel are falling sick or having to take care of their family members who have got infected.

So, in addition to COVID-19 appropriate behavior, there are only two choices for slowing the spread of the disease and eventually stopping its spread – vaccination and lockdown.

The exact cause of the rapid spread of the disease since mid-February is not known. In 2020, we stopped people from entering the country in stages since February. That time the number of active cases were only about 100. This February, the number of daily cases were around 10,000 and at least three new virulent strains had been reported abroad since November. These strains entered India as well since we did not take adequate precautions. Are these the ones that are now propagating in India and spreading the disease? We do not fully understand since our genome testing is inadequate.

It is speculated that a new Indian variant, the double mutant, is spreading in India. But, without adequate genome testing it is difficult to tell. So, what do we prepare ourselves for? 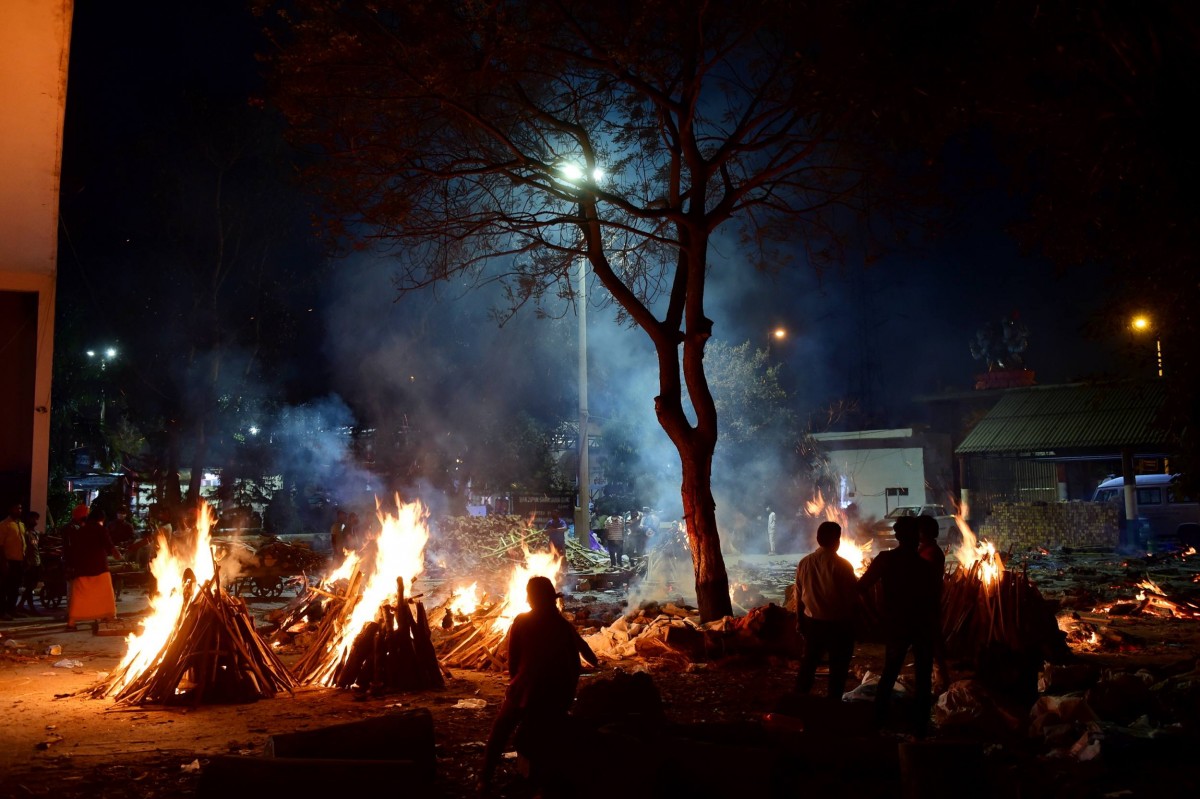 WHO says that mutations in the virus should not make the vaccines completely ineffective and current vaccines should provide some protection against the new variants. The hesitancy in this statement is a result of the suspicion that the new variants can evade the antibodies that the current vaccines generate. As it is, most vaccines have 60 to 90% efficacy. The implication is that some will get the disease, even though in a mild form, in spite of vaccination. So, if the new variants can evade the anti-bodies created by the available vaccines, efficacy of vaccines will decline.

Even if vaccination could be an effective tool to slow down the spread of the disease, our pace of vaccination is woefully inadequate. The Johns Hopkins University website says, “…we would need at least 70% of the population to be immune to keep the rate of infection down.” Last year it was said that if 60% of the population is vaccinated there would be `herd immunity’. If one goes by the lower figure of 60%, 84 crore people need two doses each of the vaccine. That is, 168 crore doses and if these have to be administered in 12 months, 14 crore vaccination have to be administered every month.

We started with a target of vaccinating one crore frontline workers and health professionals by end of February. Next, the elderly and those above 45 with comorbidities, numbering 30 crore had to be vaccinated by July 2021. This adds up to 31 crore in six months. At this rate it would take 15 months to vaccinate 60% of the population. Since we do not know how long the immunity lasts and if a booster is required every year due to mutations then there can be no herd immunity.

Our vaccination programme suffered from `vaccine hesitancy’. The media reports that many feel that there is nothing like a deadly virus going around or that they fear that the vaccine will have severe side-effects. This slowed down the vaccination programme. Many frontline workers did not come forward to get vaccinated. Many who were to receive vaccine in the second phase did not come forward so both the first and the second phase vaccination proceeded slowly. Only 12 crore have got at least one dose in three months. At this rate to vaccinate 60% of the population would take about 3.5 years.

In short, we are not going to achieve herd immunity anytime soon, certainly not in the next few months. Thus, vaccination is not going to prevent the immediate spread of the disease. It can only be a medium term strategy.

New strategy: A recipe for chaos

Is this a viable strategy to tackle the disease surge? Indeed not. We cannot suddenly vaccinate everyone or even 60% of the population. We are only vaccinating about five crore individuals a month. There are neither enough doses of the vaccines nor the facilities to administer 168 crore doses in a month or two.

Opening the vaccination to every one when there is a shortage of vaccines and facilities can only lead to chaos. There has to be a queue with prioritisation laid out. Without that, there will be black marketing as is happening with remdesivir and oxygen currently. A disaster is called the third crop in India. The well off and the powerful will get it while the poor and those in smaller cities and villages will be left out. Similarly, leaving it to the states to procure additional vaccines will lead to politics and bickering. The danger is that states will try to outbid each other and that will raise costs (as happened with ventilators in the US in 2020).

So, vaccination should continue apace but that will not break the transmission of the disease any time soon and the disease will continue to proliferate. New mutants can appear and delay matters further. As the health infrastructure which is already overwhelmed fails, the number of deaths will rise.

The only option left now is to effectively lock down for three weeks. After that the numbers may start declining. The lockdown is tough on workers but if properly implemented (as this author has been suggesting for the last one year), spread of infections will decline.

Businesses are opposed to a lockdown fearing further losses. But without that and with vaccination only a medium term strategy, the breakdown will cause social chaos and business will have to anyway shut down. A more brutal lockdown may be required later. A delay is fatal as the UK found out in the first wave in 2020. If we had acted in March itself the present precarious situation could have been avoided.

To conclude, there is need to properly sequence the short run and the medium run strategy. A short and sharp lockdown is tough but will help reduce the transmission of the virus from one person to another and enable the already exhausted health system to cope. The government has to do the right thing by the people and take the bull by the horn instead of making a show of acting when the horse has bolted.

Arun Kumar is the author of Indian Economy’s Greatest Crisis: Impact of the Coronavirus and the Road Ahead, Penguin Random House, 2020.