This August 15, Let's Swallow the 'Modicine' and Declare our Independence from Science

You know we are in deep trouble when India’s new science minister describes Gandhi’s ahimsa as ‘silent biological warfare’ and cites Modi as an exemplar of ‘scientific temper’. 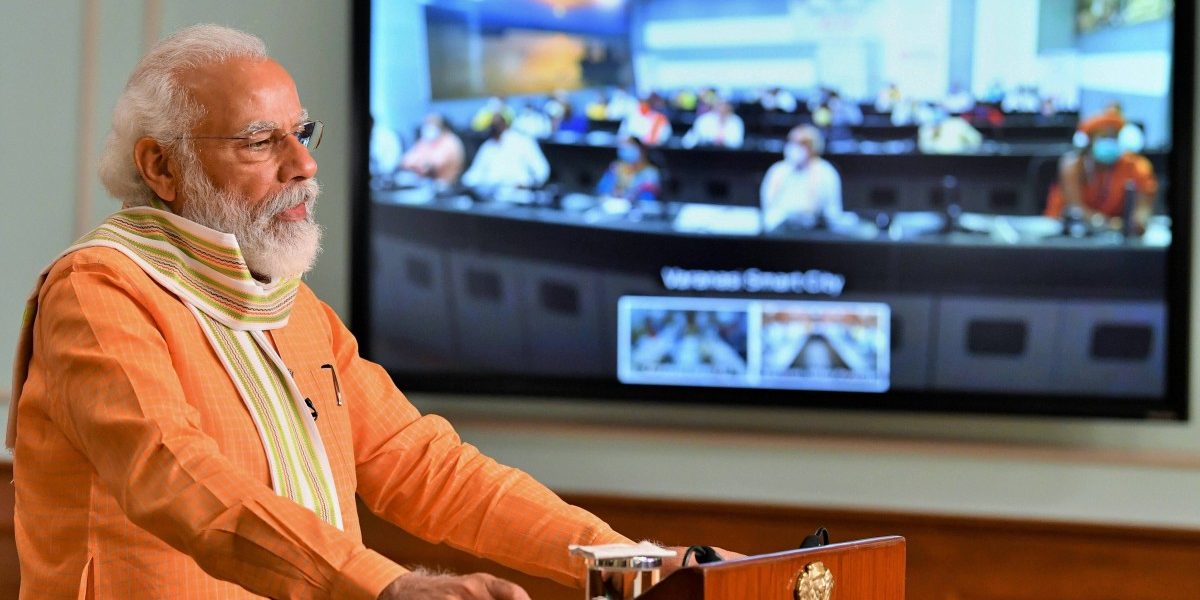 During last month’s Cabinet reshuffle, Prime Minister Narendra Modi replaced Harsh Vardhan as the Union science minister with Jitendra Singh. Since Modi has always pulled the strings, it didn’t matter who his puppet would be. However, Vardhan was a Cabinet-rank minister, whereas Singh is a minister of state. Even if he has science under his ‘independent charge’, effectively, the Ministry of Science and Technology has been demoted.

Just as well, for during Modi’s tenure as India’s prime minister, one thing has been clear: the government’s agenda is determined much less by the work of ministries and much more by what the leader needs done. So it doesn’t matter who heads the science ministry: Modi has the last, and only, word. In fact, even when the ministry had Vardhan at the helm, it wasn’t like great things happened, and there’s no reason we should expect different from Jitendra Singh.

(The same goes for Mansukh Mandaviya, the new minister who has succeeded Vardhan at the top of the health ministry: in 2019, Mandaviya outed himself as a yesman when he tweeted that generic medicines are “commonly known as ‘Modicines’”.)

Proof of Singh’s qualifications for the job has come sooner than excepted. On August 2, he told an event organised by Vijnan Bharti, the RSS’s science front, that when Modi went to  the Katra Vaishno Devi railway station in Jammu and Kashmir to inaugurate it in 2014, the prime minister had a brainwave — to install solar panels there because the day was sunny. “When I was talking about scientific temper, coming straight to contemporary times, according to me one of the most remarkable examples of a scientific temper around us today is none other than Prime Minister Narendra Modi himself,” Singh said. Do we do science when the room is dark and we flip the light switch? 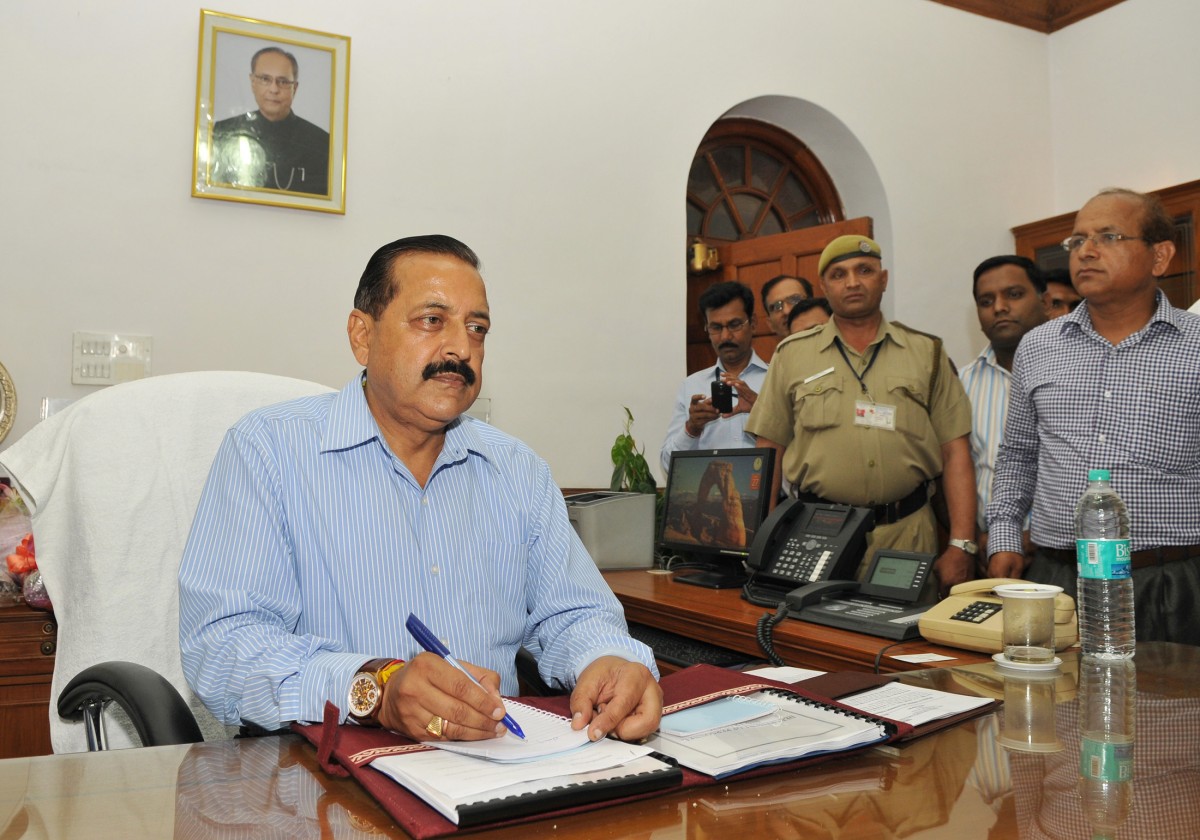 It must grate that the term ‘scientific temper’ in the Indian Constitution is associated with Jawaharlal Nehru, and perhaps this is Singh’s, and Modi’s, annual attempt to appropriate the term for themselves. But “the problem is that nobody in the world of Hindutva has any vision – good, bad or indifferent – when compared to Nehru, and that includes our prime minister,” Aakar Patel wrote in Deccan Chronicle earlier this year. This may be the problem as far as science is concerned: the Modi government has always been blind to anything beyond what will keep it in power. When it did see science, it only saw the part of science that had managed to enter its field of view because it could be traded for something – commerce, diplomacy, industrialism, crony capitalism, whatever.

Remember how the Modi government took credit for the anti-satellite missile test in early 2019, in a two-pronged strategy to wow the masses ahead of the Lok Sabha elections and to sidestep the Election Commission’s ban on TV time since poll campaigning had ended?

In this vein, it’s curious why Singh didn’t also mention Modi’s idea to use wind turbines to extract water from the air or when he claimed credit for the Balakot airstrikes evading Pakistani radars because he gave the go ahead amidst rain. Or how, under Modi’s scientific leadership, the environment ministry has become a single-window clearance system for projects to destroy India’s environmental health. Or that Modi promoted the pseudoscience-filled AYUSH department to a ministry shortly after he assumed power in 2014.

This is also why India’s existing crop of leaders have constantly mistaken pseudoscience for science: running their mouths will get them headlines and keep their names in the public consciousness, and help ingratiate themselves to the top brass by signalling that they’re also capable of spewing nonsense. They haven’t cared for science, the scientific temper or just being scientific. Science to them is untenable, invalid even, because it refuses to curve itself around Modi.

Modi funded the development of Covaxin and the production of Covishield – in his establishment’s peculiar ways – because not getting behind these COVID-19 vaccines would have knocked him out of power. Before that, he and his colleagues had approved the use of a slew of drugs to treat COVID-19, with zero evidence and crucial questions about their safety. They also took credit for funding Gaganyaan and built the “world’s tallest statue” to tout their self-described greatness – just as Modi allowed the Kumbh Mela’s shahi snans to happen before appealing, towards the end, that people observe the event only symbolically. 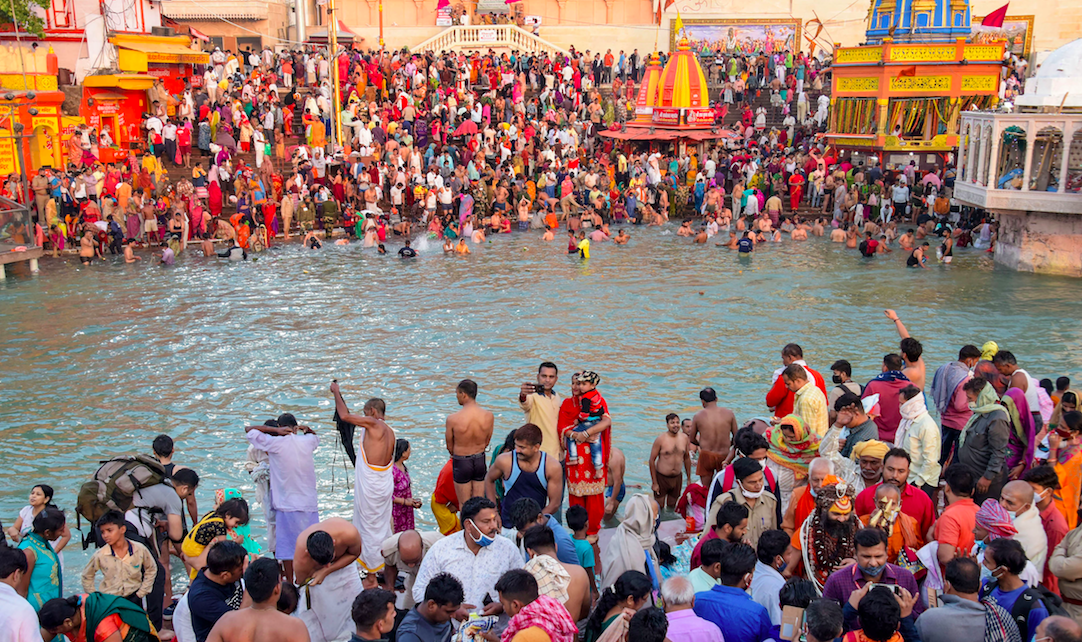 They haven’t recognised the foundations of science at one end and they haven’t realised where science ends at the other. For example, at the August 2 event where Singh spoke, he said M.K. Gandhi “used ahimsa as a scientific tool for biological warfare”! (Listen from 55’04’’.)

What Singh misses is that Gandhi’s ‘experiments with truth’, such as they were, were suffused with what Michel Foucault later called biopolitics – “a political rationality which takes the administration of life and populations as its subject” (source). Science alone tells us nothing about Gandhi’s politics (he was also anti-vaccine, for example); we need social science as well, but this is a subject for which the BJP has had little patience.

There had been rumours that this Independence Day, the country’s 75th, the prime minister would announce the (preordained) success of India’s first human spaceflight mission from atop Red Fort, but the COVID-19 pandemic put paid to that. (Ahead of last year’s Independence Day, Indian Council of Medical Research chief Balram Bhargava made a fool of himself by demanding that Covaxin’s phase 3 trials conclude in just two months, presumably to give Modi something to take credit for on August 15.)

It would seem the newly demoted Department of Science and Technology (DST) is trying to do its bit to help. Starting this week, the DST has planned 75 weeks of events, until August 15, 2022, in what it is calling the ‘Aazaadi Ki Amrit Mahotsav’ (‘Nectar of Independence Mega-festival’). Together with the expected fixation on ’75’ and its mindless derivatives (e.g. “750 popular science articles”, “7500 participants”), the ‘proposed plan’ follows the usual template: announce big bang events, coerce participation from autonomous institutions, and make no effort to measure outcomes. But it still looks okay. 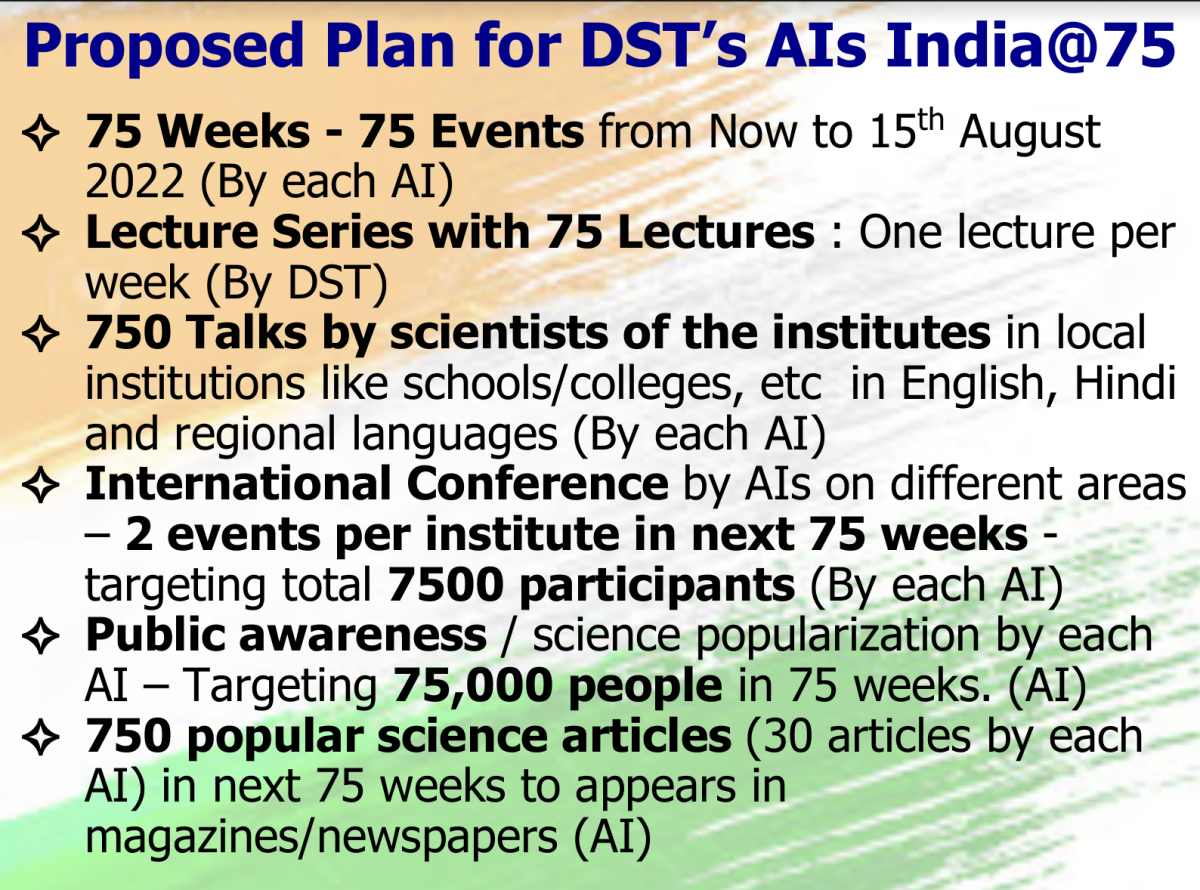 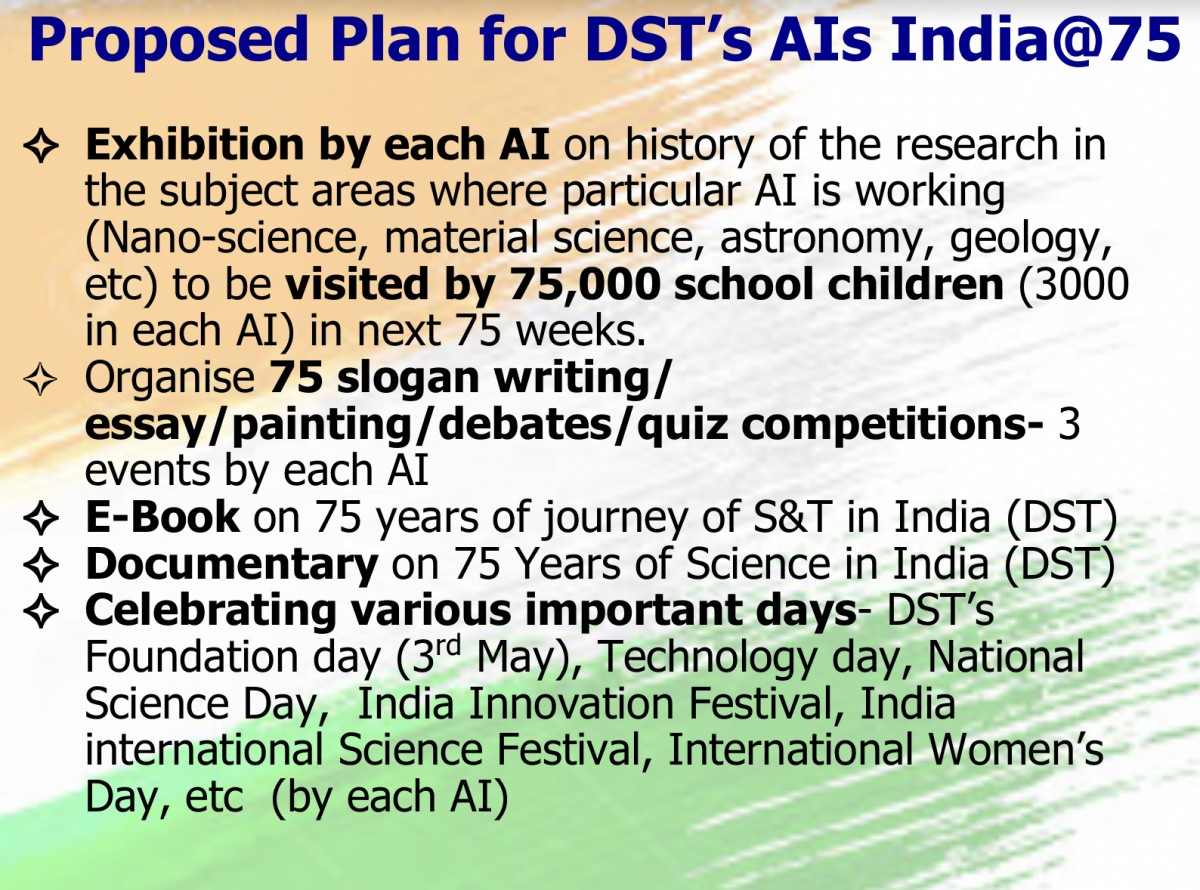 Here’s the catch, however: 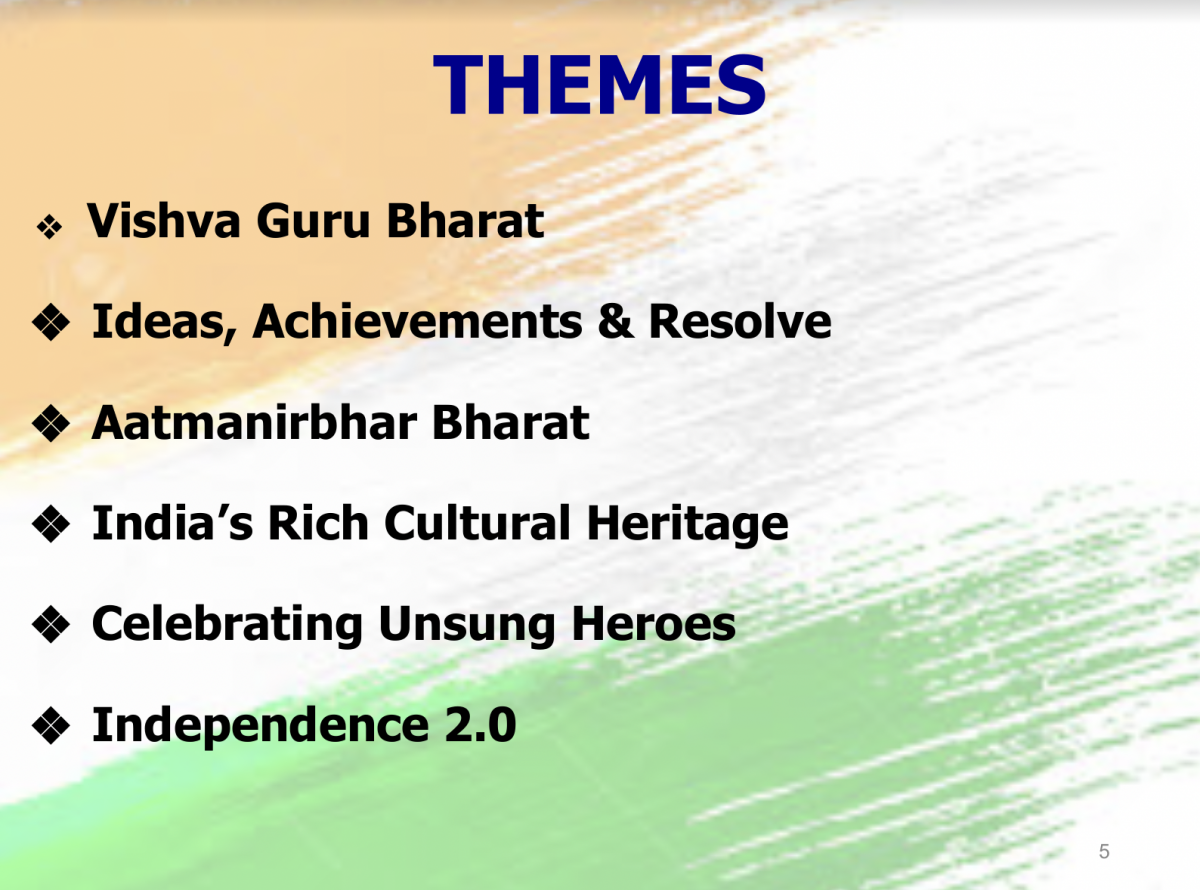 Aside from “Ideas, Achievements and Resolve”, whatever that means, none of the proposed ‘themes’ are scientific, least of all the first one: India’s stature (or Bharat’s) as the “Vishva Guru” is a lie. Even the point of celebrating unsung heroes deserves suspicion, since the government may dig up some obscure ideologue or sage and install him as the “real” originator of some old idea. And as ‘Independence 1.0’ was our freedom from subjugation, ‘Independence 2.0’ may just be a formal acknowledgment of our independence from critical thinking.