The capacity of political innovation is not exhausted in this country, certainly not in Bengal, where the word 'unnayan' (development) has taken an irreversible double connotation – material development, and power or muscle strength.

In the wake of the recent panchayat elections in West Bengal, the strongman of the Birbhum district ruling Trinamool Congress Party (TMC) spoke of “development” waiting on the road for the opposition candidates going out to file nominations. This was naturally interpreted as threatening the opposition to prevent them from filing nominations. It was also commented widely in the media that in this way the Trinamool had already bagged a sizeable percentage of seats returned unopposed. The ruling party was unfazed.

The opposition moved the high court on the ground that threat, intimidation, and coercion were the ways in which filing of nominations had been restricted. Finally, the matter reached the highest court of the land, and with the latter’s intervention, the panchayat elections took place on May 14, 2018. One section of the media made it that the elections had been held amidst unprecedented violence, while the government said that by and large the polling had been peaceful, and the number of deaths was far less than what was claimed, and certainly less than what happened in the Left Front days, specifically in 2003. All of this and the rest is a familiar and by now known story. The TMC won heavily, the Left and the Congress were wiped out, and the BJP though still a distant second, once more gained ground.

One of the interesting sidelights of the entire one month-long contention over the elections was a battle between a poet and the commissar. After Anubrata Mandal, the above mentioned Birbhum party chief, had boasted of unnayan (development), and anthromorphised what we call “development” (“development is awaiting the opposition on the r0ad”), poet Sankha Ghosh wrote a couplet titled, Mukto Ganatantra, (free democracy) to the effect, “Dekho khule teen nayan, rasta jure kharga haat-e dariye achhe unnayan” (Open your three eyes and see, development is standing on the road, axe in hand). And then the poet added, “All pay me obeisance, free democracy will spread everywhere today” (free translation). This was in reply to Mandal’s statement, “Opposition parties would not be able to file their nominations because ‘unnayan’ would be standing on the road blocking their way.” Ghosh is an eminent poet, is a Padma Bhushan, Jnanpith and Sahitya Academy honour recipient.

Mandal did not take the satirical lyric lying down. He shot back soon in course of an election speech in Purulia, “I know Rabindranath, Nazrul. Who is this poet? He can’t write. He is a liar. I have said, development is standing on the road.” Then attacking the BJP, he continued, “Isn’t development standing on the road? Go, ask people. They will say they have got something or the other. Isn’t that development?” Then he continued, “Poet, didn’t you see when Dilip Ghosh (state BJP chief) spoke of skinning people and applying salt and chilli? You shouldn’t be called Sankha, it is an insult to the word (which means conch shell), what did you do when Dilip Ghosh was saying that people would be sent to the crematorium?” 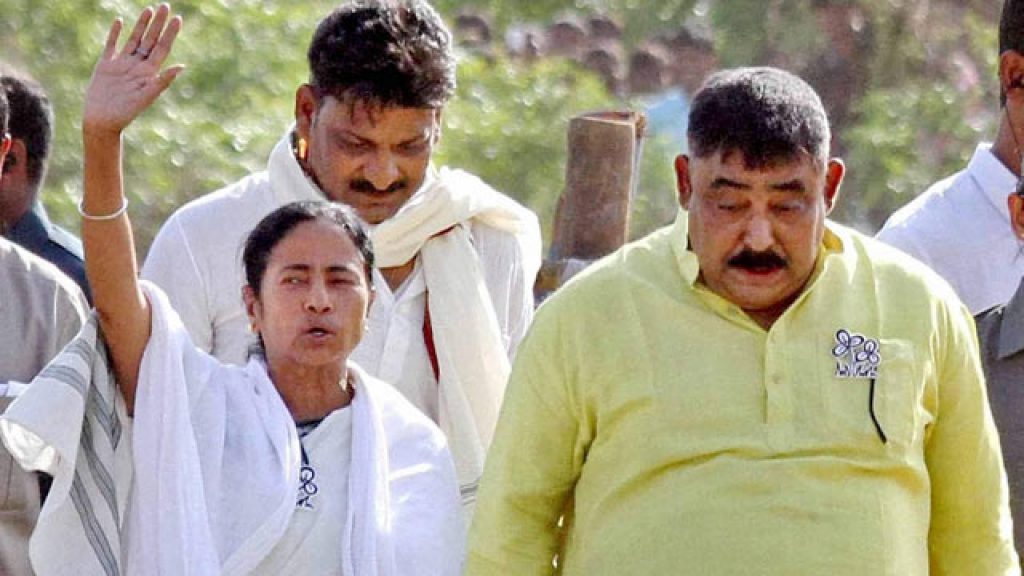 The poet kept silent. However, other literary figures were angry at Mandal’s remarks.  Another poet Mandrakanta Sen protested in rhyme, “So wretched is my country, so unruly is my state, the illiterate shout loudly, ignoring the poet”. The Left political leaders condemned Mandal’s attack on the poet, “We all bow our heads before Shankha Ghosh. And this man is asking who is he? This is misbehaviour and is not acceptable.”

However, by the time the angry exchange of words and rhymes had become public, “unnayan” (development) as a word had taken an irreversible double connotation – material development and power or muscle strength. The commissar had deployed the word “unnayan” repeatedly as a double entendre for development and muscle power, and while the poet had lampooned the double entendre, the assertion that opposition candidates coming to file nominations would find “unnayan” standing on the road had been able to carry many resonances which will refuse to die. “Unnayan” is a person, a thing, a materiality, and of course muscle power…

There is no doubt that Bengal’s poetic sensitivity has been hurt. Chief minister Mamata Banerjee’s task to keep her unruly flock in check is daily getting harder. She had repeatedly cautioned Mandal to restrain his language. She had greater reason, for she had repeatedly invoked the aesthetic, literary, and spiritual accomplishments of Bengal, and figures like Tagore, Nazrul, Vidyasagar, Vivekananda, to her mission of Bengal’s regeneration. The poet, she may also have felt, had alluded in his sarcastic lines to the chief minster’s blindfolded eyes when he had said, “teen nayan” – three eyes, which Goddess Durga has, and which perhaps alluded to Banerjee herself said to be donning the role of the goddess, the mother Durga… She, however, did not offer any comment, perhaps not to add to the controversy. But, whatever she may have thought individually of the episode, the vernacular tone and the style has by now engulfed the world of development in Bengal, in which power will play an increasingly significant role. It cannot be rolled back, it cannot be wished away. It too, or primarily, has become a matter of social struggles. Our aesthetic sensibilities will have to accommodate the rough, blunt, world of politics of claims and alliances.

This of course takes us to the ubiquitous question of power – power of muscle, media, language, money, government, party, bureaucracy, finance, ritual, and not the least, style. Will “development” be free of all these inflections?

I incurred the ire of Leftist critics when I had commented before and after the last Lok Sabha and Assembly elections that Bengal’s social trajectory and politics was taking Bihar’s way. Scholars, purists, and commentators proud of Bengal’s cultural legacy were angry that I had denigrated our heritage. But this and significantly the panchayat election, proves that the path Bengal has taken is remorselessly falling into a specific pattern. Let me briefly explain.

Development is individualised. It cannot but be. It is not a gift of bureaucracy, or a welfare state, or an ideology, or of even a party only. If its message is universal, it must be represented universally, through a leader who is universal. Development is embodied in a leader, who must be made universal. In this foundational politics of representation, it is not votes at stake, but development is at stake. Development must be represented among the people, and who else but an itinerant leader arguing for development among the lower classes embodies development? The message of development must reach the people – not merely in form of gospels through social media – but through innovation of a populist mode of governance, as part of which the chief minster has to continuously travel through the state and hold administrative meetings in districts away from the state capital, which has now exceeded 200 in number! This is just one instance of such innovation.

But since there are dark forces, who did not want development or failed to pursue development, development cannot but be contentious. It will imply attritions, conflicts, and will call for determination and autonomy of leadership. Thus communities, castes, groups, classes, towns and villages will have to be mobilised in this contentious process providing the requited support to the leader working for development. This is the model to be replicated from top to bottom, Kolkata to the district, from the muffasil to the village. If this is the grammar of power – the new normal of politics – then it also means two more things: first, it complicates the link to a past that legitimises the developmental mission and process today, and second, the link to money and other resources cannot be wished away. On both these grounds, the TMC is now on the backfoot, as the panchayat elections showed.

If the enlightenment of the 19th century and early 20th century speaks of a glorious past that has to be revived, hence the constant invocations of Tagore, Nazrul, Vidyasagar, through every possible avenue, then how can Mamata Banerjee justify the social violence in which her party is deeply embroiled? On the other side, if development means money, contracts, muscle, commission, etc., plus the illegal loot of natural resources, such as rampant sand mining, quarrying, etc., how can she keep her party clean of the greasy material that keeps the economy alive and is able to keep hundreds of poor people employed? Will the populist mode of reaching administration to the people be sufficient to ride the tiger of development? There is no doubt that she has succeeded to some extent to keep the paradoxes mute, but possibly time is running out for her, if she cannot innovate a Mamata 2.0. 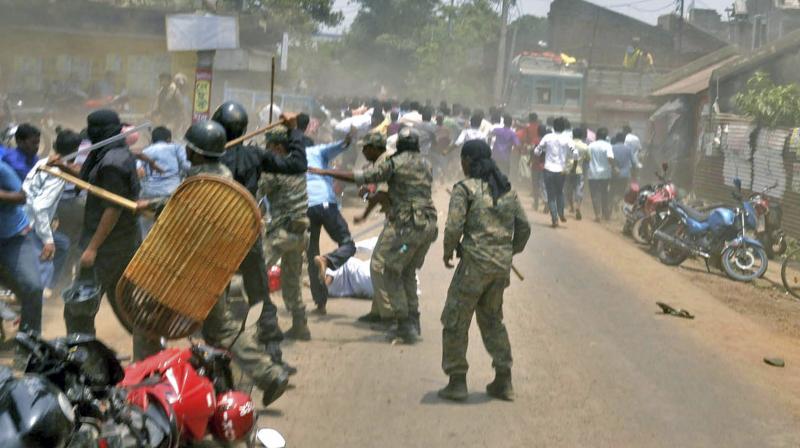 It is in the politics of development that votes will reflect the social conflicts that populist politics unleashes. Village battles will be even more bloody, acute, and contentious over resources. Credit: PTI

BJP is making inroads in this milieu. There is no point in saying that the Left and the Congress votes are going over to BJP, hence the latter’s advance. It is in the politics of development that votes will reflect the social conflicts that populist politics unleashes. Village battles will be even more bloody, acute, and contentious over resources. The number of TMC cadres killed in this bloody battle is 11, more than 50% of the total number killed in the election process (according to the chief minister, the number is 17, unofficial and other estimates put the number at 18). On the other side, at the lowest level of elections – gram panchayat seats – where the battle is the toughest, closest, hand- to-hand combat, community to community confrontation – the BJP has scored a significant presence. For instance, in the Junglemahal region, the BJP secured more than 300 gram panchayat seats out of 806 seats. It is not thus a case of only party violence – a kind of a simplistic image that the Left and the BJP would like us to believe.

Caste and community alliances are also changing slowly but surely. The intermediary castes making up most of the prosperous peasantry, rural traders, and broad sections of rural gentry, will try to grab as much as possible of the developmental process, and rob the poor. Already the Union government’s monetary cuts of various developmental schemes, like the NREGA, along with the burden of West Bengal’s own debt are making the state government’s pro-poor schemes difficult to continue. These schemes, along with improvements in social and material infrastructure, have paid dividends to the government. The rural and urban poor have given solid support to the ruling party. But for how long will this uncertain state of politics continue? Money, muscle, arms – everything is being mobilised and deployed by mightier forces and the poor will have to defend the gains. Can the TMC take the politics of populism to that extent of mobilisation? Going by the history of populism, the chances are slim.

Make no mistake. Social struggles will become more bitter and acute. Whether in this age of globalisation and neo-liberal growth, the poor can sustain their existence around a populist government is a crucial question. In Venezuela we have seen the limits of such politics. We can only say that the capacity of political innovation is not exhausted in this country, certainly not in Bengal.

The poet obviously took on the commissar on the latter’s ground – development. But do not underestimate the commissar. He knew what he was saying. He was reflecting the violent reality of development through which Bengal is making its way against neoliberal depredations.

Ranabir Samaddar is Distinguished Chair, Calcutta Research Group. He can be reached at ranabir@mcrg.ac.in