Design institutes across the country are brimming with eager students who can provide branding solutions, yet the government repeatedly turns to amateurs, ignoring previous lessons.

The Doordarshan logo was born in the studios of the National Institute of Design (NID), created by a student, Devashish Bhattacharya, for a classroom project under the guidance of professor Vikas Satwalekar. As a form, the logo is a perfect example of balance and has the intelligent use of whitespace. It’s inarguably a memorable icon for a channel that has produced quite a few Indian pop culture classics.

On July 26 this year, the state broadcaster announced a competition, open to all Indian nationals, to redesign the iconic logo. Shashi S. Vempati, chief executive officer of Prasar Bharati, which runs the Doordarshan and All India Radio, said, “The Doordarshan brand and the logo evokes nostalgia among a certain generation of the country. Today, the county’s population largely comprises people below 30 years of age and they don’t share the same memory that the earlier generation has of Doordarshan.” So the obvious solution, according to the seat of power at India’s oldest broadcasting corporation, was to announce a competition to replace an iconic specimen of Indian design history.

But ask any creative professional whether it’s a good idea to launch competitions to solicit design or branding solutions, and they will tell you it’s a practice that is, albeit ubiquitous, penny-wise-pound-foolish. And you don’t have to look too far for examples. 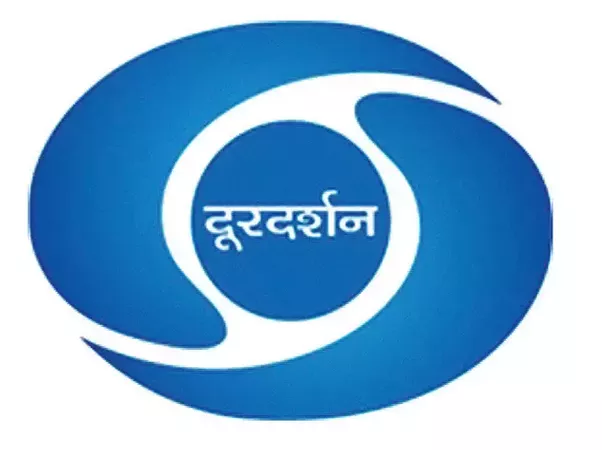 In 2015, the Vasundhara Raje-led Rajasthan government got ready to launch ‘Resurgent Rajasthan’ – a two day investor event that saw participation from bigwigs like Adani Group chief Gautam Adani, Reliance Group chairman Anil Ambani and Mahindra Group chairman Anand Mahindra. The point of the event was to draw investment worth approximately Rs 3 lakh crore, according to state industry minister Gajendra Singh Khimsar. The Rajasthan government left no stone unturned, except one – the brand itself. And so, they launched a logo competition inviting entries from across the country. There was a complicated application process with various criteria that needed to be satisfied – GIF, JPEG and TIFF file formats with various sizes. Sounds so professional, right? What could go wrong?

A couple of weeks after the deadline, all applicants received an email informing them that the competition had been suspended and that the government was going with a design agency. All those GIFs, JPEGs and TIFFs amounted to nothing. All that time spent by designers, earnestly trying to earn a client, wasted.

Another example is that of the design for the Right to Information (RTI) mark. A month-long design competition was launched which fetched just four submissions. Yes, four submissions over a month. Eventually, the RTI commission realised the futility of the exercise and approached NID. Graphic design faculty Tarun Deep Girdher took over the project and designed the beautiful mark that is used today. A lot of time and money could have been saved had these government bodies approached experienced design agencies or institutes like NID in the first place rather than launch competitions.

The problem here is that many people sitting in high chairs in government buildings still don’t understand what a brand is. Whenever a new initiative is introduced, branding is an afterthought and the solution to the problem is assumed to be a logo. That does anything but create a brand. It barely even solves the problem. And that is because, as Itu Chaudhuri of Itu Chaudhuri Design best said, Logo ≠ Brand. A logo, although essential, is just a part of the brand story. Various elements come together to create a brand. Indigo airlines, a prominent modern-day Indian brand, is an apt example.

The airline’s brand can’t be boiled down to a singular element like its logo. The large swathes of blue, punctuated by quirky one-liners in a distinguishable custom-made typeface, and the deep blue stewardess uniforms and pilot attire designed by Raghavendra Rathore all come together to form the image of the Indigo brand that we know. And it is no easy feat. All the elements like the typeface, colours, the icons and the photography are designed in tandem, and various iterations are tried and explored to achieve a visual harmony.

A logo competition may perhaps just given you a graphic symbol that is as good as a sticker that is slapped on contraband products. It’s a missed opportunity to create a brand that can resonate with it’s audience – and our government misses it most of the time. 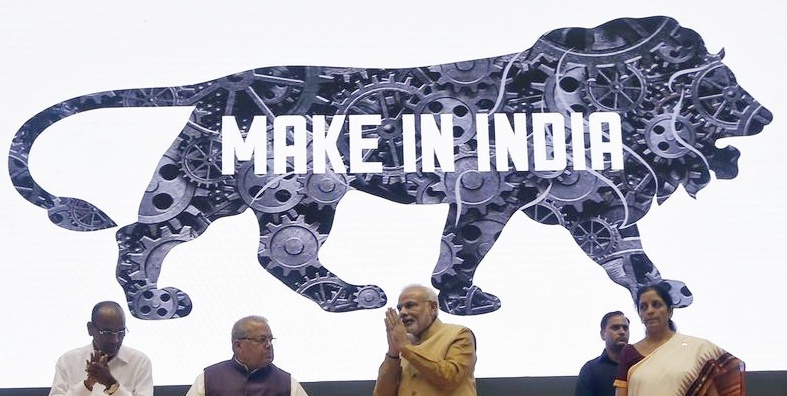 Prime Minister Narendra Modi (centre) with Nirmala Sitharaman (right), minister of state for commerce and industry, and Kalraj Mishra and Anant Geete (left) at the launch of Make in India in New Delhi September 25, 2014. Credit: Reuters

The only time the branding of government initiatives is well executed is when professionals are called upon. Case in point – the Make in India brand. Made by the same people behind the Indigo brand, the good people of Wieden+Kennedy, led by the charismatic V. Sunil. An interesting visual style and a dynamic treatment of the now famous lion mark make for a very striking identifier for the prime minister’s pet project.

Why ignore our designers?

Another shortcoming of a design competition, government or otherwise, is the shortchanging of design professionals in the country. One of the biggest culprits is the Mahindra group that has launched competitions to design everything, from Nick Heidfeld’s race suit to driverless car concepts. The latter had a grand prize of a Flipkart voucher worth Rs 5000. Most of the applicants end up being design students or young freelance professionals who are looking to add ribbons to their portfolio rather than assign value to their work.

The end result of such competitions is a plethora of options to chose from, most of which is white noise filled with rushed, diluted solutions made with the intention of grabbing eyeballs rather than solving a real design problem. The irony is that the government doesn’t have to try out such ridiculous ideas to cut costs. NID, a government institute, is brimming with eager design students guided by experienced faculty, who would provide fewer but more effective solutions. There are also private institutes like Shrishti and DJ Academy in Coimbatore that produce talented designers. Why then invite amateurs to bring down the Indian design standard?

The simplistic shape of the Doordarshan logo mimicked the human eye. A wonderful metaphor for a loved TV channel that brought quality television to Indian families. Perhaps a better and more appropriate solution is trapped in some designer’s head somewhere who would participate in this competition. But looking at the track record, it will most probably be replaced by a shallow mark that will be mundane at best and forgettable at worst.

Shantanu Salgaonkar is the Art Director at Communication Arts, a design magazine based in the US.